Regular readers and forumites will know that we recently put out a call for questions to ask of Corsair's product manager for cases and cooling, Michael Hooper, in a community-driven style interview. We received a great response - thank you for all your questions!

Michael was kind enough to give us a full hour of his time, and this allowed us to cover a lot of interesting ground on small form factor cases especially, but also on more general case and cooling enquiries. It does also mean that the resulting interview, even when edited for length, is a bit of a beast, so it may be worth putting the kettle on before digging in. Please give us any feedback you have on this style on interview too - more like it are certainly possible in the future. And with that, we give you Matt's interview with Michael Hooper, who you can see in person in the below video.


bit-tech: Hi Michael, please introduce yourself to our audience – what is your current role at Corsair, your background there and your history as a PC enthusiast generally?

Michael: I’m Michael Hooper, Corsair’s Product Manager for Cases, Cooling, and Fans. I started Corsair as just the PM for Cooling and Fans, but recently picked up Cases. I’ve been building PCs for the better part of the last 20 years, and I started overclocking and building performance PCs with the release of the Intel Celeron 300A. Before joining Corsair, I went to business school at the University of Minnesota – Carlson School of Management – and prior to that I was an Infantry officer in the United States Army.

bit-tech: Great. I want to start with small form factor, in particular mini-ITX, but let's contextualise it first. How much of a niche is it?

Michael: We're taking ITX percentage of motherboard sales as the market size for ITX – those are the only data we can pull out to represent it – and it is very niche. Four or five years ago, it was about five percent whereas now it's 10 percent. But it is a higher price market as opposed to micro-ATX which is usually seen as a value segment. bit-tech: Have you seen recent growth?

Michael: Between 2014 and 2015 it stayed at roughly 9-10 percent. I think that's less about demand and more that nobody's given a compelling reason to go SFF. Even we're a culprit of not really providing an SFF solution for mini-ITX. The 250D and 380T are very large chassis for mini-ITX systems but they had to be ATX PSU compatible, have two 3.5in and two 2.5in drives and fit a H100i. The compatibility list is really what determines the size of the chassis from a Corsair standpoint rather than just a how small we can make it.

Michael: We do that through both surveys and market data like PCPartPicker. We have a relationship with them where we can pull up builds proposed on Reddit. It allows us to get a context for the people who want to do a mini-ITX build and see what they're putting in it. Now, we didn't have that data when we were developing the 250D and 380T cause PCPartPicker has only been really popular in the last couple of years and cases are on a 12 to 18-month development cycle. The 250D came out in 2013 so that was really a 2011/2012 idea case.

bit-tech: Within the ITX niche, what are people buying? Is there a trend towards smaller cases?

Michael: Either the user is purpose building something exceptionally small or they just like the idea of having a mini-ITX motherboard that's smaller than an ATX build but where they can still do custom liquid-cooling, have as many drives as they want and have a gaming machine without limitations. There's really no nice middle ground between a very small chassis like the Ncase M1 and something like a 250D or NZXT Manta.

bit-tech: One of the ideas raised by our community was that case manufacturers aren't utilising smaller components as well as they should. Does Corsair have plans, beyond Bulldog, to release SFX-only cases now that you have your own SFX PSUs [due in early Q2, for anyone wondering]? bit-tech: From an ITX perspective specifically, are 3.5in even disks still necessary?

Michael: People typically need at least one, mostly just for bulk storage. Some people like to create DIY NAS systems with FreeNAS and would want to have four drives, but at least one is usually good enough. They'll have their 3.5in storage drive and their OS and gaming drive as an SSD.

bit-tech: With the AMD R9 Nano mini-ITX Nvidia GTX 970 readily available, will Corsair be designing cases that don't have such a massive GPU clearance?

Michael: It does allow us a lot of leeway to make smaller, smarter cases than in the past because we don't have to sacrifice any performance whatsoever to have that size. Beforehand, you had to, but the rest of the industry is sort of removing those obstacles so when we design a new case going forward we can get really small without sacrificing usability, expandability and power. It's a great time for mini-ITX in that we can go small without having to compromise. bit-tech: One of the biggest themes from our forums was a sense that, generally speaking, mini-ITX is not being done properly, or at least only half-heartedly. What are your thoughts here?

Michael: I would agree with you wholeheartedly. I've only been at Corsair for a year and a half so both the 380T and 250D came out before I joined so I can sort of speak without baggage about those two. They're rather large chassis and they're really inefficiently spaced for what they do. Now, they have tonnes of expansion options, but nobody's really putting serious thought into how to make a smart mini-ITX case that's small, does everything users need it to do and is really easy to build in. If we want to give the user experience that somebody has in one of our full tower chassis in a mini-ITX form factor, we have to put a lot more time into it and when mini-ITX is only 10 percent of the market, even if we capture the entirety, it still doesn't make quite as much business sense. That's why I feel the industry as a whole, thinks of it half-heartedly. If it's such a small audience, we don't have to give a whole lot of attention to it.

Now, personally, I have a different opinion about that because basically as long as mini-ITX has been around I've tried to build mini-ITX systems. As PM for cases now, I'm putting more emphasis on mini-ITX because I feel the reason it's so small is there isn't a good solution. We need a killer case to make people think about mini-ITX in a different light like, 'wow, I can do this with mini-ITX, this is how beautiful it'll look, this is how easy it is to do everything in it', and then we're pushing SFF rather than just saying, 'oh, this person is already buying mini-ITX, I might as well have a case for them to put it in.' Give customers an incentive to buy mini-ITX motherboards rather than an incentive to buy a mini-ITX case. 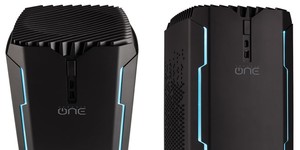 RGB 120mm fans and a new tempered glass case with RGB fans are inbound from Corsair. The Sova wants a seat on your sofa - can it make keyboard and mouse on a couch comfortable?