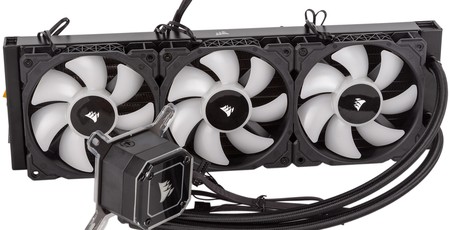 Corsair has been a driving force behind all-in-one liquid coolers for over a decade now, and its early steps in the RGB Everything trend have arguably paid off, as it now has a very wide range of RGB-enabled hardware all capable of being synchronised through iCUE, which has developed into a decent bit of software. Today, that range of hardware gets a little wider with the introduction of yet another family of Corsair all-in-one coolers. 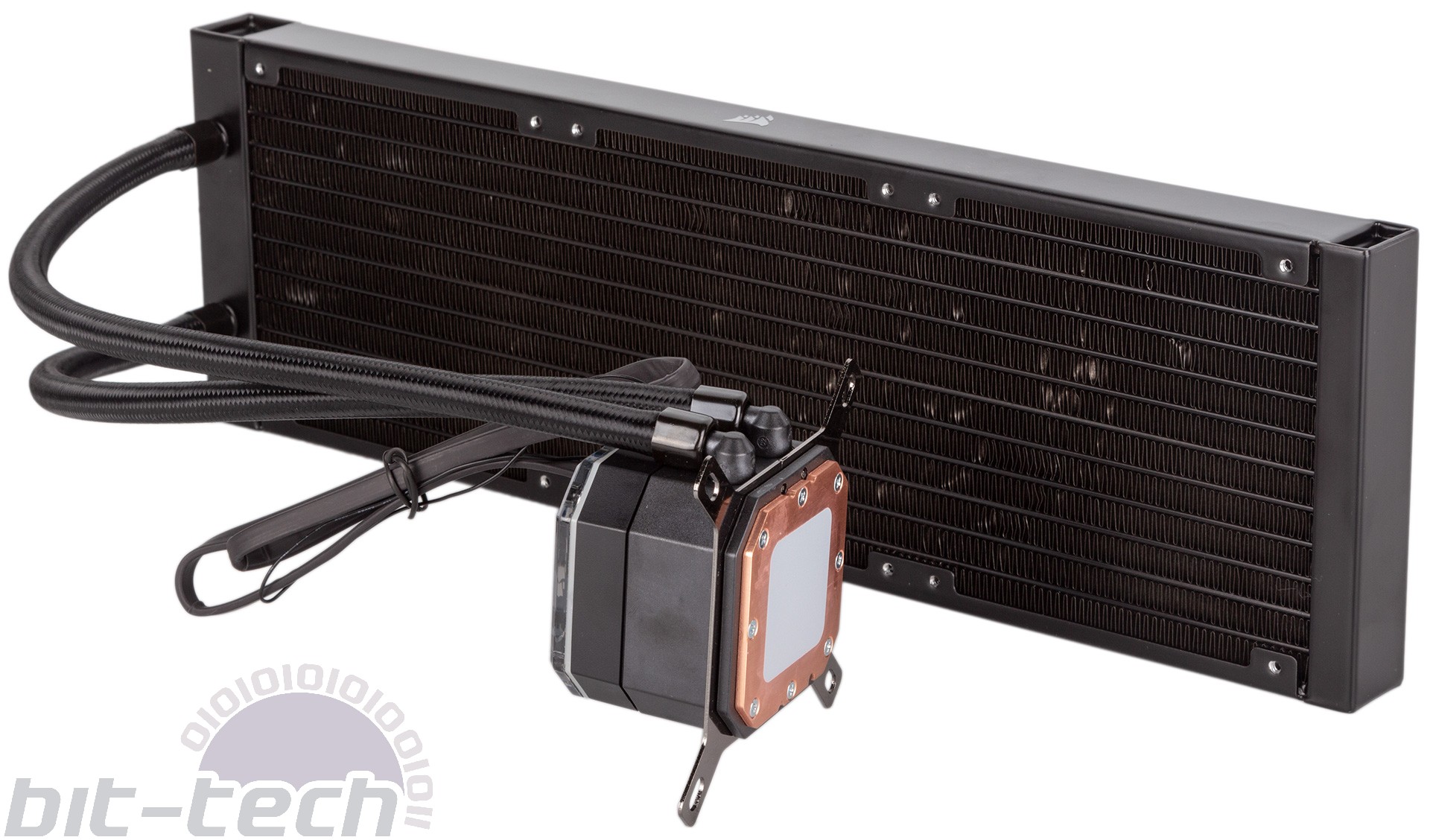 It’s a ridiculous product catalogue at this point, and our understanding is that all of the above coolers will continue to be sold, meaning users will now have up to five versions of the H100i to choose from. To help tease out the differences, we’ve put together this table:

As well as being the first Corsair AIO in 360mm format with RGB on both the pump and fans (that surprised us too), the Elite Capellix is very much a feature-focussed launch. The CoolIT platform is carried over from the RGB Platinum and iCUE RGB Pro XT, with Corsair confirming that the pump chamber, coldplate, and fluid flow design remain unchanged. The pump speed and fan curves are newly tweaked to be more performance oriented, but we are not expecting anything new in terms of cooling capabilities. 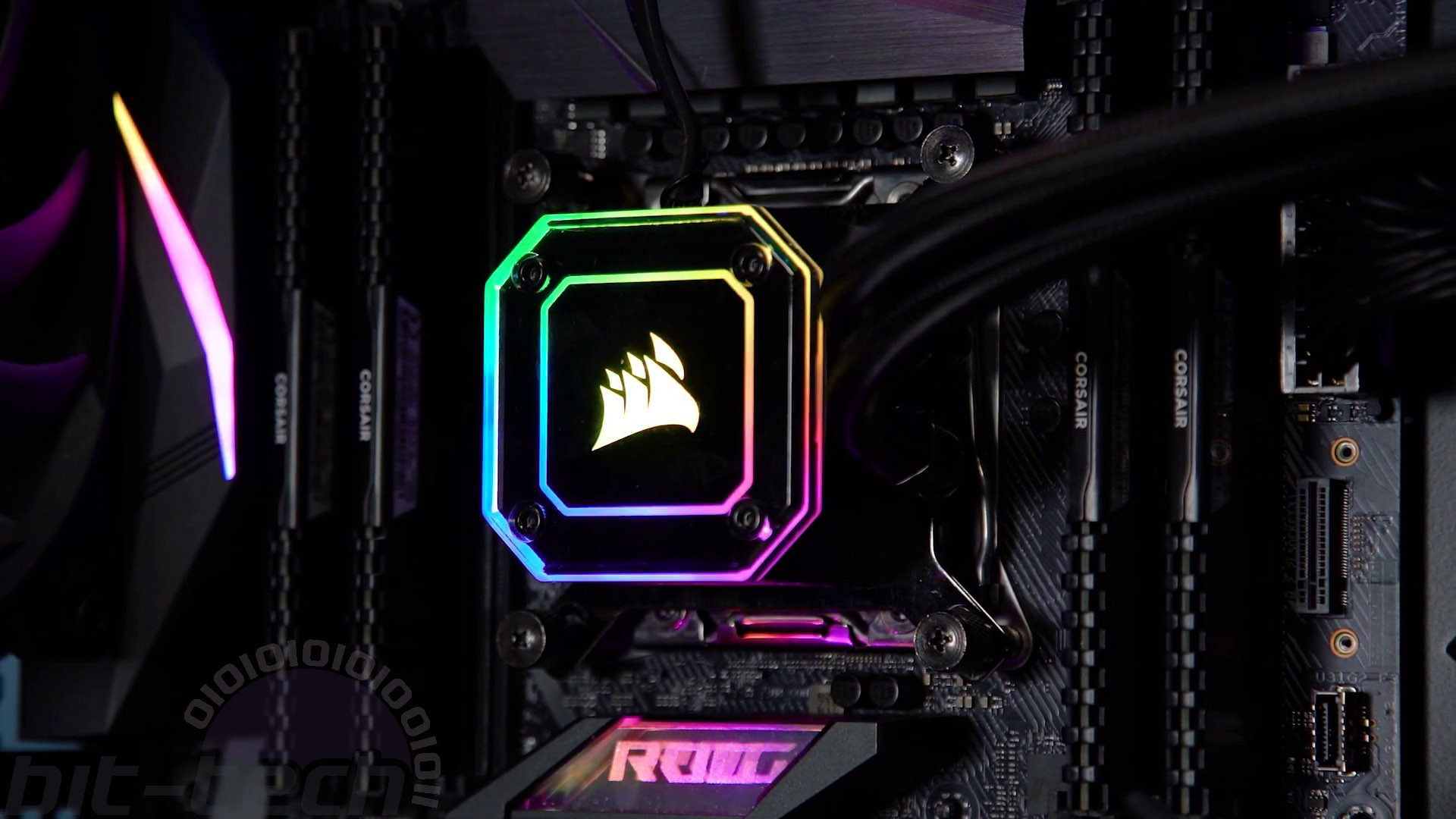 The new features are all related to RGB and ecosystem expansion. The main change is a pump head that now incorporates Capellix LEDs. Co-developed with Primax, these are brighter, smaller, and more efficient RGB LEDs. While they’ve been used elsewhere in Corsair’s product stack, today marks their debut in the all-in-one liquid cooler space. There are 33 crammed into the pump head (more than double the previous amount), and the end result is very bright lighting with smooth colour transitions and an overall lovely effect. The inclusion of an alternative pump cap is a nice touch given the target market, and though the supplied plastic Allen key is flimsy it just about does the job and prevents overtightening.

You also get a new iCUE Commander Core bundled in the box. This allows you to leverage the iCUE software to control the pump speed, fan speed, and the RGB lighting. While that in itself is nothing new for Corsair AIOs, the Commander Core has six fan headers and six RGB connectors, thus granting you expandability. Its design is inelegant and cheap feeling, but it’s functional by nature and intended to be hidden from view, so keeping costs down here makes some sense. What’s more irritating is that it has no magnets, so you’re forced to use the included 3M tape to stick it in place – not ideal if you tinker frequently and may have to reposition things.

The Commander Core is powered by a SATA 12V connector and runs data over a standard USB 2.0 header. One side has a bank of six four-pin fan headers, and different fan curves can be applied to different fans.

The other side has a row of six addressable RGB connectors, and these have four pins instead of the usual three. This is thanks to an extra data signal pin (data in and data out), which helps with timing more complicated effects that move from one fan to the next, for example. The connector for these is not actually proprietary – it’s just not all that common. It’s a locking Dupont connector, and Corsair uses both the three-pin and four-pin versions in its products. Since it’s not proprietary, this means that custom cables can be used to allow the Commander Core and iCUE to control non-Corsair RGB products. There are some limitations, and it’s a topic outside the scope of this article, but for those interested such cables do exist (unofficially, of course).

The build quality of the cooler itself is good, and the tubing is especially nice thanks to its coating and impressive flexibility – it’s very resistant to kinking. The aluminium radiator is 27mm thick on all three varieties, ensuring case compatibility will be high. 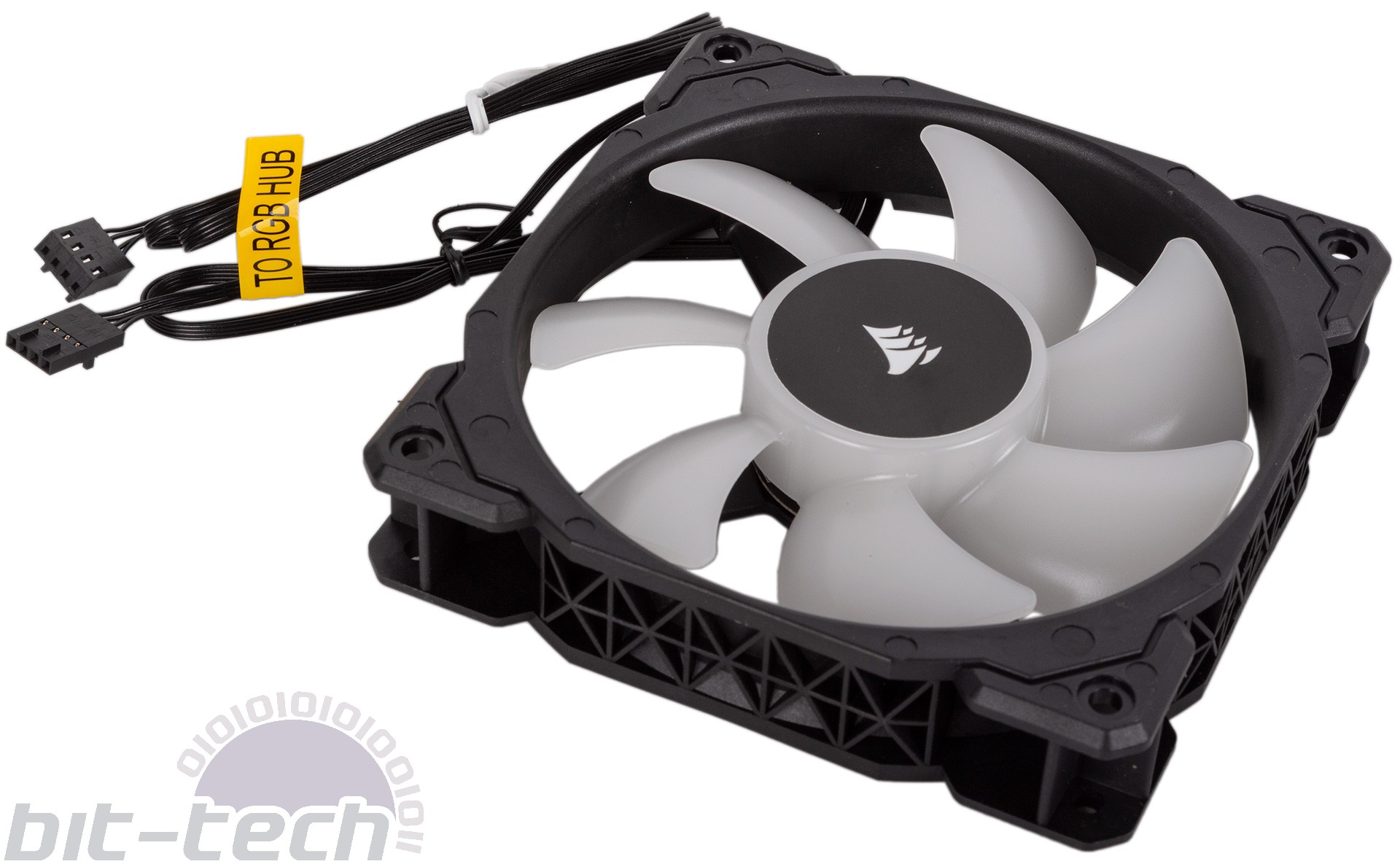 As with the RGB Platinum coolers, Corsair deploys its ML RGB PWM fans, which come with a speed range of 400~2,400 RPM. That’s a very wide range that will give users a lot of flexibility on the noise and performance scales. Corsair has also doubled the LED count from four to eight per fan, but these are standard LEDs rather than Capellix ones. The RGB and fan cables are separate, so there’s plenty of cabling to deal with. 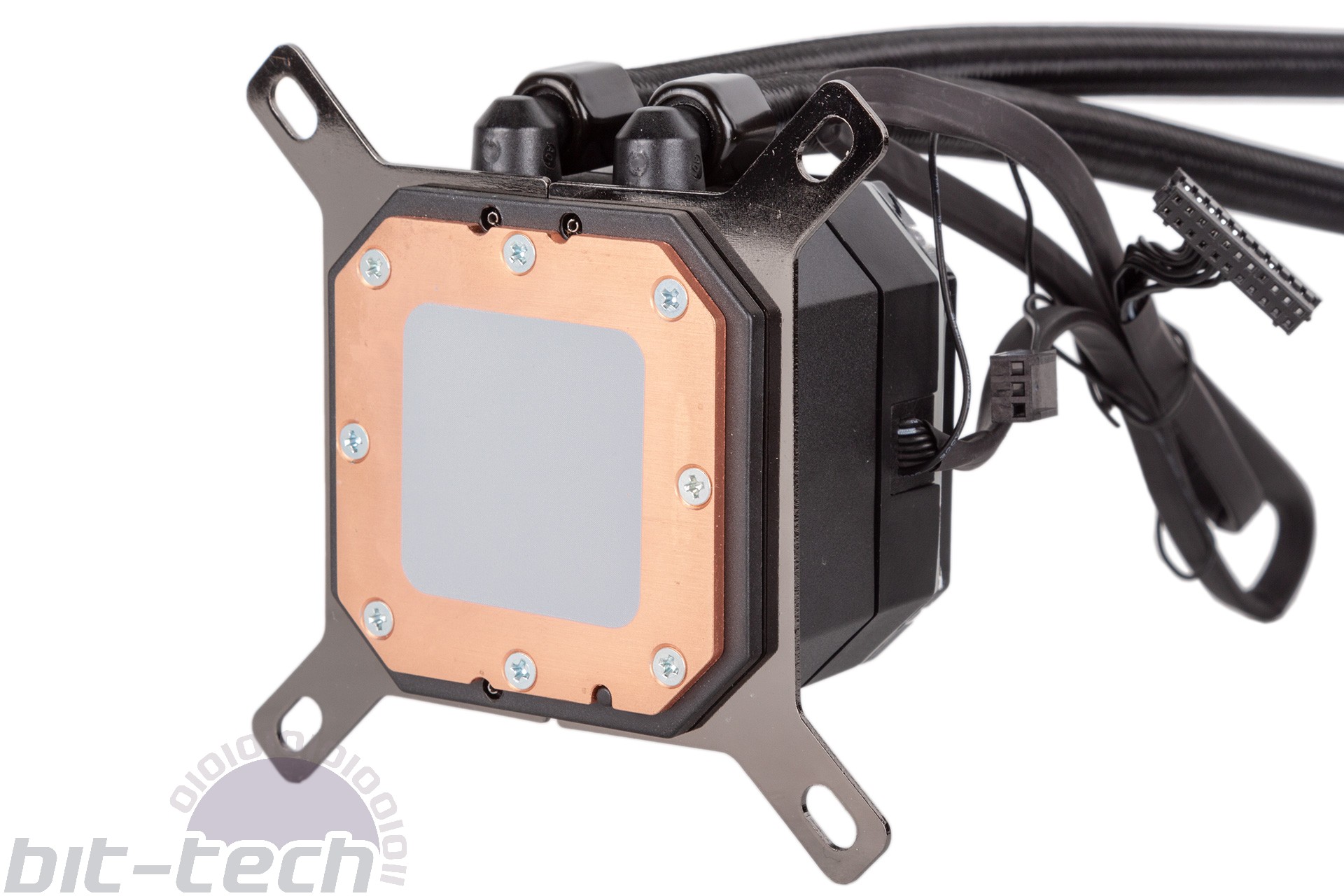 The iCUE H150i Elite Capellix is compatible with all modern sockets including Intel LGA 1200/115x and AMD AM4 for mainstream CPUs and Intel LGA 20xx and AMD sTR4/sTRX4 for the high-end desktop CPU crowd. The mounting mechanism for these remains unchanged, and this is a good thing. In every case it’s very fast and easy to get a secure mount, and Corsair’s how-to video is an accurate representation of what’s going on. The thermal paste is pre-applied, but annoyingly you don’t get any extra in the box, so you’ll have to source your own if you ever need to remount. 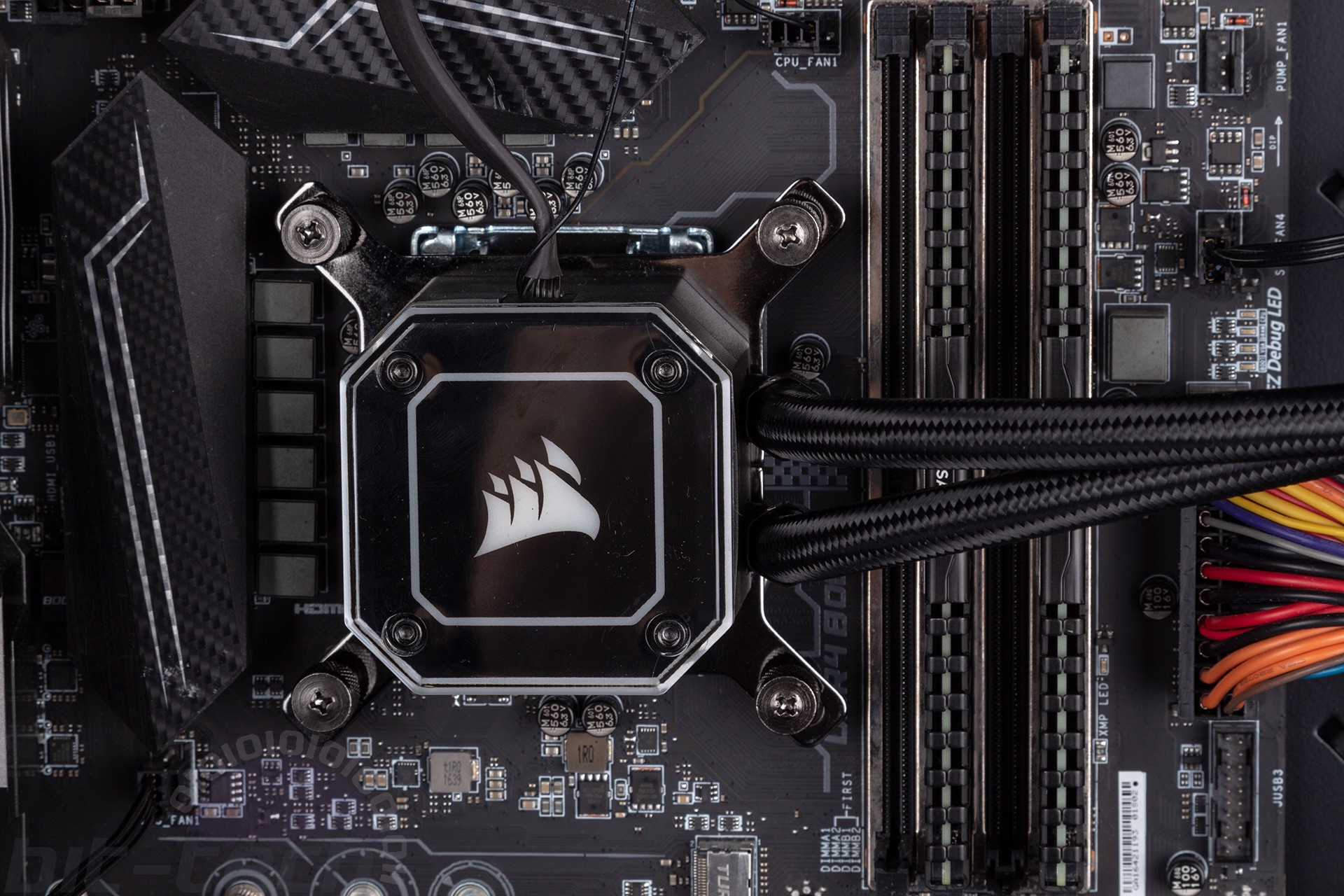 The pump head has two cables coming from it. The larger one ends in a 24-pin connector that you plug directly into the Commander Core. The second one is a simple three-pin header that you can connect to the CPU_FAN header to prevent your motherboard from panicking about there not being a CPU cooler attached. Of course, many motherboards can be set to bypass this safety check anyway, in which case you can leave this cable disconnected and route/hide it as you see fit. 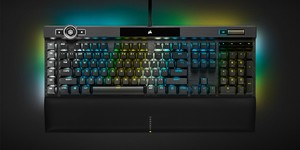 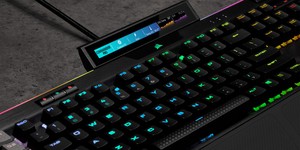 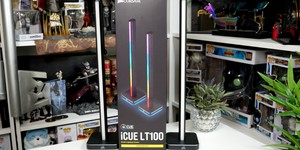 More illumination for your PC.