The case market is a crowded one, but Thermaltake has some of the more interesting chassis out there, very often due to the fact that they are very task-focussed. For example, the Core P5 is designed to be a an open-air case that's great for water-cooling and is wall-mountable. It's great at this but lacks dust filters and is very large, but we've nevertheless seen some stunning builds using the case.

Similarly, the Core X series, such as the Core X1, is designed to offer huge water-cooling support. That's certainly true, even if the Core X1 is the largest mini-ITX case we've ever seen as a result - in fact, it could quite easily house an ATX motherboard given a few modifications. However, today, we're looking at something very unique and original from Thermaltake. In fact, its design is based on an idea that practically no other manufacturer has really had the guts or the foresight to work with. Click to enlarge
The Core G3 is classed by Thermaltake as a slim ATX chassis. This is for the simple reason that rather than offering full ATX compatibility, as you'd expect given it can house ATX motherboards, it's actually limited to SFX PSUs. Now, a few years ago there weren't many options if you wanted a decent, high-wattage SFX PSU, but these are commonplace now, with Thermaltake, SilverStone, Corsair and Be Quiet! all offering models over 300W, and some over 600W too. Click to enlarge
Despite this, very few manufacturers have offered SFX-only cases, despite the space saving design of these PSUs. SilverStone and Lian Li have certainly dabbled quite extensively and there are one or two others from Parvum Systems and Corsair, but many of these are simply aimed at making mini-ITX cases smaller, rather than using the smaller SFX PSUs to reduce the size of micro-ATX and ATX cases. Click to enlarge
The Core G3 houses the PSU at the rear of the case in the base as usual, but thanks to the fact SFX PSUs are less than 130mm across compared to 150mm for ATX PSUs, combined with a very slim chassis design with no cable routing behind the motherboard tray, the case only measures 140mm across. Despite this, though, it's able to house an ATX motherboard, a full size graphics card and even 240mm radiators and custom liquid-cooling systems.

With these options on the cards, Thermaltake had little option but to offer a high-airflow case, and the Core G3 has a large mesh at the front and another in the roof, as well as a heavily perforated rear end. The roof has a magnetic dust filter, while the front ports and buttons sit at the top of the front panel. The latter is removable, revealing another dust filter and providing access to the storage bays, with another filter in the base catering for the PSU and another large mesh vent. Click to enlarge
The case sports a large side window and includes rubber stick-on case feet that replace the out-of--box configuration's feet and allow you to use the case in desktop mode, with the window pointing upwards. In tower mode, you obviously get the benefit of a tiny footprint that's barely half of what your standard tower would demand - potentially useful if you don't have a lot of desk or floor space. 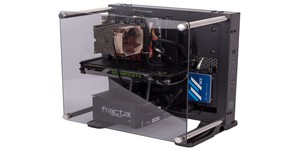 This wall-mountable, water-cooling friendly mini-ITX case is all about showing off - does it justify its £105 price? 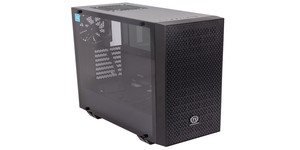 Two tempered glass side panels and 360mm radiator support for £60.