There are plenty of options now when it comes to building a powerful mini-ITX system, be it in terms of cases, motherboards or short PCB graphics cards. In fact, apart from a few PCI-E slots and, of course, mulit-GPU capability, there's little to gain from going for a full-size system except losing desk or floor space.

The Maximus Impact range is perhaps the ultimate statement that mini-ITX isn't just here to stay, but considers itself to be on par with larger form factors in nearly all areas. In fact, given the shorter distances between components, mini-ITX motherboards are very often faster than their larger counterparts too, if only marginally.

The latest Impact includes most of the same features we saw with its Z87 and Z97 predecessors, including an array of overclocking and testing tools, the latest storage standards, some seriously beefed up power circuitry and a discrete sound card.

Starting with the VRM daughterboard, there's a total of 10 power phases - six for the CPU, two for the DRAM and two for the iGPU. It's a similar beast to previous models with front and rear heatsinks, although the rear plate also acts as a means of insulating the rear of the PCB against short circuits - in the early attempts at using the daughterboard, for example with the P8Z77i-Deluxe, there was just a neoprene strip here so the Impact is very much an evolution of those early mainstream boards. This is all removable, however, so there's scope for slapping one of EK or Bitspower's gorgeous full-cover waterblocks on when they arrive, which they will. Click to enlarge
The sound card is removable too - just to emphasise the fact that it's a proper discrete model. You can of course ditch it if you have a high-end USB setup and need the 16x PCI-E slot for your graphics card. It's based on the usual Realtek ALC1150 but wth a HyperStream ESS9023 DAC, Nichicon capacitors and a dedicated clock, as well as electronic shielding. This is paired with Asus's Sonic Studio II, which is a slightly more advanced audio software suite than you'd find with your average Realtek-based onboard audio and includes an equaliser, smart EQ, virtual 7.1 surround sound and a host of other gubbins. Previous incarnations have performed well above average so we have high expectations for the Impact's audio. Click to enlarge
There's a single LAN port courtesy of an Intel I219-V gigabit controller and thanks to the inclusion of an Intel Alpine Ridge controller, you get USB 3.1 Type-A and Type-C ports too, although the HDMI port is your standard 1.4 flavour and that's all you get by way of dedicated video outputs as the rear I/O panel is otherwise rather packed. There's a dedicated tweaking/testing module that includes an LED post code display as well as power and reset buttons and Asus's USB BIOS Flashback button as well as a CMOS clear button. There's a vertical WiFi module too and the rest of the area is taken up by the vertical audio card and USB stacks. Click to enlarge
There's another addition here too, though - a U.2 port, which supports PCI-E 3.0 x4 devices. As you may have read in our preview of the Impact, this has proved quite a controversial move. U.2 devices are scarce - only Intel's 2.5in 750 SSDs are currently compatible and even the supply of those is quite limited - but are easier to use and cool than M.2 SSDs, which can suffer from heat issues if tucked away in the tight confines a small mini-ITX case. U.2 also takes up less room on the PCB, which is important for mini-ITX and when we spoke to Asus about the issue, it told us that heat from the M.2 SSD can also get dumped onto the motherboard's PCB, potentially causing issues there. Click to enlarge
However, there's also nothing inherently wrong with the latest M.2 drives and the likes of Samsung's SM951 and 950 Pro also offer fantastic performance and NVMe support too, but as it stands you won't be able to use them here. This is certainly a drawback - U.2 devices will inevitably be expensive, as the Intel 750 is already retailing considerably higher than the SSD 950 Pro when it comes to £/GB. Software-wise you get the usual ROG suite including the Macro key recorder and player Keybot II, which allows you to use standard keys to deal with macros - useful if your keyboard doesn't have any. Sonic Studio II gives the Impact an edge over your run-of-the-mill Realtek-based software with features such as perfect voice being added into the mix as well as a more attractive user interface. Finally, you also get RAMDisk - a slightly tweaked version of Asus's other similar feature RAMCache. Here, you get dynamic memory allocation rather than hogging a fixed portion of system RAM, but you're also able to select the files you want to dump into your system's memory for super-fast storage. You can put entire programs in there or just large game map files, although we saw limited benefits in real world testing with Photoshop, for example, compared to using an SSD. 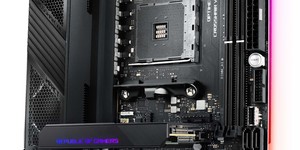