There's not much to be said here as we don't have any comparison numbers for the Crosshair VI Hero just yet. However, we can offer a little comparison between it and its sister board - the Maximus IX Hero. M.2 and SATA speeds are very similar, so if you just want a single M.2 SSD then you'll lose nothing by opting for the Ryzen-friendly board. Audio performance was actually slightly above that we saw with the Z270 board, with a marginally better noise level in RightMark Audio Analyzer, so outside of CPU-dependent performance, AMD and motherboard manufacturers have really done well to make sure the AM4 platform is a match for mid-range Intel products that use the Z270 chipset. In terms of the Crosshair VI Hero itself, we did run into some niggles and this seems to be the case with many AM4 boards - not just those from Asus. We tried two identical boards and neither recovered all the time from overzealous overclocks, at least compared to its Z270 counterpart, sometimes needing a CMOS reset. It's possible this will improve with more optimisation and tweaked BIOSes. Also, we've been unable to get above 3,000MHz on the memory using our usual Corsair Vengeance LED 3,200MHz kit. The one AMD provided - a standard Vengeance kit, works fine at 2933MHz so we used this in the review instead. We've heard reports from all the major board manufacturers that they haven't been given a lot of time to work on optimising their AM4 products and Asus has stated it's working to get new BIOSes out shortly. Incidentally, Overclockers UK advises speeds up to 3,000MHz for Ryzen systems as it has found above this support can be flakey too so we're not alone.

With audio and next-gen storage performance on par with Intel-based rivals plus all the usual Asus ROG features, the stage is set for a battle between Intel and AMD, and the Crosshair VI Hero is a great example of a board that will be able to take the fight to Intel. There are some niggles you'll need to be aware of such as RAM speed compatibility and if you're gunning for a maximum overclock then you may get familiar with the CMOS clear button, but for now, this is one of the best-featured AM4 boards out there from Ryzen CPUs. 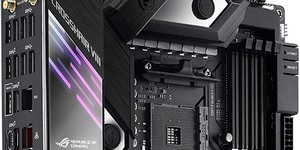