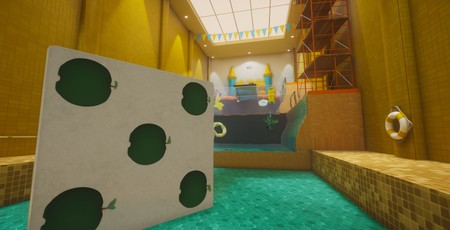 Superliminal is an interesting case study in the interplay between systems and theme. It starts out as a puzzle game about perspective and ends as a perspective game that sometimes involves puzzles. It has a wonderful, brain-flipping central mechanic, but doesn’t always know what to do with it. Its story starts out as pound-shop Portal and ends as something unique and touching. It’s not always a great game, but it is never less than fascinating. The premise, such as I gathered it, sees you play as a patient at an experimental sleep-treatment centre that specialises in a unique style of dream-therapy. The entire game takes place in a sequence of dreams that loosely mimic the layout of the treatment centre. You’re guided through these spaces by the gentle voice of Dr Glenn Pierce, and the somewhat less-gentle tones of a female AI. I’ve already mentioned the game’s debt to Portal. But surrealist walking sims like The Stanley Parable and What Remains of Edith Finch are equally important touchstones.

We’ll talk more about Superliminal’s style later. For now, let’s focus on the thing that immediately makes Superliminal appealing – its core puzzling mechanic. This lets you pick up an object and automatically adjust its size based on its relative perspective to the nearest wall you’re facing. You know that bit in Apollo 13 where Tom Hanks puts his thumb over the Moon? Well, according to the rules of Superliminal, doing that would actually make your thumb the same size as the Moon. In effect, all you’re doing is making objects bigger and smaller. But Superliminal does this seamlessly such that the size of the object doesn’t appear to have changed until you actually put it down. Suddenly, the cheese-wedge you picked up off the table is now the size of a three-bedroomed bungalow and shakes the ground when you drop it. It’s impressive how you can keep increasing the size of an object without it turning into one big smeared texture. I can only assume Superliminal’s objects have more levels-of-detail than Pac-Man in 4k.

The initial puzzles are all framed around this key mechanic. Make a bunch of child’s building blocks bigger so you can climb up to a higher platform. Make a chess-pawn smaller so you can fit it onto a button in a notch carved out of the wall. It’s worth noting that Superliminal lets you pick up and drop any “active” object at any distance, which is both a necessary component of its perspective-warping play, and important to bear in mind when solving puzzles. Unfortunately, Superliminal quickly runs out of ways to keep “make it bigger/make it smaller” interesting. Or at least, that is how the game’s next half-hour presents, as its following few levels switch the onus away from the core concept to a series of other optical illusions. One involves lining up 2D images in rooms to turn them into 3D objects. One involves Deceptive Dice™. One just involves darkness. All of this is still quite fun, but it feels like the game is awkwardly scrabbling for new ideas rather than layering them into the core puzzling concept. The result is a sense that you’re not getting the game which the opening sequences led you to anticipate.

As it turns out, the perspective-altering puzzles return later in more dramatic form, although Superliminal still never really delves deep enough into its central mechanic for my liking. What doesn’t help is that the range of objects you can interact with is limited. Indeed, more than a few puzzles devolve into clicking on the environment until you find the one thing you can actually interact with. One or two conundrums are downright irritating, including one involving blocked doors that had me ready to put my fist through the screen. But like Portal, it’s the storytelling and theme that take centre-stage through the mid-to-late game, and what maintains its quality even when the puzzles start to wobble. Superliminal shares that same light-hearted, goofy humour, right down to the AI tannoy announcements that explain potential death-scenarios in the way a supermarket might announce an in-store discount. The game is filled with gently chucklesome gags, some of which are scripted while others are visual and environmental. The choking, wheezing noise fire-extinguishers make when they run out of CO2 made me giggle every time, as did the weekly cafeteria menu in the game’s nightmare sequences that read “MURDERMURDERMURDERMURDERMURDERMURDER BEANS.”

Beneath this jokey veneer, however, Superliminal exhorts a genuinely positive and wholesome message about problem-solving and not giving up. As you progress through the game, you’ll stumble upon reassuring audio-logs from Glenn Pierce. Initially these are played for laughs, but gradually they become more earnest, and you come to realise the game really does have something to say about how to approach difficult situations in life, that its whole notion about viewing problems from new perspectives is not just a clever mechanical gimmick, but the whole point. I also want to applaud Superliminal’s closing half-hour, which rivals Remedy’s Control for its beautiful slideshow of surrealist imagery. In these final sequences, the whole structure of the game is deliberately broken down, leading you through these warped, twisting black-and-white spaces where the level logic becomes truly strange and dreamlike. It’s a wonderful denouement, striking and memorable in all the right ways.

Good as is concept it, Superliminal’s lack of puzzling depth means it doesn’t quite reach the same heights as Valve two mind-bending masterpieces. That said, it is consistently enjoyable, frequently funny, and ends on a proper high. If you’re looking for a good way to spend a cold winter evening, you could do far worse than this.