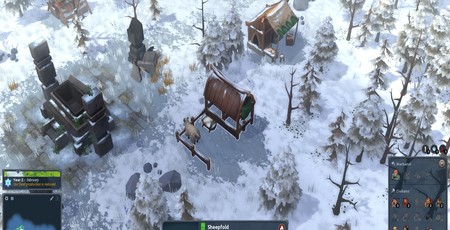 Northgard is the nicest game about Vikings that you'll ever play. It feels a bit odd to say this, considering that Shiro Games' RTS doesn't exactly shy away from the realities of settling a far-flung, half-frozen Arctic wilderness. Northgard simulates the biting winters of Scandinavia, the perils of exploring distant lands, and the fact that the Vikings were quite a prickly bunch with a tendency to lay fire and sword to anyone who wasn't in their “tribe”. But all of this, even the fire and sword bits, are presented in such a colourful, laid-back, pastoral manner that I can't help but think of Northgard as anything other than lovely. Yet there's more to Northgard than a pretty face. Within its fairly traditional structure of erecting buildings, exploring territory, and conquering your opponents are some subtly ingenious ideas, and considering how hard it is to innovate within the RTS' rigid constraints, this is very impressive.

A typical game of Northgard sees you assume the role of one of several Viking tribes, each of which has slightly different abilities that lets them play in a unique way. All of them, however, have the same basic goals to achieve. You need to construct buildings, sustain your population, explore the map, and defeat your opponents according to whatever the victory condition of the map is (such as conquest or trade war). All of this is standard RTS fare. But it's in how you do these things where Northgard's differences are revealed. For starters, you can't just construct buildings wherever you like. The procedurally generated map is divided into regions which must be colonised before you can build anything in them. This is achieved by removing any hostile opponents or wildlife in the area and then spending a certain number of resources to assume control of the area.

As well as providing additional building space, each region contains a unique resource to exploit or treasure to find. But with every region you colonise, the price to acquire the next one increases. So you need to decide which regions are the most important for your colony to sustain itself. Do you colonise the region with the pond full of fish you can harvest for food, or the region with the tomb you can raid for riches? Such little dilemmas are built into many aspects of Northgard. Units, for example, are produced automatically from your town centre. All your citizens begin life as Villagers, who can build and repair structures and will collect food from the ground around them when idle. But you can assign them more specific roles linked to the buildings you construct. These roles include scouts who open up new regions for you to colonise, woodcutters, farmers, and miners who acquire basic resources, several kinds of warrior, and more specialised jobs such as Healers and Traders. Of course, for most of the game you'll have more jobs than villagers, and every job you assign that doesn't relate to food production will reduce your overall harvest. This means you need to assign jobs very carefully, adjusting to whatever needs are the most pressing in the moment.

Adaptation is a key theme of Northgard. It's clearly evident in the game's premise of conquering new and uncharted lands, but the theme is also present at a systems level. Resource production is constantly in flux due to changing game conditions. Villager production, for example, is reliant on Happiness, which is produced by specialised buildings like taverns and events such as territory expansion. Northgard will also occasionally throw a random event at you, like an earthquake or a rat infestation that will have you scrabbling to shore up your social infrastructure. Where the concept of adaptation is most evident, however, is in Northgard's Winters. For three months of Northgard's year, the land is coated in a blanket of snow and ice. During this time your food production plummets, wood-burning goes up, and your warriors are less effective in battle. Winter can end the game for players who expand too quickly or spend resources callously. To survive, you must stock-up on food and wood over the rest of the year, which means that every decision you make to buy more territory or construct new buildings comes with the question of whether you'll need those resources in a few months' time.

Describing all of these cleverly conflicting systems probably makes Northgard sound terribly stressful. But it isn't. Indeed, many of these things actually contribute to making it such a warming and pleasant game. Winters may be harsh and devour your supplies, but it's also a time to slow down, reflect, and plan your movements for the next year. Even in the summers, when activity is abuzz, you can only venture as far as the areas that your scouts have already mapped. What's more, those newly opened territories might contain a powerful enemy or some other surprise that forces you to rethink your approach. Northgard is about as far removed from the build 'n' rush approach to gaming as a real-time strategy can get. And this is a big part of what makes it so enjoyable. Its Dark Age production line is intricate and easily upset, and even the slightest nudge can result in sweeping changes for your colony. Consequently, you're encouraged to take your time and plan your actions carefully and only send out warriors to attack your opponent when you're sure that you're ready, as strong fighters are a luxury that only the most successful colonies can afford.

The strategic core of Northgard is a wonderfully crafted thing, but it does have a few rough edges. Managing individual villagers can be quite fiddly. Unless a villager is in the same region as a building foundation you place, you have to find a villager in the game world and direct them to build it. Also, while the construction side of the game is extremely elaborate, the combat and conquest side of the game is very basic, usually boiling down to the number of units on each side. I also have a few quibbles about the presentation. Generally the game looks fantastic. I love the use of bright colours and lightly brushed textures to create a painterly, slightly abstract portrayal of the game's environments. Unit models are quite blocky and unattractive, however. By far the weakest element of the game, though, is the storytelling. The campaign tells a fittingly Norse tale of betrayal, vengeance, and shifting clan-on-clan feuds. Structurally it works well enough, shifting you from one mission to the next, and it finds plenty of variety of play within those missions. But the writing itself is pretty watery, failing to strike a consistent tone or voice.

I doubt these issues will do much to dampen your enjoyment of Northgard's subtle yet delightfully clever strategy systems. It's also nice to see an RTS that rewards careful and adaptive planning rather than who is most au-fait with the keyboard shortcuts. They say it's grim up North, but I wouldn't have it any other way.