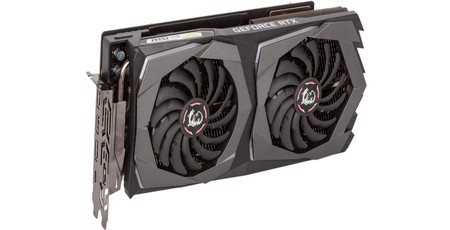 Via cooler and clock speed variations, MSI has a whopping nine RTX 2070 cards in its roster, but sitting proudly at the top of the stack is the RTX 2070 Gaming Z. This card could hardly be more different to the Palit RTX 2070 Dual that we looked at for launch; whereas that £460 card was basically a vehicle for delivering the TU106 GPU to customers for as little money as possible, the £600 RTX 2070 Gaming Z is MSI going all-out on clocks and features. Pricing is clearly very high, but it is similar to what we see from other flagship partner RTX 2070s. It is also £50 more than the RTX 2070 Founders Edition, which we sadly haven’t been sampled with. 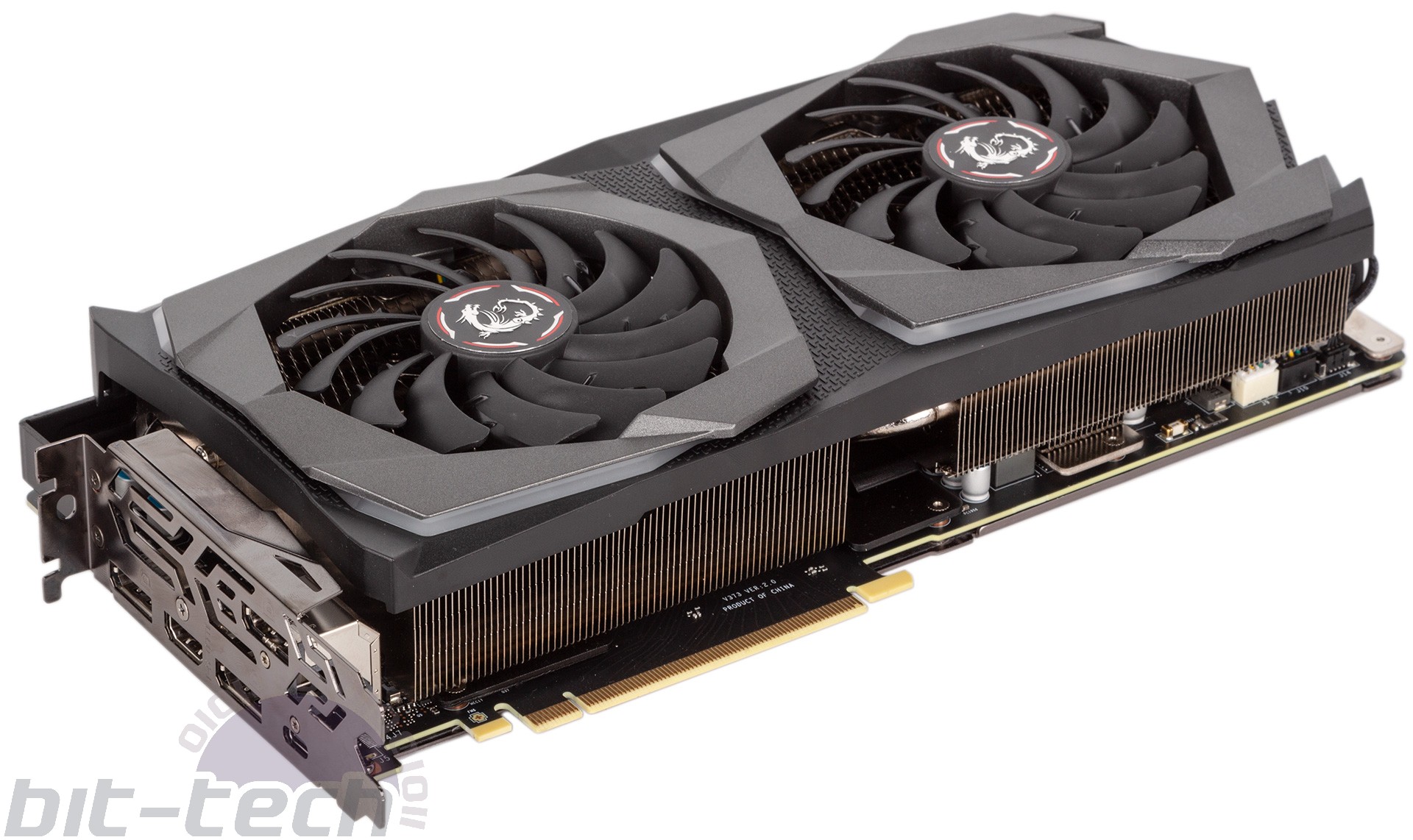 The RTX 2070 Gaming Z is very similar to the Gaming X card, differentiated only by having an even higher boost clock of 1,830MHz, which is 210MHz/13 percent more than reference. That’s a very sizeable difference, and there are very few cards on the market clocking in this high, but it does come at a significant power cost, as the reference TDP of 175W rises here to a whopping 225W, which matches the Founders Edition of the more powerful RTX 2080. Despite this, the memory is unfortunately left at stock, but this seems to be common across the offerings.

Perusing the specs of this card, we noticed it was listed as having the TU106-400A GPU rather than the TU106-400 GPU that stock speed MSI cards were listed with. While Nvidia refused to comment on the difference (and MSI has since removed any reference to it...), we’ve learned directly from MSI that this single-letter difference distinguishes between varieties of the TU106 GPU that can be factory overclocked by partners (400A) and those that can’t (400). The binning process is done by Nvidia, which has not communicated any real reason for this new methodology and has not detailed what the binning process entails to its board partners (or at least not to MSI).

While it’s long been the case that partners have both overclocked and stock speed offerings of the same GPU, to our knowledge this is the first time Nvidia has pre-binned its GPUs and restricted what can and can’t be done with the resultant differently-labelled chips. It does seem that there are similar differences for RTX 2080 (TU104) and RTX 2080 Ti (TU102) GPUs as well, but at least as far as RTX 2070 goes, any stock speed card is likely to be using TU106-400 while overclocked ones by definition have to be using TU106-400A, which likely has a higher silicon quality to one degree or another facilitating higher potential overclocks. The silicon lottery will always play a part, of course, but this does introduce the potential for more tangible differences between the two types of cards.

From a consumer perspective, it’s a poor decision for this not to be more obvious given that both types will be sold under the same ‘RTX 2070’ product name. While the physical silicon is the same, the characteristics of -400 and -400A are clearly different enough to warrant different treatment by both Nvidia and, by necessity, its partners, so it’s fair to ask why this difference is then hidden in (and removed from) spec tables and disguised by product names.

Back to the RTX 2070 Gaming Z, and it’s a beast. Weighing in at a massive 1.485kg, the metal anti-sag bracket it comes with isn’t just a nicety, it’s a necessity. While most cases nowadays can cope with 300mm+ graphics cards, the height of 155mm may still put a strain on some. Furthermore, the card’s cooler extends beyond dual-slot limitations, making it effectively a triple-slot card when it comes to usable expansion slots. 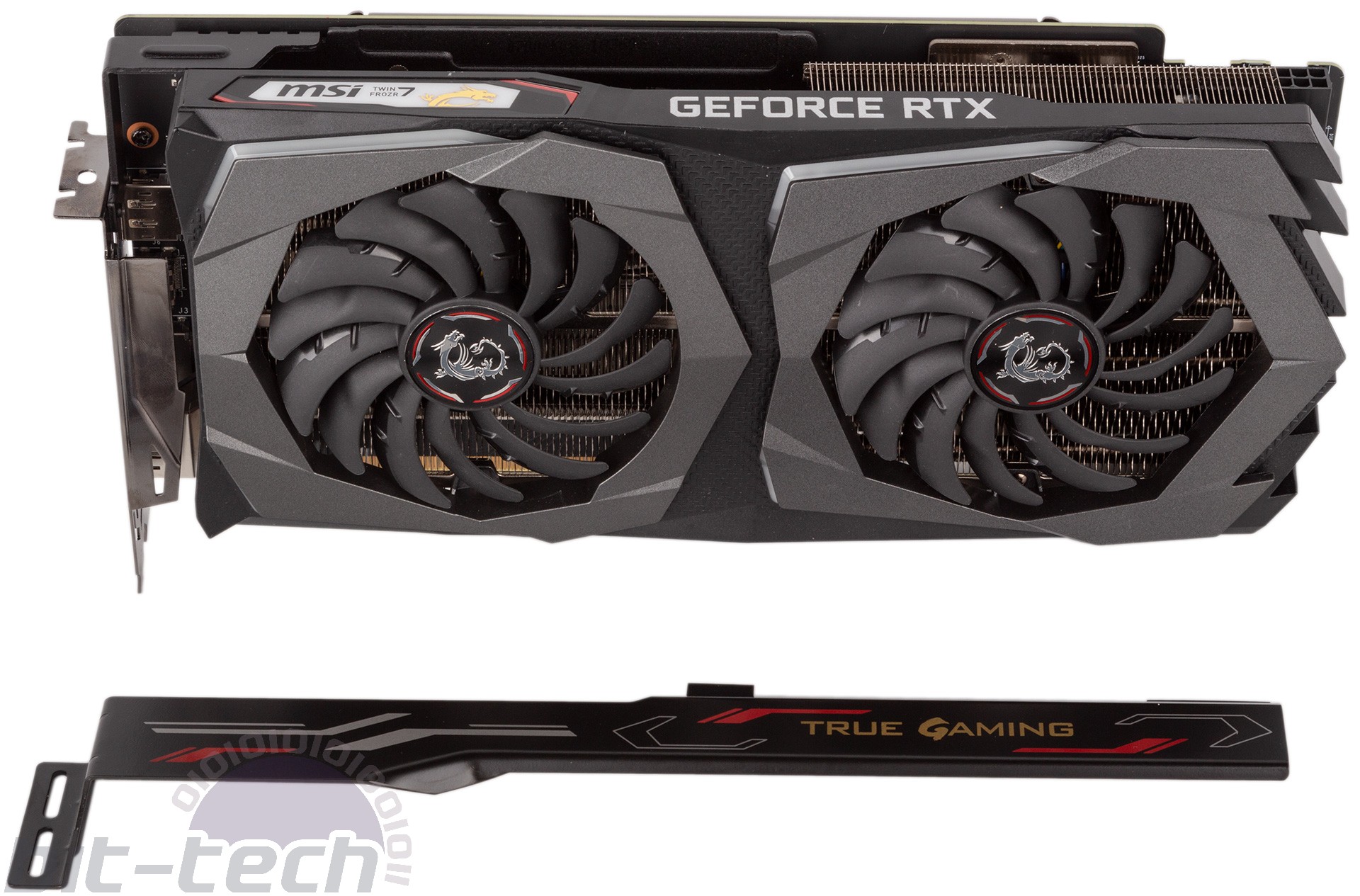 While you still get some very small red highlights (still unnecessary in our opinion), MSI has finally come around to the idea of keeping the colour scheme (nearly) neutral for RGB-enabled products such as this. The greys and blacks will match any lighting users choose to implement for the RGB strips found on both the front fascia and top edge. As usual, these are controlled via the MSI Mystic Light application and thus able to be synchronised with other compatible MSI or third-party hardware.

We’re fond of the two-tone brushed metal backplate MSI uses, and via thermal pads this also helps to dissipate heat rather than just being for aesthetic and structural purposes. Sadly, the main cooler shroud is hewn from plastic rather than metal – unfortunate on so premium a product.

With a 225W TDP, a single eight-pin PCIe connector like the Founders Edition has would have been stretched to its absolute limit, so the additional six-pin one makes sense. You’ll find both neatly indented, meaning power cables shouldn’t add to the already massive height.

We haven’t seen any variation from partners on the display outputs, and the MSI RTX 2070 Gaming Z continues this tradition. Three DisplayPorts, one HDMI, and the USB-C VirtualLink connector make for a great combination. Note that the RTX 2070 doesn’t support SLI, so no NVLink connector is present. 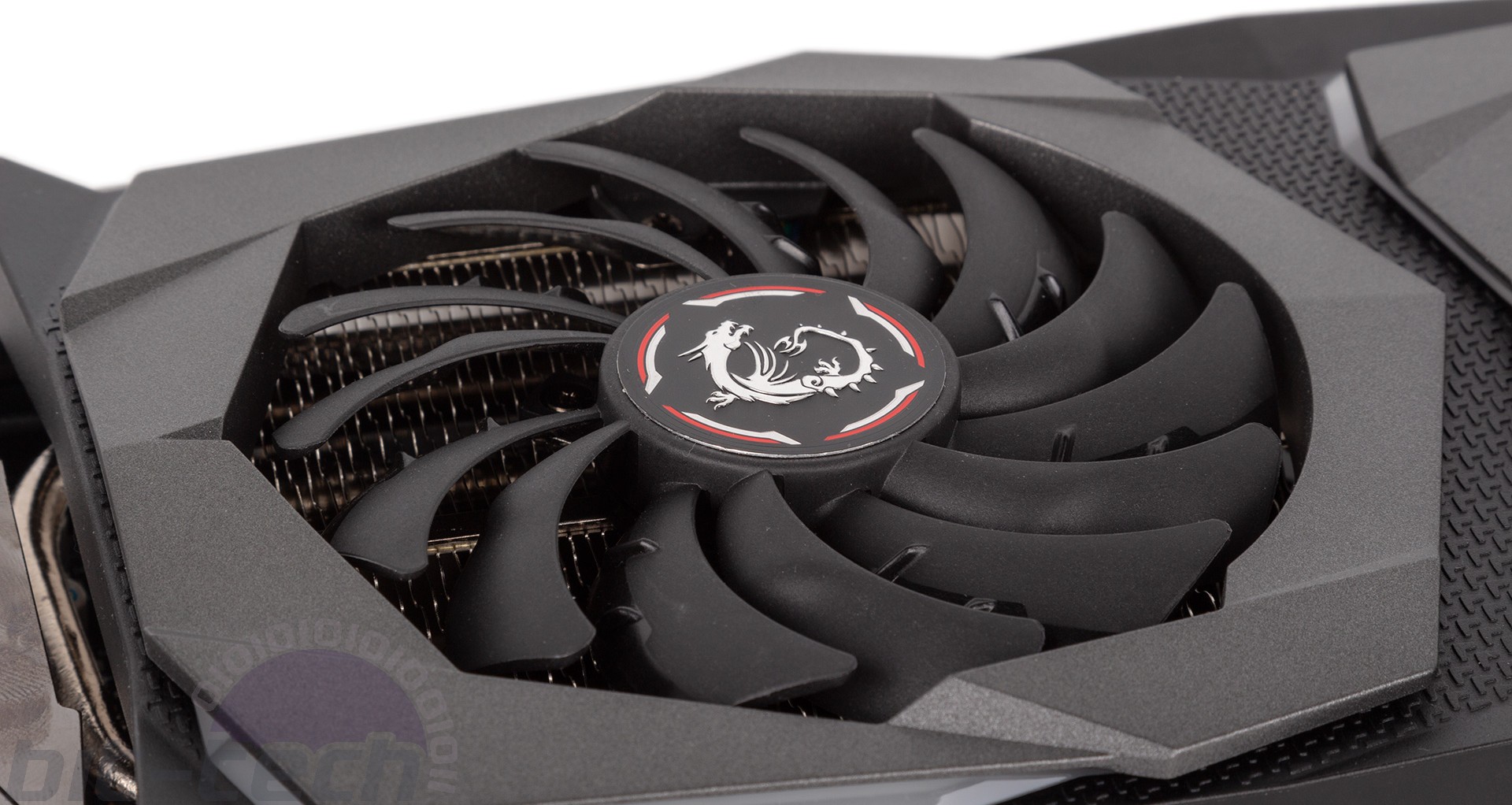 As is tradition for MSI Gaming cards, this one uses the company’s Twin Frozr cooling solution, which has now made its seventh-generation debut. First up on the list of improvements are the two fans, upgraded now to Torx 3.0. As before, these use alternating blades – one to generate airflow, one to push it downwards – and also sport double ball bearings within the motor. They spin in the same direction, and support for Zero Frozr simply means that the fans are semi-passive and will thus remain completely off in idle and low-load scenarios. 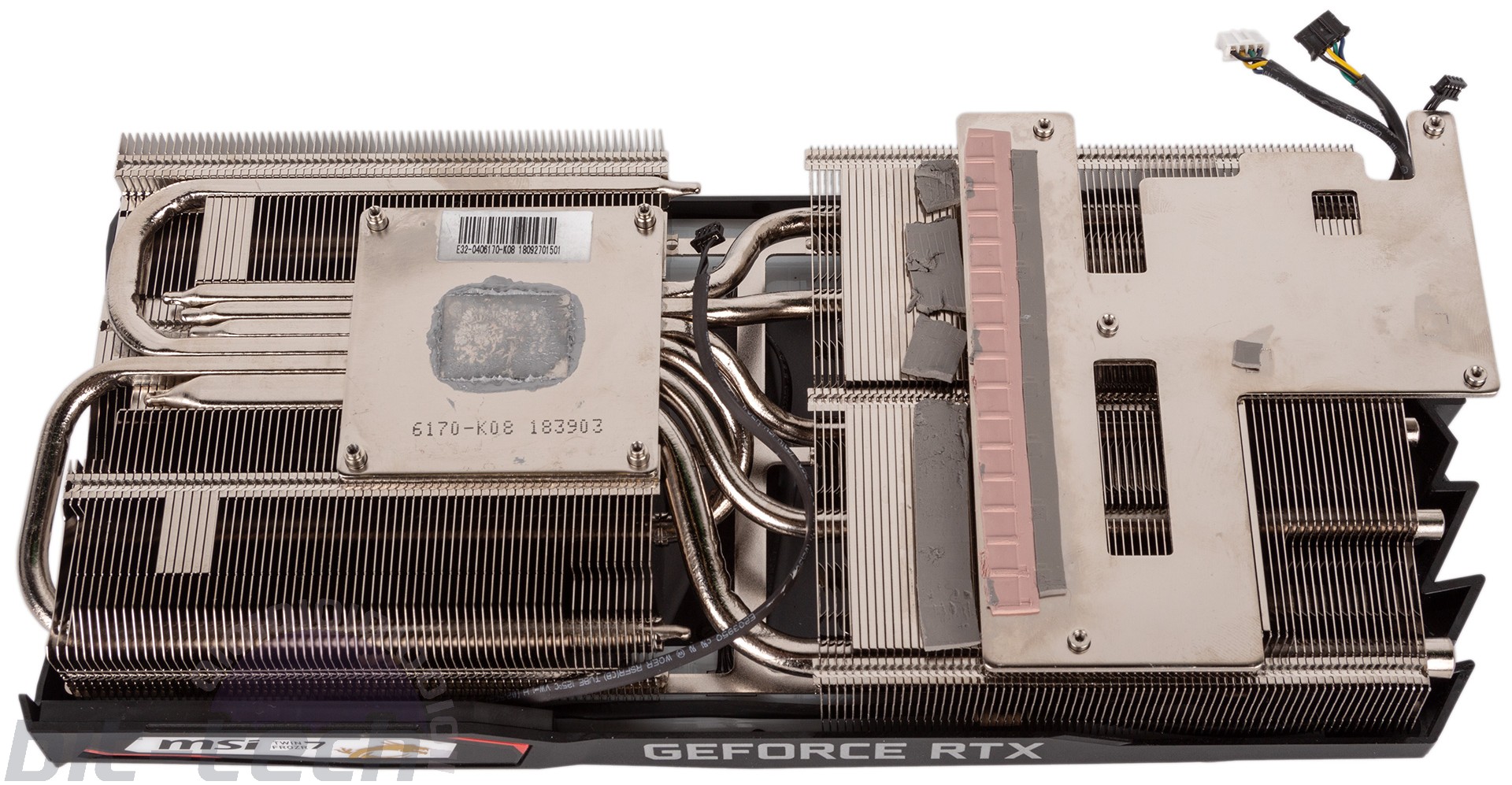 The mammoth Twin Frozr VII heatsink comprises six heat pipes and two aluminium fin stacks. The heat pipes are tightly connected over the critical point, the GPU, and heat is fed to them by a large copper baseplate. Both this and the heat pipes are given a shiny nickel plating, which looks great. The secondary fin stack has its own contact plate that makes direct contact with the primary VRM components using thermal pads. Special features used to boost cooling (according to MSI) include wave-shaped fin edges beneath the fans designed to allow airflow to pass more smoothly and with less noise, and even a supposedly premium thermal interface compound know mysteriously as ‘Thermal Compound X’.

So far the RTX cards we’ve seen have used PCB designs that copy or are very close to the reference/Founders Edition designs, but here we have a fully custom one that’s much taller than usual and has more circuit layers. MSI describes its power circuitry as ‘beefed up’ but doesn’t go into detail; there’s no mention of Military Class components like there usually is, and the power phase count matches reference designs at 8+2. The little dragon logos on the chokes are cool, at least. The PCB also has a die-cast metal plate secured to it that cools the memory modules and secondary VRMs as well as acting as an anti-bend structure.

The card carries a three-year warranty, putting it in line with the Founders Edition and other competitors. 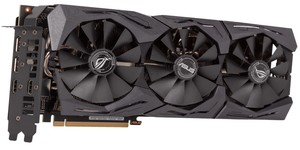 This feature-rich card outdoes the Founders Edition in many areas, but it doesn't come cheap.