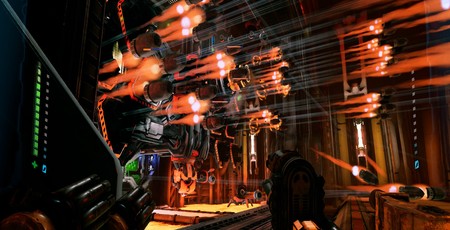 Have you ever seen that episode of the Simpsons in which Nelson draws a picture of a robot with guns for arms? Or more specifically, “a robot with guns for arms, shooting a plane made out of guns that fires guns?” This is also a fitting description of MOTHERGUNSHIP. It’s game in which you shoot guns at even bigger guns in order to craft more guns to fire at yet larger guns. It’s the fever dream of America’s most ardent NRA member. As you’d therefore expect, MOTHERGUNSHIP knows a thing or two about good gun design, and there’s no small amount of joy to be had in constructing and then deploying your own personal death-spitter. But there’s a difference between good gun design and good shooter design, and it's in the latter area where the otherwise admirable MOTHERGUNSHIP shoots itself in the foot.

MOTHERGUNSHIP puts you at the centre of an alien invasion of Earth, although the word “alien” gives the wrong impression as said invaders are AI robots with a very worrying gun fetish. You play as a member of the Resistance, who stumbles upon an extra-terrestrial breadcrumb trail that leads right into the heart of the alien assault force. So you commence on a journey hopping through the aliens’ orbiting Armada, blowing up spaceships and stealing datacores in order to figure out how to infiltrate and destroy the eponymous MOTHERGUNSHIP. Frankly, this is all just window-dressing used to frame big, meaty chunks of furious gun-on-gun action. Rather than having a set roster of weapons at your disposal, MOTHERGUNSHIP instead lets you design your own arsenal. You can wield two guns at once, each of which is formed out of three different component parts – connectors act as the framework for your gun while barrels are where business is conducted. Lastly come modifiers, attachments that affect things like damage, spread, recoil and firing rate.

This forms the basis of a highly open system that lets you create whatever mad firearm-Frankenstein you want. So long as you have the requisite component parts, the only limit on what you can create is whether it will physically fit together. It’s entirely feasible to build a triple-chaingun, or a gun that fires three different kinds of lasers, or a weapon that combines a rocket-launcher, a sawblade spitter, and a barrel that fires spiked balls (with the kind of recoil that would rip your arm from its socket and impale it through the ceiling). While there are few limits on what you can create, certain balancing agents are always at play. To start with, you can’t craft a gun and then take it with you on a mission, and each mission will only allow you to take a handful of components with you (why you’d send a soldier on a dangerous mission with his gun not even constructed is one of several strange questions MOTHERGUNSHIP raises and fails to adequately answer).

You can pick up more components from shops inside the alien spacecraft (don’t ask), but only by using coins dropped by destroyed robots (seriously just go with it). This helps to provide a sense of progression to each level, as you start out with just one or two basic weapons, and gradually expand your ambitions as the level progresses. In addition, each weapon has a set amount of energy, which will deplete faster for every barrel you add. This will affect your firing rate and DPS, although you can increase both by unlocking the requisite armour upgrades. Hence, there’s an element of tactics to MOTHERGUNSHIP’s bulletstravaganza. You need to decide whether you want to deal a constant stream of low damage, or punch hard, recharge, then punch again. The wise decision, of course, is to have one gun for each job. You’ll also need a blend of short- and long-range weapons, as enemies will attack you from various distances.

In play, MOTHERGUNSHIP is a robust and frequently spectacular shooter. Each alien craft you infiltrate comprises a series of large, arena-like “Rooms”, lined with all manner of hazards and obstacles. You’ll often have to fight enemies while bouncing between jump pads, as lines of wall-turrets fill the air with ludicrously oversized bullets. Your actual enemies range from swarming drones that fire lasers and attempt to carpet-bomb you, through cyborg dogs that nip at your heels, right up to gargantuan walking tanks which try to incinerate you with thrumming heat-rays. When it all comes together, MOTHERGUNSHIP is quite remarkable to behold, a furious mash-up of old-school FPS gunplay and modern game-design concepts. But there’s one area where MOTHERGUNSHIP jams up quicker than a Sten gun, and that’s in flow. Your momentum is constantly being interrupted, either through having to stop to modify your weapon, or having to wait for the net area to load. MOTHERGUNSHIP’s levels are constructed from a blend of random generation and hand-crafted design. Certain areas always remain the same, but each room is connected to several other rooms, all of which offer slightly different challenges while ultimately leading you to your destination.

It's a neat idea, offering some freedom while stopping you from getting lost, but the combination of this with the crafting mechanic means you’re constantly stopping and starting, and it’s not like these moments of downtime are brief, either. Each gun modification will take several minutes, and waiting for a new area to load can take up to thirty seconds. During story missions, MOTHERGUNSHIP tries to compensate for this by feeding you plot-dialogue while you wait. But, well, that leads us onto another problem. MOTHERGUNSHIP’s writing veers wildly between amusing and infuriating. I quite enjoyed it at the beginning, specifically when you’re awarded the task of saving Earth entirely because of being in the right place at the right time (“He’ll do” as the leader of the resistance puts it). After a while, though, it becomes apparent that the game is trying a little too hard to be funny, with the consequence that it spends too long yammering in your ear as you try to get on with the game. Its constant stream of occasionally witty dialogue is very similar to Borderlands, although mercifully not quite as obnoxious.

Don’t get me wrong, I like MOTHERGUNSHIP. But I think I’d like it more if it let its guns do the talking, and the format of its level design was a little less predictable. That being said, I can’t deny that obliterating a horde of robots using a home-made gun that fills half of your screen is a mother-gunning good time, easily outpacing the game’s less stellar moments.