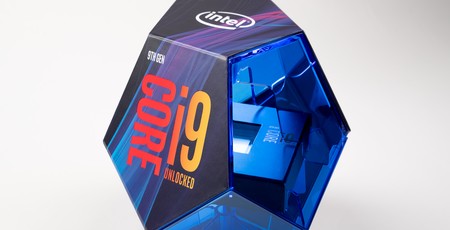 The end is nowhere near in sight yet for the end of the CPU wars and there's plenty more in store for the rest of 2018 too, with both Intel and AMD launching full broadsides of high-end desktop CPUs. Today, though, we're blurring the lines between mainstream and high-end as we put Intel's new mainstream flaghip through its paces - the Core i9-9900K.

In case you've been on another planet recently, you won't have failed to see the numerous leaks and dodgy benchmarks that have revealed nearly all we need to know about this eight-core, 16-thread CPU, but today we're finally allowed to provide those bonified numbers that you're after in everything from games to rendering and content creation.

It's an increasingly crowded market and from several angles too. Intel already has eight-core CPUs in its high-end desktop range and AMD, of course, has its Ryzen 7 CPUs as well as last generation Threadrippers that cost less than the Core i9-9900K. Intel's lower stack also means it has competition from the Core i7-8700K, which even at the more inflated current prices around £450, is £150 cheaper than pre-orders of the first mainstream desktop Core i9.

So where on earth does the Core i9-9900K fit in? Well, at face value, you're looking at Coffee Lake refresh using Intel's aging 14nm manufacturing process, specifically 14nm++, thanks to yet another generation of CPUs based on this lithography due to 10nm's delay. Intel's 14nm parts now encompasses five distinct generations of mainstream desktop CPUs, stretching back to 2014's Broadwell. Apart from 128GB RAM support, some tweaked frequencies and perhaps more significantly, altered cache amounts which we'll talk about in a minute, it's not completely wrong to think of the Core i9-9900K is essentially a Core i7-8700K with two more cores and four more threads. Intel has made quite a fuss about content creation this time around and rightly so - those two cores aren't likely to yield any boosts to gaming performance but should offer a sizeable increase in multi-threaded prowess.

However, the more crowded the CPU market gets, the more niche each product will be and many are struggling to see why you'd fork out £600 for a CPU that will probably offer slim gains compared to cheaper Intel CPUs in games, lack value compared to AMD's eight-core Ryzen CPUs and lacks multi-threaded grunt compared to AMD's 1st gen Threadripper CPUs, namely the 1920X and 1950X, which are £200 cheaper and £100 dearer respectively, but both offer more cores and threads. In other words, the Core i9-9900K appears to have competition both from within its own ranks and from both AMD's mainstream and high-end platforms in terms of price, performance and value.

One answer is frequency. With a peak boost frequency of 5GHz across not one but two cores and a massive all-core boost of 4.7GHz that proved to be a solid feature in our testing (400MHz higher than the Core i7-8700K), these are lofty numbers, even compared to Coffee Lake CPUs. For example, the Core i7-8700K only reached an all-core boost of 4.3GHz and topped out at 4.7GHz, while also having 4MB less L3 cache. In fact, many overclocking with the Core i7-8700K will likely have settled with a 4.7GHz all-core overclock or not much higher so the fact the Core i9-9900K does this across all eight cores at stock speed means that it's a bit of speed daemon out of the box and will certainly have some of the lower end HEDT CPUs quaking in their boots. With on board graphics, specifically Intel UHD Graphics 630 with a maximum frequency of 1.20 GHz, there's scope for building the most powerful discrete GPU-less rig possible too, which might appeal to those after a super-small system just for content creation and rendering, depending specific GPU-acceleration requirements of course, and obviously something you can't do with AMD CPUs except its Ryzen CPUs with Radeon Vega graphics (APUs), which are of course limited to four cores and eight threads at the moment.

The 9th gen CPUs further complicate Intel's mainstream line-up too. As of yet, there does not appear to be a K-series CPU below the Core i5-9600K, which in itself is only a modest upgrade from the Core i5-8600K with the same TDP, cores, threads and cache. However, the Core i7-9700K's lack of hyper-threading indicates a shift in the product stack. This CPU is the real successor to the Core i7-8700K, but it's eight cores and eight threads versus six cores and 12 threads. Our bets are on the former for multi-threaded prowess, but as the two CPUs have the same amount of cache, the Core i7-8700K has 2MB L3 cache per core compared to 1.5MB for the Core i7-9700K. With the increased cache on the Core i9, only it maintains the 2MB L3 cache per core of the old Core i7. It also marks the first time a mainstream desktop Core i7 CPU lacks hyper-threading - even in pre-Sandy Bridge days, after which the 4-digit naming scheme was introduced, the likes of the Lynnfield-based Core i7-860 sported four cores and eight threads.

The reasoning here, especially given the lack of six-core, 12-thread CPU in the new line up, is that Intel is essentially shifting the flagship up to eight cores, so the Core i9-9900K is to the Core i7-8700K what the Core i7-9700K is to the Core i5-8600K, ie one has hyper-threading, the other does not. However, this leaves a sizeable gap in enthusiast K-series products yet again, with nothing below the Core i5-9600K, which costs £390 on pre-order and no sign yet of a quad-core K-series model. That is somewhat concerning, clearly, given we've had an option for overclockers here below £300 since the K-series naming scheme was introduced, although we doubt AMD is unhappy at that prospect. 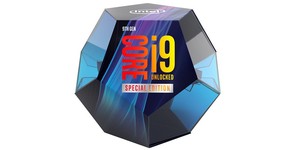 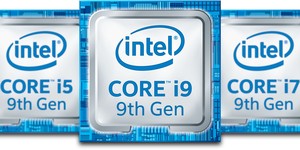