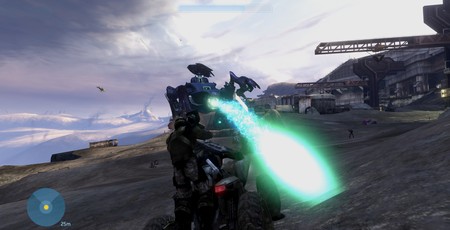 And so, another incredibly late Halo bus finally arrives at the PC interchange. 13 years on since Halo 3 launched on Xbox 360, PC players can finally find out what the heck that Halo 2 ending was all about. The question, of course, is was it worth the wait? Can Halo 3 stand up more than a decade since it first released, without the visual overhaul that both Halos 1 and 2 received? Yes, it can. Halo 3 has undeniably aged and is weaker in some areas than the games that preceded it. But overall, it's the strongest entry in the Master Chief collection so far. Its campaign offers the most enthralling iteration of Halo’s famously dynamic combat, while the multiplayer is probably the best Halo has ever seen.

Like Halo: Reach, Halo 3 is more or less a raw port of the original game onto PC. Aside from unlocked framerates and support for high-definition resolutions, there is no attempt to improve or modernise the game’s visuals or audio. I was concerned about this at first. While the original Halo’s remaster was mediocre, the overhaul of Halo 2 was excellent, and I feared Halo 3 would feel like a noticeable step backwards after playing what is essentially a game from a long time ago. To my relief, Halo 3 holds up well. The play-doughy character models are where the game is weakest, but outside of cutscenes you won’t notice that too much. The opening romp through a jungle features a lot of blurry-textured rocks, while your defence of a giant subterranean bunker is an ugly blur of khaki green.

Yet once Halo 3 opens up, the sweeping vistas and dramatic skyboxes more than make up for the fuzzier details. The cracked roads and heavy stormclouds of Earth under assault convey a palpable sense of foreboding, while the lush forests and grasslands of the Ark fondly call-back to the original game. Halo 3 still demonstrates a fantastic sense of scale. Watching a UNSC frigate attempt an in-atmosphere landing right above your head is truly breathtaking. Impressive as the broader visual strokes remain, they’re not what Halo 3 does best. That would be the combat, which is further refined and expanded over previous games. Like the level design, it takes a little while to get going, with the first couple of missions feeling rather cramped. Nonetheless, the patterns of movement Halo 3 traces out are still satisfying to engage with. The way brutes charge you when their armour is destroyed, the way grunts flee when their leader is killed, the way those fluttering insectoid gits bob and weave in the air, Halo 3 properly engages you in not just blasting enemies, but outmanoeuvring them.

Combat truly comes into its own when vehicles are added. Whereas in earlier Halos vehicles were saved for specific moments, here they’re integral to the game’s structure. Halo 3's larger, more open environments not only means vehicles are fundamental to traversal, but they also allow Bungie to create larger, more spectacular set-pieces. Alongside all the vehicles from early games, Halo 3 introduces the “Brute Chopper” bike, its huge front wheel doubling as a circular saw, and the VTOL, the UNSC’s much-needed counter to the Covenant Banshee. The result is thrilling combined-arms combat, sliding about in the battlefield in a Warthog, before leaping onto the hull of a Covenant Wraith and punching a grenade into its interior. Halo 3’s combat culminates in its Scarab fights, epic battles against towering mechs that can annihilate you with a single blast from their beam-rays. Each of these encounters is treated like a special event, and they superbly highlight both the scale Halo 3 plays at and the dynamism of its action bubbles. Infantry, armour and even air vehicles all come together in this massive sci-fi brawl, and it’s truly wonderful to partake in.

This flowing, dynamic experience carries over to the multiplayer, which offers a now-familiar blend of small-scale firefights and larger, combined-arms battles. Obviously, a lot of games have iterated upon this idea, particularly Battlefield and Call of Duty. I’m not going to say that Halo 3 keeps up with those in terms of spectacle or intensity. It doesn’t. But I do think that Halo’s multiplayer is easier to enjoy compared to your modern big-budget shooters. Less immediately stressful and demanding, it caters toward knockabout fun without pressuring you to excel. Halo is closer in spirit to games like Unreal Tournament and Quake, more focussed on the pleasure of the now, less on what your prowess will earn you at the end of the game. It may no longer be the pinnacle of what multiplayer shooters can do, but Halo 3 can still rock it with the big boys. There are some broader flaws worth mentioning, however. Story-wise, Halo 3 is the weakest of the three original games. This is perhaps inevitable, given Halo 3 is all about wrapping things up. The actual climax is satisfying, but for much of the game you’re basically carried along without an enormously clear idea of what you’re doing or why.

Also, while the audio is better than Reach, guns still lack punch compared to the Halo 2 Remaster. The battle rifle feels surprisingly weedy, and the shotgun is the worst iteration of it through the three games. This is particularly unfortunate when the broader sound design is excellent, from the incredible soundtrack to the clanks and whirs of a Scarab as it lumbers over your head. Nonetheless, it’s odd that, amid all that chaos, the gun firing right next to your head is quieter than everything else. Like a partner returning from their first night out after lockdown, Halo 3’s arrival on PC is more than welcome despite being astonishingly late and looking somewhat ragged around the edges. At a time when shooters seem more interested in numbers and progression than actual combat, Halo 3 is a refreshing reminder of how an FPS can be complex and engaging without having you level up every five minutes.