Forza 4 starts with Jeremy Clarkson talking directly to you, saying how you and he are the same; a dying breed of misunderstood petrol-heads demonised by the boring greens of this world, with all their silly talk of carbon emissions and the environment.

We take issue with this.

But, fear not, for while the Top Gear theme runs through the game its influence is superficial; Richard Hammond and James May are nowhere to be seen. Thankfully, all the rest of Clarkson’s voiceovers are optional too, so not even his ramblings can distract from the fact that Forza 4 is the most sublime racing simulation yet made.

The handling, undoubtedly the most important aspect of any racing game, is the main culprit. Forza 4’s is exceptionally good and the level of driving assistance can be entirely customised, adapting the cars and their finer details to suit any and all players without detracting from the beautiful feeling of driving expensive things very quickly. It would be a shame to stick to the easier difficulties, though, as more control makes racing a far more rewarding experience.

Click to enlarge
The career mode begins with slow cars, allowing players to learn the basics in more manageable vehicles. Starting off driving a Toyota Aygo might not sound glamorous, but it does a good job of making players understand the basics of cornering and teaches respect for the more powerful cars which you start unlocking a little later on.

It's hard to pinpoint exactly what makes Forza 4 feel so fun; partly it's the sense of momentum and weight which makes taking corners enjoyably challenging, partly it's the sensation of grip which makes wrestling cars around tight corners at high speeds is as unforgiving as it should be. When you begin to skid, especially in a rear-wheel drive, the precision needed to keep from over or under-steering makes holding the sweet spot all the more satisfying.

In real life, driving at high speeds is an adrenaline inducing experience and until now racing sims haven’t really captured that - or, at least, not as well as Forza 4 does. In Forza 4, scraping through corners on the brink of losing control gets the heart pumping in a way that’s similar to the arcadey, nitrous-fuelled Burnout, or Need For Speed games.

If you're struggling to get to grips with the handling then an optional racing line is available to help. This shows either the exact line to take, or just when to slow down, depending on what you want. Seeing the ideal racing line, when to brake, and how hard, teaches players how each car should be driven and what speeds to enter corners at. Once a few corners are taken properly something clicks and the feel of it is committed to memory.

Forza 4 Endangered Species Trailer
However, we recommend not keeping the full racing line on for long as it saps spontaneity and creativity out of racing. It’s the gaming equivalent of painting by numbers: useful for learning, but restrictive after that.

It's not all just about the cars though - the races themselves are dynamic and exciting too. Opponents are unpredictable without being erratic, and occasionally make very human errors. They don’t go out of their way to ram you, but aren’t entirely passive and won’t be easily bullied. Sadly, like all racing sims it’s possible to cheat a bit by using opponents as a moving wall to help take corners, but Forza attempts to balance this by deducting credits and XP for any damage caused from post-race rewards, but it's not usually enough to work as a meaningful deterrent.

The amount of credits and XP received from each race depends not only on performance, but also the driving assists you've used, encouraging you to get out of your comfort zone. Adjusting steering and braking assists, racing lines, opponent ability, gear settings and rewinds, all add a percentage to the overall reward. 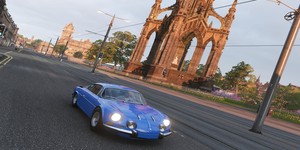 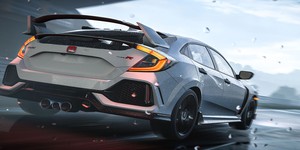