It's not that it's a bad game. Everything functions as it should. Lasers crackle into sparks, TIE fighters have their familiar whine and Stormtroopers swarm across the skyline like ants. It really does look and sound like the movie.

This is Battlefront's crowning achievement, and what most people will cling to as evidence of how great Battlefront is, allowing Darth Vader's shiny helmet or the ability to fly the Millenium Falcon around in a dogfight to cloud their minds. The nostalgia is strong in this one.

Crucially, it doesn't feel like the movie. Rebel forces toss scores of grenades down a corridor at the approaching imperials, while a horde of Stormtroopers will climb the trees of Endor so that they can jump down and ride the top of an AT-AT; the hulking walker offering a safer firing platform than the forest floor. It's a war fought not by elite forces but by players, who are eager to game every part of the system to their advantage.

This is an unavoidable part of video games. The mechanics of a good game and a good movie rarely align. So the slight tonal differences between the films and Star Wars Battlefront are forgivable.

What's inexcusable is Battlefront's is that it's shallow, and this lack of depth permeates the entire game, making any long term play feel boring. You can't even kill the Ewoks.

For several years now, AAA wisdom has held that to keep your multiplayer game compelling you need to include an unlock system. Battlefront takes this to its zenith, locking away every single piece of progression behind an experience wall. Want to throw a grenade? You'll need to play for several games to unlock the ability to buy the card (using currency you acquire from playing in game) to equip it. Want a gun different to the laser rifle you're currently carrying? You'll need to play for a while to unlock the right to buy something else that shoots lasers. Worse, while your new toy will fire out lasers in a slightly different way, it won't be different enough to differentiate them from other weapons in your arsenal.

It's fine for the game to be a shallow experience, but to also force a hefty progression system on you to make sure you don't get to play with any of the fun parts of the game unless you put in far more time than the game deserves.

While the range of different guns may not give you all that much of an edge, the "cards" that take the place of your equipment, perks and special weapons give you a gigantic edge. You start with none, and will regularly be annihilated by a rocket launcher, ionised laser shots or even someone jetpacking over you. It's been a long time since a game outright just made it's multiplayer unlocks flat out better, and you feel like the disposable mooks on the screen for several games until you unlock enough tools to start defending yourself against more experienced players. 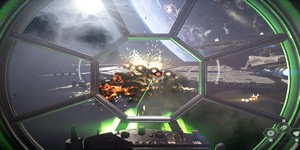 Rick investigates whether Star Citizen is shaping up to be a Space Odyssey or a Galactic turkey.