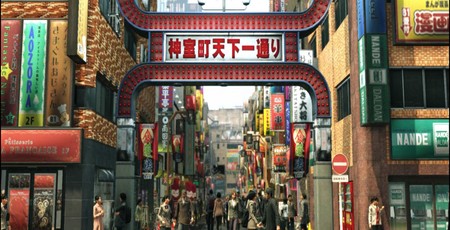 It would be easy, listening to the descriptions, to write Yakuza 6 off as just another open-world crime game.

Indeed, there is an open world and you do get to roam around it, leathering assailants as life-long badass Kazuma Kiryu. But this action game is far more than the sum of its parts, a crime game several steps removed, with each individual detail combined to create a game where the real joy isn't in collecting and customising a garage of cars or gunning your way through several hundred police officers but simply exploring the world, interacting with it in quiet and subtle ways. The Yakuza series has always felt like a holiday. Yakuza 0, released last year in the West, allowed players to experience a vision of 80s Japan that had a veneer of authenticity even if I can't personally comment on its accuracy. Yakuza 6 offers a similarly authentic experience, even if I still have no experience of the locations and culture from which it draws its inspiration. There is a wonderful mix of odd shops, ageing arcades, batting cages, nightclubs, and dubious stalls selling inadvisable street food, and it's all there for you to dip into at your leisure. Yakuza's brilliance is in the world it presents to you, wholly unique in a world filled with AAA depictions of western cities.

Yakuza 6 is a smaller affair compared to Yakuza 5's sprawling mix of cities and protagonists, and it lacks the sheer scale of Yakuza 0's 80s excesses. In Yakuza 6, you visit the series' home of Kamurocho, smaller than before with much of it locked away, and also the port city of Onomichi, new to the franchise. Kazuma Kiyru is your sole protagonist, and as the game is set contemporarily in 2016, he takes photos of his meals before eating them. The more you look, the more of the game has been cut away, but this to me feels like an exercise in clinical precision and efficiency rather than butchery that removes the good parts.  Kazuma has just one fighting style, and the levelling system has been overhauled to be simpler compared to the previous games' unusual systems. If previous games in the series have at times felt overly ambitious, Yakuza 6 has a laser focus, replacing the enormity of previous games with a tidier offering that's been polished to a high shine.

I'll come out early and say that while this isn't the best Yakuza game I've played, it feels like the best put together. Yakuza 6 thinks a lot about legacy. This is the last ride for series protagonist Kiryu, and the fact the game shows off its main location of Kamurocho, bearing the scars and alterations made throughout the franchise's many iterations, is a fitting end. Later, you'll head to the sleepy Onomichi, which feels unmistakeably like Yokosuka, the worn-down port town that serves as the location for Yakuza's spiritual predecessor, Shenmue. Both locations share a certain tiredness, and the change of pace from the constant buzz of Kamurocho is at first jarring but soon fits, and it's a location that hopefully appears more in the franchise's future, a new beginning spawning from the finality seen here.

On the subject of history, Takushi Kitano puts in a subtle performance in the game, something of a joy considering how much Yakuza has borrowed in terms of style and form from Kitano's films over the years. While an earlier trailer for the game's Japanese release showed him tossing a baby, his actual performance is lower energy, weary. Early in the game a hotheaded young member of the Yakuza tells Kiyru that it's time for the young to step in and lead while the fossils go into the night. This is a game of old men taking care of long ago grudges and trying to come to terms with a world that no longer operates by the same rules. Yakuza 6, tonally, feels like a celebration of what has come before but also what could be coming next, and there's an optimism to the game that's genuinely engaging.

Protagonist Kiryu is a shining beacon of optimism, too, the antithesis of misanthropic protagonists like GTA V's Trevor Philips or Saints Row's 'Boss'. He's kind when he has no reason to be, honourable, thoughtful, and driven. Kiyru is the kind of guy to buy a young girl merchandise for her favourite celebrity or deliver a hot meal to a homeless man. These errands make up the majority of Yakuza 6's optional side quests, and while they may not always be entirely altruistic, Kiryu seems like the kind of guy you would want to go for a drink with - even if you wouldn't dare spill it.

Combat in the game is brutal and entertaining, with the player using devastating physical attacks and a collection of weapons to take out foes. You can upgrade your abilities and even unlock a series of finishers - some of these will remind you of the game's roots, with finishing moves that involve pushing an enemy into a women's chest, but mostly it's just a chance to batter someone to death with a traffic cone or throw them dick-first into a lamp post. I confess, I'm nearly 29, and I giggled like an idiot the first time I made a man hit his crotch on a lamp post.

Even with Red Dead Redemption on the way, I'd wager that Yakuza 6 will be the open-world crime game that I'm fondest of this year. It's a little limited in scope, but no other game offers a world that feels quite as alive as this or I city that I've wanted to exist in quite so much. The arcades full of Sega classics, odd interactions, and overwhelmingly bizarre tone to the game create something that you just can't get anywhere else. You could buy Yakuza 6 for the digital tourism and feel happy. However, there's so much more than that, with some engaging fighting and a plot that is actually worth paying attention to. It's smaller in scale, but as Yakuza 6 proves, sometimes it's in the details. 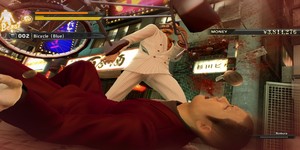