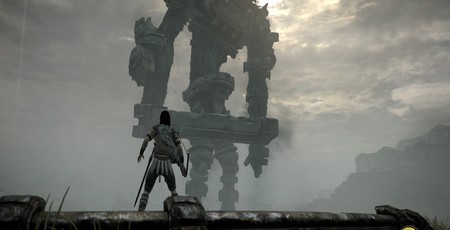 Although I've always wanted to, I've never played the original Shadow of the Colossus. It's just one of those games that has seemed perpetually evasive in my life. This puts me in an interesting position for reviewing this new PS4 version. Bluepoint Games' remake is a complete overhaul of Team Ico's game, featuring brand new art and taking advantage of the PS4's power, while aiming to preserve the style, tone, and mechanics of the original.

I can't tell you what this remake is like compared to Fumito Ueda's original vision, nor do I hold any special fondness for or allegiance to that game. I can only tell you what this version is like to play today. And the short answer is: It's wonderful. I mean that quite literally. Shadow of the Colossus is a game filled with wonders – 16 of them if we're being specific. It's wonderful at a tonal level too, but it's a wonder tinged with melancholy and tragedy. SOTC's vast and beautiful fantasy landscape is also eerily, mournfully silent, while its most stunning sights of all – the massive stone colossi – are the things you've been sent to destroy. Shadow of the Colossus is a game of simple actions, but the consequences of those actions are as troubling as they are cryptic.

The story, such as it is, is communicated to the player mainly through an introductory cutscene. A young and fragile-looking man named Wander brings the body of a girl to an enormous, almost fortress-like temple planted in the centre of a sprawling, grassy plain. Wander lays the body on an altar, and a voice speaks to him, telling him it will exchange the soul of the girl for the deaths of 16 colossi that lumber and slumber in various places through the land. The rest of the tale is told mainly through mood and action. On its original release, both of these were unique to Shadow of the Colossus and caused concern regarding whether this new version would retain them. Shadow of the Colossus is regarded as one of the most original and distinctive games ever made; to remake it in some ways seems like painting over a Picasso.

I can't speak for what may or may not have been lost in this remake. What I can say is, if Shadow of The Colossus was an epic and elegiac journey where long and cinematic horseback rides were interspersed with moments of titanic action, then the PS4 version absolutely delivers on this. Shadow of the Colossus' fantasy realm is simultaneously stunning and foreboding. It's a place where vast, open ranges of land are surrounded by sheer cliffs and flat-topped mesas, where narrow stone bridges are threaded across dizzying drops. It's a beautiful world but one that is also visibly cracked and broken, and although never stated there's a nagging sense that something terrible happened here long ago, and the world has still not recovered from it.

Although I'm a newcomer to this game, I've heard a lot about it in the meantime. Nonetheless, there remained a few personal surprises, such as how quickly you are introduced to the first Colossus, and how strangely that initial fight plays out. When you encounter this towering creature, its back is turned to you, and it's you who is the aggressor. The size of the beast is impressive and intimidating even by today's technological standards, and when your first arrow pings off its back like gravel off the side of a tank, you wonder how on Earth you're supposed to fell this ancient monster. Yet while the Colossus can crush you flat, it's also incredibly slow to move, and Wander is able to evade its attacks with ease, clambering onto its back like a flea on a dog. At this point it can do little other than try to shake you off and moan in agony as Wander's blade bites deep, causing shocking gouts of black ooze to spray from its hide. When the creature finally falls, smoky tendrils emerge from its body and entwine themselves around Wander, teleporting him back to the Shrine of Worship.

Your victory leaves you feeling more conflicted than triumphant. The Colossi are thrilling to fight and horrible to kill, while the lack of any explication as to why they need to be killed results in more than a little moral ambiguity surrounding your actions. There's also little in the way of celebration after each battle. No experience is gained, no upgrade points unlocked. Your sole reward is a brief instruction on how to find your next target, and it's off out into the world again, raising your sword into the air and letting the reflection of the sunlight guide you in the right direction. After years of chasing around cluttered open-world maps, the minimalist and matter-of-fact nature of SOTC's play is hugely refreshing. There are a few reasons to occasionally stop and smell the flowers, such as small, obelisk-like shrines which save your progress and provide a small stamina boost, and a couple of other useful collectible items. For the most part, though, it's all about those thundering encounters with the Colossi.

Each of the Colossi encounters is as much a puzzle as it is a fight. The Colossi will brush off all attacks save those made in their most sensitive places, and the key to each battle is figuring out where those spots are and how to get to them. The fights are also very different. The third encounter, for example, takes place on a giant stone platform above a lake, and sees you squaring off against a giant stone knight trying to swat you with a pillar wielded like a sword. The fifth battle, meanwhile, is against a gigantic bird, whom you must coax off its perch in the centre of a drowned city and then cling onto its wings as it swoops down to attack. Clambering on the bodies of the Colossi is a breathtaking if sometimes frustrating experience. The PS4 version retains the game's semi-procedural animation, which makes movement look highly realistic, but also means control responses can be sluggish. More generally, the control scheme has apparently been changed to make it less esoteric, but I still found certain actions to be counter-intuitive, such as pressing triangle to mount Agro but X to dismount.

This isn't too much of an issue when you're simply exploring, but the combination of the slightly unwieldy controls, the detailed yet ponderous animations, and the Colossi trying to shake you off their backs, means that you spend a lot of time in fights simply clinging on, unable to move or do much of anything. Agro can also be somewhat fiddly to control, again particularity in those encounters where his help is required. The fight against the seventh Colossus, for example, involves leading a glacially slow turtle to specific locations while on horseback, and it was such a gigantic faff it almost had me flinging my controller at the screen. This, really, is the only complaint I have about this stunning remake of a landmark game, and in some ways it's a blessing, as it means there's a slightly longer pause before you deliver that final, fatal strike to yet another magnificent creature and send it collapsing into dust. It's strange to think that, when it was first released, some players complained that Shadow of Colossus lacked an identifiable purpose. Now, at a time where open-world games are competing to offer the biggest map with the most distractions, Shadow of the Colossus stands out anew as a game with a singular and unparalleled vision, and an experience that is as remarkable as it is haunting. Shadow of the Colossus movie planned

According to reports, Sony is now planning to make a movie adaptation of PS2 game Shadow of the Colossus.

Shadow of the Colossus map mod for HL2

Looking for a good custom Counter-Strike map to play at your next LAN? Look no further - this is the most spectacular BSP we've seen in ages.