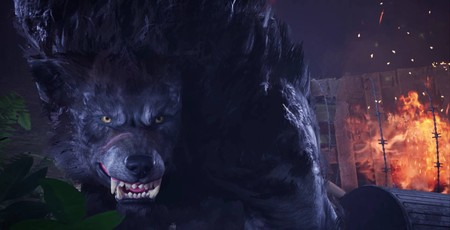 Version Reviewed: PC
Werewolf: The Apocalypse: Earthblood is not a good videogame. It’s dated, laboriously written, often repetitive, and what is arguably its main selling point – the bloody werewolf combat – is nowhere near as refined or interesting as it needs to be. Yet for all of Earthblood’s (many) flaws, I nonetheless find the game oddly endearing, a curious throwback to a different era which, despite everything, manages to generate some schlocky fun out of its concept. 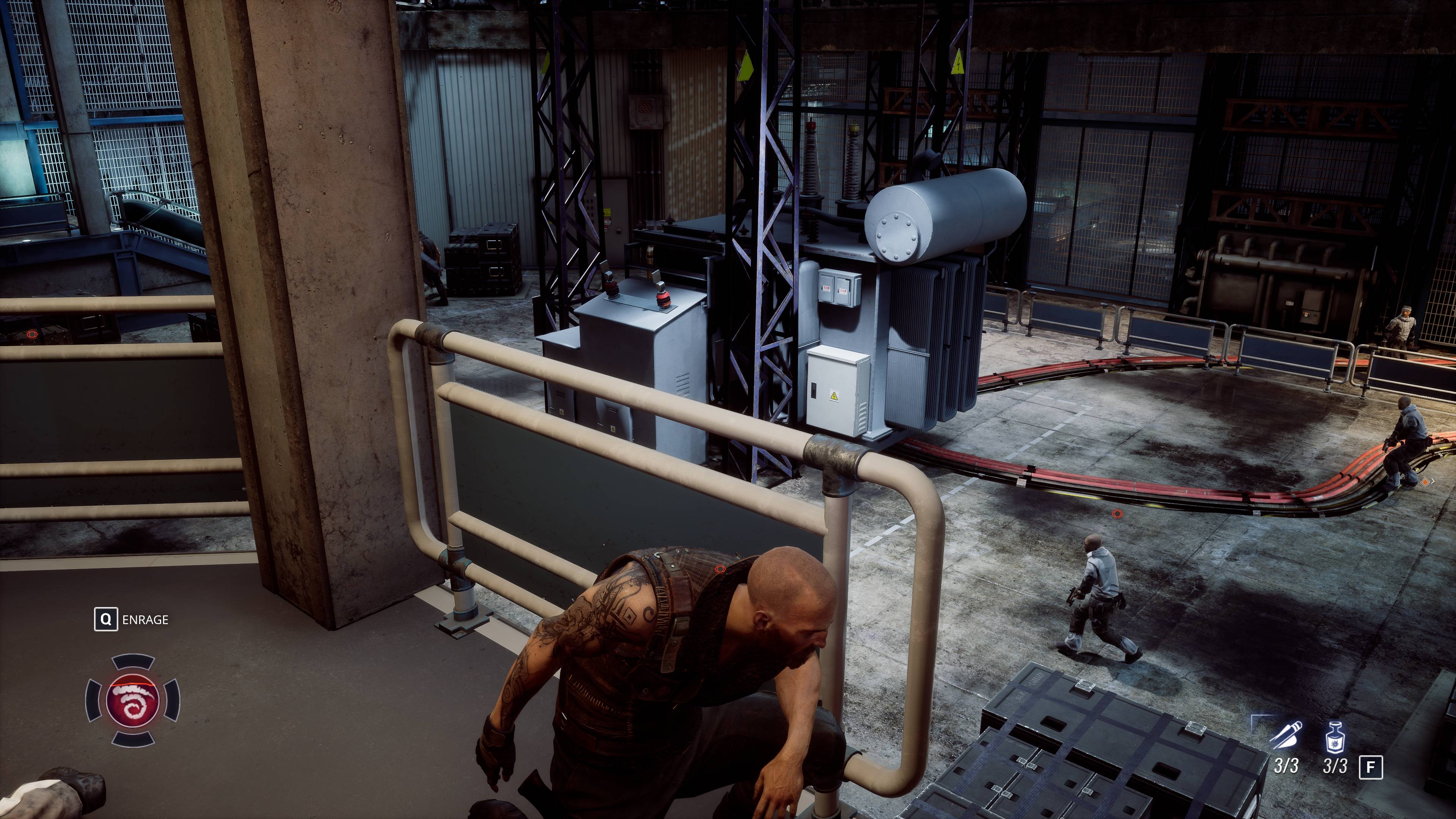 Based on the White Wolf RPG of the same name, Werewolf: The Apocalypse puts you in the role of Cahal, a werewolf who belongs to a clan (or “Cairn”) of fellow lycanthropes living deep in the forests of the rural US. In White Wolf’s fiction, Werewolves are guardians of Gaia, the God of Nature, while humans have been corrupted by a force known as the Wyrm, which draws power from environmental destruction. Werewolves fight the corruption by mercilessly attacking and destroying the most damaging of humanity’s industries and infrastructure. In the case of Earthblood, the story revolves around Cahal’s campaign against Endron, a petrochemical company that also dabbles in private military contracting and genetic manipulation.
The setting has potential to tell an intriguing story about environmentalism. Instead, it settles for a typical action-game yarn. Which is not to say that the story is terrible, merely extremely rote. Cahal couldn’t be more of a stock action-game hero if you dissolved him in water to add flavour to your soup -  a bald, muscular white man who does more brooding than a brace of hens. Side-characters are similarly one-dimensional. The supporting cast includes soon-to-be-dead wife, plucky yet still vulnerable daughter, aged mentor, and scheming, megalomaniacal villain. 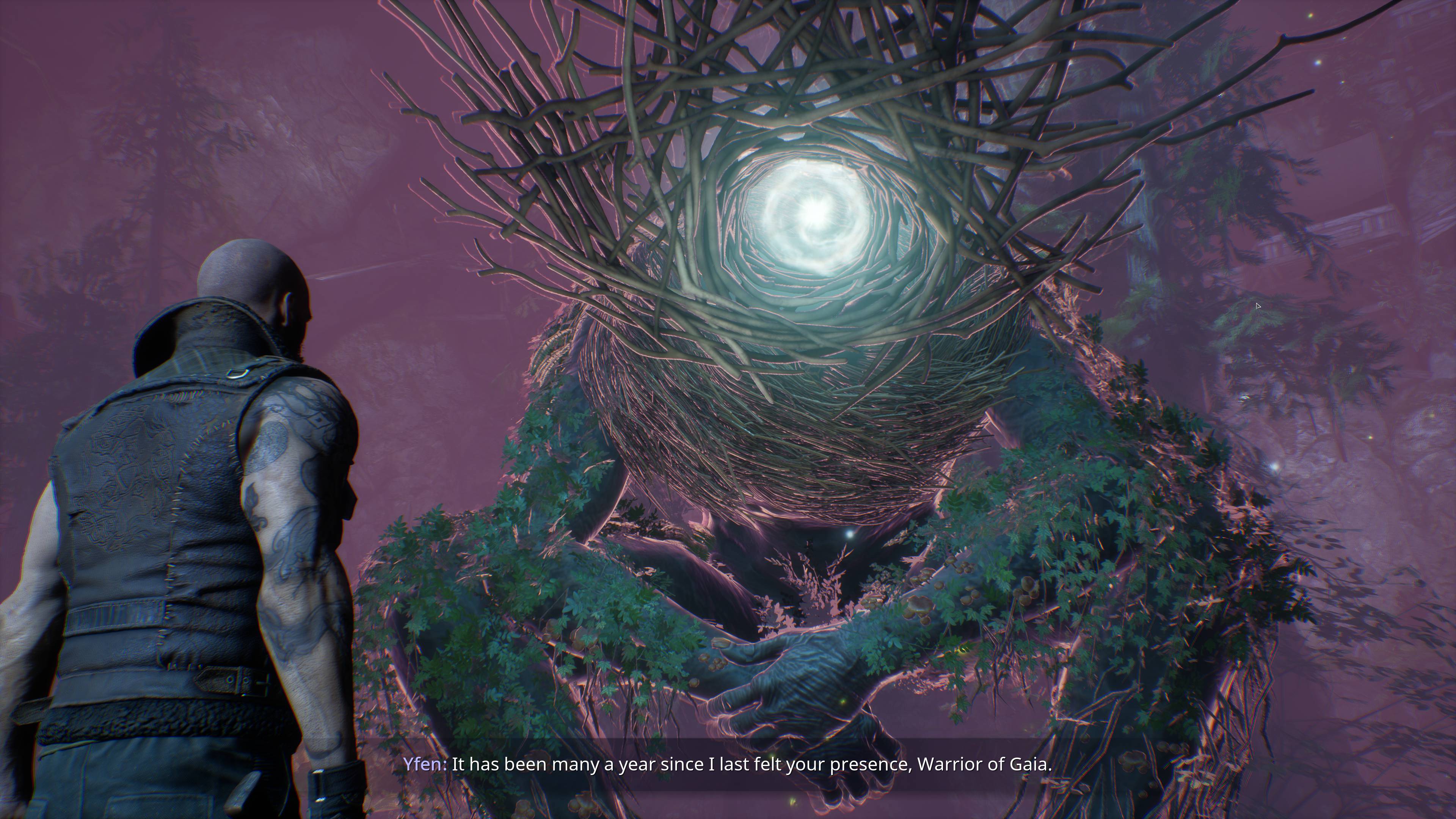 All of this would be less of a problem if the story didn’t want you to care about it quite so much. Each mission is bookended by a return to a hub area, where you need to wade through multiple instances of tedious dialogue to progress. Either give me characters to care about, Werewolf, or just tell me what needs doing over the radio.
What doesn’t help Earthblood is that the game looks both dated and drab. The latter is the bigger problem. Although Earthblood may resemble a game released in the PS3/Xbox 360 era, there were plenty of great-looking games launched around that time. The real issue is the lack of variation between environments and the overwhelming grey colour palette. With the exception of the Cairn, almost every environment is a dun parade of warehouses, loading bays, offices and laboratories. The general level design is also barren and pre-fabby. It’s a far cry from Cyanide’s other games like Styx: Master of Shadows, which while not a great game, at least had a splash of colour.
Styx informs Earthblood in another way, lending some of its systems to Cyanide’s action game. Perhaps Earthblood’s biggest success is how it blends stealth with combat. Most of Werewolf’s missions involve infiltrating an Endron complex in order to sabotage it. To do this, Cahal can change into different “forms” to suit the situation.
The first form is his regular, boring human form, which is used mainly for stealth, performing melee takedowns, and interacting with the environment. You’ll frequently use this in tandem with his second form, that of a regular, if large, black wolf. Wolf-form lets Cahal move significantly faster, and access ventilation shafts to bypass guards and access secure areas. 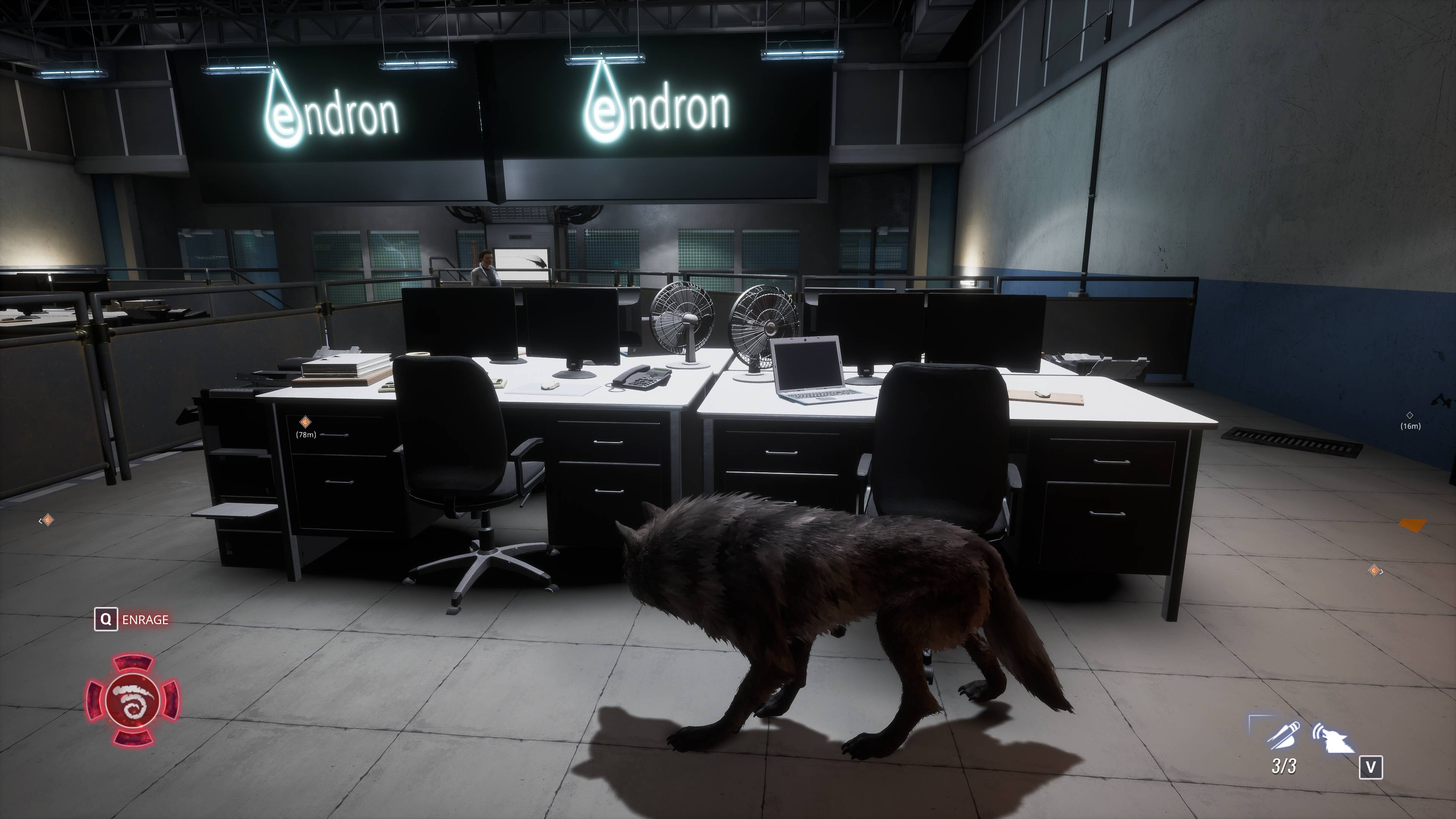 Using these two forms to creep about is relatively enjoyable, partly because it flows well. The stealth AI is generous. Hiding behind any set of railings will obscure you from view, while enemies will take a while to spot you unless you’re in close proximity. This means you can use the wolf form to swoop between cover, then switch to human form to take-down guards you can’t otherwise avoid.
Once detected, you can switch to your final form, at which point Cahal morphs into an eight-foot-tall, musclebound beast and proceeds to go absolutely apeshit. Feature-wise, Werewolf’s combat appears complex. There are two Werewolf stances – Agile and Strength – each of which has its own variants of light and heavy attacks. On top of this, you have special abilities ranging from healing to a roar that knocks enemies over, as well as a Frenzy meter that, when filled by killing enemies, allows Cahal to go even more wild than before. 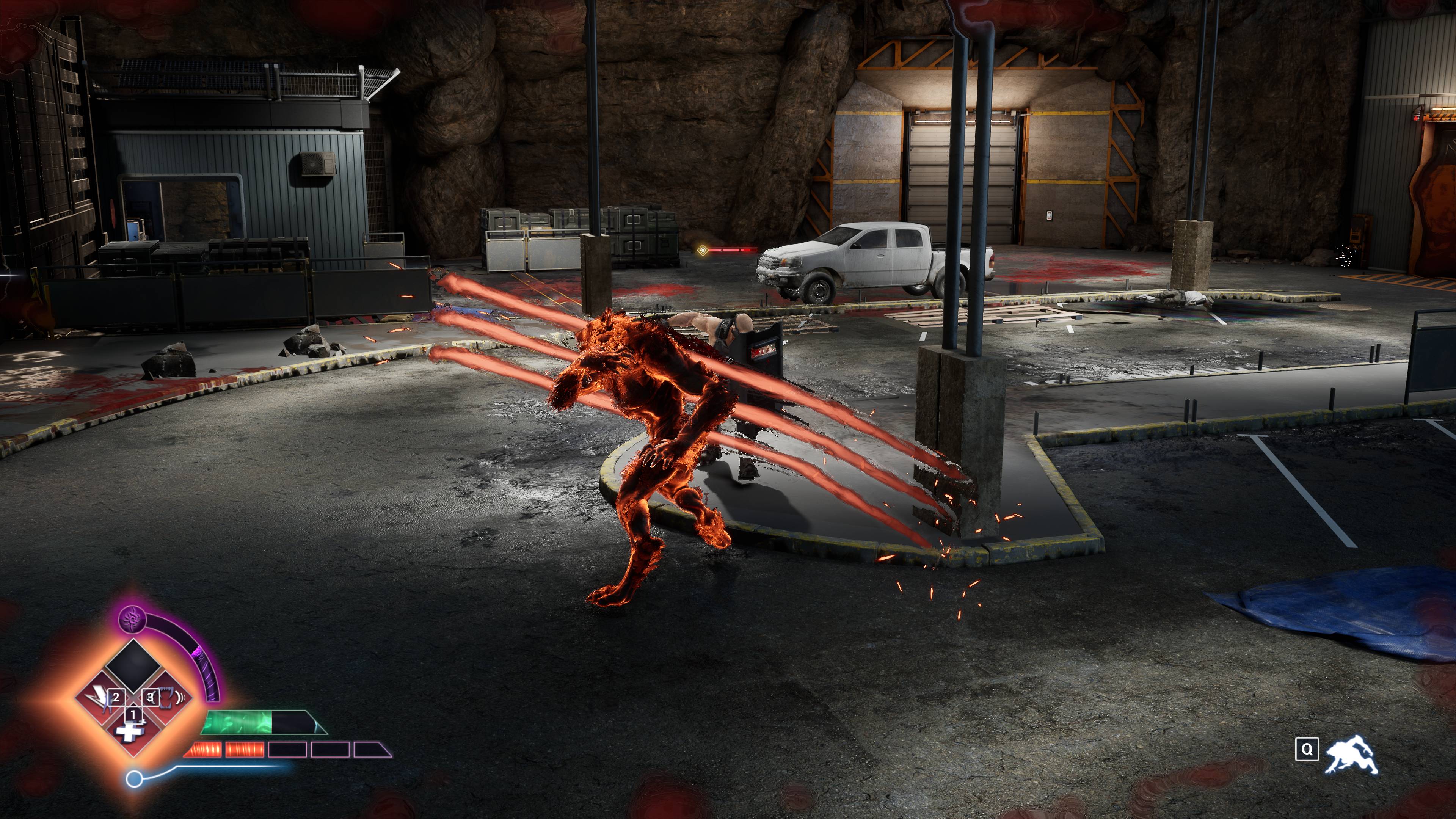 In practice, the combat generally devolves into a button-mashing mess. There are only a handful of enemies you need to be wary of, such as the industrial exoskeletons that attack with buzzsaws and flamethrowers. Even then, staying alive isn’t difficult, thanks to the responsive dodge-manoeuvre and the generous healing ability.
This isn’t to say the combat is no fun. It’s enjoyably chaotic, relatively satisfying and unbelievably bloody. I particularly like the ability to grab opponents, at which point they go full ragdoll and flop around in Cahal’s massive talons. That said, it’s nowhere near deep or refined enough to maintain your interest for long. Attacks lack a sense of connection, which makes Cahal often feel like he’s just flailing around like an underweighted blender on a countertop. Also, at the risk of making myself sound like a serial killer, it’s bizarre that enemies always remain in one piece despite being shredded by claws the size of kitchen knives. Finally, while the game offers a steady drip-feed of new enemies, Cahal’s own abilities don’t evolve much beyond the base set. Combined with the lack of variety elsewhere, this makes the experience feel rather flat. 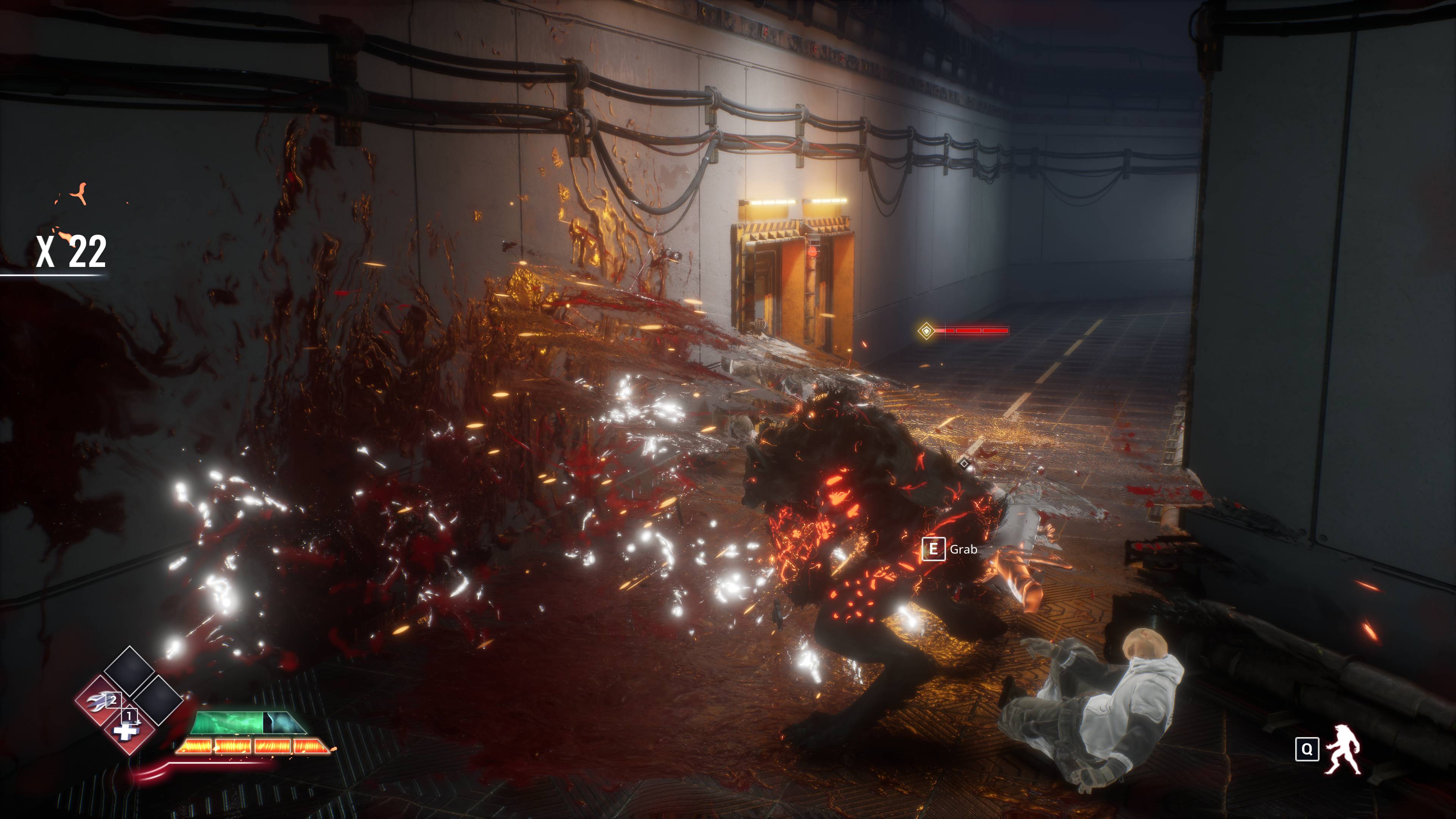 Earthblood would be a perfectly fine action-adventure in the year 2007. But in the year 2021, much of what it does feels dated and uninspired. Strangely though, this is partly why I find it so endearing. These B-list, actively middling action adventures simply don’t get made anymore. Despite being plainly a bit rubbish, there’s a pleasing nostalgia to Earthblood. It’s from a time when games were simpler and more pointed, having the good grace to do one thing and then get out of your life. So while I cannot in good conscience recommend Earthblood, I do like the fact that it exists. 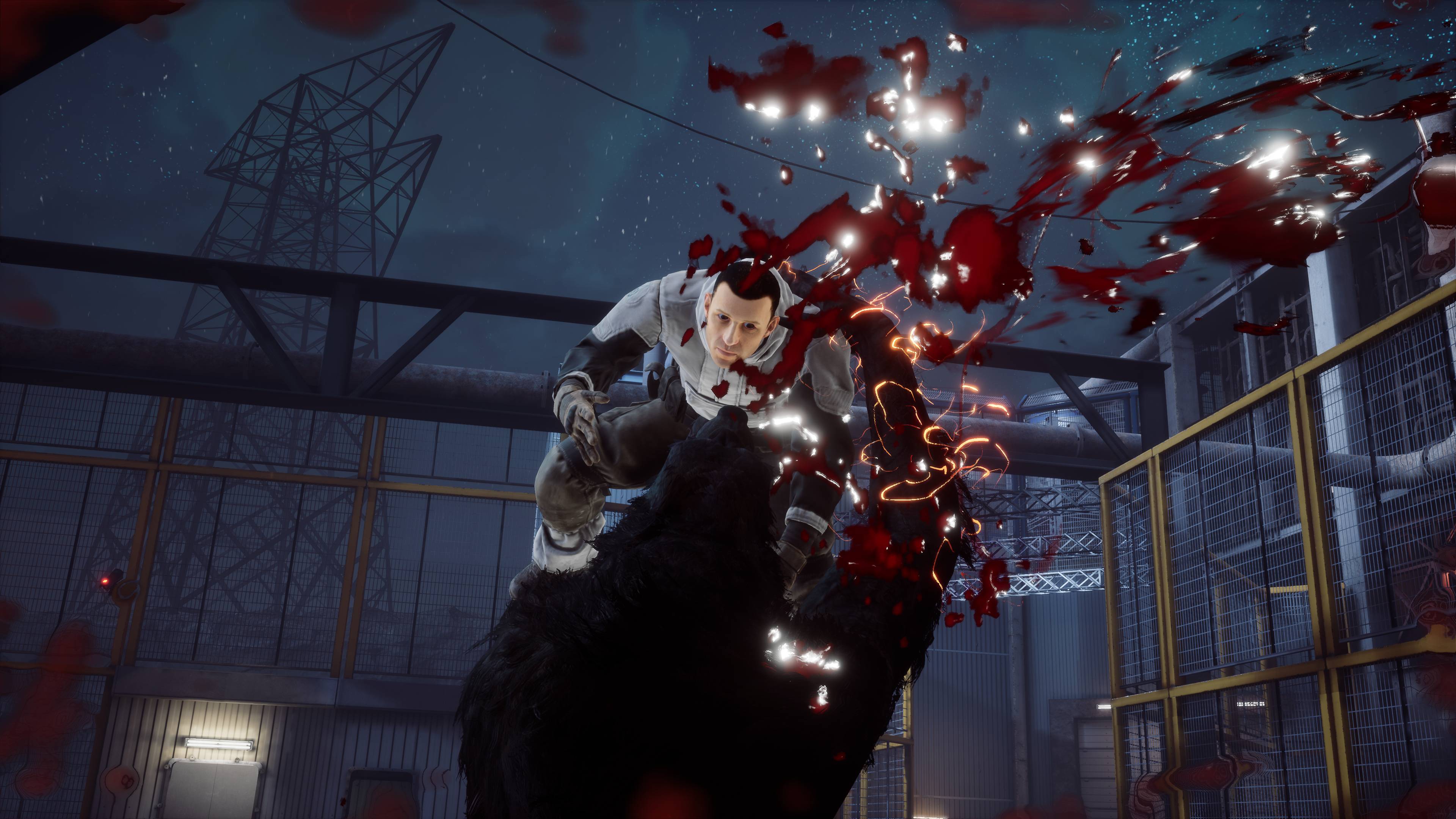