VVVVVV is from another era, that much should be obvious from the screenshots. What isn’t as obvious though is the fact that it’s nowhere near as antiquated as it looks and that the game is actually one of the most intelligent and polished titles to come out of the indie development scene since Braid.

Like Braid, which is something an indie platform puzzler like this can’t help but be compared to, VVVVVV (which stands for Veni, Vidi, Vici, twice) wears its influences on its sleeve. Braid poked at the formulas introduced by Mario Bros. and Prince of Persia. VVVVVV does the same to Jet Set Willy and Portal.

It’s the Jet Set Willy vibe that echoes most strongly, with VVVVVV’s graphics clearly harking back to the age of the BBC Micro and the work Spectrum ZX – systems which the older generation of serious gamers can probably just dimly recall, and the younger among you have no idea about. As someone who compensated for a lack of Zelda and Sonic with games like Manic Miner and Chuckie Egg, I’d just like to say to anyone who missed that golden era of the home PC and thinks gaming began with the NES, or heaven forbid, the PS2; you don’t know what you’re missing.

VVVVVV - the opposite of ZZZZZZ
Getting back on topic though, VVVVVV starts by abruptly casting the player as the captain of an 8-bit spaceship that’s hurtling through space on some mission which is neither clear nor important. Suddenly the screen shakes; you hit some interference, try to evacuate and it all flashes white. Somehow the same amount of drama that Valve manage to squeeze into the various climaxes of the Half-Life series is concentrated down to a few shuddering frames and fuzzy sound effects.

When the captain exits the teleporter he’s all on his own in a strange place, in a strange dimension, strangely enough. His little smiley face flips into sad mode when he realises his crew is lost and VVVVVV wrests an ‘awwww’ of sympathy from you before you realise exactly what’s happened. In fact, we’re still not entirely sure what the plot of the game is – just that the captain spends the bulk of the (quite short) game searching his surroundings for teleporters, trinkets and crew members.

That doesn’t matter though because VVVVVV isn’t about the story, not really. It’s about more about exploration and (playful) frustration – pushing back the fog of war on the maze-like overworld map - and getting annoyed at yourself when you can’t handle one of VVVVVV’s unique space-flipping puzzles.

And you will get annoyed. Lots. 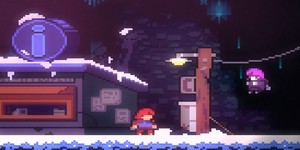