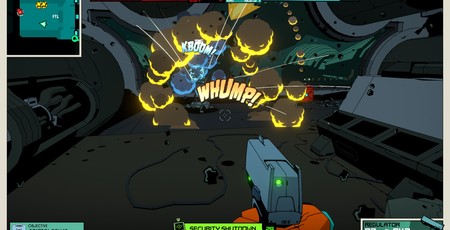 I’m on a derelict warship scavenging nukes when the alarm goes off, blaring throughout the vessel. I was too focussed on skirting around a puddle of radioactive waste to notice the security camera squinting at me from the corner of the room. Now there’s a Security Bot after me – imagine a Dalek but worse – and I don’t have enough ammo left in my gun to deal with it. What I do have, however, is a Rifter, a device which lets me teleport any enemy into a pocket universe, then deposit them in a different area. So I stand with my back to a wall and wait for the Security Bot to trundle around the corner. When it does, I suck it up with the Rifter before it can get a shot off. I then point the Rifter toward the nearby torpedo room, release the Security Bot and immediately lock the door.

I feel satisfied with my quick thinking for all of five seconds, because the Security Bot instantly unlocks and opens the door. I escape the ship with a sliver of health, no ammo for my gun, and no torpedoes to show for all my wasted effort (and blood). I suppose I should be grateful for my life, but chances are that’s only going to last until the next derelict I dock at, which has an even higher security rating than the ship I just left. Welcome to Void Bastards, a game that asks the all-important question, 'What if System Shock 2 met FTL and they started making Douglas Adams references until everyone else in the pub lost their patience and murdered them?' It is, weirdly, a very close approximation to my dream game, one that I would have liked to make myself if I had the time, money, and above all talent, to do so. As you can probably now surmise, I like it quite a lot, although it does sport a couple of annoying problems that mean I don’t like it as much as I wish I could.

You assume the role of one of many convicts being transported in a space prison vessel when something goes horribly wrong, and the vessel ends up trapped in a gigantic spaceship graveyard. Having been rehydrated out of a bag, you’re told by the ship’s friendly and not-at-all psychotic HR robot that you need to pop over to a few of the derelict craft to collect certain items before you can be on your way. There is a slight chance that those ships contain hostile mutants and/or hazards that will dissolve you at a molecular level, but hey, you’re expendable criminal scum, so there’s not much point worrying about it. The end-goal of Void Bastards is to create a System Shock-like experience, but one where you create and resolve your own objectives. You navigate the space-graveyard via an FTL-like interface, with multiple paths open to you at any one time. There are many different types of ship in the graveyard each of which contains resources you can use to craft new weapons, equipment, and key story items. But travelling between ships costs you fuel and food, and the deeper into the void you go, the more challenging those ships become, so you need to think tactically about which items you most pressingly need to progress, and which ships to scavenge in order to get them.

When you board a ship, the game switches to a first-person view. You only have a few minutes of oxygen in your spacesuit, so you need to prioritise how you’re going to explore the ship. Each ship comprises somewhere between five and 20 rooms. These serve different functions and can be used to aid your exploration and scavenging. In the ship’s bridge, for example, you can download ship data to highlight all retrievable objects on the ship's map, while the terminal in the security room can temporarily shut down cameras and gun-turrets. Loot is also assigned logically to the relevant areas of the ship. If you’re just after fuel, then you can head straight over to the ship’s FTL drives, while you’ll usually find a few scraps of food (always, for some reason, sandwiches) in the habitation area. Of course, standing between you and those objectives are all kinds of potential ways to die. Hostiles range from foul-mouthed telekinetic children to 'tourists' who have mutated into glowing blobs that explode when in close proximity. Each ship usually has some randomiser attached that makes it either a little safer or a little more dangerous. Some ships are shrouded entirely in darkness, for example, while others might feature higher or lower security than normal.

As you’ve probably noticed by this point, Void Bastards has an extremely distinctive comic-book art-style, as well as a very daft and quirky sense of humour. Those foul-mouthed Juves, for example, wander around the ships shouting randomly offensive things like, 'Surprise, buttface!' and 'I could kill for some pick ‘n’ mix' (which is the far more disgusting of the two).

Prior to playing Void Bastards, my main concerns about the game revolved around these elements. I worried they might detract from the immersion of the game’s universe, killing the tension of what could be an incredibly atmospheric game. As it turns out, the balance works really well. The comic-book art looks fantastic in motion, and the game’s humour chimes with my own more or less perfectly. Most importantly, they add flavour to Void Bastards without detracting from the tension of creeping around the ships. The jokes might be daft, but the creatures themselves are still dangerous, and there’s nothing funny about your O2 counter rapidly ticking down to a big, asphyxiating zero. This isn’t to say the game is problem free, however. Void Bastards features many colourful and creative weapons, but the actual gunplay is not the best. Much of your arsenal lacks the impact required to make the combat satisfying, and some enemies are just bloody annoying to fight. Some like the Spook, who can vanish and reappear behind you, are good ideas that needed sharper execution. Others are just bad ideas. There’s one enemy called the Patient which is both a floating enemy and a swarm enemy that is no fun to engage with whatsoever.

In addition, there’s a significant spike in difficulty between the first and second tiers of ships. Sometimes the random generation goes way overboard with the numbers of hazards and enemies knocking around. Void Bastards is at its best when your exploration involves a balance of skulking around and combat, but it can veer to the extremes of either of those points, whereupon it becomes either to boring or too darned difficult. You’re notionally supposed to be able to avoid enemies, but actually doing this is very tricky, as Void Bastards’ stealth mechanics are barebones at best. Despite these frustrations, I find Void Bastards keeps pulling me back in. As well as being wonderfully stylish. It’s a very smart distillation of those old immersive sim ideas, and uses randomisation and a looser, more player-oriented structure to excellent effect. It’s not quite the tour-de-force I was hoping it might be, but it’s well worth your attention regardless. 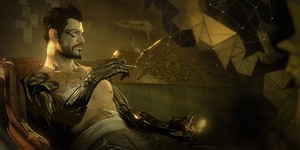 The 10 Best Immersive Sims Ever

Gods from the machine.

Joe wants to tell you about FTL. Don't worry, he'll make it quick.