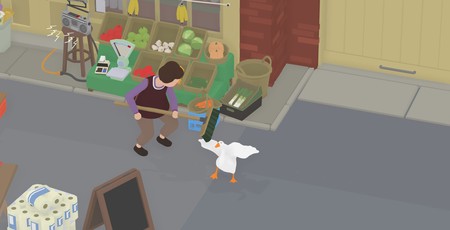 'It’s a lovely morning in the village and you are a horrible goose.'

Normally I wouldn’t quote a developer’s own store summary of its game, but House House summarises its own creation with such succinct wit that there’s no way I could improve upon it. It captures the game’s blend of gentle, gleeful naughtiness perfectly, such that I might slap an award on the end of this paragraph and leave the review right here. Untitled Goose Game is a light-hearted slapstick simulation. You play as a representative of the second-worst bird species after seagulls, waddling around a slice of little England with the general goal of causing as much havoc as possible, chasing people into phone boxes, nicking stuff for no particular reason, and generally being a little vandal. An avian ASBO, a beaky blinder, a feathered fu-... never mind. UGG shares DNA with games like Garry’s Mod and Goat Simulator, although it’s far more focussed than the former and far more fun than the latter. Yet the primary touchstone, odd as it may seem, is Hitman. The game is divided into five distinct areas, each of which has a person or persons going about their daily business. A groundskeeper tends to his vegetables in a quiet garden. A shopkeeper sets out her stall in the street nearby. An old man plays darts at a local pub.

Each of these characters has a set routine, and your goal is to disrupt that routine as much as possible. In the vegetable garden, you need to steal the groundskeeper’s rake and throw it in the nearby pond, steal his hat so he’s forced to wear a different one, and 'Have a picnic' by dragging a bunch of items to a nearby picnic blanket. Complete enough of these objectives, and the person you’ve been harassing for the past half-hour will finally lose their patience, unlocking a final objective that lets you progress to the next area. There’s no real point to any of this, and that’s partly what makes Untitled Goose Game such a delight. Your objective is simply to be the most annoying little git possible, and there’s a wonderful thrill to barrelling through the village’s air of stiffly British politeness like an obnoxious feathery bomb. I mentioned Hitman as the main inspiration, but the thrust of the game isn’t quite the same. Hitman is more about finding a gap in the routines to achieve your objective, slipping through the cogs in the machine and leaving them as untouched as possible. Untitled Goose Game is instead about throwing yourself directly into the gears like a solo bird-strike. It’s as if you’re playing Hitman badly - but on purpose.

Untitled Goose Game takes that idea of breaking social and systemic taboos, then makes it the point of the game. And frankly, House House couldn’t have picked a better medium to channel this through than a big honking bird. It’s worth noting the success of Untitled Goose Game hinges largely on how well House House communicates the, ah…'goosiness'... of the goose. The production design is pitch-perfect, from the arrogant waddle of your goose to its short, piercing honk that makes anyone nearby stop in their tracks. In fact, let’s talk about the honk. Untitled Goose Game lists as part of its features a 'dedicated honk button'. It sounds like a joke, and I suppose it is. But it’s also possibly the best thing about the game. Each honk is like a declaration, a yell of 'I AM HERE TO RUIN YOUR DAY' through a megaphone attached to your face. It makes me laugh almost every time I use it. House House clearly knows it’s funny too, as there are frequent objects you can pick up that modulate the honk, such as a milk bottle that turns it into a pathetic squeak, or a bin lid that amplifies it through the curved metal.

In terms of its concept and the style of its delivery, Untitled Goose Game is pretty much perfect. However, structurally I have a couple of issues with it. Firstly, although there’s some ability to be creative, most of the puzzles are fairly prescribed. It’s very good at making you feel like you’re coming up with the solutions, but the sandbox that House House offers isn’t quite as free as it might initially appear. The second issue is much more straightforward – I wish there was more of it. I can’t see anybody taking longer than two hours to finish the game, stretching to three to include the extra tasks you’re given upon completion. It’s worth noting that the game is priced accordingly, costing you just over a tenner. But I could easily have played it for twice as long. The blend of gentle puzzling and comical chaos is enormously enjoyable.

Ultimately, it doesn’t go quite as far as I would like it to. Nonetheless, despite looking like a daft bit of fun, I think Untitled Goose Game represents quite a significant design. Games have long held enormous potential for delivering fantastic slapstick comedy. Think of the spectacularly silly bails of Skate 3, or kicking an orc down a flight of stairs in Dark Messiah, or cobbing a toilet at a combine in Half Life 2. But all these are notionally serious games that happen to be comical. If it delved a little deeper into its own ideas, I’d be slapping an outstanding award right on its beak. Slight as it is, Untitled Goose Game still gets one big honk of approval.