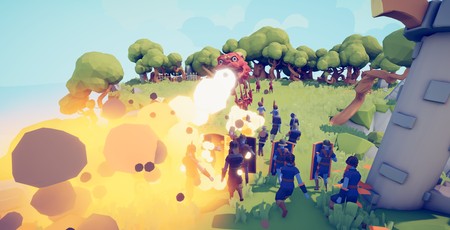 Totally Accurate Battle Simulator is the perfect game to review during a particularly intense period of parenthood-induced sleep deprivation. It requires minimal focus and caters perfectly to an abridged attention span, yet from this generates a massive amount of variety, spectacle, and humour. Basically, you get a lot more out than what you put in, and right now that makes TABS my best friend in the whole world. 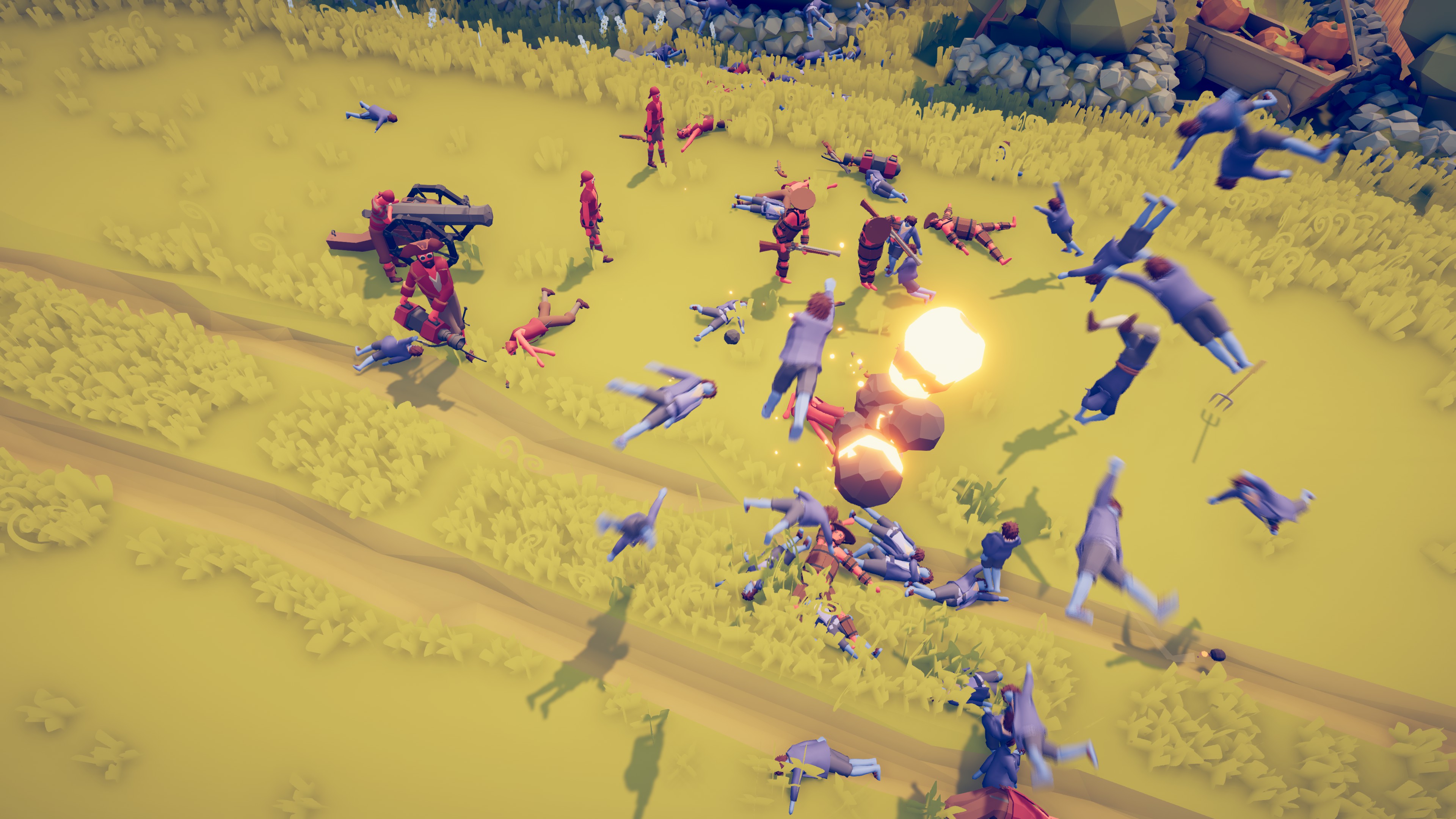 The premise is that classic pub question of “Who would win in a fight between X and Y?” Yet rather than dealing in one-on-one hypotheticals, such as Batman versus Bruce Lee, Totally Accurate Battle Simulator broadens the scope to historical and mythical armies. You can pit cavemen against medieval knights, samurai against Greek hoplites, renaissance musketeers against farmers (that iconic fighting force).

Unlike the local pub bore banging on about why Richard the Lionheart would definitely beat a World War 1 Tank (he wouldn’t), TABS does not try to take its patently absurd question seriously. Regardless of what historical era or myth they derive from, every combatant in TABS is represented as a goggle-eyed, flaccid-limbed mannequin that, depending on which side it’s on, is coloured either red or blue. There’s equally no attempt to replicate authentic battle strategy or combat tactics. Instead, every sword-swing and cannon-shot is powered by the game’s highly elastic physics engine. 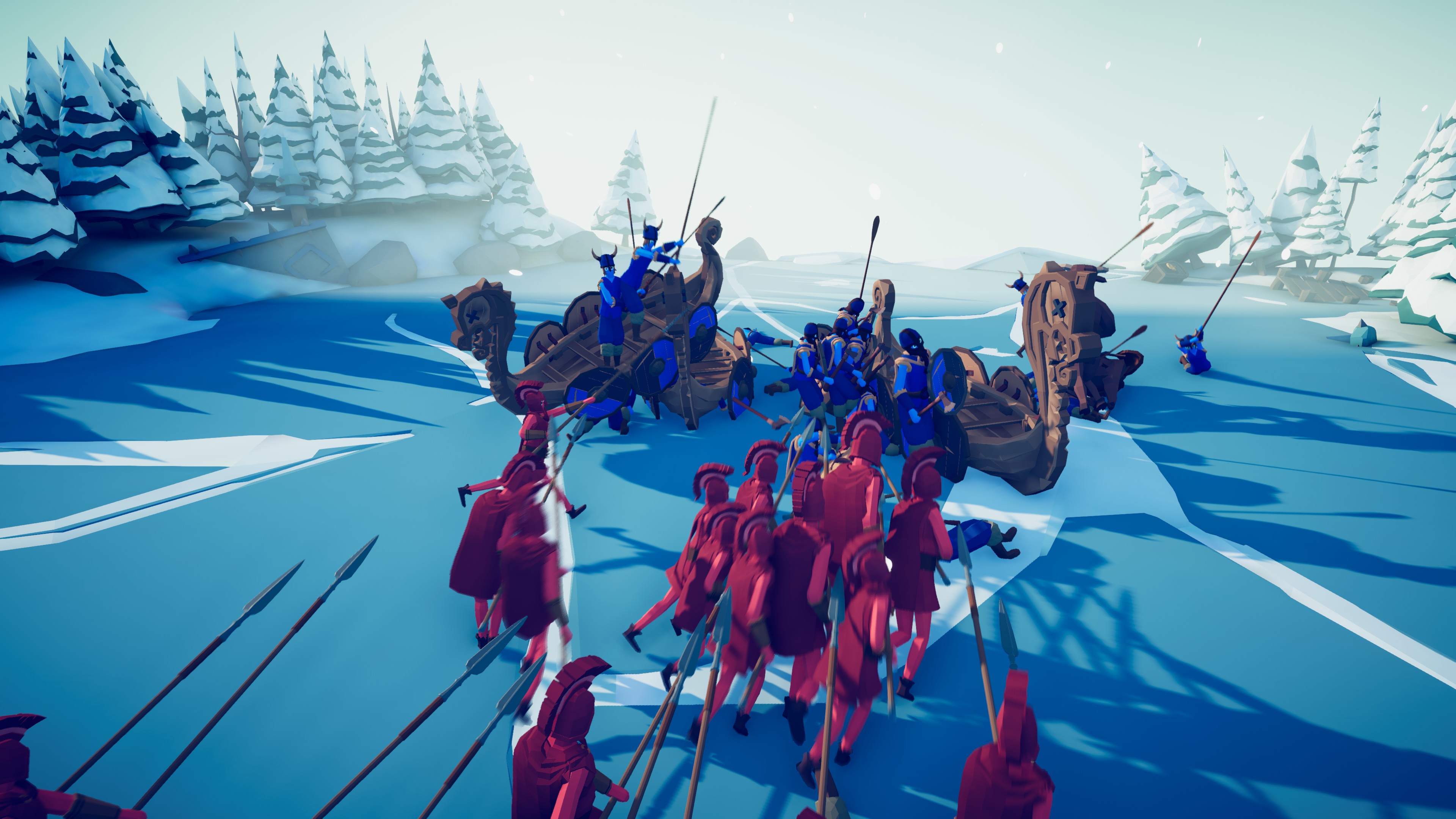 The result is, basically, a procedural comedy generator. Depending on whether you’re playing in campaign or sandbox mode, you arrange either your army or both armies as you see fit. Either way, the result is the same – a ridiculous debacle. Simply watching two lone enemies duel is hilarious. They flail around like drunk toddlers armed with pool noodles, often missing each other entirely and falling over with a wet slap. At the larger scale, bodies often end up flying like meaty confetti, whether they’re struck by a particularly powerful blow, or by artillery weapons like cannons or boulders.

TABS is naturally amusing, but it doesn’t rest on those ticklish laurels. Considerable effort has gone into making it both funny and a proper game, one with enough structure and strategy to keep you invested. On the funny side, this comes down to developer Landfall deliberately cranking up the absurd factor. Your armies don’t fight silently. They grunt, squeal, jabber and honk at each other as if they’ve all stumbled into an episode of Pingu. There are several nice visual touches too, like how the goggle eyes turn into black-crosses when units die. 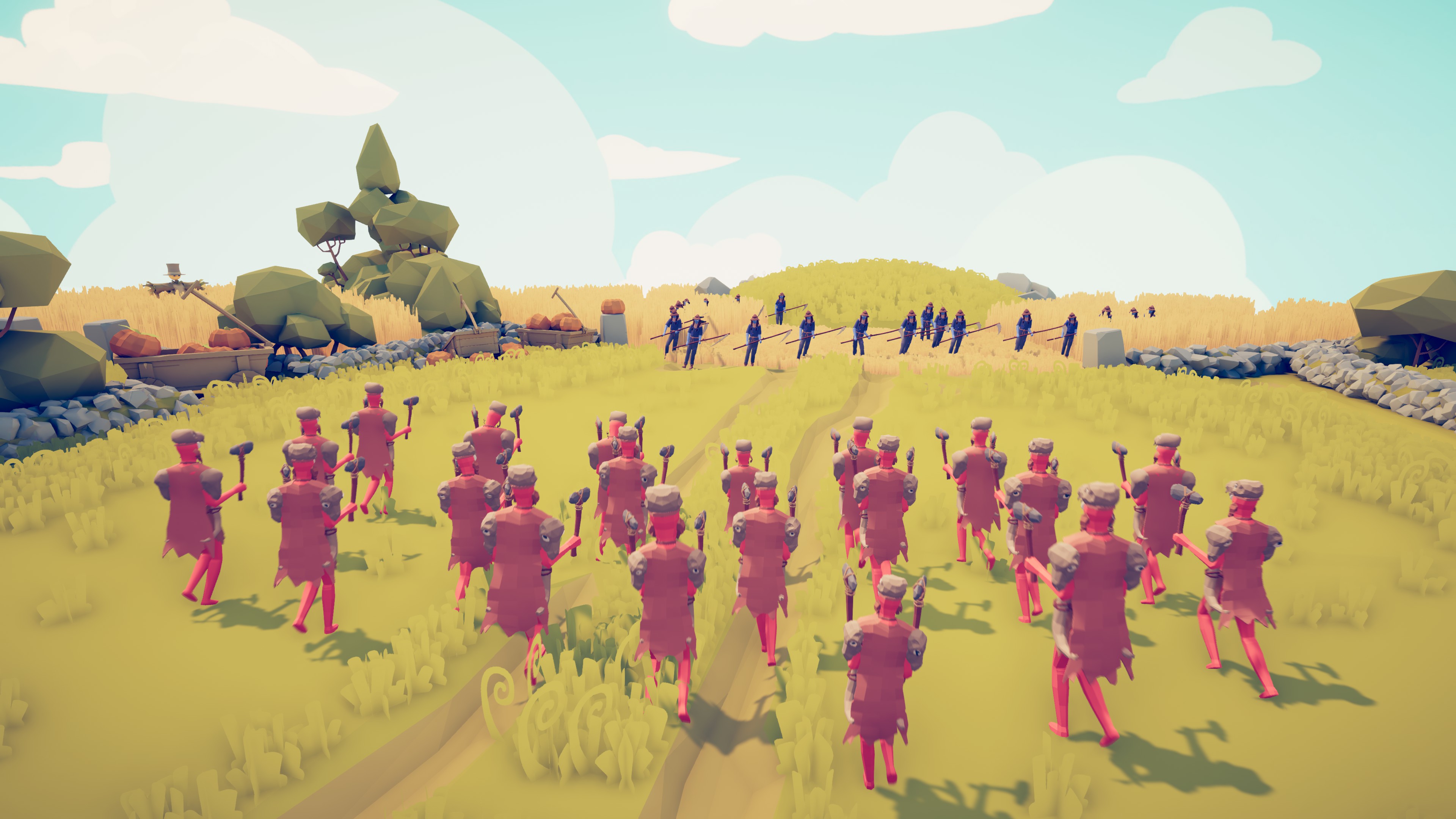 Most of all though, the humour derives from the units themselves. While most armies include the expected fundaments of a fighting force (the cavemen have clubmen and spear-throwers, while the medieval army has squires, archers and knights), most armies also feature more eclectic units. The Renaissance forces, for example, have balloon-archers, who attach inflatable hydrogen balloons to their arrows which pull struck enemies into the sky, then explode, plummeting them to the ground. The Dynasty faction, meanwhile, has Ninjas who can throw shurikens at an astonishing rate, alongside a ballista-type artillery weapon that can unleash a massive volley of arrows. A couple of the factions are ludicrous from the ground up. The farmers’ ranks comprise of halflings and bottle-throwing potion sellers, while the pirates have barrel-wearing blunderbuss wielders who are frequently knocked down by the recoil of their own weapons.

It’s the gaming equivalent a KFC variety bucket – fun, messy, and entirely free of nutritional value. Or at least, it would be without the campaign mode, which adds structure and strategy to TABS’ anarchic tendencies. There are actually multiple campaigns, including a tutorial campaign, a couple of challenge-based campaigns, and several faction-specific campaigns. Each of these comprises numerous battles where you’re given a set army you need to defeat. You’re given a pool of cash to spend on units, which varies depending on the size and type of army you face. Sometimes the game will also limit you to a particular army type, but you can usually mix and match. 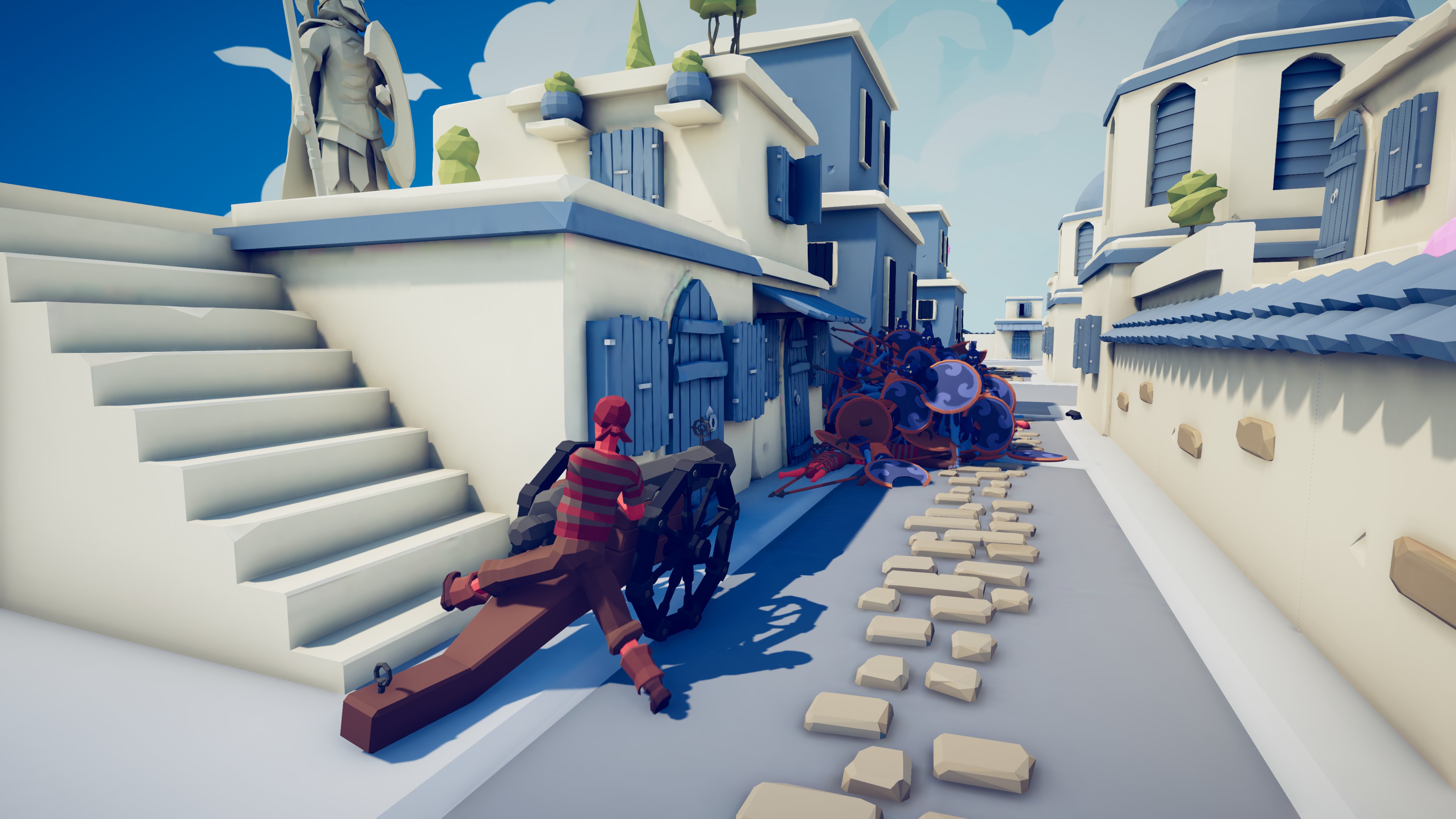 What quickly becomes apparent is that the type of army you field has a genuine impact on your chances of victory. I would often field armies comprised entirely of a single unit type, and I was amazing how an army of ninjas could utterly annihilate the enemy in one level, then get battered all the way back to Japan on the next. Crucially, while there’s probably an optimal way to complete each level, there’s rarely a “right” way to approach them. TABS keeps most of its challenges open-ended, and if you’ll fail the first time, you’ll almost certainly succeed by your third attempt.

TABS has a straightforward premise executed brilliantly, and as such it has little in the way of problems. One could argue it isn’t a particularly deep game, but one could easily counterargue that this is part of its appeal rather than a flaw. TABS also isn’t short on content either. The combined campaigns easily amount to between 10 and 20 hours of play, and beyond that there’s downloadable custom campaigns, and a multiplayer which offers some of the most fun single-screen competitive action since Worms: Armageddon. 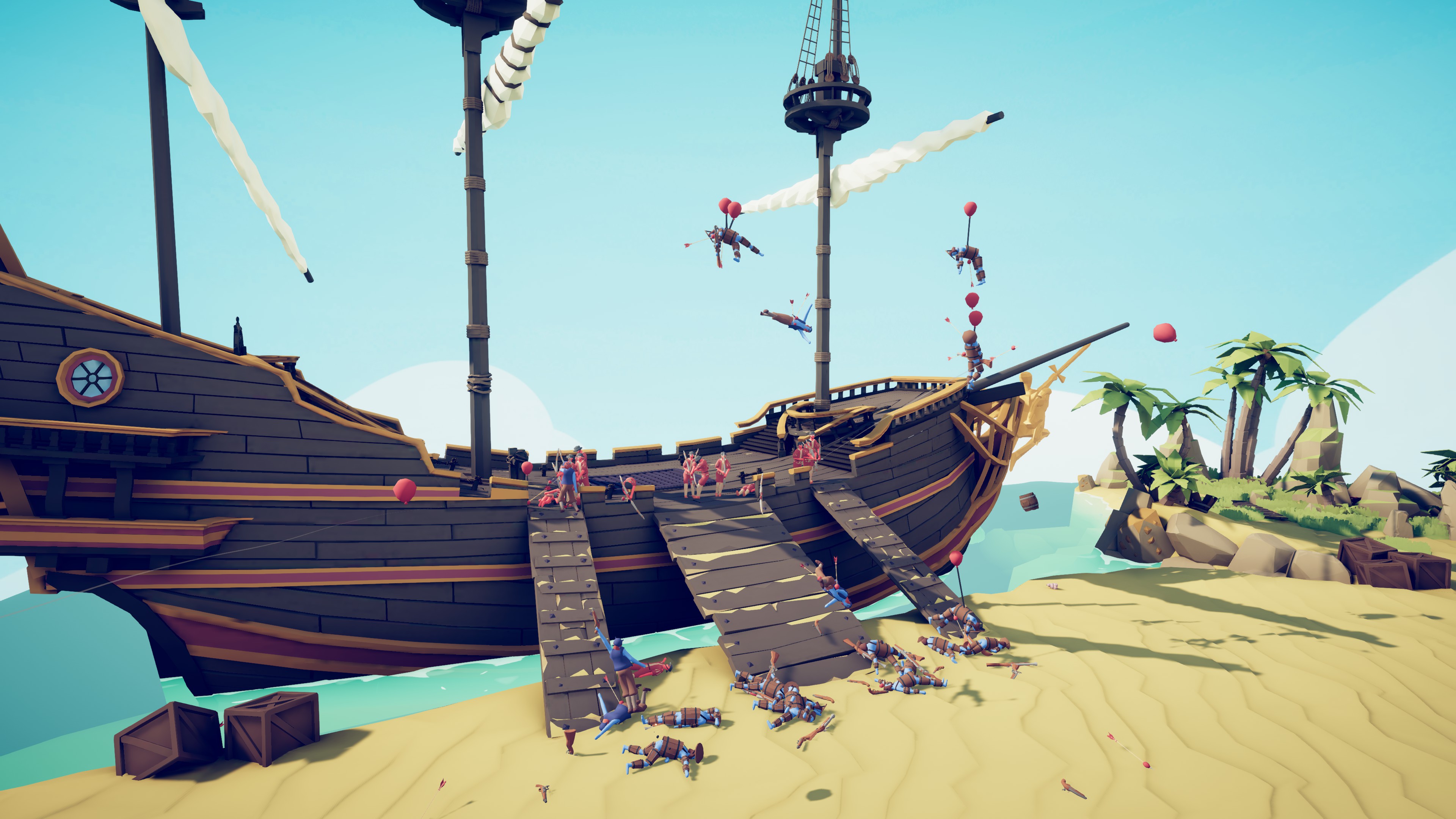 TABS is a brilliantly daft distraction, playable for minutes or hours. It’s silly and disposable, but also has just enough nuance to it to keep you gripped. If you want a game that is simple, pure, unadulterated fun, then wobble over to Steam and flail it into your library. 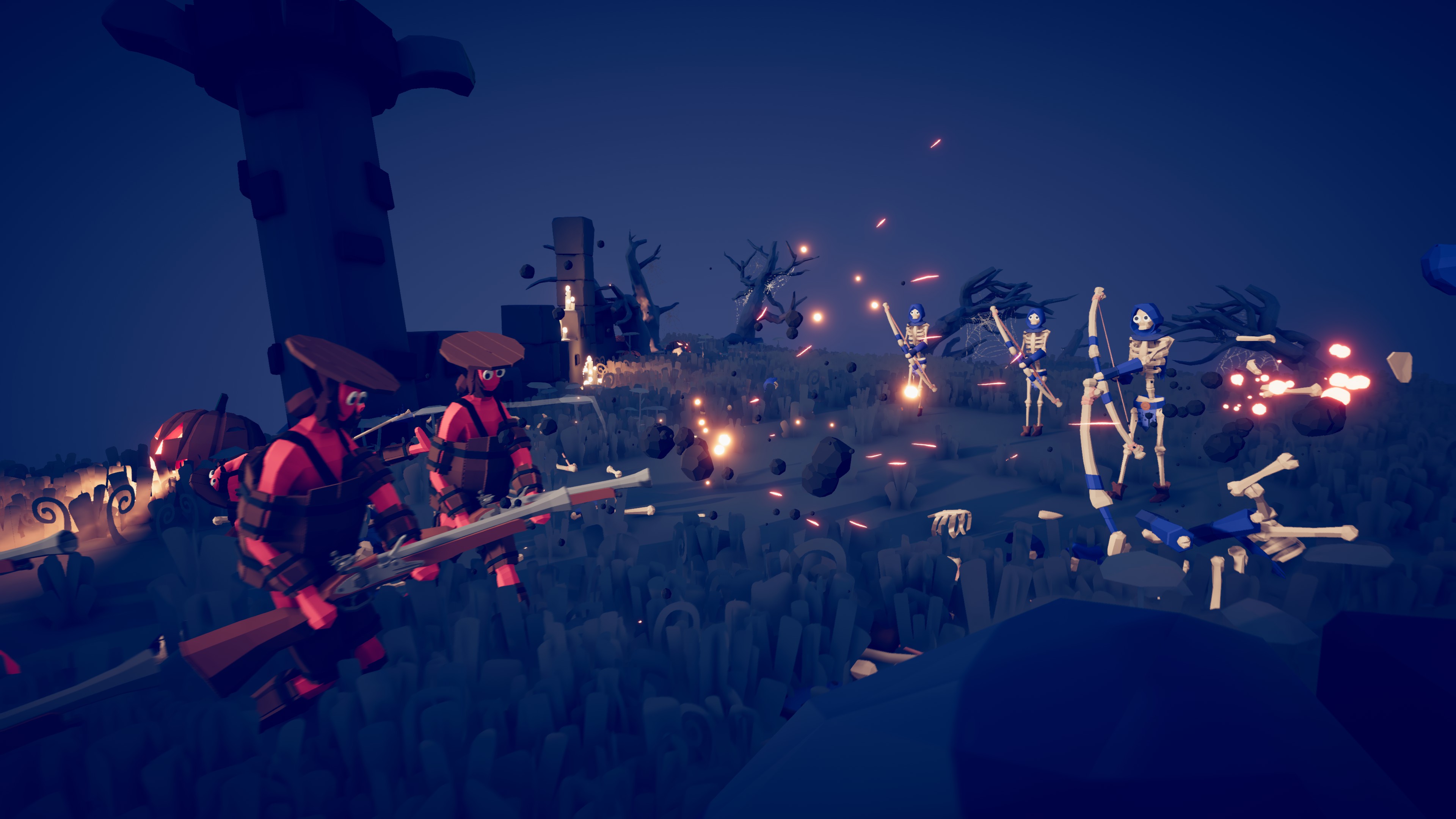