If there’s one aspect of The Witcher 2: Assassins of Kings that’s worth singling out, it’s the fact that it’s not afraid to punish you when you make a mistake. This fact, more than the gorgeous graphics, the stellar script or the incredible depth that’s been built on and around Andrzej Sapkowski’s lore, is what defines The Witcher 2.

This quick-to-punish ethic isn’t a bad feature either, although we predict that most reviewers will downplay its significance with a meaningless ‘old-school RPG’ label. The Witcher 2 is anything but old-school; rather, it presents a hopeful future for the RPG genre based on respecting and challenging players in equal measure.

The type of challenge that The Witcher 2 so brilliantly epitomises is best represented through the way it asks players to figure matters out for themselves. At the start of the game, you're shoved once more into the boots of Geralt, famed mutant and monster hunter, who finds himself in the employ of King Foltest after earning the monarch’s favour. Foltest is in the midst of a rebellion, and is using Geralt as his personal bodyguard while he tries to reclaim his children and kingdom. Meanwhile, just out of sight, other forces start to close in.

Click to enlarge
This section of the game forms The Witcher 2’s tutorial section, but there’s very little attempt to guide players through the intricacies of the lore or the game systems, other than a few quick tool-tips. Instead, CD Projekt has embedded the crucial information in Geralt’s journal, and left players to sort through it themselves as they need. All the info you need is there, so there's no reason to feel flummoxed, but it's not shoved down your throat and so you're left with a beautiful sense of freedom and agency.

This approach is then replicated throughout the rest of the game, with players who want to get the most out of the world encouraged to plumb its depths themselves and see what they find. When Geralt is asked to rid a forest of Nekkers in the first truly open town, for example, he needs to visit the local bookseller and learn more about the animals before he can form a strategy that’ll let him resolve the mission. There’s little overt guidance to lead you this way, but it’s implied through Geralt’s character and the tone of the world; earthy and cautious. The world itself becomes both a way of telling the story and a method for supporting the design. It's brilliant.


Check the Bit-Gamer trailers section for more Witcher 2 trailers
This focus is such that it goes a long way to correcting one of the biggest flaws in the original game too, working to infuse The Witcher’s amnesiac sword-slinger with a greater sense of character and charisma. He’s still gravely-voiced and stand-offish with nearly every character he meets, but as a flinty-eyed investigator he’s brilliantly realised, especially when contrasted against his more human companions.

Speaking of which, a lot more work has gone into fleshing out Geralt's main companions - bard Dandelion, sorceress Triss and grumpy-guts Zoltan - on both an aesthetic and narrative scale. Not only do these characters tend to shadow you through the plot, sharing quests with you and often providing guidance, but there's more literal flesh too. CD Projekt's use of nudity comes across all the better now there's a new engine (CD Projekt's own RED Engine) powering the game, although we were most happy to see that the collectible 'encounter' cards of old have been abandoned. 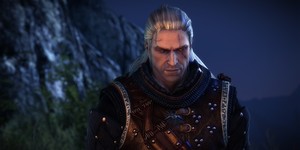