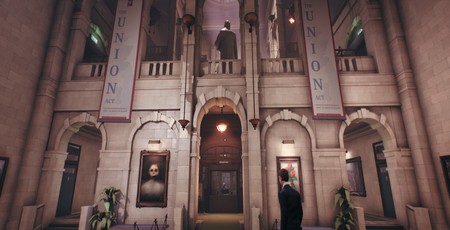 The Occupation does a lot of clever things, but perhaps its most striking innovation can be found in Steve, the affable yet infuriating security guard who is a pleasantly incessant thorn in your side throughout the game. Steve is like a friendlier version of the Xenomorph in Alien Isolation, a noodle-like American who hunts you wherever you go, albeit with a torch and a weary sigh rather than a body made of knives and acid. Nevertheless, you’ll crawl through vents and hide under desks to avoid him, whispering 'Go away!' as he stands gormless, mere feet away from you. One thing separates Steve from the Xenomorph, and every other wandering guard that has appeared in games since the days of Thief. Steve remembers. You can run away from him and eventually he’ll give up chasing you. But he won’t forget that he’s seen you, and next time you pass him in the corridor, he’ll pull you to one side and quietly warn you about entering restricted areas. What’s more, get caught trespassing enough, and you’ll be taken to the security office for a sterner warning.

It’s one of a range of features that I love about The Occupation, which straddles the line between narrative adventures like Firewatch and a Thief-like immersive simulation in a truly delightful way. In fact, it would probably be my favourite game of the year so far if it wasn’t quite so tragically broken. Taking place in an alternate 1980s Britain, The Occupation places you in the tweed jacket of Harvey Miller, a celebrated investigative journalist. Miller’s latest investigation concerns Bowman-Carson facility, a private corporation working for the government that has just recently been bombed. The company is behind the creation and implementation of the Union Act, a controversial act that is designed to clamp down on immigration and deport migrants from Britain.

If that sounds curiously topical, well oh boy is it. It’s worth noting The Occupation has been in development for over four years, so the timeliness of its subject-matter is somewhat coincidental. Nonetheless, it’s rare for a game to feel so hotly on the button with a contemporary issue, and it’s fascinating to see how The Occupation draws comparisons with Britain’s own debate about migrants, particularly how the issue is often used as a smokescreen to distract from or advocate for more oppressive or intrusive government measures. The storytelling is, frankly, superb, not just in plotting but in the whole construction of the world. The writing and voice-acting are excellent, and characterisation is particularly strong. The dozen or so NPCs in the game are rarely painted in black and white – the guards being a  great example. Steve may be the perennial spanner in your works, but he’s also an extremely cheery, likeable fellow. He wants to be an actor, and as he wanders around, you’ll hear him quote from famous films, try out different accents, and repeats a lot of self-affirming mantras. It’s a brilliant way of using character “barks” to imbue personality in an NPC.

Importantly, while the story is nuanced, it doesn’t use ambiguity as a narrative cop-out. The key antagonist, a man named Charles Bowman, is clearly not a pleasant person, and the game makes you want to nail him to the wall with your investigation. As you delve deeper into the bombing, however, it becomes clear that the circumstances surrounding it are far from straightforward, while Bowman himself is a more complex character than is initially apparent. As for how you investigate, The Occupation is at once familiar and yet surprisingly different. The game takes place over a fixed time period of four-and-a-half-hours, divided roughly across four levels. The first two of these levels conclude with an interview with a key figure at Bowman-Carson, during which you can ask questions about the bombing, the Union Act, and so forth.

If you want to you can just hang around and admire the scenery while you wait for your interview slot. Your vanilla questions are not particularly probing, however, so it’s wise to use that free hour to investigate, chasing leads that can reveal crucial evidence, allowing you to ask more probing questions at your interview.

Following these leads requires you to solve some complex and impressively open-ended puzzles. Structurally The Occupation’s levels resemble a smaller-scale Thief or Dishonored, each a complex and highly detailed space that you can explore in multiple ways. For example, many areas require a keycard to enter, so the logical approach is to find the corresponding keycard. But you could also find a fuse-box and switch off the power to that room, disabling the keycard gate, or gain access via that great immersive-sim staple, the ventilation shaft. Alongside flexibility, there’s a wonderful tactility to The Occupation’s puzzles. Many will require you to rifle through drawers, search filing cabinets, and scan computer terminals for incriminating documents. Often you’ll need to transport files from one computer to another via floppy disk, so you can either print out the document or fax it to your editor. It’s a game in love with buttons and switches, of pulling and pushing things. Perhaps a little bit too in love. Most interactions require you to click and hold for it to take effect, which can make the game feel a little clumsy at times.

The chances of resolving every lead in your first play-through are slim. It takes time to familiarise yourself with the environment, the abundance of information in each area, and, crucially, the routines of each NPC. Knowing when a character will leave their office for a bathroom break or to attend afternoon prayers can be crucial to snoop around without getting caught. Fortunately even if you fail to find any leads whatsoever, you can still complete each chapter, while the ending will provide a satisfying amount of closure. Nonetheless, I think the fixed-time element will be the most controversial aspect of The Occupation. I myself bounced between loving it and hating it several times while playing. There’s no question that it contributes hugely to the atmosphere, adding another layer of tension to sneaking around. Each time you need to hide from a security guard costs you precious minutes, so stealth is doubly fraught. That said, I think an hour per level is too short, as it means on your first playthrough you barely have time to familiarise yourself with the environment before the time is up.

If this was the game’s only problem, I’d be slapping awards all over this baby. The Occupation is bold, ambitious, and clearly made with a huge amount of love. Sadly in its current state, it’s also extremely buggy. I’ve seen my best buddy Steve get completely stuck on world geometry multiple times, teleport from one area to another, and accost me for being in a restricted area when I wasn’t. Other bugs include an infuriating issue that constantly “corrupts” floppy disks you’re carrying, regardless of whether you walked through one of the magnetised security checkpoints or not, and some extremely spongy traversal mechanics that makes climbing onto surfaces far harder than it should be. Most depressingly, I’ve encountered several leads that were simply broken, or at least I think they were. One lead involves cracking a hidden safe that, if done in the wrong way, means the contents of the safe simply don’t appear, preventing you from resolving the lead. Another asks you to retrieve an item from inside a car’s glovebox which also doesn’t appear when you look for it either.

I could forgive a few technical hitches, but these are serious, progress-hindering issues that had me cursing the game out loud. It’s a darned shame. I want to recommend The Occupation more than any other game I’ve played this year, but in its current state I simply cannot do that. Give it a few months, and I think this will be a must-play. Right now, though, like the loveable yet infuriating Steve, it’s one you need to tread carefully around.