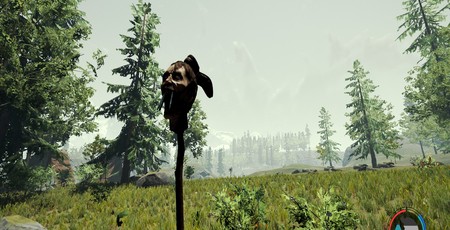 'You cannot carry any more skulls.'

It says a lot about the Forest that, upon receiving the above notification, my initial reaction was, 'Oh man!', and not, 'What in God's name have I become?' Skulls are useful, you see. Stick a candle in one and you can use it as a lamp. Attach one to a stick and you've got a pretty efficient club. I call mine the 'Skull-cracker', see, because it's a skull that you use to crack other skulls hahahahaha. You can't drink out of one, which seems like a missed opportunity, but you can use them to decorate your little forest hideaway, along with various other body parts, but let's face it, nothing beats a good skull... I think this game might have got to me. I should probably stop thinking about skulls.

As you've probably gleaned by now. The Forest is an extraordinarily messed up survival game. I've had encounters in its beautiful but deadly woodland which have left me so thoroughly disturbed that I've had to switch the game off and wrap myself in a blanket. Skulls. But unlike say, Outlast II, which was nasty purely for shock value, The Forest's depravity is part of what makes it such a fantastic survival horror experience. SKULLS. It pits you against AI monsters that act uncannily like humans, and asks you, in order to survive, to what extent you're willing to become a monster yourself? It's important to stress that The Forest is a survival horror game in a much more literal sense of the phrase, placing an equal amount of skulls on both its survival systems and horror elements. You play as a nameless father who is involved in a plane crash, and awakes to see a strange-looking human abduct your son from the plane's shattered fuselage. After waking up a second time, you find yourself in an idyllic-looking woodland abundant with skulls, and you must figure out a way to stay alive while searching for your son and the other passengers missing from the plane. Initially, The Forest plays out like a standard survival game. You need to find food and water, and construct a fire and a basic shelter to protect yourself from the elements. You can keep yourself alive for a day or so by raiding the plane wreckage for soda cans and untouched airline food, but after that you're going to have to source your own nutrition from the wilderness skulls Skulls SKULLS.

Although The Forest was one of the first wave of survival games to land in Early Access, four years on its basic survival systems are more or less as you would expect. Alongside general health, you'll need to manage food and water intake and try to stay dry and warm wherever possible. Shelters are used primarily for saving, although you can rest your weary skull in them to restore energy (which is also restored by putting food in your skull) and cure injuries and illnesses, some of which may be to your skull. Food is pretty easy to obtain, given the abundance of birds, rabbits, and skulls that can be eaten. Clean water is somewhat harder to source, as you can only collect it either in a water collector made from a turtle-shell, or a waterskin that can be crafted from deer hide, both of which can be tricky to obtain. Mostly, though, the survival systems are pretty well balanced, easy to keep on top of if you plan properly but never quite letting you forget about them.

While there's nothing radical about the Forest's core survival mechanics, they are exceedingly well polished and wonderfully presented. Everything you do in the game has a strong sense of tactility to it, from swinging your skull into the truck of a tree, to hauling logs across to the 3D blueprint that marks where your shelter will be. I particularly like the Forest's inventory system, which shows you all the objects you've collected (like skulls) spread out on a tarp, and lets you rummage through them with the mouse cursor, each item clinking and clattering as you hover over it (especially the skulls). It's a superb way of showing you everything you've got to hand in a way that is both intuitive and immersive. The first hour or so of The Forest is relatively peaceful. But eventually they'll come. They always do.  You might bump into them during your second day. But usually, they come in the second night. Grey-skinned and mostly naked, the inhabitants of The Forest appear suddenly, silently. They'll hover around the perimeter of your camp, calling to one another in high-pitched, screechy barks. Some of them will be decorated with tribal paints, others with the bones and – what's that word? Ah, yes. SKKKKUULLLLLLLSSSSSSSS – of their victims. Some of them wield torches and spears, others clubs made from severed hands and feet. And skulls.

At first they'll test the waters, staring you down from a distance, running towards you and then turning away at the last moment. Then one of them might take a swipe at you, or start attacking one of your structures. At this point you'll have to push back, and if you apply the right amount of pressure, you might succeed in scaring them off. But you also might incentivise them to attack you, and at that point your night is going to go really badly. Someone's gonna lose their skull. That first encounter with The Forest's inhabitants is one of the most tense and fraught experiences you'll have in a video game. They're fantastically designed adversaries, with some of the finest AI design this side of Alien: Isolation working away in their virtual skulls. The way they test and bait you, trying to figure out precisely just how dangerous you are, is astonishingly lifelike. This has the bonus effect of making every encounter with them rife with tension, as you can never be sure how the situation is going to go down, whether they'll just sniff around you for a bit and run off, or whether you'll have to fight for your life. Negotiating the wordless politics of The Forest takes a lot of... skill.

The convincing portrayal of The Forest's inhabitants also means that your own humanity can work against you. Clearly how they live is monstrous, the way they torture, mutilate, and eat other people. But you're also aware that you're an intruder into their territory, and because they don't attack you on sight, it's worth trying to avoid a confrontation to make your life easier. Nobody likes butting heads like that. It damages your skzzzz no stop it STOP IT GET OUT OF MY HEAD SHIT FUCK SHIT SKULLS. There are times when you will have to fight, however, and that's when the Forest truly begins to reveal its brutality. Smack a cannibal around the head, and teeth will burst from his skull like freshly popped corn. Hit them enough and they'll collapse to the floor, slick with blood and breathing shallowly, and you'll have to finish them off. The saga doesn't end once they're dead; you could leave the body for the flies, but you could also take it home with you and make use of it. You could burn the corpse in a fire and use the bones to make armour, or cut it into pieces and build an effigy to ward off other intruders. Or just eat it, if you're desperate enough. Or if it's convenient; who am I to judge? Me, with my mountain of skulls.

See, The Forest's horror is such that committing such atrocious acts soon begins to feel like a perfectly normal and rational response. Beyond the local tribes around the crash site are far more disturbing terrors, lurking in deep caves and high in the snowy mountains, things so mortifyingly unpleasant that they remind you you're not a monster, not really. You need those bones to stay alive. And that effigy you built out of seven arms and three legs? Well, that's just a warning to avoid more bloodshed. You didn't build it because you're a terrible person, you built it because you're a decent one. The game is so clever in how it lets you slide from being a victim of its horror into an active participant of it. It makes having a big pile of skullsSkullsSKUllsskULls in your inventory seem normal. There are a few flaws evident in The Forest. While the area around the campsite is visually stunning, some of the environments beyond it look a little rough around the edges, with flat textures or strangely barren-looking landscapes. Also, and I guess this isn't a flaw as such, but it's worth reiterating, this Forest is really, really nasty in parts. I descended into one of the game's various cave systems, and what I found down there, and what I had to do to escape, well, let's just say I didn't sleep very well that night. Brr. Oh, and of course, the limit on the number of skulls it allows you to carry is far too low. But it's also more than most other games, so it feels churlish to complain. SKULLS SKULLS SKULLS SKULLS SKULLS SKULLS SKULLS.

With the exception of Subnautica, The Forest is probably the best survival game out there. Its survival systems are comprehensive and well balanced, its crafting and building mechanics are elegant and tactile, its AI is scarily convincing, and the way its horror infects you from the skull down is mightily impressive. Oh, and you can also experience the whole thing in cooperative multiplayer too, enabling you to share your descent into depravity with a friend, while also doubling the number of skulls you can collect. And if that isn't reason enough to pick up The Forest, then I don't know what is.