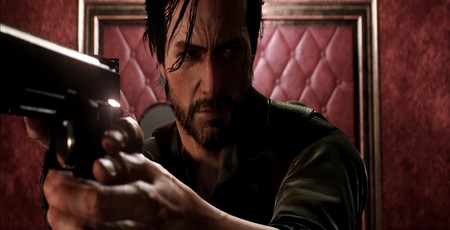 Well, this is a surprise. I wasn't expecting to like The Evil Within 2. Although I enjoyed the first Evil Within in parts, overall I thought it a confused and frustrating survival horror that played like a famous frontman covering his old greatest hits with a new band. The news that the sequel would adopt a more open-world structure did nothing to stoke my enthusiasm. The last thing I wanted from The Evil Within was for it to be padded out with side-quests. Sometimes it's nice to be wrong. The Evil Within 2 is a big improvement over the original. Its horror remains resolutely B-movie, and the writing is inconsistent at best, but the broader structure benefits the game massively, striking a deft balance between open-world exploration and more linear sequences, resulting in a far more enjoyable horror adventure.

In what appears to be a running theme this month, however, things don't start off well. The Evil Within 2 takes place several years after the original. We reunite with protagonist Sebastian Castellanos in an Irish bar, trying to drink away the memories of his daughter's death in a house fire some years before. Enter a group of shady looking individuals from the Mobius organisation, who inform Sebastian that his daughter is in fact alive and is being held captive as the centre of an ongoing STEM experiment, whereby human minds are connected together to build coherent, lucid dreamscapes. Unfortunately, the experiment is going awry, and Mobius need Sebastian's help to pull his daughter out. Admittedly, it's quite hard to make the above plot sound anything other than laughable, but that doesn't make the introduction any less appalling. The dialogue is cringe-inducingly terrible, and the whole sequence is a conveyor-belt of clichés. It also takes a while for the game to get going proper. Even once you've been plugged into STEM and are inserted into The Evil Within's strange and fractured world, the first chapter is a lengthy and restrictive linear sequence during which the game introduces its primary antagonist.

Fortunately, once you've picked up your first gun and stepped into the imaginary town of Union – the setting for The Evil Within 2 – the game improves enormously. Like the first game, the world you explore is fragmented and can change unpredictably. In this case, Union is broken into three hub-like areas that are connected by a set of underground (although 'subconscious' is probably a more appropriate word) tunnels grimly nicknamed the Marrow. Hidden within these areas are linear offshoot levels that transport you to wildly ranging locations, such as a forested nature reserve, a medieval dungeon, and an art-gallery lined with maroon curtains that strongly evokes the Black Lodge from Twin Peaks. As I said, initially I was sceptical about the more open-world structure. Yet it works well both thematically and mechanically. One of the main problems with the first game was you never really understood why anything was happening. The game would leap wildly from scene to scene with little in the way of connective tissue. The intent was clearly to give you the sense of being trapped in a nightmare, but the effect was overdone, making it more confusing than terrifying.

In The Evil Within 2, the town of Union provides this idea with the cohesion the first game was sorely lacking. Exploring the town, doing side missions and chasing down radio signals all provide you with moments of relative respite in between the stranger and more intense linear sections. But these areas act to enable the horror too. You might round a corner in a cluster of enemies and find yourself fighting for your life, while seeking out a dead Mobius soldier to retrieve his ammo might lead you into a ghostly trap. Crucially, Tango Gameworks doesn't over-egg the pudding. The hub-areas are substantial, but not massive, and there are only a handful of side-missions, all of which are hand-crafted. The meat of the game still resides in the linear story sections, and for a schlocky B-movie horror game, it proves to be quite a good one.

Although the game begins dreadfully, the story quickly picks up momentum. What starts out as an awkwardly written knot of sci-fi gobbledegook evolves into something much more earnest and heartfelt. A mid-game twist sees the story change direction in a way that's both surprising and satisfying, as Sebastian's quest to save his daughter becomes even more personal and introspective than it was before. The writing improves considerably as the game trundles along too. It never quite loses its capacity for dropping the odd clanger of a line – the introduction of psychologist Yukiko Hoffman is painfully awkward – but these become outliers in otherwise fairly naturalistic conversations and the odd bit of genuine emotional gravitas. Amidst all this are some fantastically surreal horror sequences, such as those in which you must enter the grisly photographs of a serial killer with artistic aspirations, battle a bizarre camera-monster named Obscura, and descend into the chasm of Sebastian's guilt over his dead (but not really) daughter. As with the first game, the monster designs are wonderfully twisted. My favourite is probably the giant, giggling assemblage of limbs that occasionally appears to attack you with a circular saw. It's phenomenally unpleasant, continuing to cackle to itself even as it dies.

Despite the eclectic nature of its monsters, The Evil Within 2 isn't especially scary. By and large the game has more of an action bent, frequently requiring you to pull out one of your many powerful firearms to pop enemy heads, triggering thick gouts of blood that are almost comically over the top. The combat is slicker and more refined than the first game, movement is smoother and controls tighter, and there's no longer a requirement to burn enemies with matches to ensure they stay dead. There are a few issues, however. The cover system doesn't really work. It's sticky and unresponsive, and while you can turn around corners in cover, you can't hop from one piece of cover to another as in, say, Gears of War or Mass Effect. Frankly, the game has no need of a cover system, as none of the enemies you face have guns (aside from a few at the very end) and simply crouching behind cover obscures you from an enemy's vision anyway. Furthermore, as with the first game, The Evil Within 2 contains a crafting system and a skill-upgrade system, neither of which I think are necessary. The ability to stockpile crafting components bleeds the tension from the game, and although there are a few interesting skills in the upgrade tree, such as the ability to perform stealth-kills from around corners, most of the upgrades it offers could have been baked into the open-world directly, removing the need to constantly backtrack to the sanctuary of “Sebastian's Room”.

Technologically, The Evil Within 2 improves over its predecessor. The new STEM engine is far more efficient than the previous game's vanilla id-tech 5, with few performance or visual issues such as texture-pop evident during play. The game includes a full-fledged suite of graphics options to tailor the experience to your system, including FOV sliders and multiple antialiasing solutions, alongside options for both keyboard and controller play (although finding the key-binding menu proved a little tricky). It's also worth noting that the controversial “black borders” of the first game have been removed, which means you no longer feel like you're squinting through a letterbox while playing. The worst thing you could say about The Evil Within 2 is it plays things a little safe. There's nothing hugely original or innovative about the sequel, while many of its design decisions revolve around paring back the more contentious elements of the first game. That said, the new open-world structure could easily have ruined the game instead of significantly improving it, and although the story initially appears trite and poorly written, it evolves into something that's surprisingly affecting. The Evil Within 2 is unlikely to win any end-of-year awards, but it is jolly good fun nevertheless. Brilliant at times, The Evil Within is hindered by confused overarching design.