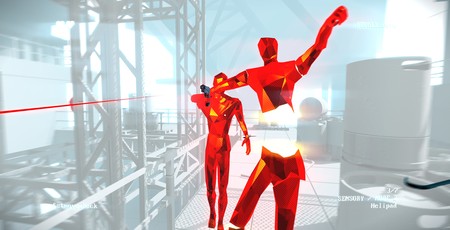 While officially a standalone expansion pack, Superhot: Mind Control Delete is a sequel in all but name. This follow-up to the 2016 original expands upon the fantastic time-manipulation gunplay that made the first game so compelling, while also radically changing the central structure to create a longer and more dynamic experience. The result is every bit as stylish and captivating as Superhot was four years ago, although the game’s aloof approach to storytelling can grate on the nerves. As with Superhot, Mind Control Delete’s key gimmick is that the world exists in a perpetual state of bullet time, linked to your in-game movement. Stand still in Superhot’s crystalline world and it will stand still with you, enemies frozen in position, bullets lingering in the air like deadly hoverflies. The moment you move or look around, however, the game begins to spool up, eventually hitting real-time if you move consistently for more than a few seconds.

What results is essentially a stuntman’s dreamland. Tying time to your in-game movements lets you create your own fight choreography on the fly. You’ll loose a few shots at an enemy, watching the bullets burst his chest into glass shards before spinning around to face another opponent closing in on you. Gun empty of ammo, you’ll chuck the useless weapon at this second adversary’s head, then catch his shotgun out of the air as he drops it, before turning the barrel at his midriff and blasting him to smithereens. At the outset, Mind Control Delete’s core combat is basically the same as it was in Superhot. What isn’t the same, however, is the structure of the campaign. Rather than being a standard linear shooter, Mind Control Delete instead adopts a more rogue-like structure. After a few introductory levels, you’re presented with a 2D ASCII maze you can freely navigate via “nodes”. Each node contains a randomly assorted selection of levels that must be played through in sequence. If you die at any point during that sequence, you’re sent back to the start and the levels are rearranged.

Repetition is a key theme of Mind Control Delete, which is ballsy considering one of the worst criticisms a game can receive is that it is repetitive. To an extent MCD practices what it preaches. You’ll be more familiar with MCD’s level roster than you are with your own house by the time you finish the game. New levels are drip-fed into the roster as you progress deeper into its ASCII maze, but not regularly enough that you won’t play those initially introduced levels dozens of times. Indeed, MCD risks becoming achingly monotonous, but is spared the criticism of tedium by two key features. Although the levels repeat often, the arrangement of enemies inside them is always different. You don’t just fight Superhot’s standard orange thugs in MCD either. New types of enemy are introduced, such as alabaster opponents who only have one weak-point, and spiky dudes who explode in a shower of shrapnel when killed.

This alone adds a lot of dynamism to Superhot’s combat, but alongside this MCD also layers in a wide array of new weapons ranging from assault rifles to pencils, and new player abilities. The latter come in two different forms “Hacks”, are minor game modifiers. Some are straightforward, like refilling or boosting your overall health, while others have stranger effects like causing a shockwave to emanate from you if you lose health, or giving bullets the ability to pierce multiple enemies. Then there are “Cores”, rarer and more powerful abilities you only get to choose one of at the start of each node. One core gives you the ability to charge into enemies, while another lets you swap bodies with any opponent in the level. My favourite core, however, is the “Recall” core, that lets you throw a katana and then call it back into your hand, the blade slicing through anything it encounters on the return trip. The Recall core lets you go full Samurai on levels, slicing up an entire stage with nothing but your sword.

The way MCD incrementally doles this stuff out to you, constantly expanding and twisting and tweaking its killboxes, repeating blocks of levels but never in exactly the same way, is entrancing in a quite literal fashion. These days it’s rare I become completely absorbed in a game, not simply enjoying it but oblivious to the world around me and the passage of time, MCD well and truly sucked me in, I lost a whole couple of evenings to it without noticing, eventually blinking into consciousness to realise the sun had set and I was sat in the dark. From a play perspective, I think MCD is sublime. If you’re after a narrative payoff, however, you may well disappointed. MCD does have a story, told through a combination of flash cards appearing on screen, and scraps of text that you stumble upon as you explore its maze. But it’s wilfully abstract and obtuse that makes it not just difficult to understand, but difficult to understand whether you're supposed to understand it. Like Hotline Miami 2, MCD tries way too hard to be clever, and ends up coming across as snobbish and arch.

Particularly problematic is that, once the game has finished, you’re then locked out of it for two hours before being allowed to play again. Addiction is another core theme of Superhot, and this idea is clearly designed to convey the withdrawal aspect that is a phenomenon of any addiction. While I respect the idea in and of itself, I think the concept would work better if the story was more willing to engage with you directly in its ideas, rather than throwing bits of text of you and expecting you to do all the legwork. That said, I’d be surprised if you hadn’t had your fill of Superhot by the time you’d finished MCD anyway. It’s a bolder, braver and more generous follow-up to the original, and if the price for that is it’s a little bit full of itself, then I’m happy to pay it.