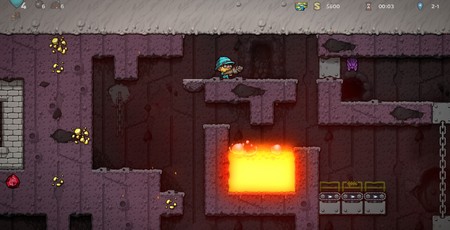 Discussion of Spelunky often tends to revolve around its difficulty, which is unfortunate because the game’s giant-gobstopper levels of toughness really isn’t what makes the game exceptional. That would be its elaborate, clockwork mechanics that lend every new run the potential to surprise like a marathon across a glacier. It’s these mechanics which made the original Spelunky one of the most celebrated games of its day, one of several titles that kickstarted the modern indie game scene. The sequel’s main goal is to add more of this stuff. More enemies, more traps, more gadgets, more ways to be surprised and wrong-footed and hoisted upon your own petard, more ways to be brutalised by an entirely logical and yet equally unpredictable arrangement of systems. It’s a wonderful thing to watch in motion. Or at least it would be, were all these wonderful systems slightly less laser-focussed on killing you.

Spelunky 2’s premise is “The same as the first one, only set on the Moon.” You can play as several characters in the adventure, but the canonical one is Ana, daughter of the original game’s protagonist whose name I can’t remember [a subsequent search via DuckDuckGo informs me that he doesn’t actually have a name, and is simply known as “The Spelunker” or “Spelunky Guy”]. Entering into a mine on the Moon’s surface, you then embark on an ever-descending journey through randomly-generated levels that start off harder than Eddie Hall’s bedsprings and gets more challenging from there. At a basic level, the game looks and plays exactly like the first one. The base controls are simple and easy to comprehend. Your main interactions are jumping, grabbing, throwing, and the ability to attack enemies and smash breakable objects with a pitifully short whip.

Also like before, most of the game’s complexity lies in the enemies, traps and objects that populate the environment, all of which are subject to systems that are designed upon universal rules. The best example of this is in one of the first traps you’ll encounter – the arrow trap. If you leap or drop through the horizontal plane on which the arrow-traps sits, it’ll shoot a single arrow out at high speed which, unless you’re very lucky or very far away, will skewer you more efficiently than Jeremy Paxman running a kebab shop. Crucially though, it isn’t only you that can set off the arrow trap. Anything dropped past it (or thrown upward into its path) will trigger the trap. It could be a rock, an enemy, even an arrow from another trap. Spelunky’s whole world is arranged in this manner. A knocks over B and B knocks over C. But A can also knock over C, and in the right circumstances, C can knock over C too.

Every in-game object is interlinked in this highly logical manner, which is ironic considering the absolute chaos that often stems from these systems. In adding considerably more objects, Spelunky 2 massively expands the game’s chaotic potential. An early example is the mole, who appears in the first area and is probably the creature who will give you the most initial grief. Able to burrow into the ground and pop up at random, the mole excels at taking you by surprising, forcing you to quickly leap out of the way, which in Spelunky can get you into all sorts of trouble. Other new enemies include lizards that curl into a ball and roll at you and Tiki witchdoctors who are followed by an aggressive spirit that can attack you through walls.

As for broader changes, Spelunky has a slightly more open structure, letting you choose between two different areas once you reach the end of your current one. Individual areas are also more geometrically complex, with secret passages that might lead you to rare objects, or simply acting as a safer way to traverse a section of the level. The adventure mode also sort-of lets you save your progress, letting you pay for a “shortcut” to be built to the end of a stage. It takes several successful runs for the shortcut to be completed, however, so you’ll still have to face the full force of Spelunky 2’s challenge. You just won’t have to complete it all in one go. Nonetheless, the shortcut helps to compensate for Spelunky 2’s additional difficulty, which is an order of magnitude above even the original. From a completion perspective, I don’t mind the difficulty too much. Any given level can be completed in as little as thirty seconds, so death feels like a natural part of the game, rather than a massive inconvenience. That said, sometimes the game definitely goes too far. One of my biggest Spelunky 2 bugbear is the bear trap. Not only will this instantly kill you when stepped on, where they appear on the jungle level, they’re often extremely hard to spot amongst the vegetation. It’s one thing to fail because you didn’t notice a trap, another when the game is actively hiding them.

My broader issue with Spelunky 2 is that I wish Spelunky’s virtual Rube Goldberg Machine put you at the controls as much as it did the receiving end. Nearly all of the game’s ingenuity is designed with your demise in mind, and I think it’s a missed opportunity not to lend the player more ways to manipulate the game’s systems to their own end. Yes, there are items you can pick up along the way, but these are very transient things, and I don’t think it would have been such a bad idea to expand the player’s standard toolset to go along with the added difficulty level. To do this though, would have required more fundamental changes to the game’s core systems, which Spelunky 2 seems reluctant to do. Indeed, despite the impressive amount of new stuff in the game, ultimately it’s a safe sequel. Very well made, but safe. Spelunky fans and challenge addicts will undoubtedly love it. But if you weren’t sold on the first one, don’t expect Spelunky 2 to change your mind.