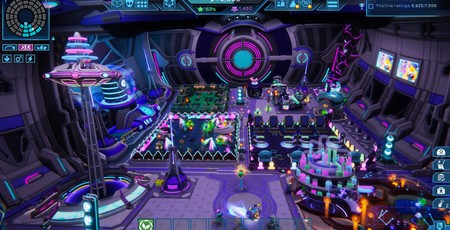 I’ve had varying negative reactions to games over the years, ranging from frustration through apathy and disappointment, all the way up to the occasional case of being downright offended. But I’ve never felt actively bullied by one before. Even in games like Dark Souls that mandate the frequent flattening of the player, there’s nothing personal in that hostility. It’s merely the way cursed ancient beings react when some ironclad ant rolls into their crib to shave the dry skin off their feet. 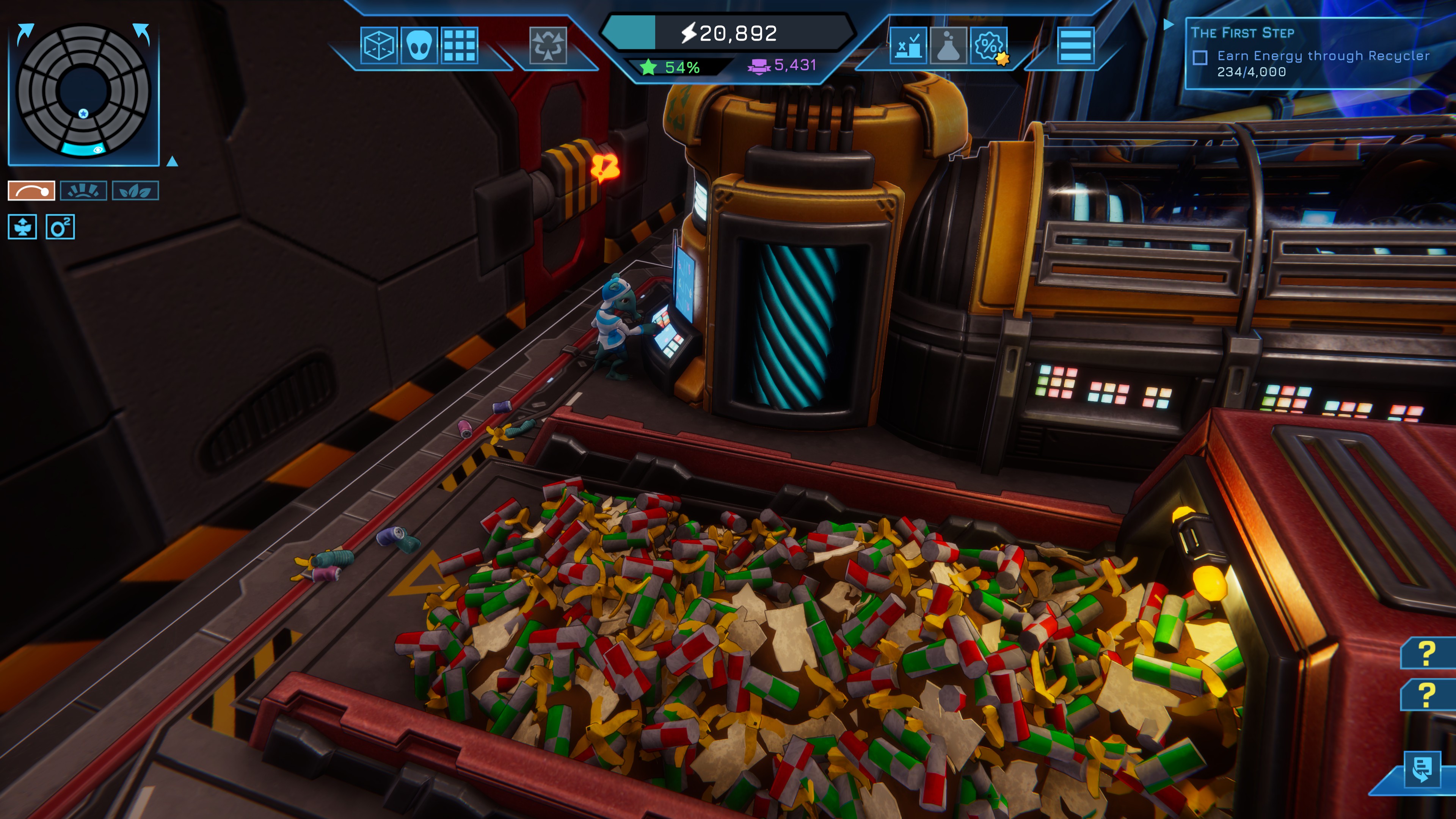 So it’s quite an achievement that Spacebase Startopia, supposedly a light-hearted game about building a space station, made me feel so utterly miserable about myself. Its thoroughly unpleasant attempts at humour resemble one of the most spectacular comedy misfires I’ve encountered, immediately putting me at odds with what is otherwise a passable, if deeply uninspired, management sim.

The game is a direct reboot of Startopia, an underappreciated management sim from the mid-2000s. As with that game, Spacebase Startopia tasks you with establishing a thriving spaceport serving a wide variety of extra-terrestrial beings, ranging from bug-eyed greys to space yetis. You need to build pods for them to sleep in, discos and arcades to entertain them, hospitals to heal them when they get sick, all while keeping the station clean and free from inconveniences such as  vermin infestations and space pirates. 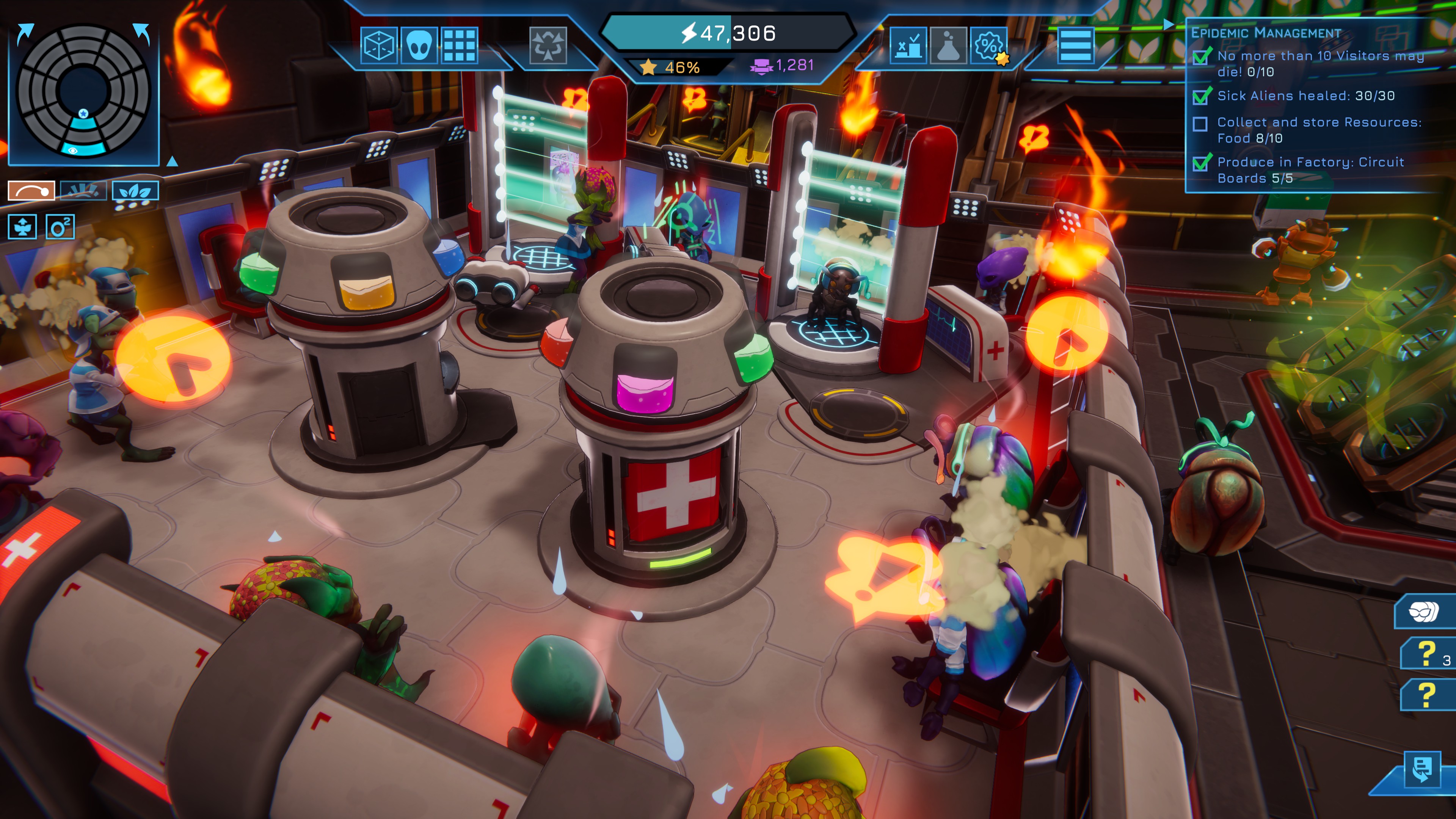 All of which sounds like great fun. But Spacebase Startopia hits problems right out the gate by saddling you with the AI companion equivalent of Malcolm Tucker. There are actually three different AI types to be continually harassed by, including an unapologetic rip-off of GlaDOS. But they all read from the same dire script. It’s clearly trying to do the whole “quirky AI” bit that’s so tired by this point it’s falling asleep at the helm. But it quickly becomes obvious that the game’s writer[s] have no comprehension about how to write jokes. So instead, the AI insults and belittles you. Constantly.

And I really do mean constantly. A few jibes toward the player would be fine if they were mixed in with other comedy. But the putdowns are incessant, as well as being mean-spirited and witless. What doesn’t help is that the opening missions of the campaign are fairly basic, with lots of waiting for objectives to resolve. They’re framed like tutorial missions, but they aren’t as they don’t actually teach you how to play the game. This is done in four separate tutorials for reasons I don’t understand. In any case, being constantly harangued when you’ve already done what the game asks of you is no fun whatsoever. 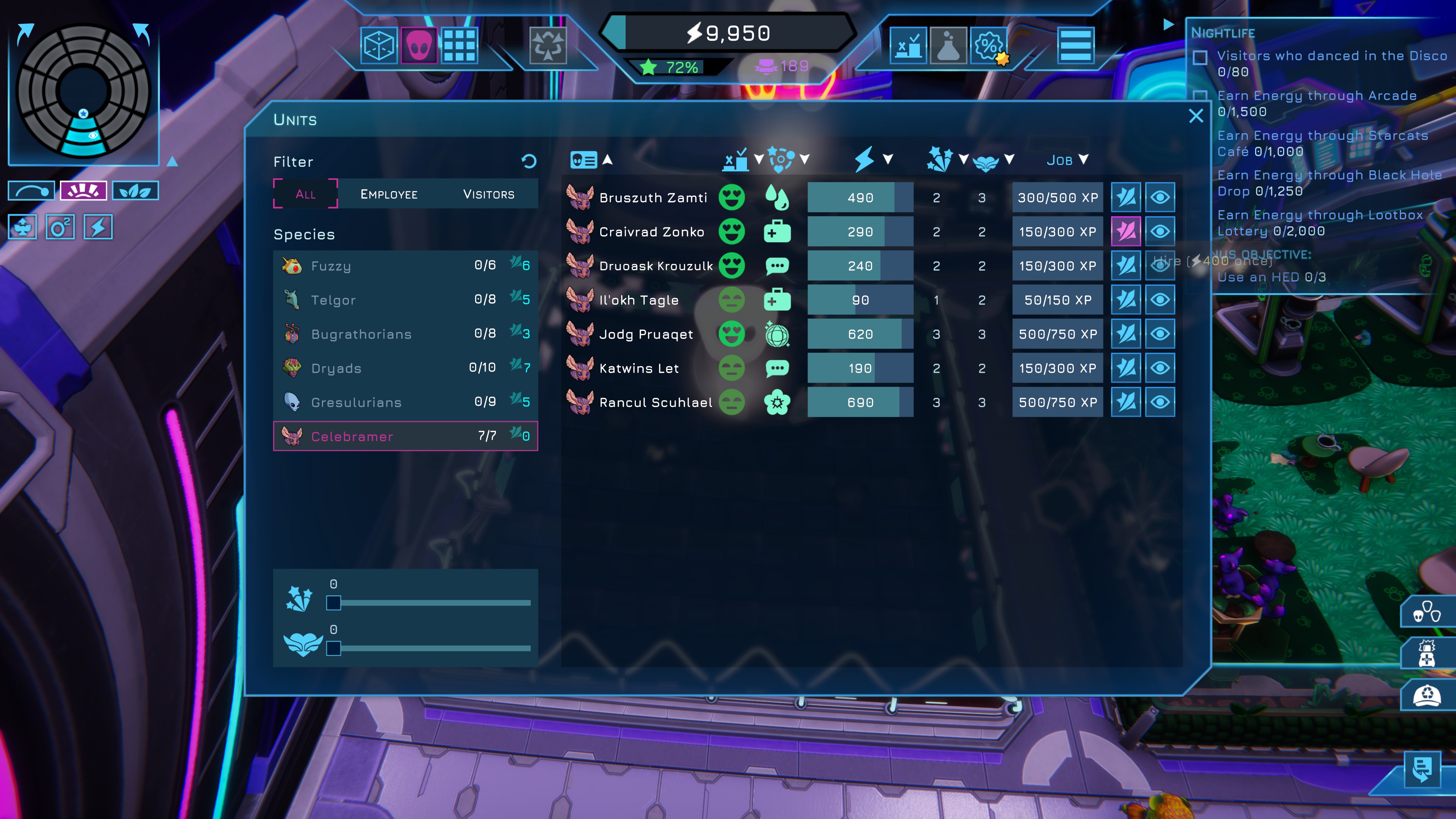 Despite the unwelcoming introduction, I persisted with Spacebase Startopia, and beneath the game’s abrasive skin is some relatively robust management muscle. Your station is split up into three levels, each of which prioritises a different area of operation. The lowest floor is a utility space, where you build basic amenities like habitation rooms, security and medical facilities, trash recyclers and so on. The first floor houses your entertainment complex, stuffed full of discos, cafes and theme park rides. Finally, the top floor is your biosphere, where plants are grown in various biomes to provide different resources.

I like the layout of Startopia’s station. The multiple floors effectively communicate the station’s size, while the visible curve of the station’s interior provides the unreal factor of sustaining life in space. I also like the detail inherent in how the aliens and your robot workers interact with objects. Particularly brilliant are the rubbish bins which, when full, actually walk to the recycling plant and vomit up the rubbish into the recycling chute. It isn’t as slick or stylistically consistent as Evil Genius 2, but it’s still not a bad effort. 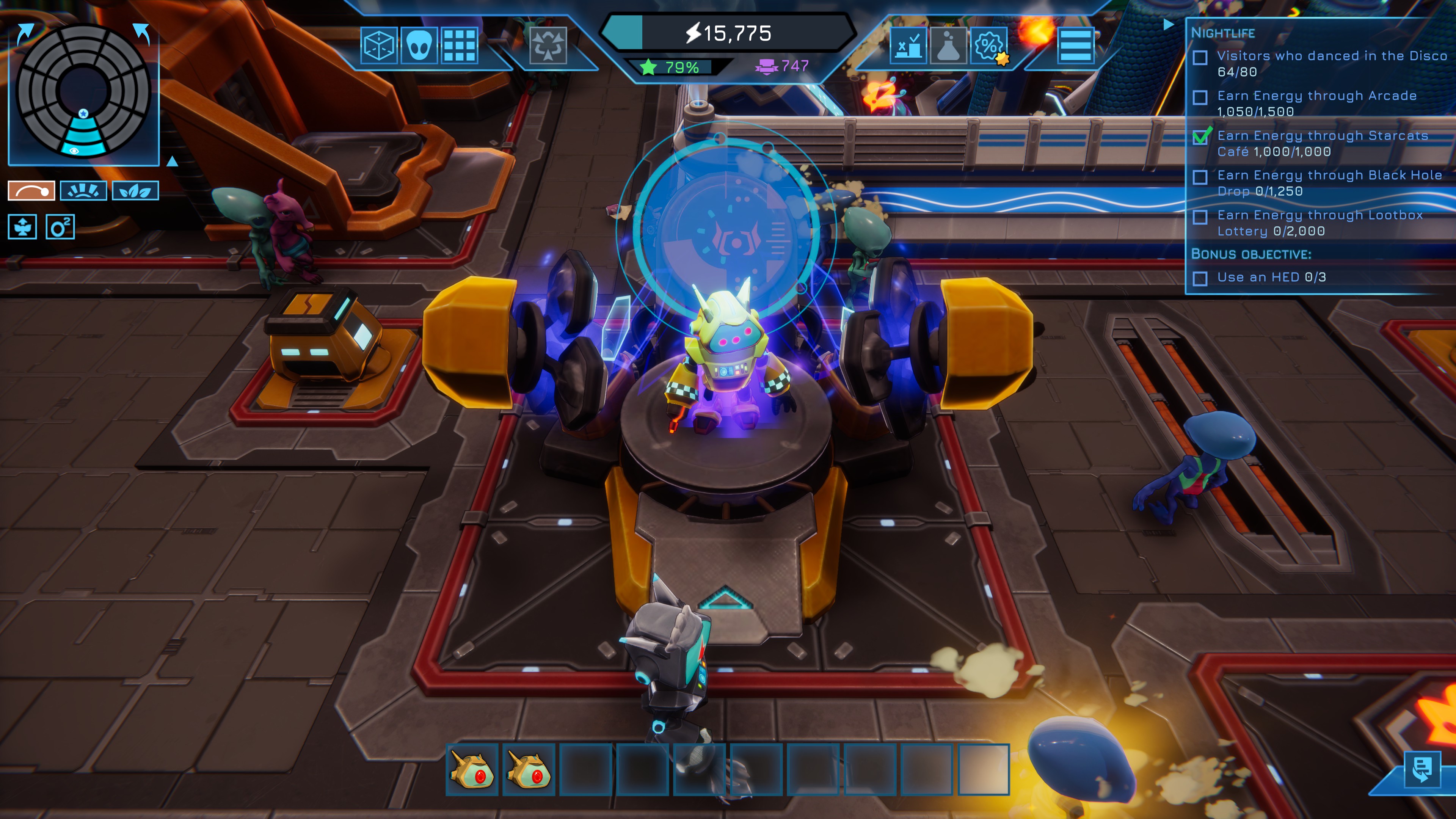 The general management is also entertaining, particularly in sandbox mode, where you’ve got the whole suite of different rooms and objects to build. Most of the fun comes in the building and expansion of your base. You start off in just a single segment of the station, and expand your construction-space by paying to unlock vast bulkhead doors, which act as excellent markers of progression. There are also genuine logistical problems you’ll need to solve. Queues will form outside amenities if the demand is maxed, forcing you to find space to build bigger habitats or medical facilities. You’ll also need to deal with disgruntled aliens walking off the jobs you hired them to do, while constantly tweaking the biomes of your biosphere to produce the resources you need for building new worker bots and so forth.

All that said, there’s nothing particularly special about Spacebase Startopia, and it makes little effort to advance the concept over the original game. For example, while visually diverse, the aliens don’t exhibit particularly unique behaviours. There was an opportunity here to add more nuanced management through catering for specific alien needs, or to referee Dungeon Keeper-style rivalries between different species. But beyond arresting the odd criminal or curing a particularly contagious sick alien, your experience with the inhabitants of your station is mostly passive. 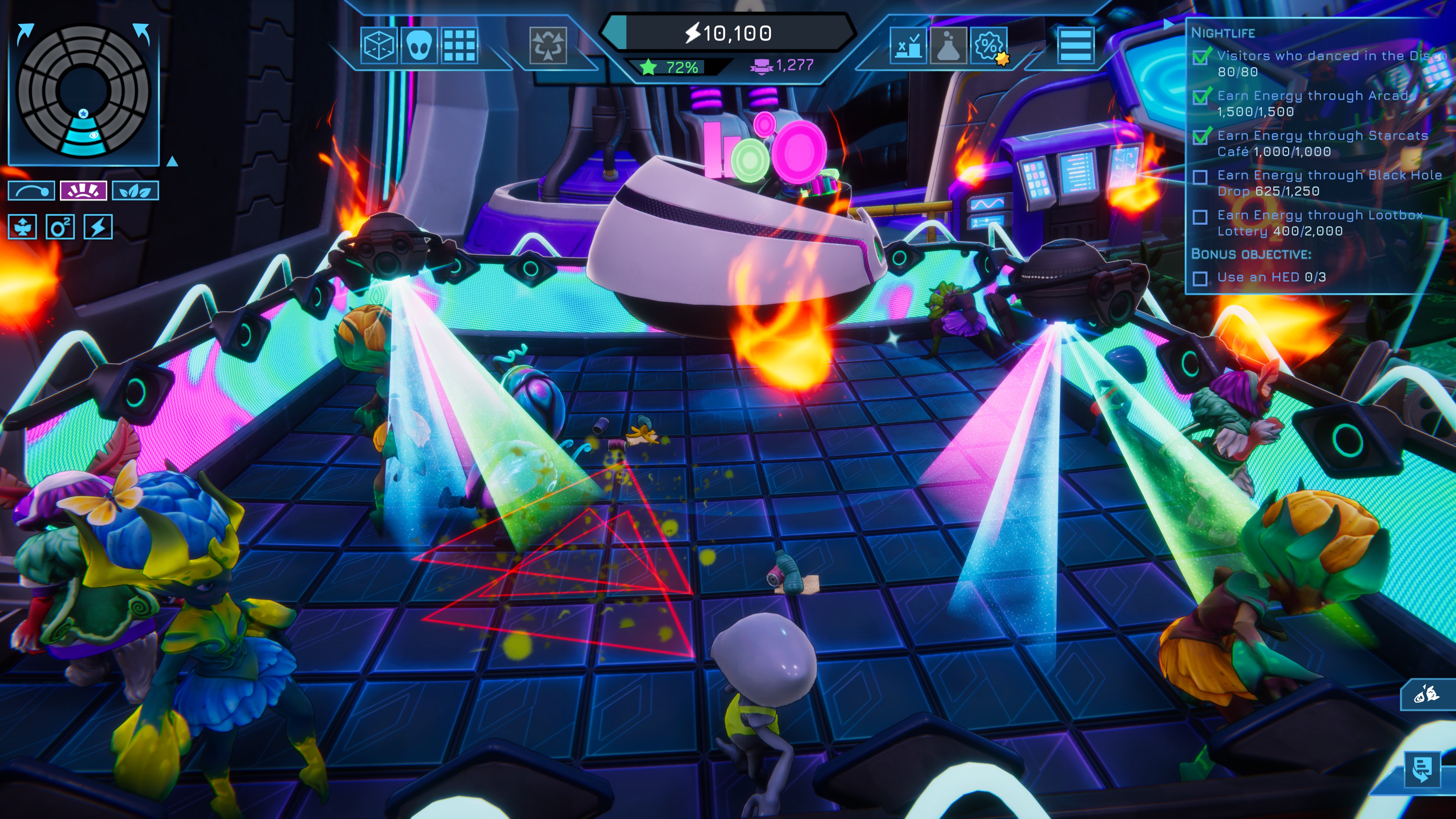 Spacebase Startopia also fails to fix some of the problems of the original, such as having to constantly pick up litter or squash vermin bugs by hand, or engage in insipid RTS-style combat with space pirates. There are also some bizarre omissions you’d expect to see in any management game, like the ability to pause or fast-forward the simulation, the latter of which would be particularly helpful during the campaign’s many quiet moments.

Mainly though, it’s the terribly-judged narration that undermines Startopia, transforming it from being a pleasant if fairly innocuous management sim into something much less enjoyable. When it’s quiet, Spacebase Startopia trundles along inoffensively enough. But the moment it opens its galactically stupid mouth, it slingshots you straight off the fun deck, and you’ll be begging to jump on the first shuttle bound for home. 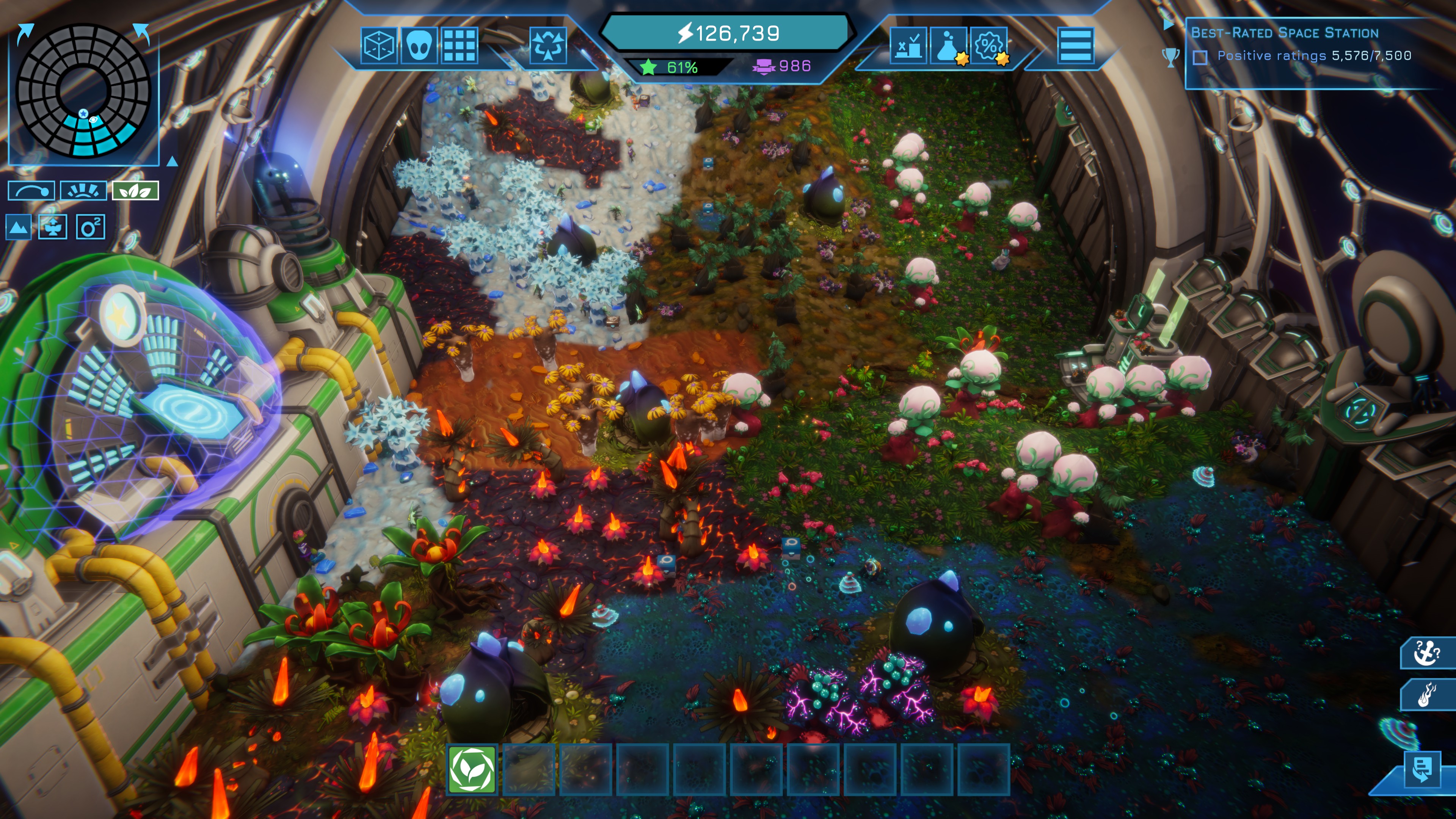