Like "amazing," "awesome" and "epic" before it, "hilarious" is a word that has become overused to the point of losing its meaning. It has been drained of its semantic potency by the hyperbolised headlines of websites like Upworthy and Buzzfeed, and our interconnected world no longer seems content with things that are merely "good" or "funny". Hilarious, as Louis CK explains it in his eponymous show, is something so funny it drives you to the point of losing your capacity for reasonable thought.

So while South Park: The Stick of Truth may not literally cause you to lose your mind through laughter, it is probably the closest any game has come to achieving a mass onset of hysterical insanity. There were times I had to pause the game to catch my breath because I was laughing so hard, and this comes from someone who has never been an avid viewer of South Park. Beyond that, though, the Stick of Truth is also a beautifully designed RPG, an unlikely but no less welcome place for developers Obsidian to finally and fully realise their potential.

The Stick of Truth casts you as the child of a family newly arrived in South Park, who joins the other South Park kids in an elaborate role-playing game that takes place across the entire town. It is centred on a battle between humans and "drow elves" over control of the Stick of Truth, which lends its wielder control over the entire Universe, apparently. But this is merely one slice of a multi-layered tale, wherein the kids' mock battles over the stick intertwine with far more sinister goings on in the town, alongside several other unexpected events which all feed into the central plot.

The humour is typically South Park in that nothing is sacred. It is frequently coarse and gross and deals with sensitive topics in a way that isn't so much close to the bone as clubbing you about the head with the entire skeleton. As you would expect it also plays satirically on a lot of gaming and fantasy conventions. Yet unlike your average episode of the show, which are often hastily assembled reactions to current events which rely on that close proximity as a basis for amusement, The Stick of Truth is a thing crafted over years rather than days. Consequently the wit has been allowed to percolate until it is wickedly sharp, dark as tar and thick as treacle.

The Stick of Truth is absolutely crammed with jokes. If Mark Kermode's Six Laughs Test is anything to go by, The Stick of Truth made me laugh four times before I'd selected my character class. And on top of the spectacularly funny and filthy jokes that run through the plot like a dodgy curry are many smaller morsels of mirth in the form of side-quests, incidental asides from companion characters and NPCs, and a faux-facebook feed where your friends from around town update you with events from their bizarre and amusing lives. Even your inventory isn't safe from the game's pervasive wit. For example, here are a few item descriptions from the "junk" you can acquire to sell for cash.

It's everywhere, ranging from totally deadpan to utterly outrageous. Even the fart jokes are funny, although to be fair, in the Stick of Truth farts are used for far more than jokes, as we shall discuss shortly. 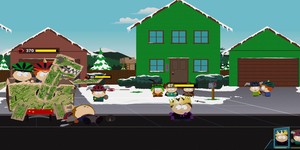 South Park: The Fractured but Whole is Ubisoft's latest RPG. Does it cut the mustard or the cheese?