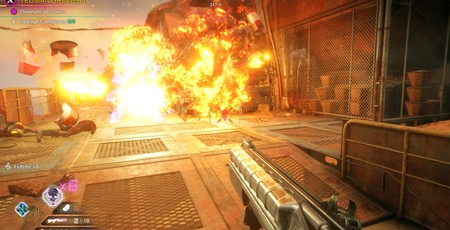 Rage 2 is a perfect example of why reviewing games can be such a headache. This game has tons of problems, from its dull and derivative world to its criminally under-utilised vehicles. The story is tedious, the UI more nested than Bass Rock, and the whole game has a slightly slapdash feel to its design. It’s a brown mess, basically. Except for the fact that it has amazing first-person shooter combat. Not just good combat, but 'as-good-if-not-better-than 2016’s Doom reboot' combat. Rage 2 has loads of weapons, brilliant abilities and power-ups, and hugely satisfying feedback. Also, I don’t know how FPS titles keep improving upon the common-or-garden shotgun, but I hope they never stop.

But does this make Rage 2 a bad open-world game with great combat or a great FPS with a bad open-world component? It’s a tough one to delineate. Combat is undoubtedly the main event here. But the open world is so big and so bland that it becomes a major distraction from said main event. I ebbed and flowed between both these notions throughout my time with the game, and your own opinion may well come down to what you place more value on. I can say this for certain: It starts really badly. Rage 2 takes places about 30 years after the first game ended (at what was clearly the halfway point of the story). You play a man named Walker, who is a member of the Rangers, a group of gruff military folk whose base is attacked by the Authority (cyborg fascists) at the game’s outset. As one of the only Rangers who survives the attack, it’s up to you to venture out into the Wasteland and seek help to defeat the Authority.

The story is more like placeholder text for a tale that Avalanche never got around to writing. The whole thing seems rushed and hastily patched together, to the point where NPCs have apparently been named using a random word generator. Normally in an FPS this lack of story would be fine, but Rage 2 doesn’t let you ignore it. In fact, at one point the game literally locks you in a room while a hologram of your dead leader squeezes out a huge, steaming lore-dump. It’s hideous, just five minutes of her gibbering banal nonsense while you bunnyhop around the room hoping desperately to glitch yourself through the wall to escape.

Having flushed the world-building toilet, Rage 2 then forces you to swim through a torrent of new mechanics, explaining a half-dozen different upgrade systems within the space of about an hour. Now, these upgrade systems are impressively diverse, as I’ll get onto shortly. But the way they’re meted out is dreadful. Finally, you’re allowed to explore the world properly, although the world of Rage 2 doesn’t exactly beg to be explored. In fact, the derivative environment design is bizarre, as Avalanche has experience in creating interesting post-apocalyptic worlds. 2015’s Mad Max succeeded in making a world built from seven types of desert visually arresting.

I think the problem is Rage 2 lacks a sense of its own personality, so just throws together some generic biomes. The central area is all beige rock-formations and shattered highways, like a sandier Fallout 3, but then there are swamplands to the west and a full-on jungle to the north. None of it is ugly, but compared to, say, Metro Exodus, the atmosphere of Rage 2 is more Mars than Jupiter. Only the last area you explore – the Dust Bowl – has an eeriness to the desolation, and that’s mostly because it’s basically the same as the starting area from Mad Max. Rage 2 is equally unsurprising when it comes to doing stuff in this world. There are bandit camps to clear, mutant nests to eliminate, pre-apocalypse Arks to find that house new weapons and abilities, and so on. But there’s far too many of each and not enough variety between them. The Dust Bowl is one of the few that has a unique activity beyond the main quest, which is partly why it sticks in the mind more.

Moreover, the Wasteland simply has no dynamism to it. One of Rage 2’s biggest letdowns is that the incredible vehicle combat Avalanche designed for Mad Max doesn’t carry over here. Aside from driving them from place to place, the only other time you use vehicles is to take down enemy convoys. This is enjoyable, but it’s also very prescribed, and elsewhere the roads are largely devoid of enemy activity. If this was the end of the story, I’d be confident in saying 'don’t play it.' But Rage 2 has to complicate things by having an Id-style FPS stapled onto its side. Unsurprisingly, Rage 2 uses the 2016 Doom reboot as its basis, to the point where your character’s armour and animations look suspiciously similar. But the developers have added to this foundation a brand new arsenal and some devastating new abilities.

Let's talk about the guns first, because wow Rage 2’s guns are special. Special credit should go to the shotgun, which will almost certainly become your default weapon the moment you acquire it. Not only is it viciously powerful, but aiming down the sight alters the fire-mode from sprayed pellets to a single slug, useful for shooting enemies at a distance and knocking them down. Other highlights include the rocket launcher, which fires both single and cluster missiles, and the Firestorm Revolver, which shoots inert flare-rounds that are manually ignited by pressing the right-mouse button, letting you combust a whole group of enemies simultaneously. By far the best weapon, however, is the Grav-dart Launcher, which works a little bit like the grappling hook from Just Cause. If you tag an enemy with the gun’s darts, then point it at a different surface, it will launch the enemy toward that surface at body-splattering speed. It’s a joy to use.

Alongside this eclectic roster, you get access to a range of powerful special abilities, from being able to charge forward and open-palm an opponent so hard they explode, to performing a devastating slam move that sends a shockwave through the ground, pulverising anyone caught in it. If you kill enough enemies, you can trigger Overdrive mode, which supercharges any weapon that you’re wielding. Oh, and you can upgrade every weapon and ability in two different ways, general power improvements and 'perks' that tweak how your arsenal performs. The combination of the creative abilities and even more creative weapons makes Rage 2’s combat supremely gratifying, and puts the spark into what would otherwise have been a pretty damp offering from Avalanche. The sheer pace and intensity of it also means you’re rarely stuck on one thing for long, and can clear a chunk of the map with relative speed compared to most open-world games.

Nonetheless, I think Rage 2 would still be better as a straightforward shooter, or at least a more condensed open world with fewer, yet more bespoke missions and activities, rather than repeating the same six or seven over and over. Modern open-world games need more than just 'here’s a bunch of stuff to do, go do it' checklist-design to stand out, and all the guns in the world can’t stop Rage 2 from feeling a little bit dated. Nonetheless, if you like a good FPS and don’t care that much about the package that comes wrapped around it, you’ll probably get something out of Rage 2.