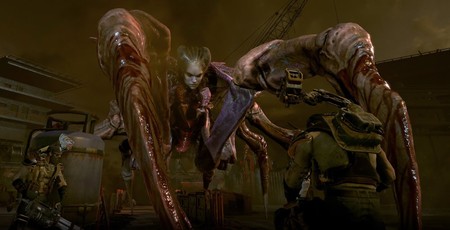 Phoenix Point is X-COM come full-circle, the logical end-point of a beautifully revived classic. Where X-COM was Firaxis’ take on Julian Gollop’s UFO: Enemy Unknown, Phoenix Point is Julian Gollop’s take on X-COM: Enemy Unknown. Snapshot Games’ iteration of the long-running concept adapts the visual and structural trappings of the 2012 hit, then adds on top a wargame’s worth of its own ideas. The result is a more nuanced and granular strategy game than X-COM, with a more organically evolving Geoscape and a greater range of tactical options in combat. Curiously, however, it’s also a less compelling experience than X-COM, one which gets bogged down in minor details and loses sight of the drama that made X-COM so thrilling.

Phoenix Point kicks off in the year 2047, where rampant global warming has released an ancient, alien virus from the Antarctic permafrost. Known as the Pandoravirus, this deadly infection causes anyone who catches to literally get into the sea. There, they undergo a terrifying metamorphosis, re-emerging as monstrous footsoldiers in the Pandoran army. At the game’s outset, the war for civilisation has already been lost, with Earth’s remaining population scattered across the globe in tiny, isolated enclaves. The war for humanity, meanwhile, is about to begin. Its last hope lies with Project Phoenix, a decommissioned global military project founded in the wake of World War II. As the sole remaining member of Project Phoenix, you’re tasked with restarting the project, and building it up so that it can withstand the

As with X-COM and UFO you approach this impossible task from two fronts. The first is the Geoscape, a holographic representation of the globe (and therefore how utterly screwed you are). You start out with a single Headquarters spawned at a random point on the map, a handful of soldiers willing to fight for your cause, and some basic world-saving amenities such as a medical facility, an armoury, a research centre, and a scanning satellite. Once you’re up and running, your base will be surrounded by tantalising question marks that you can fly out to and explore, revealing a range of different locations such as resource sites where you can trigger a scavenging mission, brief narrative interludes that flesh out the world and give you a chance at earning a reward, rival faction enclaves (we’ll get to those momentarily) and major mission objectives. Depending on what you encounter in the world, you might (absolutely will) need to engage in combat. At this point, Phoenix Point switches to an isometric tactical battle map. These are deliberately designed to resemble those of Firaxis’ X-COM, from the diorama-like 3D buildings to the blue and orange movement pools.

The nuts and bolts of both the combat and the Geoscape are quintessentially X-COM, which is to say they are quintessentially UFO. In the early game you’re massively outgunned, and will need to research new weapons to stand a chance against the growing Pandoran threat. There’s a Pandoran doom counter in the upper right screen that, if it reaches 100%, will end your game. You’ll need to track down and destroy enemy bases to interrupt its count, and occasionally defend your own base from Pandoran assault. Like I said, so far, so X-COM. It’s in the details where Phoenix Point makes its strategic stand against Firaxis’ work. The biggest difference is that you’re not alone in the fight against the Pandorans. Three other factions vie for supremacy amidst the ashes. The Disciples of Anu are a zealous religious sect that use the Pandoran virus to enhance their own bodies. New Jericho is your standard military dictatorship, banking its success on powerful weapons and thick armour. Synedrion is a pseudo-communist utopian society with advanced scientific knowledge, which it reluctantly puts into exotic weapons and equipment.

These factions exist alongside in a complex political hierarchy that you can try to manipulate to your own advantage. Helping factions by trading with them, defending their havens from attack, and supporting them in certain narrative decisions will improve your reputation with them, and over time, provide access to their technologies. On the flipside, you can also attack their havens, sabotage their infrastructure, and steal their vehicles for your own gain. How you approach this is entirely up to you, and that ability to weave your own political web adds a lot of extra nuance to Phoenix Point’s strategy. Combat has a similar level of granularity baked into it. You get four action points rather than two, and you can allocate these however you like. If you can remain still during a turn, you’ll be able to fire multiple shots at an opponent. Or you could spend all your points getting your sniper to the highest point on the map. In addition to those, each character has a bank of “Willpower” points that are used to trigger special abilities. These can give you big advantages in combat, but draining willpower also makes them susceptible to panicking.

On top of that. Phoenix Point also has realistic ballistics and destructibility. Cover doesn’t act as a percentage barrier, if enemies attack from the right angle they can still hit your soldiers in heavy cover. You can even aim your soldier’s guns at specific enemy body parts, shooting enemies in the legs to slow their movement, or in the arms in the hope they might have to drop their weapons. One of my favourite elements of Phoenix Point is class mixing, which lets you adopt a second class for each soldier and take advantage of their abilities. Combining the Sniper and Assault classes for example, will let your sniper sprint huge distances across the map. Alternatively, you could give your Heavy some Sniper abilities, letting them fire devastatingly powerful weapons with supreme accuracy.

There are loads of little details like this, although not all of them improve the game. Having to manage the specific inventories of individual soldiers seems like a good idea at first, but quickly becomes annoying, as is the fact that you must manually top up their magazines after they’ve been in a fight. The same goes for the “Scavenger Hunt” resource collection missions. Again, fun at first, but as you hit your twentieth scavenger hunt, you start to wonder whether Phoenix Point could have introduced upgrades to automate some of this busywork. When Phoenix Point expands into the mid-game, where you’ve got to monitor half a world’s worth of activity, you end up getting bogged down in micromanagement, and the game slows to a crawl. I’ve no doubt that some people will love this obsessive intricacy, and if you’re one of those, get yourself a copy of Phoenix Point right now. For me though, it just starts to drag too much, and comes at the cost of one of my favourite elements of X-COM – drama.

X-COM was unique in how it transformed turn-based tactics into something that wasn’t just cerebrally engaging, but as thrilling as an action-movie. The fanfare with which it introduces enemies, the way the camera positioned itself to give your movements and actions a cinematic twist. The way it presented its story and escalating world state, making you feel the significance of every decisions, every victory and defeat. Phoenix Point doesn’t have this. The battles have a certain amount of spectacle baked into them, but beyond that they have little sense of occasion. The soundtrack has no dramatic weight to it. The main plot is interesting, and I enjoyed unveiling nuggets of information about the world as I explored, but there’s not much verve to the telling of it, with most of the narrative conveyed through static text-screens.

Don’t get me wrong, Phoenix Point a solid strategy game. But it doesn’t have much personality beyond the stuff it borrowed from X-COM in the first place. As for what it does introduce, some of it works really well, but other aspects of it actually make the game less enjoyable. If you’re a big X-COM fan and are hankering for more, Phoenix Point will certainly scratch that. Just don’t expect it to engage you on an emotional level as well as an intellectual one.