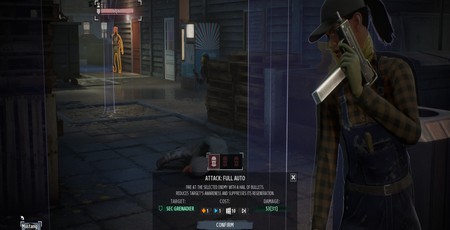 It’s been a long and difficult road, but I finally think I’ve got the hang of Phantom Doctrine. I’m assaulting a Beholder spy cell in Denver, meaning I must infiltrate and neutralise all the enemies inside. Ideally I’ll do this without raising the alarm, because neutralising a cell in open combat is hard. Everything in Phantom Doctrine is hard. But these missions are particularly challenging. Fortunately, it seems the God of Spies is smiling upon me for once. I’ve got six healthy agents deployed, two of whom have wormed their way into the compound in disguise. I’ve got support observation units tracking enemy movements from the north and south. Best of all, two of my agents have deployed with two silenced weapons, so I can eliminate enemies from distance without raising the alarm.

My spies move meticulously. First the disguised agents use their concealment to disable the compound’s security cameras. Then the rest of my team sweeps in, knocking out or silently shooting each enemy they come across, collecting any interesting documents or useful equipment as they go. There’s one nasty little nest of policemen patrolling around the outbuildings, but navigating that will be a good test for my newly-recruited Agent Roxie. I’m about halfway toward completing the objective when the alarm is raised. The only possible explanation is that Agent Roxie has been spotted, so I swing the camera over to the outbuildings, but Roxie is nowhere to be seen.

This is because Agent Roxie has not been spotted.

This is because Agent Roxie has turned.

I don’t know whether he has betrayed me, was a sleeper agent who has just activated, or was simply Beholder all along. All I know is now I’m down to five men, with six enemies still in the compound, and reinforcements arriving the next turn. This was the most prepared I’ve ever been for a mission. Now it’ll be a victory if all my agents get out alive. Such is the nature of Phantom Doctrine, a strategy game that combines the uncompromising turn-based combat of XCOM with the scheming and intrigue of Cold War espionage. It’s phenomenally complicated, often cumbersome, and occasionally downright wonky. But it’s also gripping and when everything clicks, hugely rewarding.

Anyone who has played XCOM will be instantly familiar with the basics of Phantom Doctrine. The game is split evenly between time spent in your base and on deployment. During the former, you recruit agents, research new technologies, amass income, and watch a map of the globe for events to respond to. During the latter, you move your agents around an isometric 3D map, completing objectives and fighting enemies either through stealth or turn-based combat. Once you’ve delved beneath this XCOM-like skin, however, you’ll soon discover that Phantom Doctrine differs from Firaxis’ strategy masterpiece in many ways, largely dictated by the game’s wonderful theme. Phantom Doctrine is set in 1983. Players assume the role of leader of the Cabal, an independent espionage organisation investigating the machinations of Beholder, a mysterious terrorist syndicate with tendrils reaching across the globe.

The plot is a fittingly labyrinthine game of cat and mouse. Your goal is to track down information on Beholder and try to pin down activities, while Beholder is trying to do the same to you. Standing between both groups is a web of conspiracy that involves the world’s key intelligence institutions and all manner of shady criminal groups. It’s a well-written and engaging spy thriller spoiled slightly by dodgy voice acting. Nonetheless, it was enough to keep me engaged while spinning Phantom Doctrine’s many tactical plates. The story is propelled forward by certain key missions, most of which are happy to let you wait until you are ready to tackle them. You rarely are truly ready, however, as there are a whole bunch of other goings-on that often require urgent attention. Beholder is always hunting for intel on the location on your base, and if they find any, it increases the “Danger” track in the top-right corner of the screen. If this goes red, it means they’re close to finding you, and you need to either move your base location to a new city (costly) or prepare for an enemy Assault (potentially game-ending).

Many missions are focussed on interrupting Beholder’s own intel searches by eliminating key agents. Meanwhile, informants constantly pop up across the globe, providing you with information and occasionally equipment to help move along your objectives. But Beholder will often try to assassinate them, so you’ll need to deploy agents to rescue the informant and bring him directly into your operations. Any activity that appears on the board requires agents deployed to investigate it. You’ll rarely have enough agents to cover everything, as there are a several other jobs in the base that require attention. These include forging cash to increase your income, training to improve their abilities, analysing collected documents. Moreover, if agents are wounded, they’ll need time to recover in hospital, temporarily taking them out of the game.

At the strategic level, Phantom Doctrine nails its theme beautifully. As your agents go on operations, they acquire “Heat”, which can ultimately compromise their identity, leaving them exposed to capture on missions. But you can spend a little money to give them a new identity. This loops in the game’s character creator where you can provide the agent with a new name, nationality and appearance (their codename always remains the same, however, which is a little odd). There’s also a neat minigame where you string different documents together on a corkboard to tie an agent codename to a specific person, or identify a secret location. When it comes to the tactical missions, though, Phantom Doctrine is less successful, at least in the early game. There are two phases to a mission, Infiltration, where your characters can sneak around a level undetected, and combat, which is an XCOM-style game of chess that requires trying to do as much damage to enemies as possible while keeping your own agents protected.  For a large chunk of the game, however, Infiltration is very restrictive, while combat is ludicrously weighed in favour of the enemy.

To go into more detail, Phantom Doctrine’s combat has some key differences to that of XCOM. Firstly, there’s no percentage chance on whether shots hit or miss. If you’re within a weapon’s range, you’ll always hit your target, and the same goes for your opponents. Instead, the success of a shot is dependent upon the target’s “Awareness”, which acts kind of like a forcefield, alongside the strength of their cover. If they’re in heavy cover with high Awareness, your shot will do very little damage, or they might dodge it entirely. If both traits are low, then your attack will do far more damage, possibly killing them outright. The idea behind this is to make Phantom Doctrine less reliant on luck, specifically avoiding those freak events in XCOM where a character will miss three shots in a row that had a 98% likelihood of success. Unfortunately, a new problem arises in its place, namely that the AI is incredibly good at exploiting this no-miss mechanic. I’ve had enemies incapacitate my soldiers using a pistol from across half the map, or fire through the multiple windows in a trajectory that would be impossible for any human being. It’s just inhumanly good at finding angles where your characters are unprotected.

The combat is made even harder by the fact that, once you’re engaged, enemies keep on coming. The fight continually escalates, with your opponent receiving a constant influx of reinforcements and even special abilities like airstrikes, which seems a slightly OTT way of neutralising a handful of spies. Eventually, I found ways to deal with both of these quirks, such as relying on Overwatch to discourage enemy assaults, and making use of Phantom Doctrines new “Breach” mechanic, which lets multiple agents assault a single location at once, which is both a very cool and pretty powerful way of dealing with several enemies in one location.

Really though, Phantom Doctrine wants you to avoid combat wherever possible. And I’m totally fine with that. I really like the idea that in open combat you’re fighting a losing battle, because that’s what it would be like for a small group of spies deep in enemy territory. But the game doesn’t make this fact clear enough early on, and it takes a long time for Infiltration to evolve beyond using a handful of agents to laboriously knock out enemies with manual takedowns. It needs a few more gadgets like tranquiliser darts, or some kind of mid-level AI where enemies are suspicious but not alerted, to beef-up Infiltration and make stealth more fun. It’s frustrating because. once Phantom Doctrine begins to open up, it becomes incredibly engrossing. Using disguised agents to infiltrate enemy compounds is hugely satisfying, as is using silenced weapons to quietly dispatch guards without raising the alarm. And I haven’t even mentioned the MK Ultra facility, which lets you interrogate and brainwash enemy agents so that rather than executing them, you can mentally rewire them to serve your cause in all manner of ways. These include revealing enemy cells, or turning on their allies during missions, just as that rat Agent Roxie did to me (not that I’m holding a grudge against a randomly generated video-game character. What kind of mad idiot would do tha- I HATE HIM I HATE HIM SO MUCH.)

There were times when Phantom Doctrine tested my patience. Many missions go on too long, managing your finances can be a massive headache, and the enemy AI often feels more inhumanly powerful than XCOM’s own alien threat. But no matter what ludicrous situation Phantom Doctrine threw at me, I always wanted to go back, and once I’d got my head around the game’s idiosyncrasies, I found myself succeeding far more often, even managing to complete missions without ever raising the alarm.

This isn’t to excuse Phantom Doctrine’s flaws. It plays too heavily on aesthetic similarities to XCOM when in fact it plays in a very different style. It does a poor job of explaining its many little differences, and Infiltration needs to be more fun much quicker than it is. But even in its weakest moments, Phantom Doctrines still had me utterly hooked, and that’s when you know that a game is doing something right.