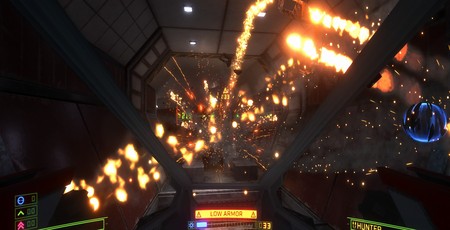 One of the best feelings in this job is when a game comes along that you didn’t even know you wanted and absolutely knocks you for six. On an entirely unrelated note, let me introduce you to Overload, the spiritual successor to Parallax Games’ Descent, directed by the series creators. I’ve never played the original Descent games. They arrived a few years before I got into PC gaming proper, and the idea of flying around a big maze in a spaceship shooting robots didn’t appeal to 12-year-old me for reasons 30-year-old me still doesn’t fully understand. Because of this, I can’t really tell you how good a spiritual successor Overload is. What I can tell you is that, considered entirely on its own merits, Overload is absolutely flippin’ smashing.

The setup puts us in the year 2118 AD. Humanity has colonised the solar system but is yet to venture beyond it. The edge of Earth’s reach lies around Saturn, whose 52 moons (a fact I only learned after playing Overload) serve as colonies for the Cronus Frontier, a research and manufacturing operation assisted heavily by robotic drones provided by Cronus’ parent company, Juno Offworld Automation. Not long before the game’s commencement, the entire frontier goes dark, and you, a special-operative stationed on the spaceship Iberia, are awakened from Cryosleep in order to investigate what has occurred. As it transpires, all drones throughout the system have glitched and gone a bit, well, murderous, and the only way to stop them is to hop from moon to moon and overload the reactor of each station, thus triggering a machine-crippling EMP pulse.

What made Descent such a big deal in 1994 was how it liberated the shooter from the X/Y axes. At a time when DOOM didn’t even feature jumping, Descent famously offered six-degrees of freedom, letting you ascend, descend, turn, strafe, and roll, which must have felt unbelievably liberating at the time Today, none of this is particularly special. Where Overload’s appeal lies for me is learning how to pilot your ship to master the wonderfully bamboozling level design of each of its stations. Each mission blends the sharp angles and sleek lines of each station’s superstructure with the more natural bumps and contours of the wider moon’s cave systems. You’ll navigate through twisting ventilation ducts, lofty chrome halls, vast reactor rooms and pitch-black caverns, searching for security keys to unlock new areas, cryo-static crew-members to rescue, and mechanical opponents to blow to smithereens.

Overload’s approach to level design is distinctly old-school, more interested in providing a spatial challenge for the player than creating a place that is necessarily believable. But there’s more logic to each map than is apparent from the inside. Open up the game’s gorgeous 3D maps, which automatically fill-in as you traverse each level, and you’ll see the clear outline of a refinery or a drone-assembly factory. Although it’s not necessarily the point of the game, it’s satisfying to see all this seemingly random assemblage of corridors and rooms come together into something that makes sense. Exploration is only half the story. Each of these hive-like networks is filled with all manner of hostile robotic enemies, from basic Golem drones that fire lasers at you from a distance to more challenging opponents like the Scorpion, who charges you with outstretched metal claws. A particularly nasty little blighter is the Harpy drone. Although fairly weak on its own, it's an absolute nightmare to fight in swarms, which is of course how it nearly always attacks you.

In Overload you’re always outnumbered but certainly not outgunned, as the game offers the most satisfying arsenal of weapons since Id’s reboot of Doom. Your little ship is armed with two broad categories of weapons – primary turrets that fire either lasers or solid projectiles, and secondary explosives such as missile or mines. The former act as your basic damage dealer, although they still come in some inventive forms. Highlights include the deceptively powerful Reflex, a neon-green pulse weapon which bounces off walls and surfaces, and the Flak, twin cannons attached to the sides of your ship that carve up enemy drones in a hail of gunfire. My favourite weapon, however, is the Driller, a slow-firing, underslung gun that makes up for its relative lack of spectacle by doing an astonishing amount of damage.

Your primary weapons will get you through most small-scale fights. Overload doesn’t really do small-scale beyond the first few levels, however, so it won’t be long before you need to bring out your secondary arsenal, which ranges from straightforward dumbfire missiles such as the Falcon to homing swarm-explosives and the almighty Devastator, a hulking rocket that unleashes cluster missiles when it detonates. The result is some of the most colourful and thrilling vehicular combat this side of Elite Dangerous. You’re constantly swooping, ducking, and rolling between clusters of enemies, always trying to keep them in your sights without backing yourself into one of the many corners in Overload’s cramped and twisting corridors. Sometimes the only solution is to fire everything, transforming the screen into a kaleidoscope of colours and particles as a half-dozen drones are shattered into scrap metal within seconds.

Overload’s production values are superb. Special mention goes to the music, which blends brooding, John Carpenter-like synth with screaming electric guitar riffs typical of nineties arcade games. The writing, too, deserves a fair amount of credit. The story is written by Jason Scott, who also co-wrote Freespace 2, and although it’s only of peripheral significance, the gradual reveal of why the drones of the Cronus Frontier have gone rogue was delivered with sufficient panache to keep me interested in it even as half the solar system seemed to be exploding around me. The locations evolve slightly over the games 15 levels, but for the most part each mission looks very similar to the previous one. Most levels also play out in precisely the same way: locate the keys, reach the reactor, destroy the reactor, escape. You’ll occasionally encounter unique objectives, such as a boss to defeat. But for the most part Overload relies on a drip-feed of new weapons and enemies to keep the player interested. This works, but inevitably you begin to feel the repeat of the format, which is unfortunate.

Another slight issue is apparent with the difficulty balancing. I played the first half of the game on Hotshot difficulty, which is Overload’s equivalent of normal. Around the fourth of fifth level, however, I found that the game became too challenging for me and had to reduce it to Rookie level in order to make meaningful progress. Given that there are two difficulty levels above Hotshot, I felt that the balance was slightly off for what Overload considers to be normal. One last point worth noting is that Overload comes equipped with a fully functioning VR mode, both for Oculus Rift and HTC Vive. And it’s quite something, although you’ll need a strong stomach and some wicked piloting skills to navigate Overload’s twisty-turny levels in stereoscopic 3D. Nonetheless, it’s a neat addition that does work quite well with the game and is certainly worth trying if you happen to own a headset already.

I’ve little doubt that Overload will play well with fans of Descent. But more importantly, it’s a fantastic game to play today, to the point where I’m wondering what I missed 20 years ago. It’s probably the best shooter to come out this year so far, and I’m going to be thinking about its lovely little 3D space mazes for some time to come.

Classic PC title Descent has taken to Kickstarter to try and raise funds for a reboot.