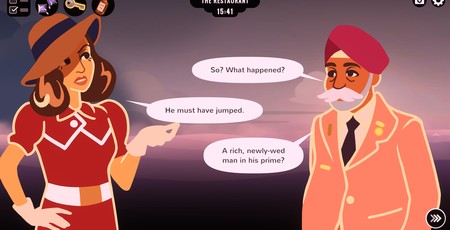 Overboard is an ingenious reverse-detective game in which you must get away with murder. It’s a delightfully twisted premise from narrative adventure maestros Inkle, whose previous efforts include 80 Days and Heavens Vault. But it’s the frequently hilarious and astonishingly open-ended execution that catapults Overboard into the cream of virtual detective fiction. 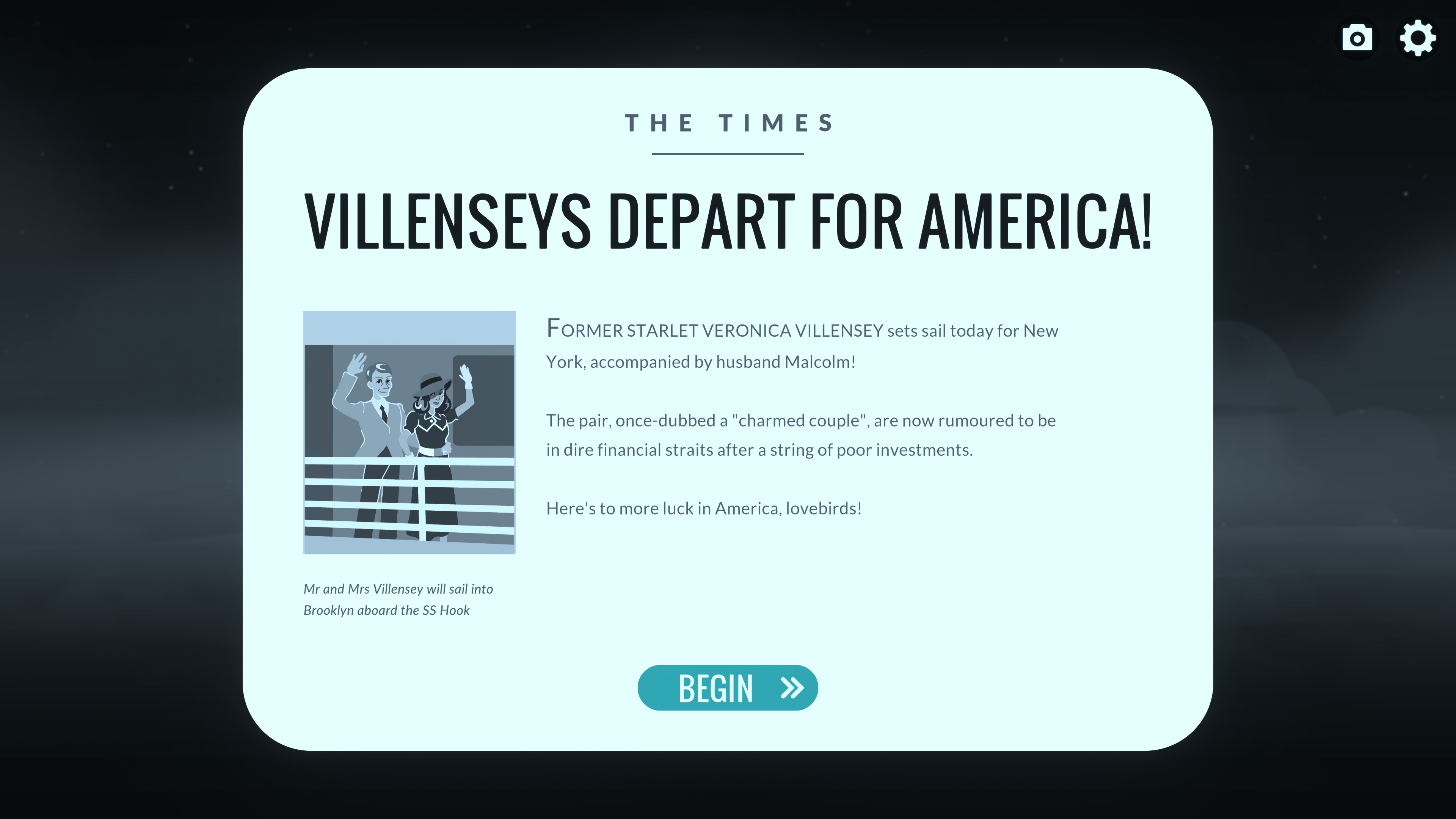 You play Veronica Villensey, a 1930s former starlet who is a passenger on the steamship SS Hook, crossing from London to New York. The night before the boat arrives at its destination, Veronica pushes her husband Malcolm over the railing of the upper deck, plunging him into the Atlantic. Dousing her guilt with a sleeping pill, Veronica awakens the next morning with just eight hours until they reach port. Unfortunately for Veronica, the ship’s passengers and crew are all ripped straight from the pages of an Agatha Christie novel. There are multiple potential witnesses, nosy old ladies, and a retired British-Indian Army Major who fancies himself a detective. Getting away with murder, therefore, will require some deft social manoeuvring and some sleuthing of your own.

Functionally, Overboard is a narrative adventure where most of interaction occurs through dialogue. But Overboard has a couple of features that immediately set it apart from most of its peers. The first is the concept itself, which is not only a great hook to get you into the game, but a fantastic framing device for approaching conversations. From the moment the ship’s porter knocks on your door to warn you breakfast service is ending, you’re thinking about how best to respond to avoid implicating yourself. Do you feign ignorance about your husband’s whereabouts, pretend everything’s normal, or try to get ahead of any investigation by raising the alarm yourself? 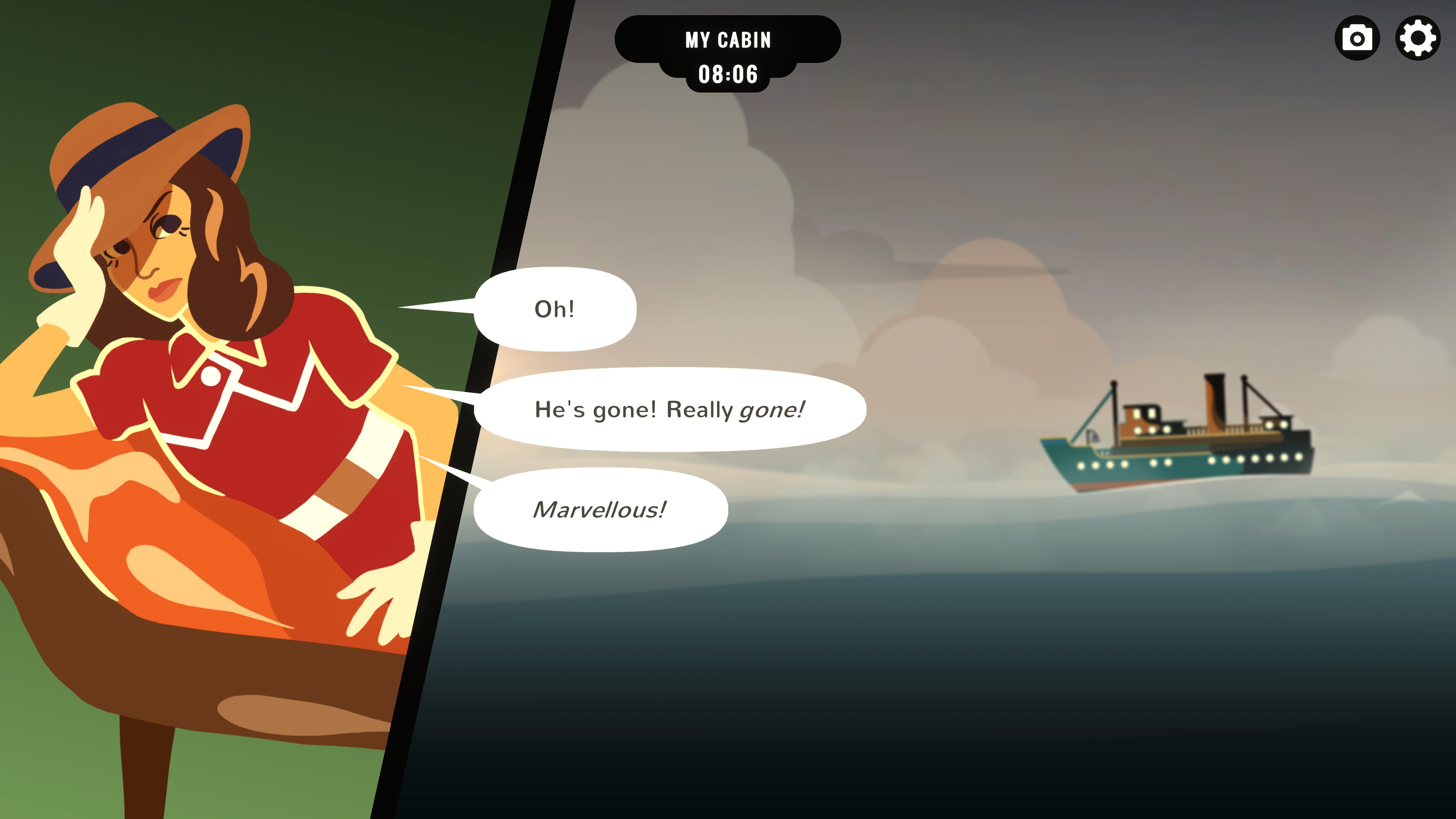 You’re analysing every potential response for ways it could push the spotlight away from you, or how it could bite you in the backside later on, and this context makes Overboard’s choices delightful to grapple with. The other notable feature is how Overboard uses time and the ship’s layout as branches in the narrative. As the day progresses, characters move to different locations, while the available conversations and actions you can take change. The ship also takes time to navigate, and you can’t be everywhere at once, so you must pick and choose where to go, who to speak to, which snake in your viper’s nest of problems to strangle.

A single run of Overboard doesn’t take long, twenty minutes at most. But your chances of getting away with murder on your first attempt are slim. It took me two attempts to evade the clutches of the law by the slimmest of margins (everybody knew I’d done it, but they didn’t have the evidence to prove it). Crucially though, getting away with murder is not the end of the game. There are far more challenging objectives that you need to achieve to truly “complete” the experience, objectives that reveal more about the story and the true motivations behind Veronica’s dastardly deeds. 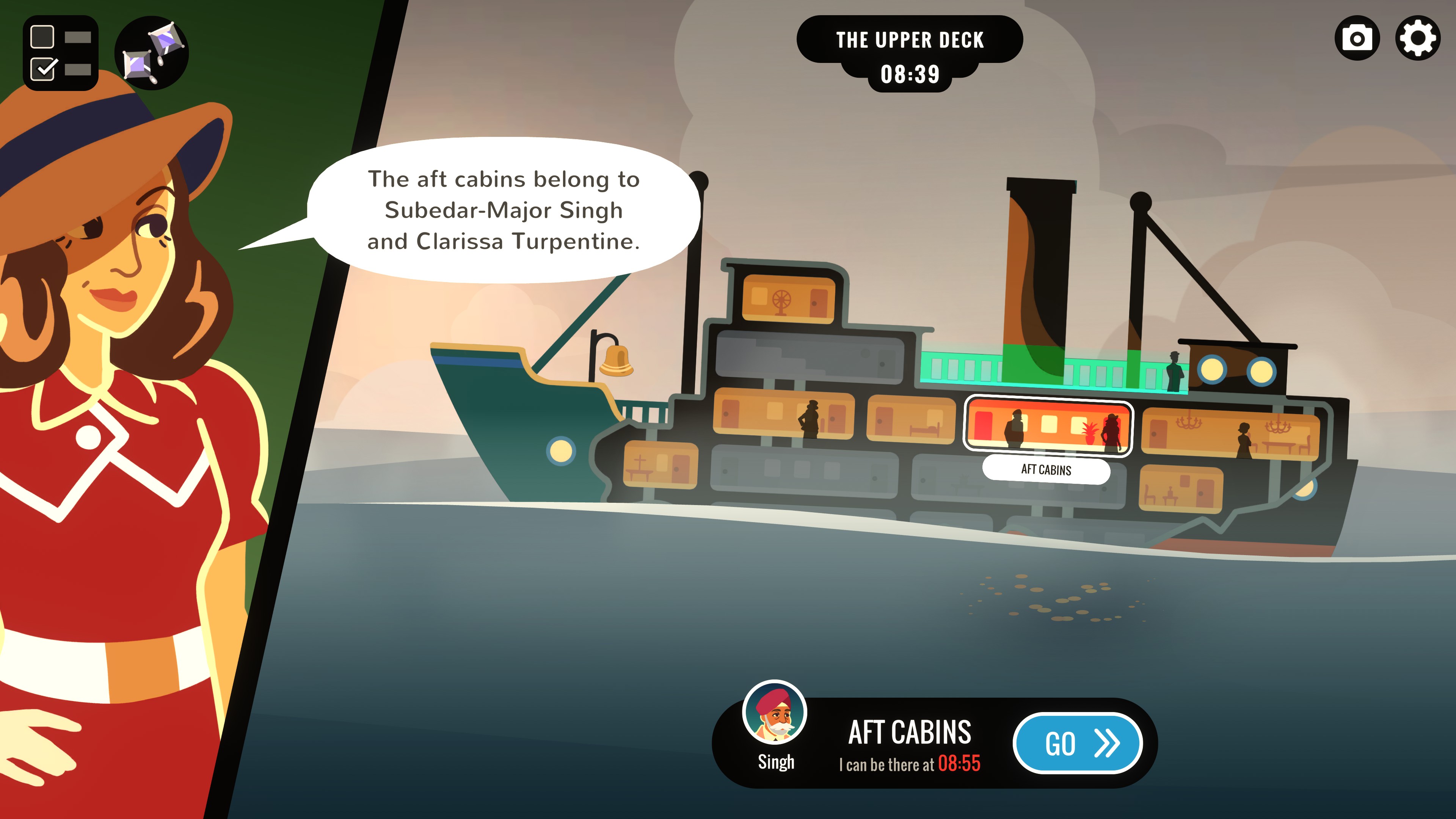 Even if you manage those, you won’t have truly “finished” Overboard, due to the sheer range of ways you can approach its topsy-turvy whodunit. One way you can try to evade justice is by committing more murders, eliminating witnesses in a variety of darkly colourful ways. There’s even an achievement for killing everyone else on the ship, the perfect example of just how flexible Overboard’s story is.

Beyond Overboard’s clever mechanical structure, it’s also a brilliantly written game. Veronica is the perfect anti-hero, sly and charming and a delight to inhabit. The secondary characters are equally well drawn, such as the scheming gossip “Lady H” and the infuriatingly tearful Clarissa Turpentine. Overboard excels at imbuing Veronica’s own motivations within you, giving you seemingly legitimate reasons for wanting to manipulate and murder the ship’s other passengers. 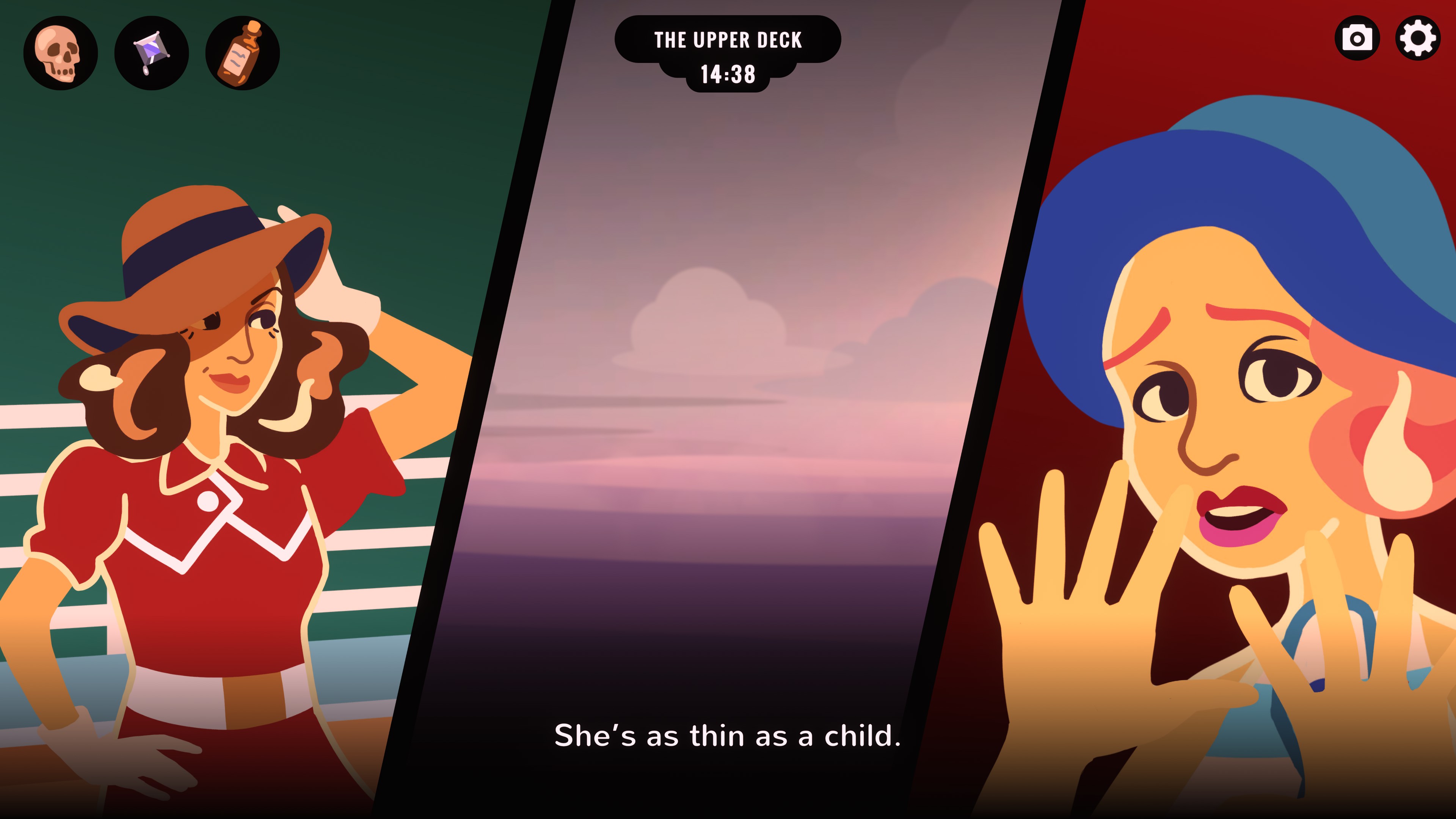 Overboard is a neat and tidy package, with no major flaws to speak of. There are a few nits I could pick, however. The emphasis on repetition means the dialogue takes a back seat after a few play-throughs, and you increasingly treat the game purely as a nut to be cracked rather than an experience to be enjoyed. In addition, even with its replayability taken into account, Overboard is still a brief affair. It is priced accordingly, however, so it would be churlish to complain about this too much.

As I said, nitpicking, Overboard got its claws into me more effectively than the most conniving gold-digger, and I haven’t stopped thinking about it since I started playing. One night I was washing up and had a flash of inspiration about how to solve a particular problem, and I rushed upstairs to test my theory with another quick playthrough. A game making you drop reality like that is always a sign of excellence, and I’d happily dip back into Overboard’s treacherous waters any time.