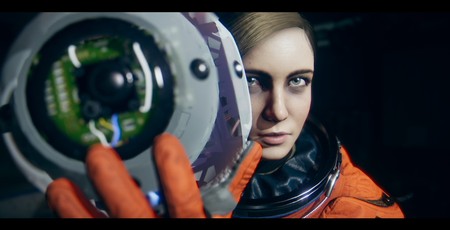 The Space Station Observation is in orbit around the planet Saturn. It shouldn’t be. Something has gone terribly wrong aboard the state-of-the-art international research vessel, transporting it halfway across the solar system in an instant. To make matters worse, the station is damaged, and nearly all the crew are missing. The only known survivor is Dr Emma Fisher, and she needs to find out what in Uranus is going on. It’s a premise that’s been seen before in all kinds of fiction, including games. But Observation puts a twist on this familiar sci-fi tale. You don’t play as the survivor. You play as the station.

Specifically, you’re SAM, Observation’s onboard Artificial Intelligence. You’re in charge of the station’s general operation, maintaining systems, watching over the crew, and generally ensuring it doesn’t fall out of the sky like a big fiery doughnut. At least, that’s the case in normal circumstances. When Observation improbably pops into Saturnian orbit, your system is almost entirely wiped, leaving you as vulnerable and confused about the situation as your one human companion. So begins a playable sci-fi thriller that is as eerie and atmospheric as it is stunningly realised – a HAL 9000 simulator that sells its premise superbly. For all its quality, however, I wish Observation spent more time exploring its concept.

This is because, from a systems and puzzling perspective, Observation is one of the most interesting games I’ve played in some time. It tries very hard to simulate inhabiting an advanced computer system. You interact with the game world largely through the station’s camera feeds, panning and switching between cameras to highlight objects in the world - laptops, coolant networks, communications arrays, and so forth. You can “pair” with these devices by inputting a code, at which point you’ll be able to access them. Each of these systems has a different UI that you’ll need to interpret – one of game’s main approaches to puzzle design. Alongside this is SAMOS, a series of menus you can instantly access by pressing spacebar. SAMOS lets you skip around the different station modules, access files in your memory core, monitor crew activity, and so forth. Again, these all work in slightly different ways, and you need to decipher how to use these systems to solve certain puzzles. For example, you might need to combine multiple corrupted memory fragments to create a complete file that you can read.

I should point out here that the Observation isn’t a game built from a series of menus. The station is fully realised in 3D, and in astonishing detail at that. NoCode has taken inspiration from the structure of modern space stations, particularly the ISS. The cylindrical station modules are crammed with objects arranged in ways that only make sense if you’ve been living in Zero-G for a while. There are periods when you can explore the space-station both inside and out using a mobile “sphere” propelled by gas-jets. Observations’s production values are first-rate across the board. The writing, voice acting, and particularly animation is all excellent. The way Fisher moves through the station, grabbing handholds and pulling herself along, is uncannily good. I also love the use of film-grain and artefacts – post-process effects which are usually out of place in games that deploy them – to create the sense of you always looking through a camera lens. It compounds the chilling detachment you have from events in your role as AI. This doesn’t detract from the game’s horror, by the way. If anything, it enhances it.

Speaking of which, I don’t want to say too much about the story, but it takes notes from a whole range of different sci-fi classics. Alien and 2001 are probably the most obvious inspirations (NoCode is formed from Alien: Isolation devs), but Gravity Tarkovsky’s Solaris are important touchstones, too. I particularly like the way Observation handles the AI theme, the way it gradually builds a logic around how events transpire, while adding a personal element in your connection with Dr Fisher, a connection that becomes ever tighter as the game progresses. It’s by no means a straightforward “Rogue AI” story, and that is to its credit. If you’re after a taut, compellingly-told sci-fi thriller, Observation delivers it, and I’ll state right now the game comes with a recommended seal plastered all over it like weird alien goo. However, Observation could have made more out of its “Be the AI” premise. Observation clearly wants to get on with its story, and while it’s undoubtedly a good story, the world and puzzle systems NoCode has created deserved more time for the player to steep in them.

Most of the systems available to you are only ever used once or twice, before being consigned to the great Recycle Bin in the sky. As such, you rarely get a chance to enjoy the central hook before the game propels you onto the next story beat.  My favourite part of the game occurs around the middle, where the story stops to take a breather and asks you to fix some stuff on the station. Flitting between the camera feeds, delving into various sub-computers to access important data, then using it to restore different systems is highly compelling. I could happily have done a couple more hours of that, and the way NoCode burns through those systems feels almost wasteful. I have a couple of other issues, too. On PC the controls are not great. Observation was clearly designed for a gamepad, and if you have one I’d recommend using it. My other complaint is about the lack of navigational aids, especially during spacewalks when your map is (for some reason) disabled. I understand that the disorientation might be deliberate, to facilitate the game’s tension. That said, if I’m literally playing as the station, I should be able to create a marker that highlights where I need to go. It feels weird to be this powerful AI who keeps bumping off the walls because it can’t find the door.

Observation might sacrifice its puzzling potential to the god of storytelling, but that doesn’t stop from being a stunningly spooky sci-fi thriller that’s well worth the ride.