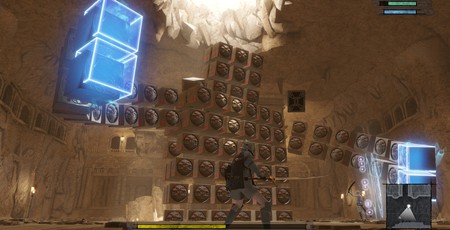 Nier Replicant is a loving remaster that still doesn’t quite make Nier the game it deserves to be. This update of the likeable yet deeply idiosyncratic 2010 RPG provides a substantial visual overhaul, improves the game’s notorious performance, and reworks the combat. All this makes it easier to appreciate Nier’s brilliant characters and unique storytelling. But deeper structural issues are unaddressed, as a result of which Nier remains one step short of greatness. 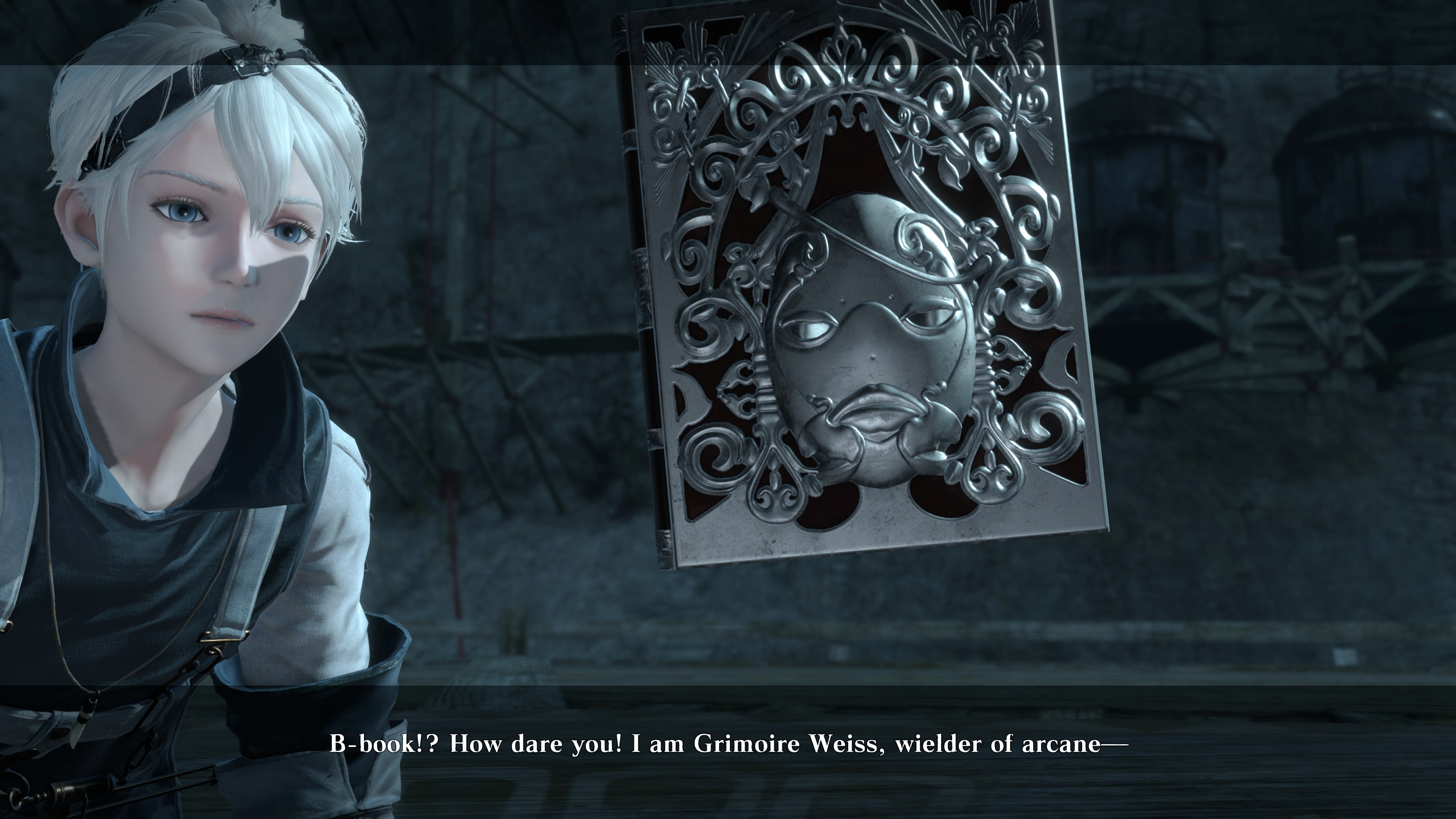 At its core, Nier is a fantasy RPG. Yet rather than being set in an alternate world, its events take place over a thousand years into the future. The story revolves around a teenage boy who, while trying to cure his juvenile sister of an illness known as the Scrawl, becomes magically bound to a sentient spellbook known as Grimoire Weiss.

If you’ve already played Nier, at this point you may be thinking “Wait, isn’t it about a father trying to cure his daughter of an illness known as the Scrawl?” In which case, you’re completely right. And also wrong. This is because there are two different versions of Nier, an American/European version known as “Nier Gestalt” which has an older protagonist, and a Japanese version named “Nier Replicant” with a younger protagonist. This Remaster is exclusively for the Replicant version, which is the developer’s intended version of the game. 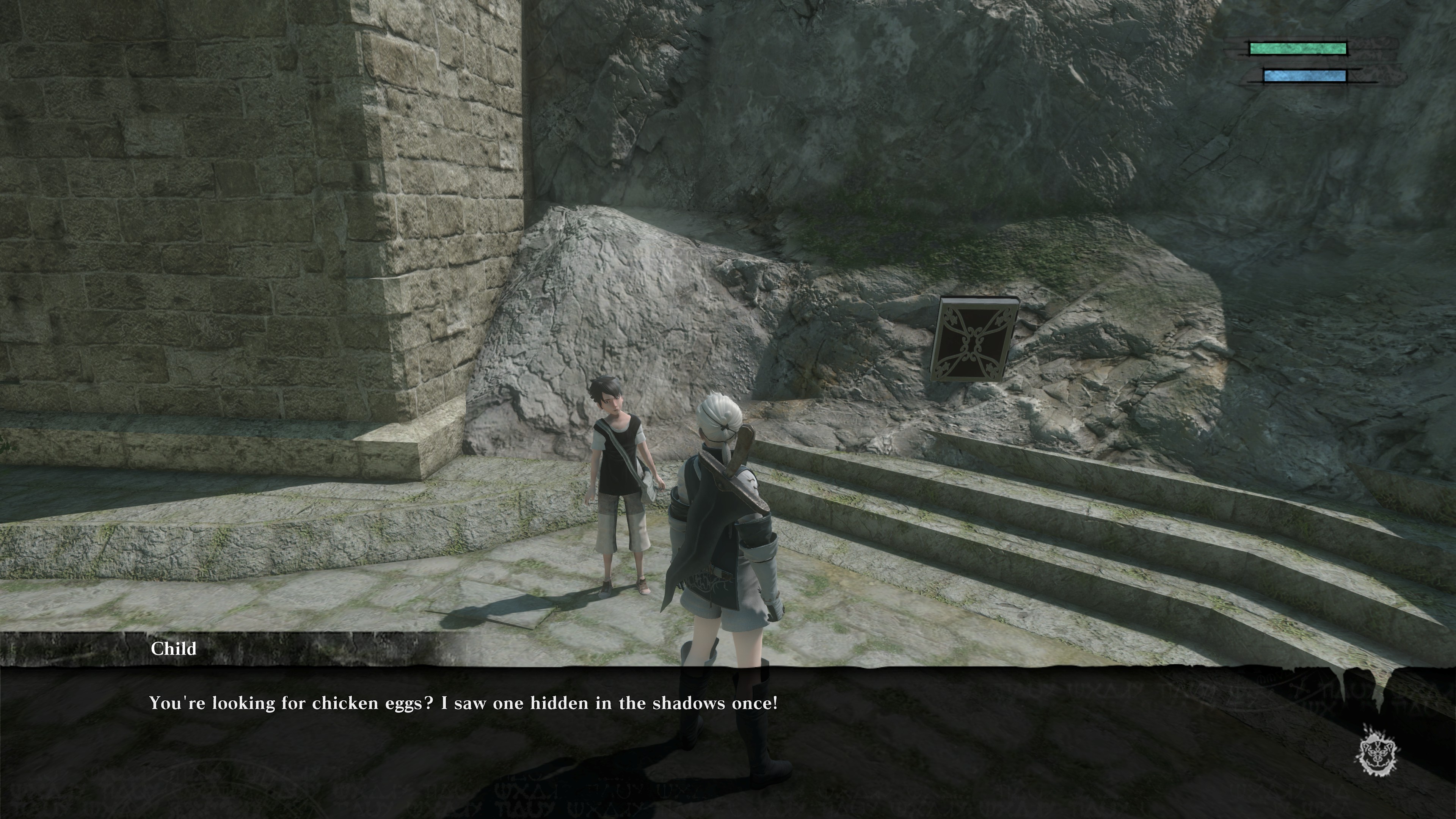 In practice, it’s also undoubtedly the better version. The character relationships make more sense when viewed from the perspective of Replicant’s talented yet inexperienced teenage protagonist, forced by circumstance into responsibilities that are beyond his age. The doubt he has about his ability to take care of his sister, the reluctant master/eager apprentice dynamic with Grimoire Weiss, his awkward friendship with the delightfully profane mutant sorceress Kaine. Even secondary relationships like that with the village leader Popola are more believable than if he’s a grizzled, worldly-cynical fortysomething.

This is important because Nier is all about relationships, boasting some of the best characters in the entire medium. The star of the show is undoubtedly Grimoire Weiss, whose haughty disdain for humanity is brilliantly portrayed by actor and professional Dungeon Master D.C Douglas, and hilariously undermined by your character’s relentless optimism and Kaine’s foul-mouthed putdowns. Speaking of Kaine’s, she’s also a great character. At least, once you see past her ridiculous attire. Like Metal Gear Solid V’s Quiet, Kaine’s grotty character design is spuriously justified by in-game lore. At best, the designers are having their cake and eating it, although it is amusing hearing this unapologetic sex object blasting everyone with language you’d expect to hear from a Glaswegian dockworker. 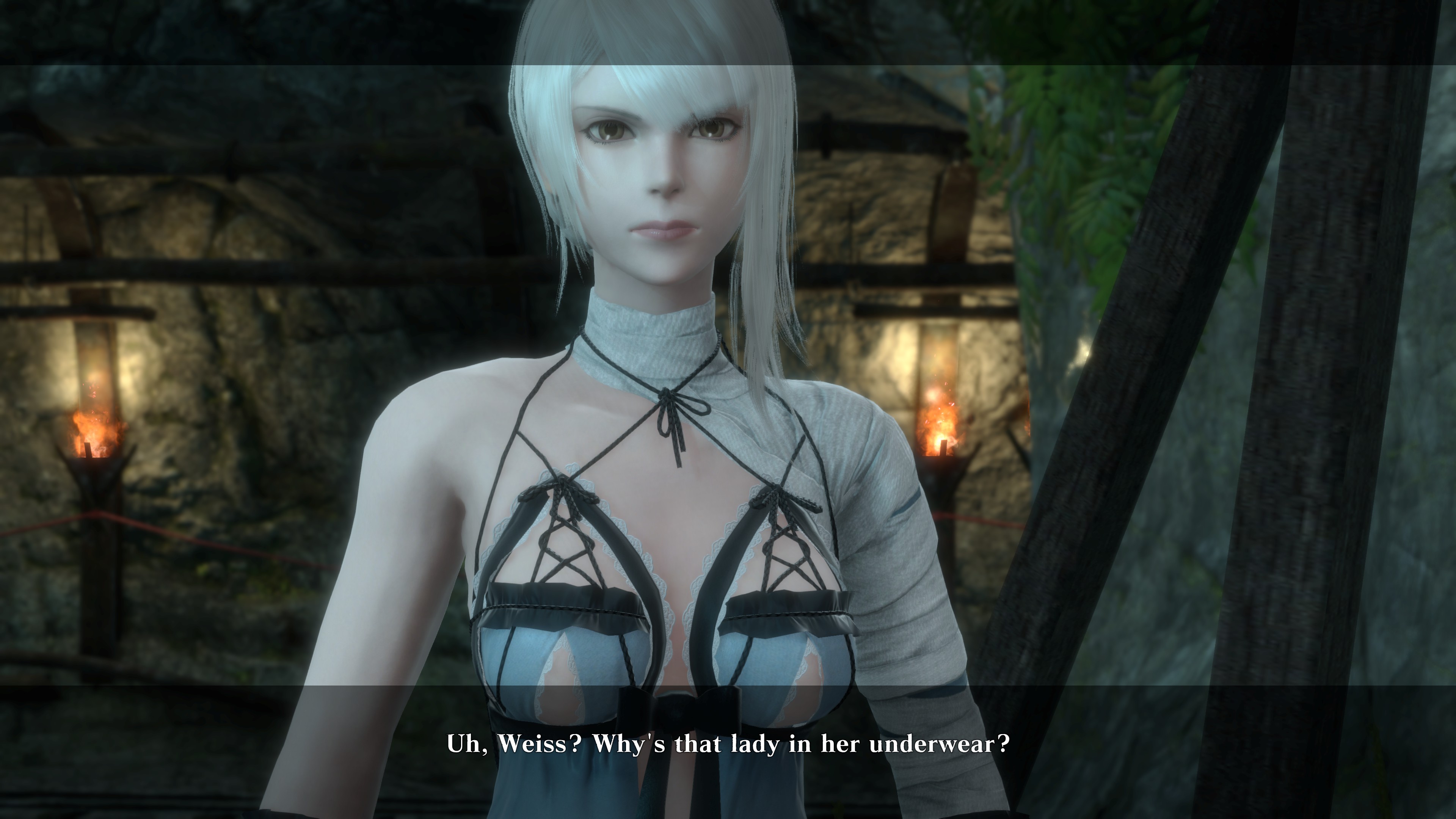 These (mostly) well-conceived characters have been treated to a full audio-visual overhaul, with brand new models and rerecorded vocal performances. The game world has been similarly updated, with completely new textures and an extensive colour rebalancing that makes the world feel more vibrant and alive. The world geometry is unchanged, however, the smallish open spaces and sparse interiors being the main indicators of the game’s age.

The other primary target of the remaster is combat, which has been tweaked to bring it closer to that of the more popular sequel Nier Automata. While mechanically identical to Nier, it’s a much slicker and fast-paced experience that lends a greater forcefulness to attacks. Yet while it mimics Automata stylistically, Nier isn’t a challenge-centric game like Automata is. While some of the game’s many bosses will punish the careless, the combat mainly exists to spice up the journey rather than necessitating any great mastery to progress. 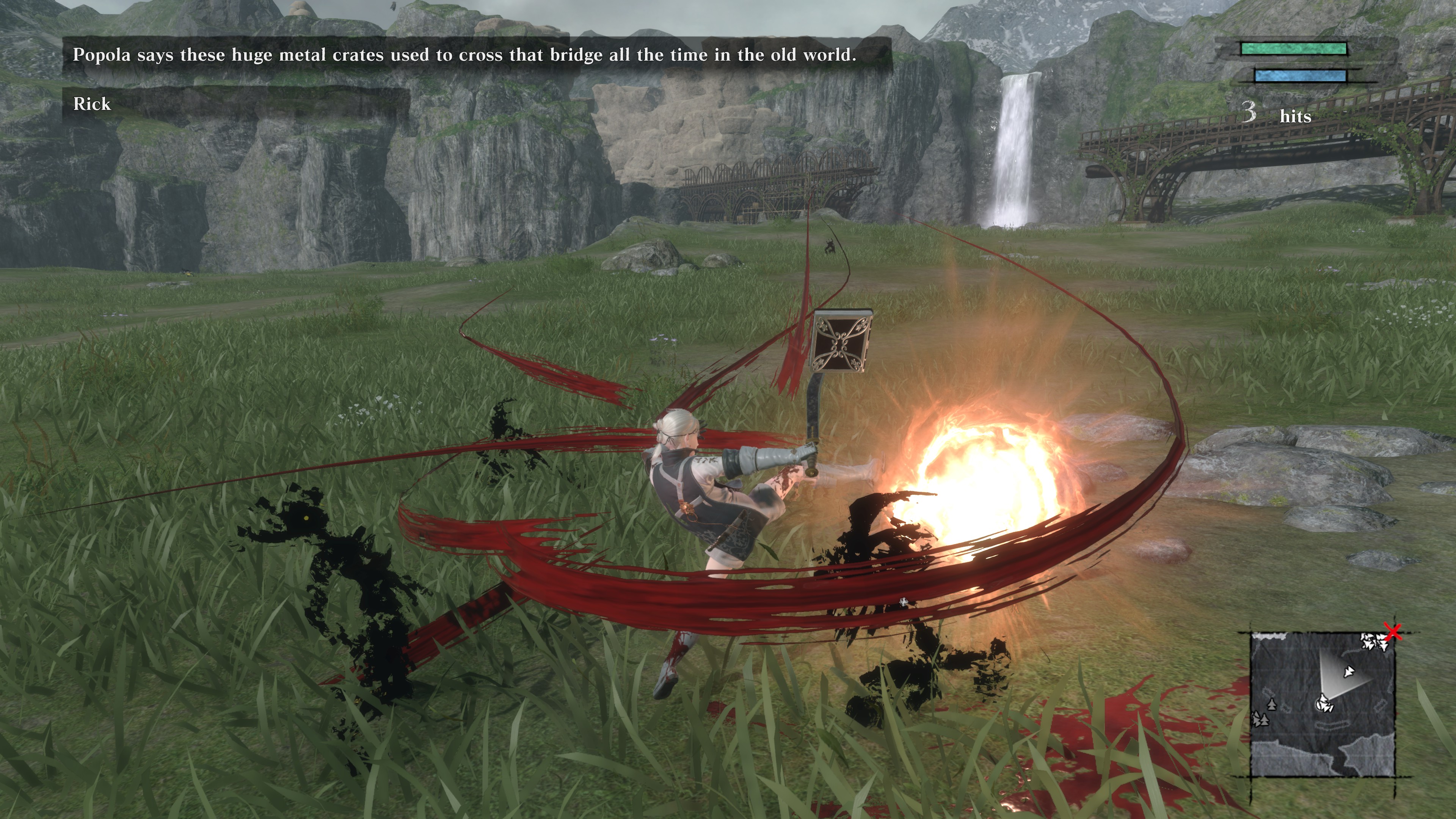 Systemically Nier is a wider-ranging adventure, one that loves to play with different forms and perspectives. One of its most interesting features is its brilliantly designed camera, which alters position depending on what the player is doing. At varying points, Nier shifts from being a third-person game into a side-scroller, a top-down action game, and even an isometric RPG, with seamless transitions between these angles.

Similarly, Nier experiments with different mechanics and storytelling methods. In one area it’ll take the form of a puzzle-platformer. In another, it becomes a text adventure wherein you explore people’s dreams and must solve riddles to progress (incidentally, the writing in Nier is superb, with a perfect English translation). As with the shifts in perspective, this all happens seamlessly. Often it feels like nothing has changed, yet you’re playing a totally different game from what it was half an hour ago. 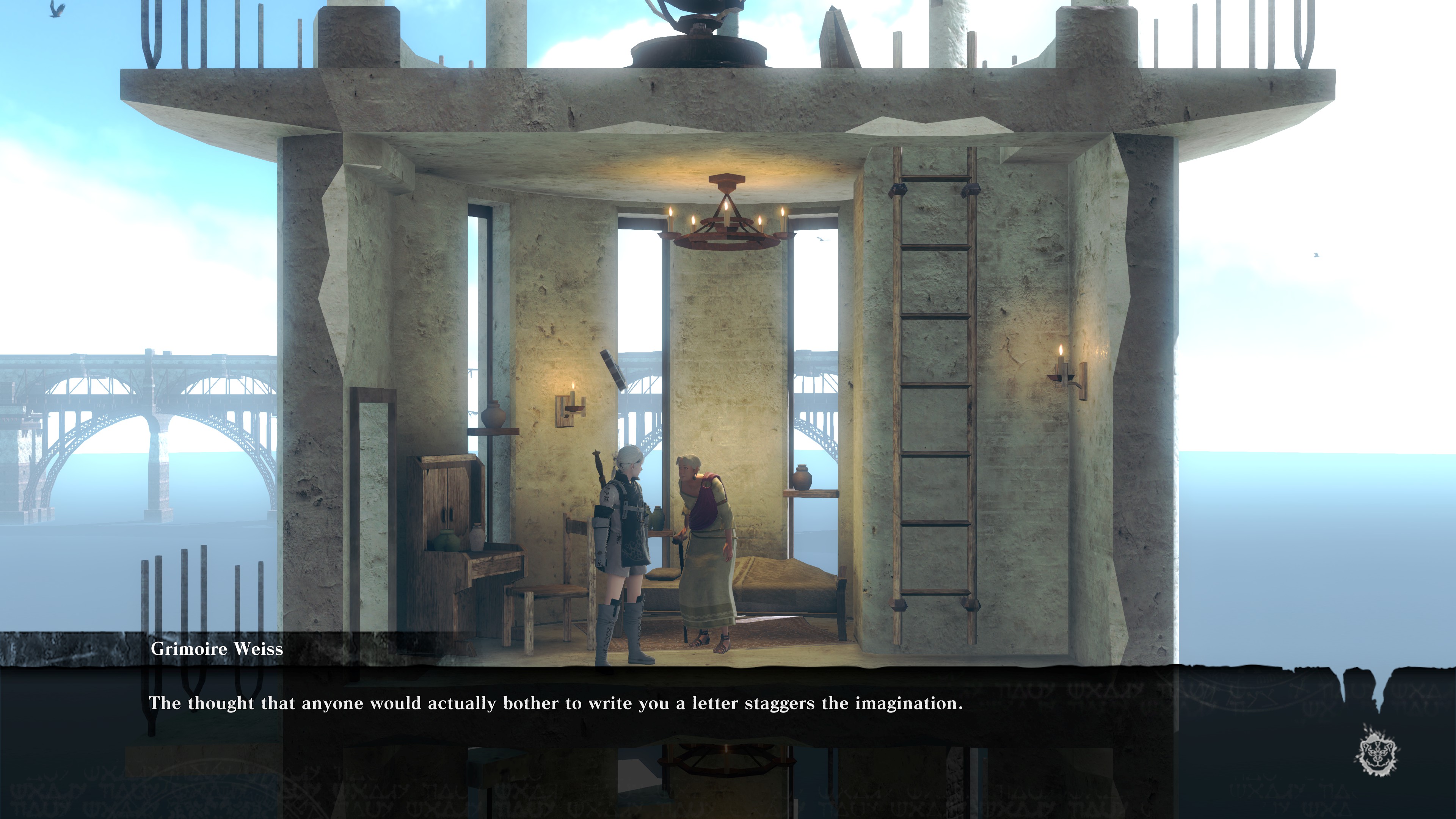 These elements, alongside the character relationships and general storytelling, are what make Nier such a beloved cult classic. The remaster makes all this easier to appreciate, yet despite the improvements Nier can still be a frustrating and tedious experience. The side-quests, which were dated on release, are now practically fossilised, barebones fetch and kill affairs little better than an early 2000s MMO. The problem is compounded by how Nier’s main quest constantly sends you back to areas you’ve already explored. Sometimes it does this Dragon Age II-style, giving a location a quick paint job and sprinkling new enemies around to make it vaguely different. But it also encourages you to revisit areas for the sake of grinding resources for weapon/equipment upgrades.

It’s hard not to feel like Nier would be better served if it ditched all its RPG elements and played as a straightforward linear action adventure, not least because it’s a game you have to play multiple times to get the most out of. Nier has one of the most interesting approaches to replayability of any game, whereby new playthroughs not only result in a bunch of new endings, but drip-feed you nuggets of lore that provide an entirely new perspective on the story. In fact, Nier is a better game when replayed, because you progress through the story faster and so the backtracking and repeated locations are less of an issue. 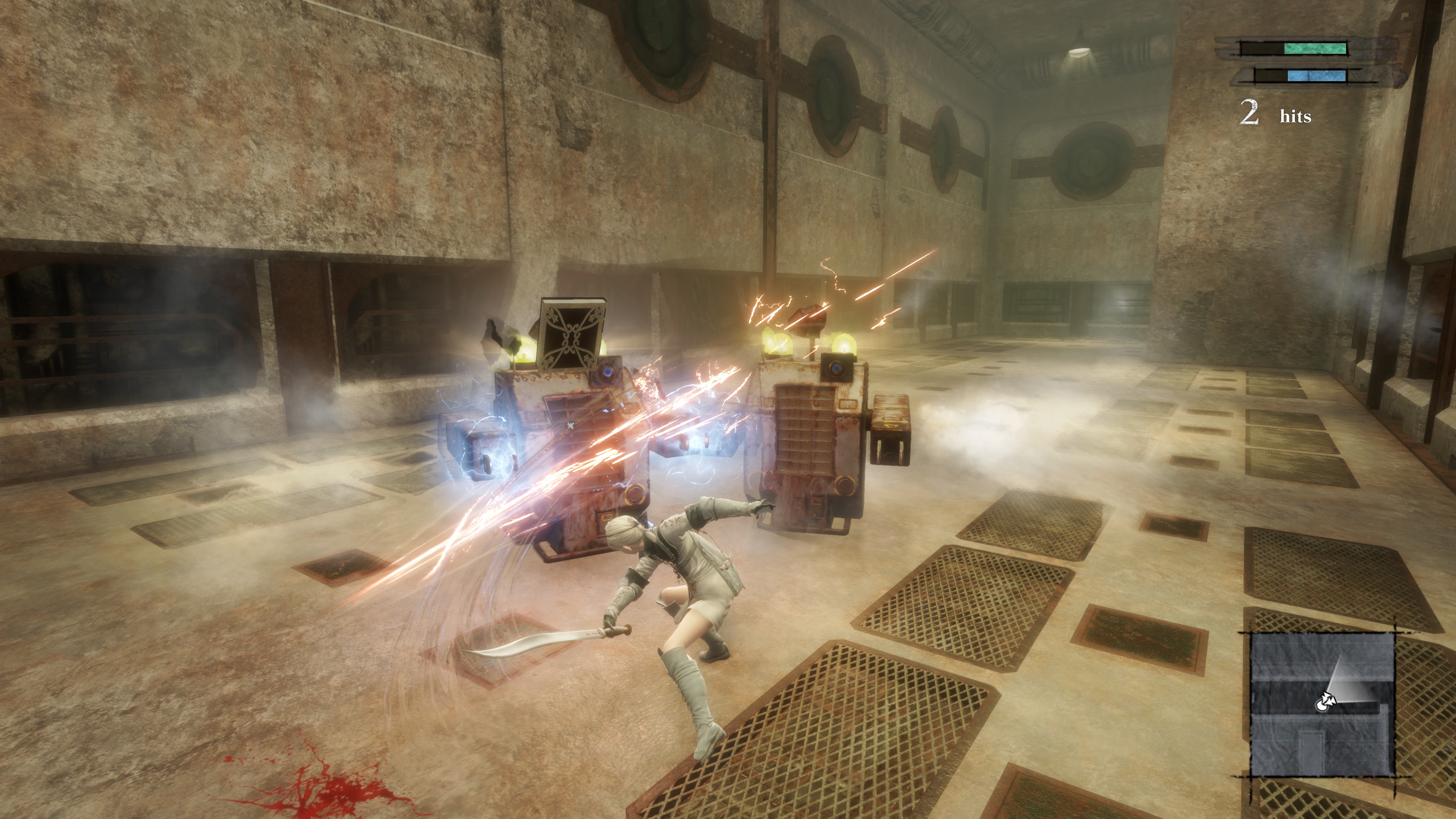 Nier Replicant is not one of the best games ever made. Even in its remastered state, its design remains too compromised for it to attain the heights that it grasps toward. But it is one of the most interesting games ever made, a fascinating meditation on action-RPG design, with some of the most unique RPG characters this side of Ion Storm’s Anachronox. I’m not sure if you should blow £50 on it, but it's worth checking out at some point if you missed it first-time around. 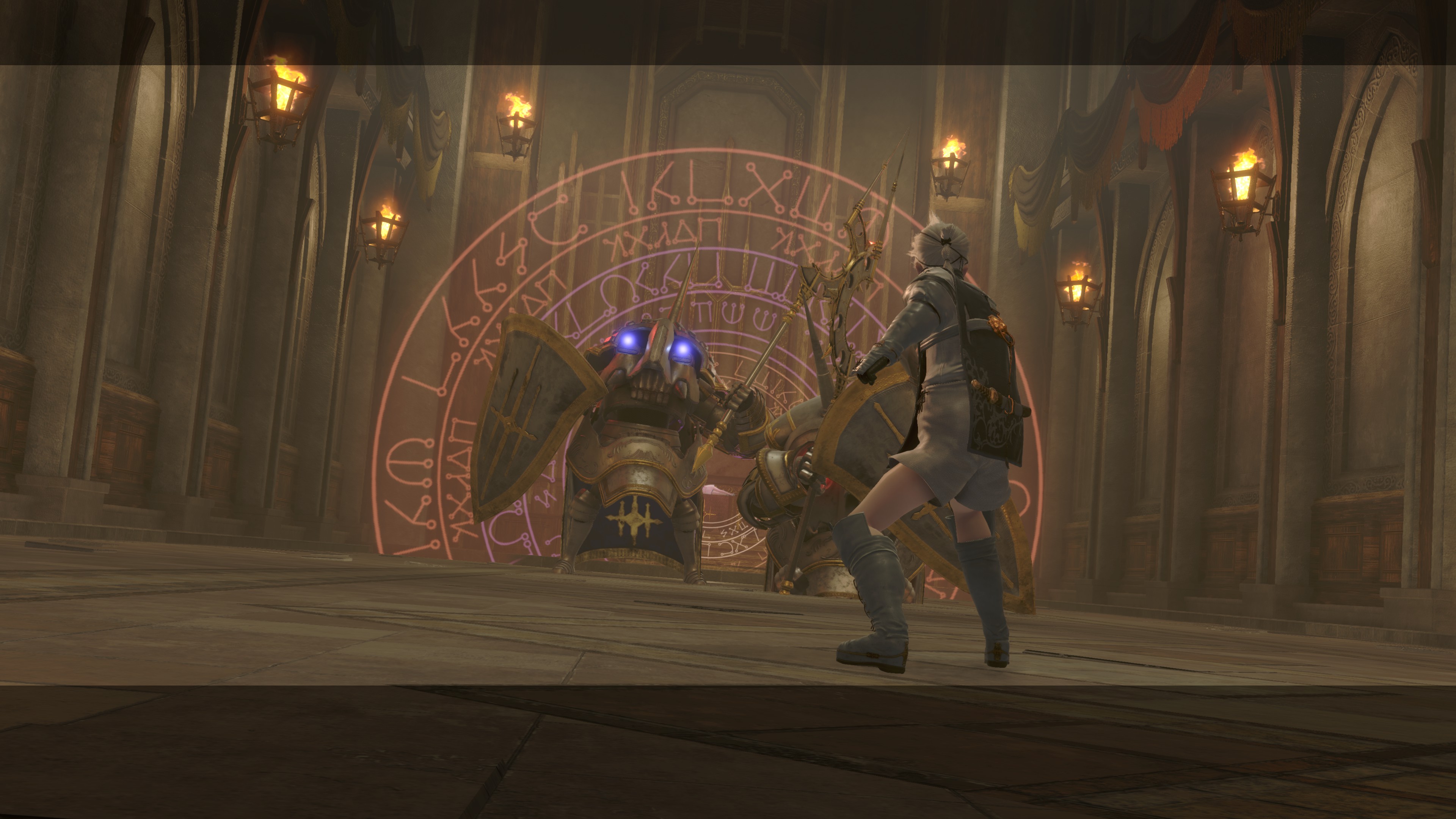