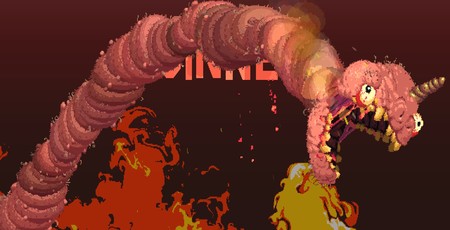 Nidhogg was defined by simplicity, a two-player duelling game where players were given two goals, kill your opponent and run to the end of the screen. Its fighting system comprised of a handful of moves, stabbing, throwing, jump-kicks, and rolls, all of which were bound to a single button. Yet while the rules were simple, the results were complex, unpredictable,  and most of all, funny. Though a duelling game on the surface, Nidhogg was really a vehicle for emergent comedy, a slapstick simulator where you could win a fight be throwing a sword into your opponent's face, or simply by legging it to the finish line while your opponent raced after you. And of course, the winner's victory lap was always unceremoniously cut short when they were eaten by a giant worm.

Simplicity was Nidhogg's strongest asset. But it was also its greatest flaw. The game offered only four stages to battle in and rudimentary netcode that made playing online as much of a battle as the game itself. In this way Nidhogg both demanded a sequel and didn't really need one, a collection of perfectly distilled systems in a package that was less than ideal. For said sequel, developer Messhoff has done the only thing it could, complicate things. The number of stages has been expanded from a measly four to a meaty 10, while the new art-style is about as far removed from abstract as it is possible to get. Most surprising of all is the introduction new weapons to Nidhogg's madcap duels, that add considerably more permutations to how fights can play out.

Underneath all this stylistic and systemic lacquer, however, it's still the same Nidhogg. You still battle another player in a grisly death-race to opposite ends of the screen, and you're still eaten by a giant worm if you win. Now, however, instead of being a static, crudely-drawn row of circles that floats across the screen like a title-card, the worm is a grotesque, pulsating animated monstrosity with bulging bloody eyes and rows of rotting teeth. Even before release, Nidhogg 2's art-style was the subject of considerable debate, and it certainly takes a while to adjust after the resolutely lo-fi approach of the first game. The duellers are no longer sleek, monochrome silhouettes, but bug-eyed cartoon characters from a similar stable to Earthworm Jim or Ren and Stimpy. The backgrounds, meanwhile, are absolutely crammed with detail, from gothic castles with extravagant feasts laid out on the tables, to a city in the sky where you battle on cloud-tops while the setting sun is flanked by upside-down rainbows. There's even a sequence where you fight inside the guts of a giant worm, with platforms made from viscera spiky ribs dangling from the ceiling.

My main concern with the aesthetic was how it might distract from the act of fighting your opponent. But to Messhoff's credit it doesn't. In some ways, its deliberate ugliness enhances the slapstick tone of the game, particularly the way the characters grimace and contort when run through by their opponent. The levels also include a smattering of obstacles that make fighting more of a challenge, such as platforms that give one player a height advantage, or pipes and grass that obscure both fighters from view. In the end, though, the art-style doesn't make much difference to how the game plays either way. The new weapons, on the other hand, do. There are three new weapons in addition to the standard rapier; a broadsword, a dagger, and a bow. Each of these has different strengths and weaknesses. The broadsword is powerful, and can knock an opponent's weapon from their hand with ease, but it's also slower than all the other weapons, leaving you vulnerable to a cheeky stab. The longbow obviously lets you kill your opponent from a distance, but it takes time to draw, and arrows can be deflected back at you. The dagger has less reach than the rapier, but is also faster to attack with.

The new weapons add a lot to the unpredictable nature of Nidhogg's combat. The game's best moments occur when a player wielding a broadsword accidentally runs onto the point of their opponent's dagger, or when, in a moment of desperation, your opponent throws their bow at you rather than loosing an arrow, leaving them both weaponless and embarrassed. Intriguingly, although you spawn with a different weapon each time, the selection is sequential rather than random. Part of me would prefer a random selection, but I understand it's designed this way to avoid you constantly spawning with a weapon you don't like. Besides which, you can tweak weapon spawning along with a bunch of other match variables. If there's a flaw in Nidhogg 2, it lies with the singleplayer arcade mode. As with the first game, this is a straight run-through of the ten available stages, and as with the first game, you can blast through it in less than half an hour. The only real difference is, as well as introducing you to the new stages, it also gradually layers in the new weapons. Although slight, it's still fun, and Nidhogg has always been open about its multiplayer focus.

In the end, I think Nidhogg 2 is a perfectly acceptable sequel to the original, providing more of those precise and comical duels, while doing enough of its own thing to warrant its existence as a standalone game. I don't think it's better than the first game, but I don't think it's worse, either. It's just...different, able to sit alongside the first game without doing it a disservice or rendering it obsolete.