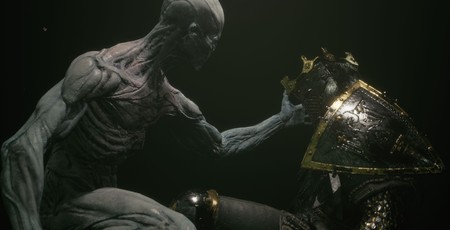 Look, I know it’s trite to compare games to Dark Souls these days, but Mortal Shell isn’t merely “like” Dark Souls, it’s living inside Dark Souls’ cupboard. It’s raiding Dark Souls’ fridge at night. When Dark Souls goes out for the evening, it puts on Dark Souls’ knickers and parades around the bedroom. It is so much like Dark Souls, in theme, in structure, in mechanics, that to artificially avoid such comparisons would actually be less helpful in reviewing it, like refusing to get treated for Coronavirus because you’re tired of hearing about Coronavirus. The comparison is particularly important here, because Mortal Shell is the closest any developer that isn’t From Software has come to replicating the secret sauce that burned all our tongues and forever changed our tastes back in 2011. That’s not to say it’s a masterpiece – Mortal Shell is still a long way off the glories of Hidetaka Miyazaki’s fantasy magnum-opus. But it does intermittently succeed in rekindling the feeling of Dark Souls, the mood, the mystery, and most of all, the masochistic pleasures of its combat.

Mortal Shell takes place in Fallgrim, a fantasy world so gloomy that trying to peer through its perpetual mists is likely to give you eyestrain. It’s a place that has forgotten itself, whose past histories and glories are so distant that memory itself has fossilised into a substance known as glimpses. These glimpses are now sought-after by the few remaining inhabitants, acting a dual role as part-currency, and part-drug. Into this amnesiac realm you stumble, a nameless and faceless husk of a creature searching for both a body to inhabit and a role to play. You eventually find one at the dilapidated Fallgrim Tower, where a masked giant shackled into the tower’s main shaft asks you to retrieve three “sacred glands” that will help free him from his prison. Naturally, these glands are scattered across the farthest reaches of Fallgrim, and standing between you and them are Fallgrim’s powerful and extremely aggressive denizens.

In your natural form, you are entirely unfit for this purpose. Even the lowliest bandit can cast your spindly body to the ground with a single swipe of his cudgel. Luckily for you, you have the unique ability to possess and reanimate other people’s bodies – known in-game as “shells.” Luckier still, there are four dead warriors decorating the scenery at various points in Fallgrim, waiting for you to slip through their armour like a cold breeze, transforming them into a weaponised puppet. As well as lending you endurance, shells serve two other purposes. Generally, they act as a reprieve against death. Getting killed while inside a shell will simply knock your spirit form out of it, and once you get up you can climb back into your shell to resume combat. This only works once, however, functioning much like system employed by Sekiro: Shadows Die Twice. Also, your spirit form is as vulnerable as ever while outside of the shell, so you need to be careful about retrieving it while enemies are around.

More specifically, each shell acts as a distinct class. Harros the Vassal, for example, is the base class, OK at everything, exceptional at nothing. Eredrim the Venerable, meanwhile is your tank figure, with a huge health bar but low stamina. You can switch between shells whenever you like, although for your first run at least, you’ll probably stick with whichever one you feel most comfortable in. Whichever shell you choose, the base mechanics of combat are identical across the three. You’ve got a light attack, a heavy attack, and an ability to dodge and roll. All enemies are tough, and most will absolutely annihilate you unless you approach them with care and respect for their abilities. Although combat orbits close to the Dark Souls formula, it’s also where Mortal Shell makes its biggest departures. To start with, there’s no block button in Mortal Shell. Instead, you have the ability to “harden” briefly turning your shell into stone and deflecting all incoming damage for a couple of seconds after the first hit. Unlike blocking, hardening is not exclusively a defensive move. You can harden during any animation, which means you can harden halfway through an attack. This can be used for feinting and to interrupt the rhythms of enemy attacks, and adds a lot of nuance to Mortal Shell’s combat.

The other major difference is that health is primarily regained by parrying attacks, opening enemies up to a special counterattack that drains enemy health bars and replenishes your own.  Combined with hardening, this system encourages you to get into enemies’ faces, to learn the nuances of both their combat styles and your own. Figuring out when to attack, when to harden, and when to parry against each enemy type makes for a wonderfully satisfying combat arc. Mortal Shell can be punishing, but it’s also possible to return the favour, carving through enemies with ease, and responding to damage taken with a swift counter that refills lost health. Considering that Mortal Shell is made by a team of just 15 people, the way it captures the atmosphere of Dark Souls is impressive. One of its more interesting features is how the story is tied to upgrades. With each new ability you unlock for a shell, you unveil a little more information about who that person once was, and their relationships with other characters and the wider world. Using different items, meanwhile, increases your “Familiarity” with them, When Familiarity is maxed out, it confers more information and more bonuses on that item. For example, a mushroom called the Tarspore will poison you if you eat it. But max out your familiarity with it, and it will instead cure any poison effect you suffer from.

That being said, Mortal Shell also has some obvious limitations. These exhibit primarily in environment design. Fallgrim lacks the intricacy and subtlety of Lordran, mostly adopting a straightforward “Hub and Spoke” approach, with each pathway leading you by the nose to a climactic boss fight. Also, one of those environments, the massive obsidian temple known as Seat of Infinity is far superior to the others, which are comparatively standard fantasy fare of trap-filled dungeons and frigid ice caves. They’re not badly designed, but they are boring by comparison. Another issue is enemy design. Or more specifically, enemy placement. Considering Mortal Shell’s size, there is a decent variety to opponents. But to keep the game challenging, Mortal Shell tends to pack environments with adversaries fairly tightly. This means you become over-familiar with each area’s enemy roster, and as a result combat loses some of its lustre. Bosses, meanwhile, are few and far between. There are about four main bosses and a couple of sub-bosses. About half of these make for decent fights, and none of them really live up to the awe that From Software’s mighty adversaries so often inspire.

Nonetheless, Mortal Shell still does an impressive amount with comparatively little, and although no classic, it is sufficiently strange and consistently entertaining. I hope that it does well for developers Cold Symmetry, as I’d like to see what the team could do with a proper budget available to them. For a game that’s wearing another’s game’s underwear, Mortal Shell cuts a surprisingly impressive figure.