If you aren't gifted with nimble fingers, you can always grab a piece of the scenery and chuck it at your opponent. I really like MXK's environmental interactions. If there's a vine hanging at the top of the screen, you can grab it and perform a swing-kick. If there's a water-font in the corner of the arena, you can duck your opponent's head in it. There's even a stage where you can throw an old woman at your adversary, which so surprised me that my concentration completely unraveled and I lost the fight. NetherRealm's other innovation is how damage is represented visually. Fighters can be bruised, burned, scratched or pierced depending on their opponent's abilities. It's an interesting if somewhat superficial addition, and ironically the effect is too subtle. Often the characters merely look smudged with dirt and soot, which isn't particularly impressive.

Anyway, onto the structuring of these fights. MKX's headline act is the story mode, which has seen a tremendous amount of effort put into it, including two hours' worth of detailed cut-scenes played over the course of twelve chapters. Each of these focuses on a single character and involves roughly four or five fights. There are flashbacks, flash-forwards, battles, betrayals, unlikely alliances and desperate last-stands.

Does all this effort result in a tale worth listening to? Honestly, not really. But it is fun in a B-movie way. The tone is utterly serious, but if the writer's tongue wasn't sequestered squarely in their cheek while working on the script, I will eat my own keyboard. On the downside, the cut scenes can be exhaustively long, and many of them contain QTE sections that are entirely arbitrary. Sitting underneath the story mode are the "Towers", a series of matches that can be played single or multiplayer, as a straightforward arcade mode or with various randomising elements. Alongside this is the multiplayer "Faction War" mode, that lets you team up with other players and compete online for points and prestige. Further goodies can be unlocked via the "Krypt", where you spend "Koins" (bekause the Kool Kats of Mortal Kombat only Konverse with K's, kiddo) to unlock new character outfits, fatalities, and other "Kollectibles" (ok I'll stop now).

At the time of writing, temperamental servers prevented the Faction War mode from running properly, which was rather frustrating. Aside from that I encountered no obvious problems technical faults. But I do have one gripe that I'd like to discuss in detail, and that's to do with the fatalities. Put simply, I hate them. Now, I don't hate them because they're violent, although in MKX they are astonishingly violent, to the point where I found many of them outright repulsive. But the reason I hate them is because they're also boring. I can't think of a less interesting way to end a fight that's all about player skill than with what essentially amounts to a cut-scene. And that only happens provided you input the code correctly. If you do it wrong, the end of the fight is even more anticlimactic, as the winner bounces around trying to perform the fatality, and the loser wobbles on the spot and then falls over.

I get that fatalities, brutalities, babalities and so forth are a core component of Mortal Kombat, but the technology is such now that they could be made far more interesting. Why not let me finish my opponent off in a more creative way? Netherrealm are already halfway to creating a procedural damage system and are pretty good at the interactive environment shtick. Why not take those features one step further and let me use them at the end of the fight, combining them to create my own finishing move? I have similar feelings regarding the pornographic "X-Ray" shots. If you crush somebody's skull by slamming their face into the floor, that's probably going to affect their fighting ability. I think there's scope to make a really interesting, dynamic fighting game where physical injury and death are more than just gore porn. Mortal Kombat X isn't that game. Instead, it sticks to what it knows its audience enjoys, namely gratuitous shots of shattered skulls, shredded muscles and dismembered body parts, all of which are entirely superfluous to the actual game that you play. This is not remotely surprising, but I do find it a little disappointing. MKX is an accomplished fighting game; fluid, varied, detailed and generous. Yet for all its censor-baiting grisliness, it remains a conservative game too. 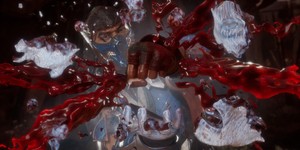 Jeri Ryan has explained the story behind a new Mortal Kombat trailer on the internet.