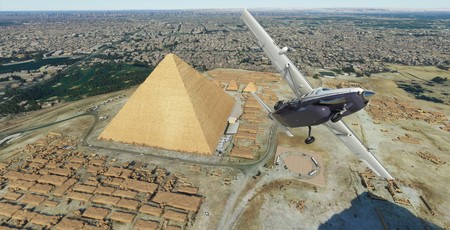 Microsoft Flight Simulator has always strived to be true to the mechanics of flying, but what makes this version such a triumph is how it is true to the spirit of it. Flight, after all, is humanity’s ultimate expression of freedom, the story of how a wingless, featherless animal species not only took to the skies but conquered them. There are problems with this narrative, of course, ranging from economic to environmental. But that doesn’t change the fact that the act of flying as a human being is magic delivered by science. That phrase “magic delivered by science” also describes the experience of playing Microsoft Flight Simulator for the first time, because what developer Asobo Studio has done here is handed you the world on a plate. You can go anywhere you want in Flight Simulator. From Newcastle to New York, Islamabad to Istanbul, Manila to Melbourne. Not only that, but the places you go will (mostly) feel entirely authentic, exactly like looking out of the window while on a work hop or a vacation jaunt.

Asobo’s game embraces the spirit of flying in a way no previous Flight Sim has done. Or more specifically, in a way no previous Flight Sim was able to. Flight Sim’s geographical miracle is the result of a nest of technologies that either weren’t available or weren’t applicable ten years ago. Through a combination of streaming, satellite mapping, and object-generation algorithms, Flight Simulator takes the satellite data from Microsoft’s Bing Maps, spruces it up with lighting and shadow, simulated weather systems, and accurately placed (although not always accurately rendered) trees, buildings and vehicles, then streams the final product to your PC. The results of this make for some truly breath-taking landscapes over which to travel. Whether you’re flying over vast urban sprawls like London or Istanbul, the endless green carpet of the Amazon, or rugged terrain like that of Iceland or the Peruvian Andes, Flight Simulator expertly conveys that feeling of pressing your nose against an airline window, cricking your neck as you gawp as zigzagging coastlines or beetle-like traffic thousands of feet below you. It should be said that not every place is equally beautiful. While some cities like London and San Francisco have been hand-crafted to be highly-accurate recreations, others are dependent on the algorithm, and like all algorithms it tends to make sweeping generalisations. For example, Edinburgh Castle is represented a block of 1960s flats, which was disheartening for this adoptive Scot.

Still, it feels churlish to complain about small details like that when the entire world is at your fingertips. And in a very smart move, Flight Sim puts zero barriers between you and that world (apart from learning to fly its planes, which we’ll get to in a moment). Setting up a flight in Flight Sim is as simple as clicking on a spot on the map and pressing “Fly”. The flights themselves can be as simple or complex as you want to be. You can go in the full shebang, doing all the pre-flight checks and powering up the plane before taxi-ing to the runway and waiting for your slot. Or you can start on the runway, or even in the air, copy-pasting the co-ordinates of a place you want to see and spawning right over the top of it. Yet all the wonders of Asobo’s technologically marvellous world would be worthless if the actual flight simulation sucked. It doesn’t. Again, flexibility is Flight Sim’s motto, giving you all the tools and assists that a budding pilot needs, then letting you slowly strip them away as you become more comfortable with the controls. To that end, there’s a flight school that instructs you on the basics of flight in a Cessna 152. Here you’ll learn how to steer your plane in the air, how to adjust trim to maintain speed and altitude, the trepidation of your first take-off, and the terror of your first landing.

Once you’ve finished flight school, you can start grappling with the nuances of individual planes, all of which have different speeds, cruising altitudes, cockpit instrumentation, and other idiosyncrasies. Switching from flying a Cessna to a Daher TMB 390 is like going from a Ford Focus to a Tesla. Not only is it faster and nimbler, its advanced digital avionics provide much more detailed information about both your plane and your flight. Flying an Airbus A380 is an entirely different experience. Its bulk makes it more stable in the air than other planes, and therefore easier to maintain its general speed and heading. But it also demands greater forethought in individual movements, especially when it comes to landing. Whether you’re a casual sightseer with an Xbox controller, or a hardcore simulationist with a HOTAS and under-desk rudder-pedals, there’s enough accessibility and enough grit here to cater to both of you. That isn’t to say Flight Simulator is devoid of problems, however. While there are countless locations to explore in Flight Sim, there are only twenty planes to explore them in. I suspect this is both a sales and retention strategy on Microsoft’s part. No doubt new planes will be added in over time, although whether they’ll be free, paid-for, or a mixture of the two, I can’t say. It’s worth noting that, if you’re the simulations sort, it’ll take you plenty of time to master those twenty planes, to comprehend what every dial and button in the cockpit does, and how to apply that to your flights.

More broadly, the freedom Flight Simulator offers comes at the cost of structure. Beyond the Flight School, the only other set content is a roster of challenges designed to test to piloting and navigational skills. Personally, I’m glad that Flight Sim doesn’t force you to “unlock” any of its content, or funnel you down a particular set of “missions”.  But if you’re someone who craves an established sense of progress, then you might find the initial experience of “here’s the world! Go fly!” somewhat overwhelming. Lastly, and this isn’t really a flaw, but Flight Simulator is absolutely crying out for VR. According to Asobo, VR support is coming at some point this autumn, but initially it’ll only be for the HP Reverb G2, a headset co-developed with Microsoft. Honestly, I feel like this is short-sighted on Microsoft’s part. VR doesn’t have a huge user-base as things stand, so limiting the support to a device hardly anyone is going to own seems like cutting off your own nose to spite Oculus’ face.

All things considered, however, Flight Simulator is superb. Not only is it a great flight-sim, the freedom of exploration it offers makes it one of the few simulators that almost anyone can get something out of. Given it costs just shy of £60, I don’t think I’d recommend buying a copy unless you expect to get some serious time out of it. But if you’re curious, you can download it via Xbox Gamepass for as little as £4 a month, which frankly is an absolute steal. After a long hiatus, Flight Simulator is back, and it soars.