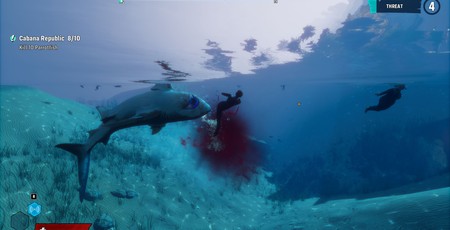 Fiction from Jaws to Sharknado has painted the shark as a terror of the oceans, Public Enemy No. 1 of the aquatic world. But did you know there are fewer than 100 shark attacks on humans each year? Humans, by comparison, are reckoned to kill around 100 million sharks a year. So, who’s the real terror of the seas, eh? Obviously, the answer is dolphins, the smug, bottle-nosed gits. Think you’re so smart, do you? Well, which one of us is more likely to end up in a tin of tuna, you chittering berks.

Sorry, got a little distracted there. My point is that statistically, sharks have been shirking their man-eating duties. Come on, sharks! There are over seven billion humans on this planet. Think of all the murderers, corrupt politicians, and Wall Street executives who have gone completely uneaten over the years. A hundred shark attacks probably aren't enough to get rid of all the serial killers currently running around. What if Hitler had been eaten by a shark, eh? What then? If you’re a shark and you’re reading this, it’s time to step up your game, and be more like the shark from Maneater.

Maneater is described by developers Tripwire Interactive as a “shark RPG”, but in practice it’s more like Carmageddon with fins, a simple and loosely-structured aquatic rampage that’s has notional story and structure, but is really about causing as much chaos as possible. You start out life a bull-shark pup who is brutally cut out of its mother’s womb by a shark-hunter named Scaly Pete, who marks you with a knife and tosses you back into the shallows. From there, your goal is REVENGE, on Scaly Pete, on humanity, on basically anything that has blood. But you’re not going to do much damage as a glorified dogfish, so first your mobile tooth-factory needs to bulk up, to get hench. You do this by swimming around and gobbling up everything that moves in the ocean as well as every icon that appears on the map.

For the first few hours, this is all entertaining enough. The basic controls of swimming and eating are simple to grasp and fun to play around with. You bite enemies to damage them and can whip them with your tail to stun them. You can also “dodge” attacks from shark-hunters or other predators like barracudas or alligators. Do this at the right moment, and it’ll open up certain enemies to a counterattack, where you can clamp your jaws around them and  “thrash” them around in the water, dealing massive damage.

Eating humans and other animals earns you XP and a bunch of other resources, as does completing set missions like killing specific enemies or going to an area to eat a set number of opponents. XP is used to “grow” your Shark, which is one of Maneater’s ideas that I really like. Your shark has several set stages of growth, from a lowly pup through “teen”, “adult”, all the way up to the colossal “Meg”, at which point your shark is basically a giant scar with teeth. Yet while these stages are where your shark changes most dramatically, it actually increases in size every level, and it’s satisfying to watch your shark go from barely being able to fight off a barracuda, to being able to swallow them in a single bite.

Maneater is also superbly presented. The underwater environments surrounding Port Clovis are beautifully realised and fun to explore. Each new area has a whole different vibe to it, ranging from Everglades-like marshlands to crystalline bays. Many areas have subterranean cave systems that can be explored, often containing hidden drug caches that provided extra resources (yes, this is extremely weird) and collectable number plates. Surprising as it may seem, one of the best elements of Maneater is the storytelling. Yes, Maneater has a story, and it’s complete rubbish. But it’s very deliberately-crafted rubbish that’s thoroughly entertaining. It assumes the structure of a reality-TV show like Deadliest Catch or Alaskan Bush People, notionally centred around the life Scaly Pete, but really focussed on you. As you play, the show’s narrator constantly offers random shark facts, daft quips, and just general commentary on what’s happening on screen. The script is genuinely funny and the narration – by Chris Parnell of SNL and Rick and Morty fame – is delivered with the exact intonation of one of those shows.

I also can’t fault Maneater for style or silliness. While you might catch a few humans paddling in the water, most of your human-hunting missions will force you out of it. It’s hard not to laugh at your three-metre killing machine flopping around on land, gobbling-up screaming beachgoers or obese golf-club members. The game also sports a GTA-style alert system, whereby killing too many humans will result in shark-hunters coming after you with harpoon guns and dynamite. Kill enough of these, and you’ll attract the big-name shark-hunters, heroes of their own sad reality. They’re pitched to you as minibosses, but they’re just as vulnerable to a shark’s teeth as any other human. Being able to leap out of the water and gobble them up before they’ve fired off a shot is wonderfully cathartic. You’re like a living reality-check for idiot rednecks. This is something else I like about Maneater. Most shark fiction portray sharks as the villains of the piece, as terrifying, real-life monsters that need to be defeated. But in Maneater, you’re unquestionably the hero, a cartilaginous vigilante seeking vengeance for the havoc humanity has wrought on the natural world. You exist to even the score, to pay back in blood every trolley and toxic-waste barrel thoughtlessly dumped in the ocean, every swamp drained to make way for condos or a golf course. Maneater doesn’t bang the drum of environmentalism, but it does offer hints of the silent catastrophe that’s slowly consuming our world. It’s in the police-tape that floats in the water like yellow kelp, in the nuclear exhaust pipe that belches searing radiation into the coastal waters of Port Clovis.

Maneater, then, does a lot well. But it suffers from two major problems that significantly undermine the fun. While the game’s open world is unique in terms of environment design, the game itself is comprised almost entirely of the cookie-cutter side-quests that you’d normally avoid doing until last in any other open-world game. Go here and kill eight things, now go there and kill ten things. It isn’t especially creative with its brilliant premise, and it also lacks more bespoke campaign missions to act as a backbone and shore the experience up.

I could potentially forgive this but for the second problem, which is that mechanically Maneater sorely lacks variety, too. The biting, tail-whip, and thrash moves that you learn in the tutorial is the entirety of your abilities for about 70 percent of the game. Toward the end you’ll unlock some more abilities like a ram attack and a bioelectric attack. But it isn’t nearly enough to sustain the sheer amount of hunting and combat that’s involved in the game.

The result of this is, while Maneater’s world might seem impressively large, its waters run disappointingly shallow, and monotony sets in within a few hours. It’s unfortunate because there’s lots about the game that I do like, and I think the premise has huge potential. But it’s squandered by repetition and a lack of mechanical diversity. Maneater may be the apex predator in the ocean, but in the realm of open-world gaming, it’s prey for more advanced lifeforms.