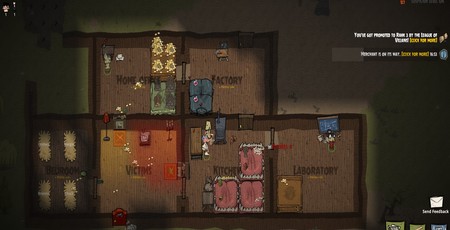 Machiavillain’s biggest selling point is its core concept. It's a base building strategy game that tasks you with building the perfect haunted mansion, creating a series of creepy areas to beguile and intimidate young visitors before you lure them into traps and murder them. Alongside this, you have to build hidden areas for your army of minions to sleep, train, and eat. Ever wanted to see the logistics that goes into a group of kids being murdered in a B-movie? Me neither, honestly, but Machiavillain's personality and interesting concept drew me in regardless.

Most of your time with Machiavillian will be spent trying to convince your loyal zombies to scrape up the viscera of your most recent victims before the newest group arrives, to avoid them getting spooked. The rest of the time you'll function as a parental figure to your minions, making sure they eat right, get proper sleep, and occasionally build a new room for you to fill up. An obvious touchstone would be classic "be the bad guy" strategy Dungeon Keeper, but Machiavillian treads a very different path. You're not building a dungeon here; you're instead trying to build a haunted house, keeping all evidence of monsters out of sight until you're ready to make a kill. To avoid every house being a first-room slaughter-fest, there are a series of rules that will generate you more scares, including killing the virgin last and separating and killing off your group one by one, instead of immediately dumping them into a pool full of sharks with lasers on their heads.

Instead, you'll spend a lot of time building rotating walls and other horror movie tropes to entice people to separate before you deliver their end. The concept is handled very much tongue in cheek, but unfortunately a lot of the humour is poorly written, a mix of tropes that sit on just the wrong side of hammy and lines that are just poorly translated. Machiavillain spends most of its time getting in its own way, sadly. The game's introduction lacks immediacy, and it's obtuse, too: The whole part where you have to build a haunted house at the front of your massive monster lair to draw in unsuspecting victims? The game doesn't really explain that, and I restarted my first run after several hours when it turned out my initial plan of assaulting the groups with sheer numbers as soon as they entered the first room was highly inefficient. The game didn't make this clear, though, and so my entire operation generally involved everyone desperately trying to clean up body parts and mop the floor, before eating the snacks and returning into the main room to attack the next group.

Once I got a real sense of what was going on, I started again and enjoyed the game a lot more - but my first impression was a slightly reserved 'Is this it?' The second attempt was much more successful, but I did find myself struggling still with the massive amount of micromanagement that you have to do to be successful in the game. Monsters need to have their jobs changed regularly to ensure they're doing the right thing, and the beasties seem to spend a lot of their time doing busy work: Jason Voorhees was a more terrifying villain before I realised he must spend the time between kills sharpening his machete and nipping into Pret to get a sandwich and a protein egg-pot to keep his strength up for all of that murdering.

Sadly, your monsters can never be left to actually get on with things; they won't attack automatically and they continue to get on with their chores with no thought for whom they might bump into on the way. This means you need to take direct control of your units to tuck them away, something that requires several clicks and means that while there are "guests" in your house you can't get any actual chores done. There are hundreds of little gripes exactly like this that make playing and enjoying Machiavillian hard work. The idea of building a gruesome murder mansion is unique and interesting, but the game does a very poor job of explaining itself, something exacerbated by the fact that several of the game's systems just don't quite work.

Machiavillian is flawed yet engaging, and for taking a series of interesting decisions it should be applauded, however it appears to be the rare game that would have seen a benefit from percolating in Steam's Early Access program for a little while to clean up the translation and UI issues, and work out some of the niggling kinks in a game that should be great but is brought down by a thousand tiny problems.

I'm going to go back to Machiavillian in a few months with the hope that all of these issues are ironed out, and I sincerely hope that it grows into the audience it deserves after a few patches.