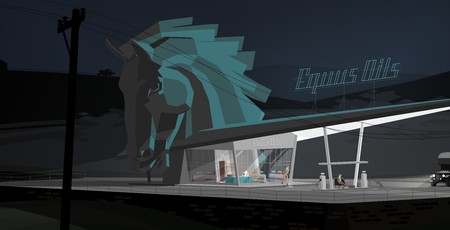 After around a decade of development, Cardboard Computer has launched the fifth of Kentucky Route Zero’s five acts, meaning its surrealist point-and-click adventure game is, finally, complete. It’s a game that has become known as much for its lengthy periods between releases as its eerie imagery and lyrical prose. Even in its incomplete form, however, KR0 received a lot of acclaim, with some critics claiming it to be one of the best adventure games ever made. Having only played the first two parts around six years ago, I decided to go back and experience the whole adventure start to finish. And Hmm. HMM. I reckon the evangelists were half-right. There is greatness in Kentucky Route Zero. Of that there can be no doubt. But there were also moments where my eyes almost rolled inside my skull and shot out of my nose.

Kentucky Route Zero starts out as a simple story about a man trying to deliver a package. The man’s name is Conroy, and his destination is 5 Dogwood Drive, hidden somewhere along Kentucky’s Interstate 65. Stopping off at a gas station named Equus Oils, Conroy learns that Dogwood Drive actually lies beyond a mysterious road known as the Zero. The gas attendant doesn’t know how to get to the Zero, but he knows someone who does, and so Kentucky Route Zero begins to spin its long, eloquent, and sometimes meandering yarn. KR0 has the style and structure of a point-and-click adventure, but it’s really an extremely slick visual novel. Rather than taking its cues from fantasy fiction or anime, its inspirational roots are dug into American literary fiction; your Steinbeck, your Faulkner, your Cormac McCarthy and your Annie Proulx. It’s isn’t purely inspired by fiction, TV shows like Twin Peaks are another obvious touchstone. But it is nonetheless a game highly invested in a very specific legacy of American prose.

And it’s to Kentucky Route Zero’s great credit that it can live up to those revered writers. It is never less than superbly written, bell-clear, erudite and possessing an incredible eye for detail. It also blends the real with the surreal with startling elegance. One of the best examples occurs right at the game’s outset, when the owner of Equus oils asks you to hit the breaker switch in the gas station’s basement. Descending into the dark, you discover a group of people playing a tabletop RPG. They don’t speak to you directly, but you overhear them talking about how they lost a glowing die. By the time you’ve picked the die in a dusty corner of the basement and tried to return it, the players have vanished. When you explain the incident to the gas attendant, he simply shrugs it off as a trick of the light. Kentucky Route Zero is filled with such eerie vignettes. In many ways you could read it not as a single narrative but a long string of short stories. It’s less “Choose your own Adventure” and more “Choose your own anecdote.” The main interactive agency the player has is not so much influencing how the story goes, but selecting which stories to tell and how to tell them. In one scene, Conroy can choose to remember all the times drinking has got him into trouble, or choose to push those memories aside and recall other, happier elements of his life. It doesn’t affect the thrust of the narrative in any significant way, but it does alter the colour of the story being told.

Over time, these individual tales build to form, not a plot exactly, but a thematic sense of how events are progressing. Memory is a key theme. The constant references to ghosts are one example of this, but the game also obsesses over old technology and the importance of keeping it running. One of the other main characters, Shannon, is a TV-repair specialist and general gearhead, and the journey almost regularly requires you to fix and tinker with computers, phones, PA systems, and so forth, maintaining them in the face of almost certain obscurity. As the tale pushes forward, it becomes clear these old bits of tech represent the soul of the game’s working-class community, one that is slowly being hollowed out by a local energy company. This approach to storytelling works superbly at first, when the cast is relatively small and the story is anchored by this journey to Dogwood Drive. From Act three onward, however, the narrative becomes increasingly scattershot, and the use of reminiscence as a storytelling device becomes more of a formula that the game becomes overly reliant on. Almost every person you come across instantly falls into telling you about how they once had a cat called Graham (pronounced “Gra’am”) who was actually a girl cat and one day Graham saw a bright green bird out the window and dashed through the catflap to chase it and was never seen again and to this day they wonder if Graham ever caught her bird. It’s like someone converted Twin Peaks’ Black Lodge into a retirement home, a competition of who can unspool the longest, weirdest yarn.

I’m not entirely sure what changes in those later acts. Partly I think they’re simply too long, with acts three and four running around twice the length of the first two (the final act is shorter again, and better for it). Also, as I touched upon, the framing device becomes more artificial. Act IV’s structure is almost entirely “Go to a place. Reminisce about stuff. Move on.” Some of these individual sequences are great, such as when you stop at Sam and Ida’s subterranean fish restaurant, and they tell you how exactly they manage to keep it running. But this is preceded by two individual tales that are basically a biology lesson about bats and mushrooms, which just reads like the developers read books about bats and mushrooms and couldn’t escape the urge to share all that freshly acquired knowledge. Part of the issue is Kentucky Route Zero is so interactively lightweight that its success hinges entirely on whether the story engages you. As the story becomes more meandering and its whimsical quality more formulaic, it increases its chances of losing your interest. I also didn’t care much for the interludes between the chapters, especially the one that precedes the third act. This is literally a three-act play stuffed with exhaustive dialogue that you have to sit through before the story continues.

I enjoyed how the journey ultimately turns out, how the tale becomes less about Conroy as it goes, and more about the importance of community in the face of predatory capitalism. I just wish it had arrived at its destination a little bit sooner and shaved off a few of the pit-stops along the way.