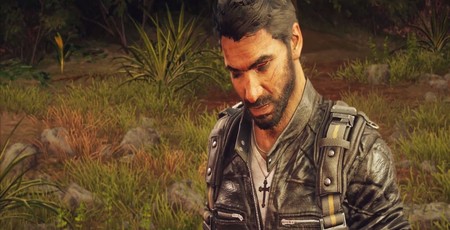 Everybody thinks of Just Cause as the game with the grappling hook. I think of it as the game with C4. The grappling hook is a great traversal mechanic and fun to tinker around with, but my favourite moments in Just Cause have always involved planting a shedload of C4 in a base and setting it off all at once. Then walking away from the resulting explosion, naturally. Hence I was surprised to find that Just Cause 4 has got rid of the C4. It’s a baffling decision, although I’m less surprised by the result, which is akin to a footballer getting rid of his legs. Just Cause 4 uses all sorts of other mechanics as crutches, ranging from ridiculous weather-based weapons to a grand strategy metagame that involves dispensing squads of revolutionaries to an ever-shifting front line.

Some of this works, some of it doesn’t. None of it is as satisfying as dropping into an enemy base and chucking around enough plastic explosive to blow up the Moon. Just Cause excels in simple pleasures, but the fourth game apparently wants to be more than a knockabout open-world shooter, and its uncertainty in approaching this results in a highly muddled experience. This is demonstrated by its bizarre approach to storytelling. Just Cause 4 sees professional regime toppler Rico Rodriguez out to oust yet another dictator from another idyllic island nation. This time, however, said dictator has access to multiple “Weather Weapons” that enable him to control the elements, weapons that he uses to knock Rico out of the sky early in the game. What’s more, these weapons were designed by Rico’s own father, a fact that Rico understandably has mixed feelings about.

Now, I don’t expect Just Cause games to have a great story. In fact, I don’t expect them to have any story beyond, 'That guy is bad, go blow up all his stuff.' Just Cause 4, however, seems to think I want a gritty tale of vengeance served via the means of long and protracted cutscenes, with a main character who looks like he should be checking into rehab rather than fronting a rebellion, seeming to resent his own natural heroism. I’m not joking. At times Rico verges on Max Payne levels of miserable. He wears a scraggly, unkempt beard that looks horrible thanks to the weird way Just Cause 4 renders hair, and goes through the whole game with this permanently weary expression that makes him look like he needs to sleep for about a thousand years. Throughout the story, the game weaves this strange thread emphasising the fact that Rico is getting old, and it feels completely out of touch with the experience of the game itself.

Speaking of which, Just Cause 4 is still capable of producing some excellent emergent action. The combination of grappling hook, parachute, and wingsuit makes traversing the world a thrilling and active experience, while combat feels much more weighty than previous games. One of Just Cause 4’s better ideas is to introduce a powerful alt-fire to every weapon: a grenade launcher for your assault rifle, mini-rockets for your sniper rifle, etc. It enables immediate responses to when the AI throws a tank or a helicopter at you. That said, the limit to two weapons is stupidly restrictive, and alt-fire doesn’t make up for the lack of C4. It can also be a truly spectacular game. The missions surrounding those weather weapons are fantastically OTT, but even better is when you unlock the power to wield those weapons yourself. The alt-fire for the lightning gun enables you to conjure up a thunderstorm that blasts helicopters from the sky, which is as satisfying as it is ridiculous.

I’ve had fun playing Just Cause 4. The problem is this fun emerges despite the game’s structure rather than because of it. Just Cause 4’s biggest flaw is that player-driven destruction is no longer the focus. Now, causing chaos unlocks “squads”, a resource that is deployed to advance your “front line” from one of Solis’ many regions to the next, unlocking new weapons, equipment, and story missions. The representation of these front lines is really cool, a persistent battle between the evil Black Hand army and your own Army of Chaos, stretched across the landscape like a scar. But you never interact with these front lines in a meaningful way, making them essentially pointless.

At the same time, different regions require different numbers of squads to conquer, with some requiring no squads at all and others providing you with additional squads. This makes progression very odd. Early on, you find yourself blowing up objects in your own territories to gain enough chaos to move on. Later, you can ignore the chaos system entirely, and fill your squads simply by conquering regions in the right order. The mission structure is equally strange. Alongside the story missions, there are base missions you need to complete to make a region conquerable. These all take place within key infrastructural complexes, such as factories, airports, and so forth. Each one has its own unique objective, like opening the floodgates on dam or destroying all the missiles in a giant artillery base.

I like the bespoke nature of these missions in theory, which is preferable to the way Just Cause 3 forced players to complete a checklist of stuff in every town. Rather than letting you approach these mission how you like, however, each one comprises a series of cookie-cutter sub-objectives that have you dashing around the complex like a contestant in the Crystal Maze. 'Hack these three terminals! Now activate these three generators! Now cover this guy while he hacks a terminal! Now steal these three cars! Now defend this area! You’ve got ten seconds left! Come out! Come out!' For all intents and purposes, it’s another checklist, only now it’s linear and less explicit. At times, it feels like Just Cause 4 is worried you might have fun in the wrong way. This is particularly evident with the grapple mods. The game places so much emphasis on the grapple mods. 'You can tie a dude to a balloon! Or tie two helicopters together and make them crash into each other! Or use the rocket boosters to send a car into orbit!', the game positively shrieks. And if that wasn’t enough, each of these three mods has its own set of sub-mods that let you tinker with the parameters of how they work, such as filling the balloons with hydrogen so they explode or making your retractor pull objects together faster.

There are several problems here. Firstly, Just Cause 4 is way too chaotic to use these mods with any precision. After dabbling with the balloons for a while, I almost exclusively used the retractor, because it’s by far the most practical and efficient way of dealing with most situations (aside from, you know, just shooting everything). Furthermore, most of the mods are locked away in side-missions. This in itself is fine, but the side-missions themselves are locked away until you complete activities like stunts or solving temple-based puzzles. This is not fine, as it forces you to grind for unlocks which are less useful than the weapons and vehicles you can more easily unlock through the main missions. The biggest problem, though, is that the menu design is utterly horrible. With the grapple mods, there are three different potential setups, which can each have three different mods assigned to three different button combinations to produce three different effects. If that sounds confusing, that’s because by Christ it’s confusing. Trying to figure out how to assign the mods the way you want them is borderline incomprehensible.

The menu woes don’t end there. The default keyboard configuration is one of the worst I’ve encountered in years. For example, the Map button, that’s the MMMMMMMMMMap button, is assigned to 1. Anyone who has so much as walked past a PC knows that 1 is assigned to pistol, punch, or nothing at all. Worse, to scroll through the various menus, you have to press 3. Not 2 and 3, just 3. It’s baffling. Whoever ported Just Cause 4 to PC has obviously rebound the default pad controls to random keyboard buttons rather than actually creating a proper keyboard control system. All told, Just Cause 4 is a mess, an unfortunate combination of an overcomplicated structure and haphazard execution wrapped in a dodgy PC port. It’s a shame, as I like some of its ideas, and there are times when you can see the old Just Cause shining through.  Like its bizarrely haggard main character, however, the game is burdened by the weight of its own past. Too frightened to keep things straightforward, Just Cause 4 ends up obstructing the simple pleasures the series is usually so good at providing.