Into the Breach Review 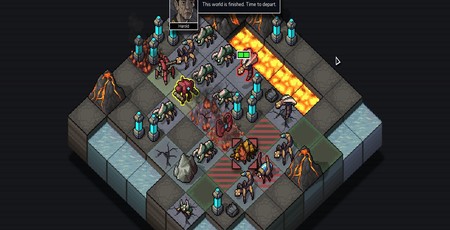 The first couple of hours with Into the Breach feels like a death by a thousand cuts.

At first, Into the Breach offers up only constant failure. Battles will be won but will cost you ever increasing amounts. The insectoid Vek can be fought back for another turn, if you're willing to sacrifice the Mech and the squishy pilot within to block a projectile that would wipe out a city block, killing the occupants. So, you take the hit and lose another friend to the bugs. Humanity is saved, albeit briefly, and the mechs survive for another battle, weaker now and fighting harder enemies with odds that get longer and longer.

Into the Breach has turned failure into an art form. The game's concept is gigantic: Towering mechs reminiscent of Pacific Rim charge into battle to take out insectoid Kaiju and save the world. The game's size is miniscule; fights take place in a tiny arena over five turns. Scuffles amongst the city blocks feel claustrophobic, like movement puzzles to be solved. The five-turn limit is a hand around your throat, too, with every turn that ends emphasising both your salvation at the end of the mission and the objectives you still have to achieve. Lose (or occasionally, win) the game and your pilots go… er… once more into the breach, with you selecting a single pilot to take through to your next run. This creates a cohesive narrative for the roguelike game, but also moments of bittersweet as, when a time pod falls to the ground containing the remnants from an unseen timeline, a character remarks that each pod marks another failure for a far off timeline.

I've won once in 15 hours with the game. It's not just that I'm an idiot, although that could also be true. It's that, while the signposting in the game is remarkably good, chain reactions or unwinnable situations sneak up on you in the early game, and it can be a long time before you convert what Into the Breach requires into learned behaviour. For a game about time travelling back to the past, Into the Breach seems determined to make you predict the future.

Thankfully, with all these failures, the world that the game builds up is strong. Into the Breach is never more than a b-movie pastiche, but that's the whole point. The illusion is weaved through both the quips and dialogue of its characters, but also the narrative structure of the game: Each mission is handcrafted, with objectives that involve protecting trains delivering key supplies, getting rid of mountains that the Vek can hide inside, or even breaking cities out of a deep freeze. These create unique scenarios in combat, but they also show a world that's struggling, each corporate island wrestling with its own disasters in addition to the giant insects. The combat is engaging, and with each collection of mechs your possibilities change dramatically. A personal favourite are some fire-immune mechs that aim primarily to set the entire map on fire, pushing enemies around in the fire to deal constant damage over time. Another set of mechs specialise in pushing the Vek into attacking each other, while one set spreads damaging smoke everywhere which obscures enemies and you, preventing attacks from within. You can mix and match your team of mechs, creating some ridiculous strategies for experimentation.

New power cores and weaponry can be grabbed from the falling time pods that randomly appear, but also a shop that allows you to spend the reputation you've earned with corporations before departing for the next island of bug-shaped hell. Power cores allow you to empower your mechs in both mundane ways - make a missile do more damage, make a flamethrower belch its inferno further, etc. -- and also some truly interesting ways, with a grappling hook bestowing a shield on hooked allies, or an electricity flail passing its current harmlessly through buildings, allowing you to attack more enemies at once. The combat itself is fairly unique, with every enemy announcing their attack, where it will be, and how much damage it will do. The player then has to use the allied units at their command to push enemies around and damage them to the point where the attacks effects are nullified, or at the very least, mitigated. It's like Chess, if Chess was about hopeless struggles against the odds.

The game's smartest choice, however, isn't the movement-based combat, the wide mix of different mechs, the intelligent writing, or even the time travelling mech concept. It's the choice to make your health bar, analogous to FTL's hull heath, the health of the city's power grid. See, your mechs are powered by the buildings full of civilians, and that's power that drains as those buildings get reduced to rubble. Suddenly, you care about the collateral damage, and in a thematically appropriate way, you're more than happy to put your mechs in the way to save a city block full of civilians.

I adore Into the Breach, and I think it's one of the best small-scale strategy games I've ever played. Subset Games has delivered a follow-up to Kickstarter success story FTL that somehow builds on that game's themes: hopelessness, claustrophobia, and a focus on the minute details. We've had a string of good games this year, but for what it's worth, I think Into the Breach is 2018's first must-play game. Don't let it pass you by.