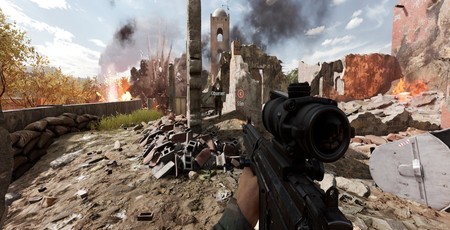 I wish I could like Insurgency: Sandstorm, but unfortunately I bounced off it harder than a bullet off the side of a tank. This undeniably spectacularly multiplayer FPS is also gruelling to the point of being traumatic, and if you don’t have eyes like a telescopic eagle, you’re going to spend a lot of time sat around watching other people having fun. It’s also, frankly, a bit light on features. A couple of years ago I spoke with the lead developer of Sandstorm, and he told me all about the single-player campaign they were working on. In it, you played a female leader of an Iraqi militia who seeks to take back her home town from hostile Insurgents. It sounded amazing, a hybrid of Call of Duty and ArmA III with a character-driven core. I looked forward to playing it.

On launch, however, there is no story mode. The closest you get is a brief single-player tutorial mission, which happens to be one of the best tutorial missions I’ve ever played. Commencing with you alone in the streets of a nondescript middle-eastern town, it gradually scales up to a defensive battle against a platoon of Insurgents as they attempt to cross a bridge. The only downside to this mission is the rather sluggish AI, which I suspect to be the reason behind Sandstorm’s lack of a broader single-player campaign. In terms of play, Insurgency’s closest neighbour is Tripwire’s Rising Storm. The unranked multi splits up two teams of 16 players into several soldier classes. You can have as many vanilla riflemen as you want, but only one sniper and a couple of heavy machine-gunners. At the top of your team’s tree is the Commander, who can use binoculars to call in various kinds of support ranging from helicopter gunships to pummelling artillery. Where Insurgency has the edge on Rising Storm is in its audio/visual design. Rising Storm wasn’t exactly lacking in this area either, but Insurgency is on another level. There must be a hundred different noises for bullets hitting different kinds of material, from sandbags to corrugated iron to wire fencing. Meanwhile, explosions have a terrifyingly deep crunch that sends dirt and debris and body parts flying in all directions. If an enemy commander drops an artillery barrage on your head, the noise of it is truly phenomenal.

I would say that Insurgency approaches Battlefield levels of quality, but it’s not an entirely fair comparison. Where Battlefield is very flashy, Insurgency is grittier, earthier, less cinematic. When the battle is in full flow, it is incredibly intense. Insurgency feels pretty good beneath the fingers too, providing enough weight to movement and aiming to feel authentic, but not to the point where the game becomes difficult to control. For all its quality, however, I find Insurgency’s multiplayer difficult to enjoy. This isn’t necessarily because it’s challenging, although I will admit to being thoroughly outclassed by the game’s ridiculously competent player-base. The problem is more to do with the amount of downtime in multiplayer. When you die, you can only respawn when your team captures an objective, at which point your entire team respawns at once. I understand the logic behind this. Firstly it means you spawn as a team that can coordinate rather than a constant drip-feed of cannon fodder. Also, it makes for some wonderful moments of heroism when the last man standing manages to capture an objective, bringing the entire team back into play.

The problem is that when you die, you’re then stuck waiting for an unspecified amount of time. It could be less than a minute, but it could also be far longer. Death, meanwhile, can come extremely quickly, often coming down to who sees who first. When you’ve been stuck in Spectator mode for the best part of five minutes, and you spawn only to be killed thirty seconds later by an enemy that you never had a chance of spotting, it’s a real momentum killer. Fortunately, you can knock together a pseudo-single-player experience by playing cooperative matches locally with AI squad mates. These missions are checkpoint-based affairs, which see you moving forward through large, architecturally complex levels, taking and defending control points, and destroying weapon caches with explosives. Your team spawns in “waves”, which replenish every five minutes, with bonus waves awarded for completing objectives.

I think Insurgency plays better across these larger maps, with teams skulking between cover, using suppression and support items like smoke grenades to get a tactical edge. Sadly, there are only about six of them, and with the exception of one or two, they're all a similar mix of rocky rural terrain and dusty urban streets. The cooperative mode is also much better with a close-knit group of friends than random internet folk. If you want to play alone, your AI squad mates are competent enough shots but cannot be instructed, tending to do their own thing while you try to fill in the gaps. It’s still fun but not as enjoyable as it could be. Alongside these more general issues, I’ve also encountered a few bugs, such as some pretty horrendous texture pop-in when starting a mission, and even respawning after death. Meanwhile, I’ve seen players fall through the map while in spectator mode, although mercifully it hasn’t happened to me yet. I haven’t encountered anything game-breaking, fortunately, but some of it is rather unsightly.

I’m happy to accept the fact that Sandstorm might simply not be for me. Yet given the bugs and the rather truncated amount of content, I get the sense that Sandstorm isn’t quite the product that New World Interactive wanted it to be either. There’s undoubtedly potential here, and from a presentation perspective Insurgency can be a fiercely compelling FPS. But I feel like it needs more to it before it is worthy of a recommendation. 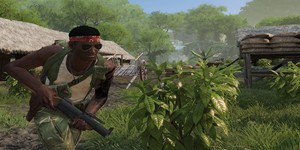