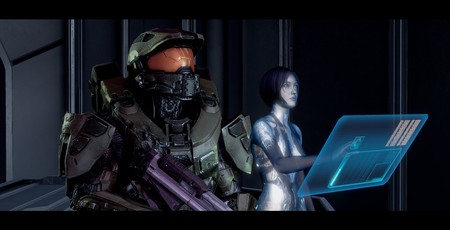 Halo 4 is generally considered to be the weakest entry in the series, so you’d be forgiven for not skipping around with glee now that the game is finally available on PC. Yes, the Master Chief Collection has finally closed out its gradual PC launch, leaving Halo 5: Guardians as the only title not available on the Cuboid of Power. 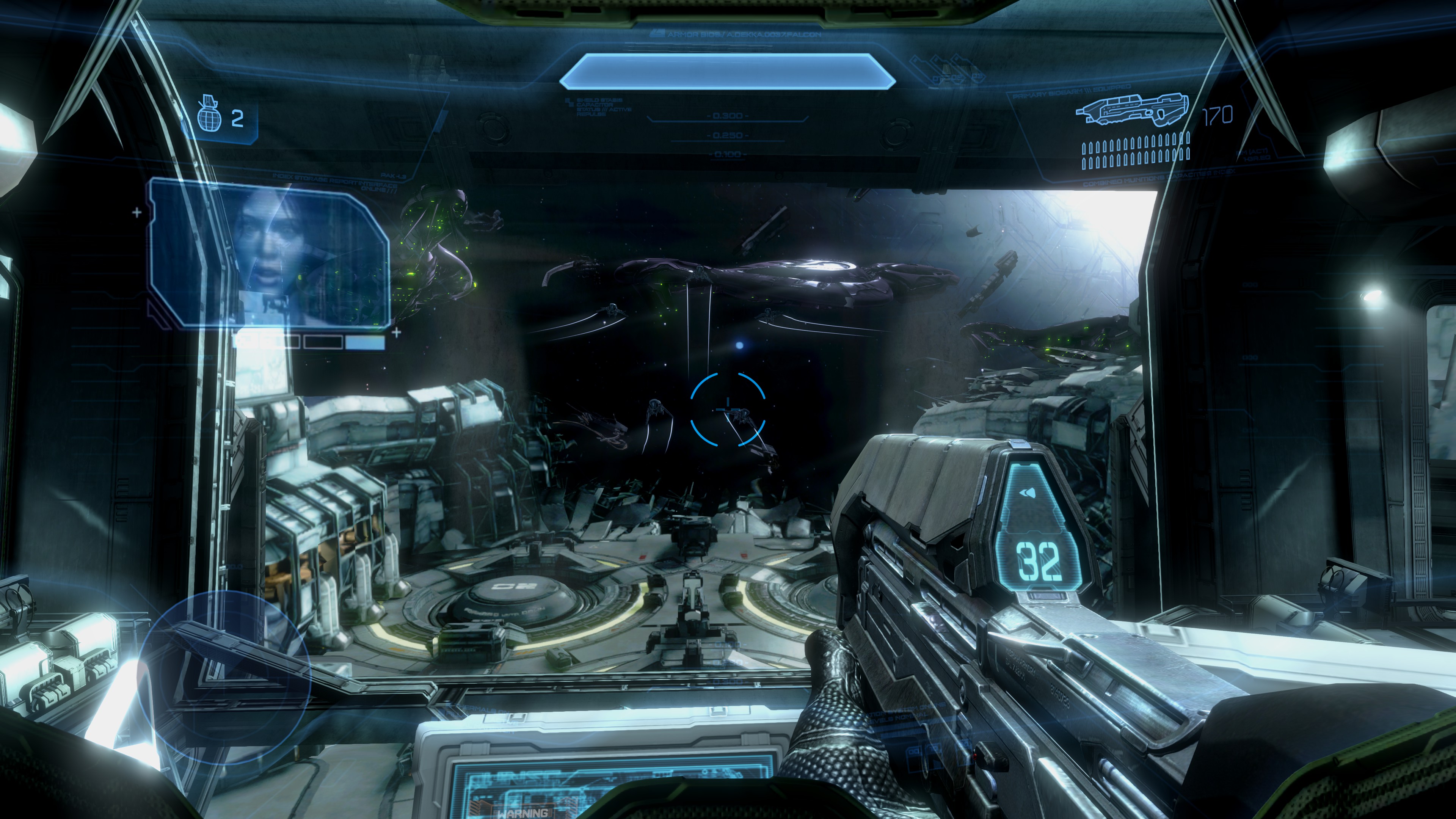 Yet while Halo 4 may not have the pedigree of the other games in the series, I think it would be a mistake to dismiss it as mediocre. Halo 4 takes a slightly different approach to storytelling than the other games, while still offering a campaign that is varied, inventive, and action packed. Moreover, 343 Industries work hard to modernise the game’s antiquated combat, making it arguably the best feeling of all the Halo games.
The campaign kicks off with Master Chief exactly where he was at the end of Halo 3, stranded in the rear-end of the spaceship Forward Unto Dawn. In hibernation for four years, Master Chief is awoken by Cortana when a Covenant splinter-faction boards the vessel. After fighting them off, Master Chief follows the fleeing Covenant to a nearby Forerunner installation known as Requiem, where his attempts to find a way back to Earth bring him into contact with a powerful new adversary calling itself the Didact. 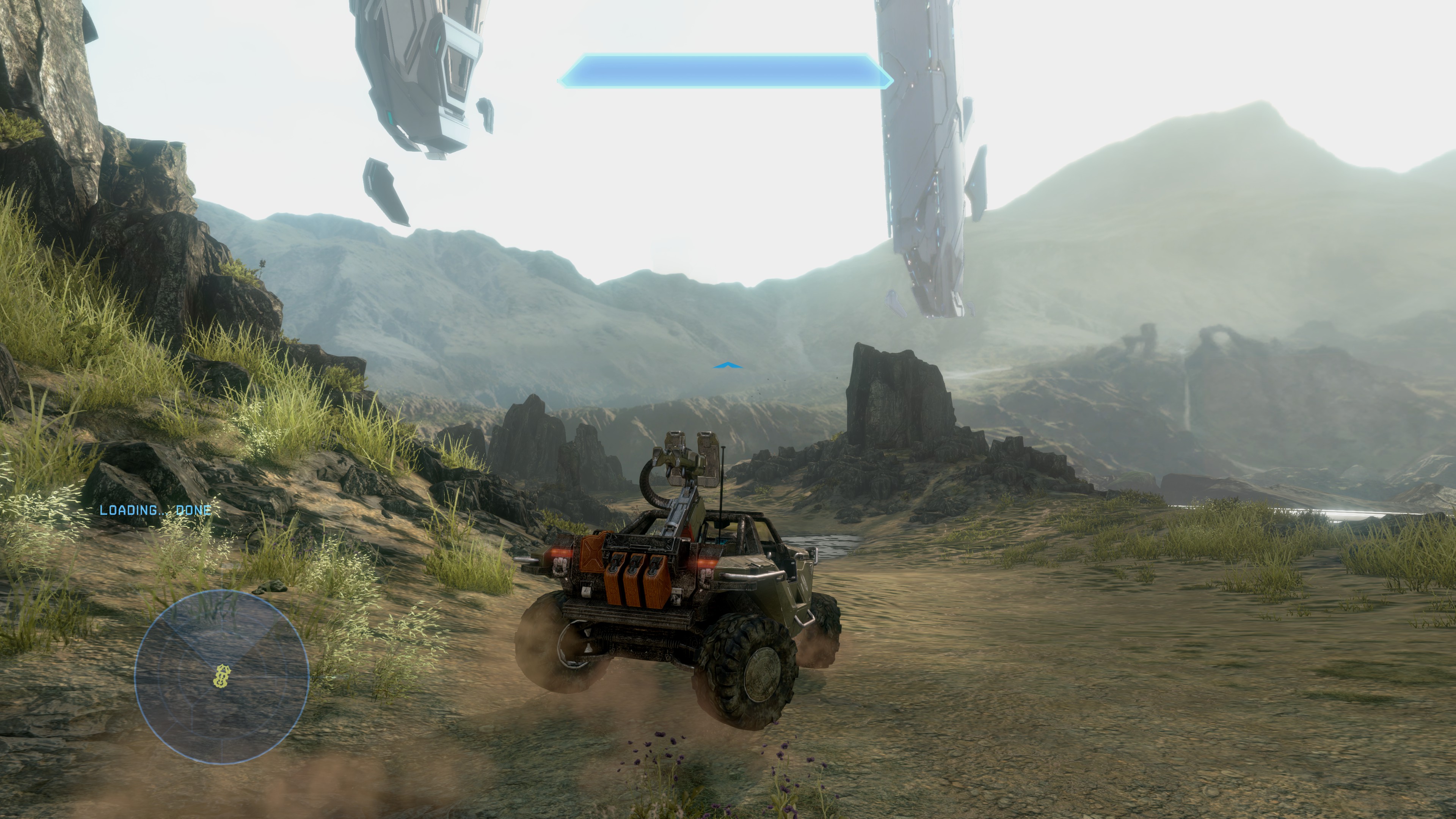 The broader arc of the story is typical Halo, which is to say extravagant space opera, increasingly impenetrable lore, and self-appointed gods who enjoy making tedious, meandering speeches about how they’re going to crush you puny humans. If this were all it was, it wouldn’t be remotely noteworthy. Yet threaded through the standard “Save the World” malarkey is a more involving personal story between Master Chief and Cortana. See, Chief’s trusty AI buddy is suffering from a condition known as Rampancy, basically the AI equivalent of Alzheimer’s disease, and Chief’s only chance of helping Cortana is to return to Earth, a difficult task when some mad wannabe deity is hellbent on destroying it.
This emotional arc is partly what rescues Halo 4 from being a nondescript entry in the franchise. It’s the first Halo game to convince me Chief is more than just a big dude in a cool suit, and its exploration of the mutual affection between Chief and Cortana is undeniably touching. That said, it is slightly undermined by the decision to give Cortana the physique of a burlesque dancer. As well as being a bit grotty, the naked objectification of Cortana flies in the face of the story’s general push to humanise both characters. 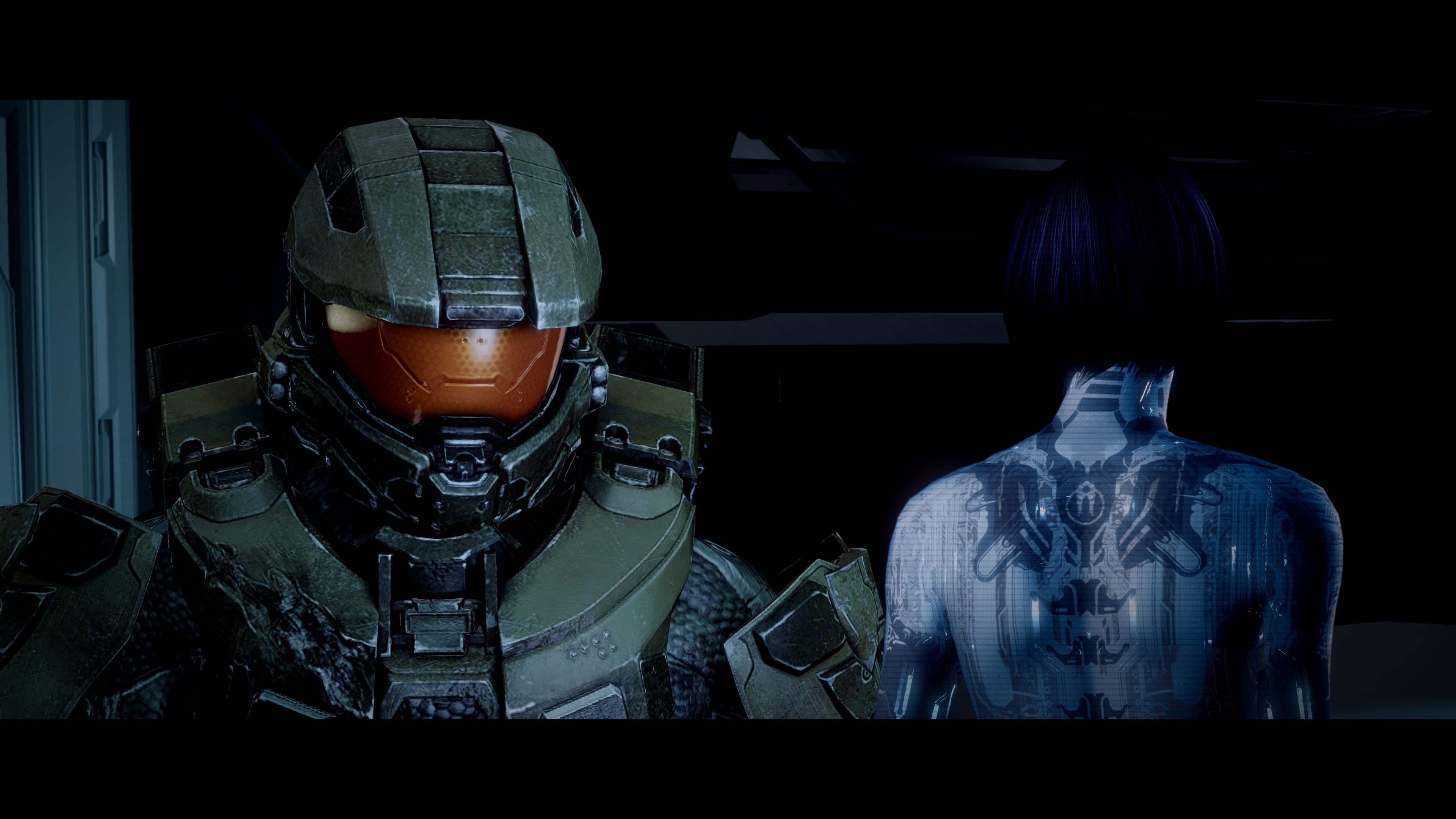 While the story is ultimately a mixed bag, 343 succeeds in dispersing it across a spectacular and varied campaign. The opening mission kicks things off with a bang, with Chief carving his way through Covenant forces as he attempts to escape what’s left of the Dawn, culminating in a brilliant Zero-G combat sequence on the exterior hull. The second mission is classic Halo, with you driving a Warthog across Requiem’s rugged terrain, which still looks mightily impressive despite approaching a decade in age. Other highlights include a mid-campaign mission where you escort a massive combat vehicle named the Mammoth through a desert canyon, and a defensive counter-assault on a space-station being attacked by Didact’s forces.
The campaign has its weaker moments, as I’ll discuss shortly, but even its worst missions are bolstered by Halo 4’s redesigned combat. While gunplay remains in the spirit of Halo, retaining its slightly inertial controls, there’s also more weight to the game’s general feel. Weapons have significantly more punch compared to previous titles, with both the Assault Rifle and Battle Rifle boasting improved audio/visual feedback. 343 also introduces an impressive array of new weapons. On the UNSC side, these include a semi-automatic DLR rifle, a heavy SAW machinegun, and a hugely powerful single-shot railgun. 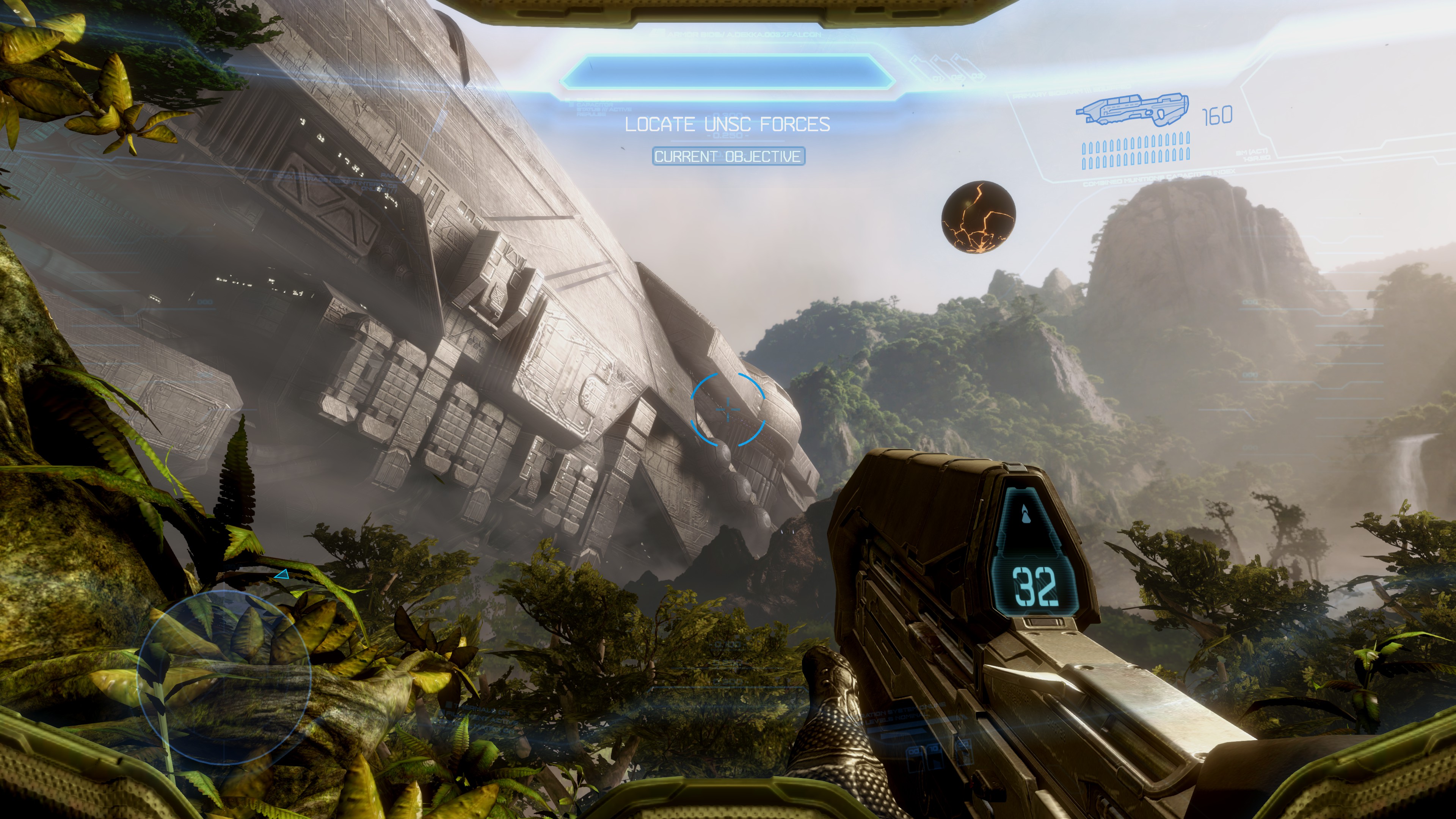 Most of the other new weapons come packaged with Halo 4’s new roster of enemies. Known as the Prometheans, the game explains these extra-terrestrial foes as physical manifestations of computer code. Apparently, this code has been optimised to be as generic as possible.
Sadly, the Prometheans are not Halo 4’s strong point. They have nothing of the character of the Covenant or even the Flood, and while I quite enjoy the way the robot-dog enemies burst when killed, generally the Prometheans aren’t much fun to fight either. The main culprit is a floating drone that can resurrect dead enemies, killing which is like trying to shoot down a particularly stubborn bluebottle. The fact that some enemies can teleport in a way easily mistaken for death also doesn’t help engender them to the player.
Away from the campaign, multiplayer is inevitably influenced by Call of Duty’s enormous success between the launches of Halos 3 and 4. There’s a greater focus on loadouts and progression, with ranks unlocking new weapons, perks and so forth. It’s an adequate offering, but in this more serious, competitive form, Halo loses some of the knockabout fun of its earlier multiplayer offerings. There’s less room here for goofing around in a Warthog, or hanging back in some far corner of the map trying to snipe players out of their Banshees. 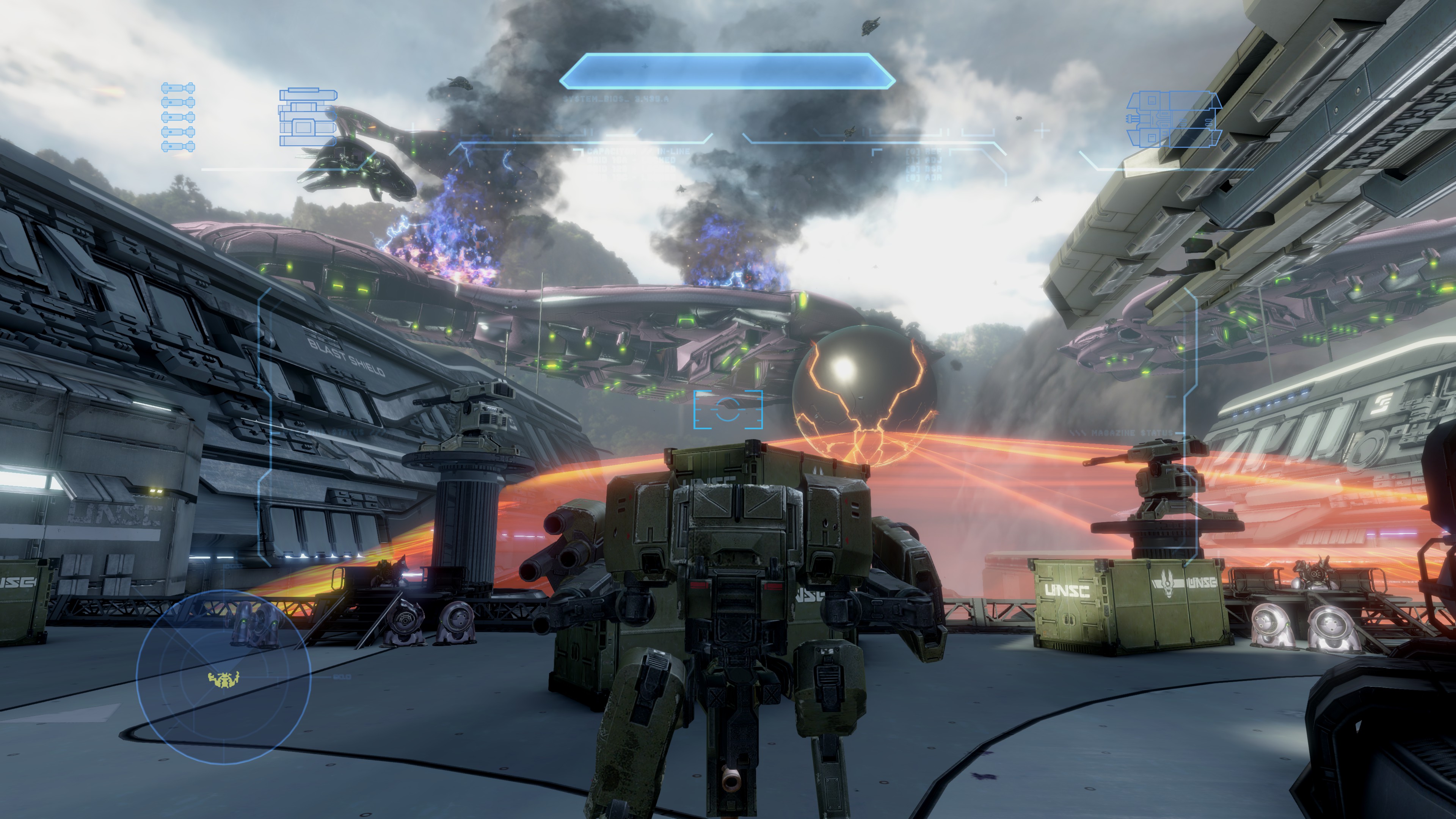 Halo 4 makes a more meaningful contribution to multiplayer in the form of Spartan Ops. An expansive cooperative mode, Spartan Ops sees up to four players band together as “Spartan 4” soldiers on a mission that takes place after the events of the main campaign. With 10 chapters each broken up into multiple missions, it’s a decent co-op affair, although it tends to emphasise quantity over quality, with some missions feeling very similar to others, and most of the actual story taking place in a handful of cutscenes outside of the actual game.
Halo 4’s co-op offering may pale in comparison that which you get in Destiny, but considering the game as a whole, Halo 4 is not a bad offering by any means. 343 find a respectable middle ground between modernising Halo and remaining true to the original’s spirit, and while it may not be the premiere example of Master Chief’s adventures, if you’re hankering for a no-nonsense, linear FPS, you could certainly do far worse. 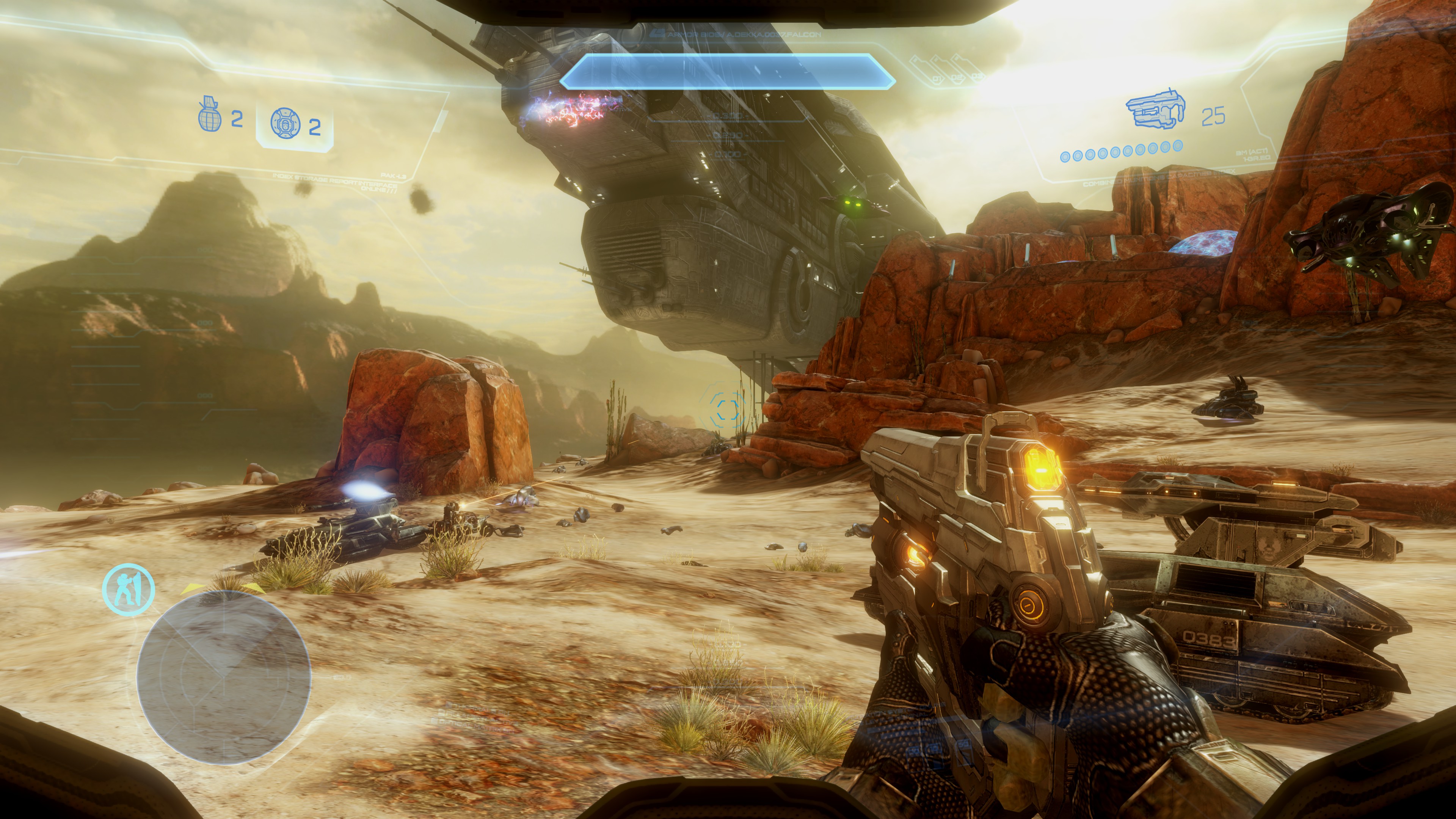