This is another area where Grow Home excels, it provides a real sense of achievement in its dizzying climb. The game is almost entirely vertical. The only horizontal surfaces are two large and a couple of dozen small islands floating in mid-air. Some of these are key to growing the plant. The plant's main stem is dotted with stamen-tipped shoots which Bud can trigger to grow, directing them toward floating islands glowing green with what I presume to be some kind of nutrient-rich fluid. Attaching these shoots to said islands cause the plant to grow another few hundred metres, enabling you to climb ever higher. I've always believed that climbing had the potential to be the centrepiece of an entire game rather than, say, a means of getting about as in Assassin's Creed or Dying Light, and Grow Home is the first game I've played to really grasp that. Not only are the climbing controls perfectly balanced between simplicity and engagement, but the game conveys a tremendous sense of height. As you reach further and further upward, the curvature of the planet becomes increasingly visible, the flora-rich floating island are dusted by snow, and the atmosphere thins until the stars poke through it. At one point I looked down at the ground, a hazy slab of green hundreds of feet below, and I realised it wasn't the ground at all, it was the second island up! The final ascent is also perfectly judged, neatly bringing the game full circle. Grow Home isn't entirely about the upward journey. It encourages a good deal of exploration as you ascend. Certain islands play home to teleportation units which, when activated, provide a speedy return to altitude should you fall off the plant. Meanwhile, sprinkled around the world are crystals that increase Bud's energy, unlocking new abilities, such as improved camera control and a jetpack that enables a little aerial manoeuvrability, useful for manoeuvring between different shoots. Bud can also make use of the flora itself. The plant's giant leaves act as springboards, while giant daisies can be plucked from the ground and deployed as makeshift parachutes.

That last point typifies Grow Home's tone. It's vibrant aesthetic is entrancingly cheerful, and the narrative is infused with a gentle, uplifting wit. M.O.M constantly updates Bud with messages of support, and occasionally drops a daft little joke. "That's really rather stunning!" she remarks when Bud finds a leaf he can use to glide around with. "I wish I had arms!" There are a few niggling issues. The shoots you can grow are a little awkward to control. They seem to seek out the nutrient-rich islands, but at least half of the islands aren't involved with the Star Plant's growth. Direct a shoot toward these, and they put up a bit of a fight. Also, early on the game encourages you to experiment with the various plants in the world, but only one or two actually do anything, and the designers make it fairly clear which plants these are. That's absolutely fine, Grow Home doesn't need any additional systems, but don't tell me to look for something that I'm never going to find.

As I said, these are tiny, unfertilised seeds of problems that never sprout into anything substantial. Indeed, Grow Home is almost worryingly close to perfect, one of those rare games where every system, every pixel, blends naturally into the next. A major contributing factor is it almost entirely devoid of fat. It's so refreshing to see a game that knows exactly what it wants to do, and commits to it fully without getting insecure and throwing in a bunch of arbitrary mechanics, or inflating the length past the point of it being entertaining. And this is from Ubisoft of all publishers, the undisputed champions of bloat. Grow Home is excellent. I can't make it any clearer. It's joyful, it's fulfilling, it's unique. Set aside five quid and one evening this week, and cultivate yourself a fantastic time. 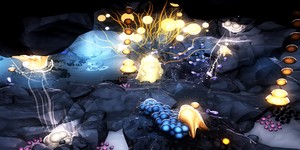