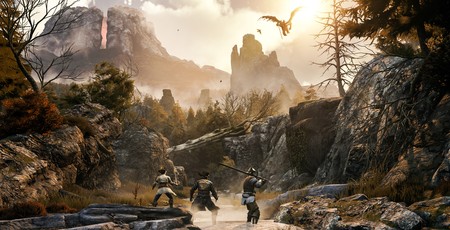 Greedfall always feels like it’s about to get going but never seems to actually get there. It’s a sprawling fantasy RPG that takes significant inspiration from Dragon Age: Inquisition, while borrowing bits of The Witcher, Dark Souls, and Dragon’s Dogma along the way. I want to like it more than I do. There’s nothing especially wrong with it, but there’s nothing truly right about it either. It does at least attempt to divert from the usual fantasy trappings, although this brings problems of its own. Rather than taking your typical late-medieval period and lobbing in some elves, Greedfall instead bases its world upon the age of sail (or, less euphemistically, the colonial era). You play the gender-flexible De Sardet, a diplomat for the Confederation of Merchants and cousin to the newly appointed Governor of New Serene, the Confederation’s city on the island of Teer Fradee. Rich in natural resources, this large, perpetually autumnal island has been colonised by several different factions, knotted together in a fragile alliance as they seek a cure for a plague known as the Malichor.

As they expand their territory, these factions come into frequent contact with the island’s native inhabitants, who aren’t too happy with the whole “bunch of foreign berks nicking our land” situation. Combined with the flaky nature of the three factions’ diplomatic ties, this results in constant skirmishes between all four groups. Everyone is on the brink of war, and you’re stuck right in the middle. It’s an interesting setting but also one that inevitably has some difficult politics to wade through. Greedfall does attempt to grapple with the issues that colonising an already inhabited island raises, and both your role as a diplomat and certain facts about your past factor significantly into this. Nonetheless, the game struggles to reconcile the fact that you belong to a faction which has landed on the island, building cities and taking resources, without permission. The effect is a bit like playing Dragon Age as some sort of high-ranking Darkspawn diplomat, trying to convince the heroes that actually you’re only invading their country to eat a little bit of their skin.

Frankly though, Greedfall’s storytelling problems stretch beyond the thematic, more of which I’ll explain later. For now, it’s worth talking about what Greedfall does right. Across the board, Greedfall represents a substantial improvement in the work of Spiders, a developer with ambition that has often outstretched its capability. Compared to games like the Technomancer and Of Orcs and Men, Greedfall is a far sleeker and more accessible game. Like Dragon Age, the game world is broken up into multiple large maps, which includes three sprawling cities (four if you include the introductory sequence), and large swathes of pretty countryside to roam. Indeed, my favourite moments playing Greedfall were venturing into the wilderness, following the trail of some lost expedition or tracking down a monster that had been harassing the area. The maps don’t have the visual variety of Inquisition or The Witcher, but they are nonetheless enticing places to explore.

As for what you do in these spaces, Greedfall doesn’t possess the same breadth of the RPGs it imitates, but it makes up for this in how deep many of its quests run. For example, a quest to reunite one of your companions with an old friend starts a chain of events that unravels a labyrinthine conspiracy about a phantom army company. In addition, most quests have several solutions. Some of these are familiar, such as talking or fighting your way out of a situation. But depending on how you build your character, you can disguise yourself in an appropriate uniform to access a restricted area, or use explosives to blow a hole in the wall. The way these solutions are deployed is not exactly subtle. Guards seem extremely prone to leaving keys lying around, for example. Still, it’s nice to have those options regardless. If all else fails, you can always break out the swords and spells. Greedfall’s combat is basically that of Dragon Age: Inquisition but with a greater emphasis on dodging. There are five areas of specialisation, including swords, bludgeoning weapons, pistols, alchemy, and magic, but you’ll probably want to put points into two or three skill trees. I invested primarily in swords while also using firearms for interrupting enemy attacks and whittling down armour (nearly all enemies have an armour rating which reduces damage taken until it is broken down).

It’s a workable combat system, but it’s also a bit flat. It has nice animations and decent audio design, but it lacks spectacle. Indeed, Greedfall’s cutscenes are often far more dynamic and entertaining than the actual game. Several times I watched a cutscene and thought, 'Oh man, I wish I could do that in a fight.' Sadly, it’s isn’t only combat that suffers from feeling slightly underbaked. Nearly everything Greedfall does has the same problem. The subsidiary systems like stealth and disguises technically work but only in a very rudimentary way. Sneaking through an enemy camp might be satisfying to pull off, but the act of sneaking is not very interesting. Even the environments, while gorgeous in the right light, are a similar shade of russet and sepia, lending the game a slightly depressive tone. Greedfall isn’t quite a brown game, but it isn’t as colourful as it feels like it should be.

I think the biggest problem Greedfall has is with characterisation, insofar as none of them are particularly memorable or interesting. The writing is functional but ponderous, as is the voice-acting.  De Sadet's primary characteristics seems to be politeness, beyond which he’s pretty much just a shell, while your party consists largely of archetypes. The grizzled soldier, the tattooed sailor, the feisty tribal woman. The writing really lacks a voice, a sense of its own character and of those within the story itself. Consequently, while Greedfall is often interesting, it’s rarely that entertaining. The quests are admirable in the number of options they offer for resolutions, but it’s hard to get invested in their stories because of the lumpy, overlong dialogues where every character seems to need to say the same, obvious thing in a slightly different way. Then you might do a bit of basic sneaking, or have a fight that looks quite nice but you feel oddly disconnected from, all while the plot rumbles on in a way that gives you plenty of stuff to do but seems to have no arc to it whatsoever. Toward the end of Greedfall, the story finally begins to ratchet up the stakes and the tension, but it also makes you wonder what you’ve been doing for the last 25 hours.

Although it looks the part in places, Greedfall really isn’t in the same league as your Dragon Ages or your Witchers. As I said earlier, however, it is nonetheless a big improvement upon Spiders’ previous work, and the first game it's made where I feel like the studio could make something truly great. Everything in Greedfall works, it just needs more depth to the systems, more snap to the combat, and more life to the script. In other words, I’d keep a very close eye on Greedfall 2: Greed Harder.