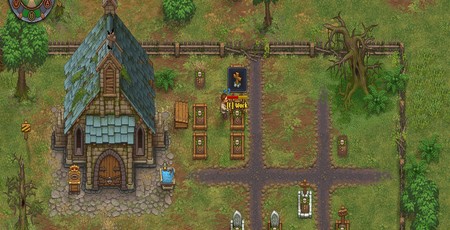 I love a management sim with a macabre twist. Dungeon Keeper, Evil Genius, and Ghost Master all haunt the ranks of my favourite games. So I only needed to hear the title of Graveyard Keeper to get excited. A Stardew Valley-esque management sim where instead of burying seeds to grow crops, you’re burying bodies to grow your bank account? Stop! That slapping sound you just heard? That was my money hitting you in the face. Now shut up and take it. What a shame, then, that Graveyard Keeper buries its thoroughly brilliant premise under a story that makes no sense, a questing system that is as convoluted as it is unnecessary, and the most headache-inducing progression structure I’ve encountered in years. It’s like developer Lazy Bear Games has gone out of its way to tank its own wonderful idea, like a dying billionaire accidentally sabotaging their own funeral by having the local church converted into a car-park.

What’s annoying is, this is a great idea, and Lazy Bear brings it about halfway to success. At the basic level, Graveyard Keeper requires you to bury bodies that arrive by cart from the local town. You take the body to the graveyard, select an empty plot, dig the grave, place the body, and then refill the hole. Each body you bury earns you a small amount of money, but it also means there’s gradually less space in your graveyard. Therefore, to keep earning money, you either need to expand the graveyard, or find alternate methods of corpse disposal, such as cremating them, or throwing them in the river. It’s a delightfully dark feedback loop to build a game around, and Graveyard Keeper expands on it in a couple of pleasing ways. As well as burying bodies, you need to tend the graveyard itself. This means repairing headstones and grave fences when damaged, and clearing the graveyard of weeds and other detritus. But having a respectable graveyard is also about the quality of corpse interred there. Laying people who led a good life to rest earns you prestige, but burying sinners will hit your Graveyard’s reputation hard. Consequently, you need to either avoiding burying sinners, or manipulate their sin rating by performing a little ad-hoc surgery (an odd mechanic, but a fun one).

Furthermore, being a glorified hole-digger doesn’t earn much money, so you’ll need to find alternative sources of income if you want to get anywhere fast. Again, you can do this by playing things straight, advancing up the church ranks and giving good enough sermons so that the townsfolk leave donations. Or you can opt for more nefarious income sources, such as selling corpse flesh to the local innkeeper to bake into his pies. All of this works superbly, and I love the juxtaposition between Graveyard Keeper’s cute JRPG-style visuals, and the pitch-black nature of its subject matter. The problem is that standing between you and your graveyard is a buzzing cartload of filler mechanics and nonsense faff.

Let’s start with the story, which I’m surprised is any more involved than 'You’re the Graveyard Keeper, please keep the graveyard.' Apparently that would have been way too simple for Lazy Bear. Instead, your character is killed in a car accident at the game’s commencement, after which you’re transported to a medieval-ish realm that I assume represents the afterlife, where you’re given the job of Graveyard Keeper for MYSTERIOUS REASONS and must find your way back home, while also keeping the graveyard. If you’re like me, you’ll have multiple questions such as 'What?' and also 'Why?' Why does an afterlife need a graveyard? Do people still die in the afterlife? Is there an after-afterlife? Do people die in that too, and get transported to the after-after-afterlife? It’s downright bizarre. I can only assume that the story is structured this way to justify the cod-fantasy setting, featuring a host of eclectic NPCs include a talking skull and a talking donkey. But you could have that fantasy element without the tedious 'is it a dream or a coma or a drug trip gone wrong?' plot device.

It’s also completely unnecessary, distracting from the subject matter of Graveyard Keeper far more than it contributes. Sadly, it’s not the only area where Graveyard Keeper does this. The game also features quests, some of which are related to the job of Graveyard Keeping, most of which are not. Like the story, most of these quests are unnecessarily convoluted. Characters will only appear on certain days in the week, so you need to wait around or find other things to do before you can speak to them, while there are often other obstacles to your progress, some of which are quite literal. Many paths in the game world are initially blocked off due to cave-ins and landslides. By far the worst offender in Graveyard Keeper’s design philosophy of 'let’s make everything ludicrously complicated' is the crafting system. Oh my lord, the crafting system. Here’s how you make a wooden cross, which is one of the most basic items in the game. First of all, you need to chop down a tree to get a log, then turn that log into planks. But hold on! Before you can do that, you’ll need to build a sawhorse to turn that log into flitch, which you can build out of sticks, and a carpenter's workbench to turn that flitch into planks. But to build a workbench, you need flitch and iron parts, which you can get by building a furnace and smelting some iron ore, and then building a wooden anvil to turn that smelted iron into iron parts. But to build a furnace, you’ll need flitch, some stone, and…iron parts?!

See what I mean about headache-inducing? And I haven’t even mentioned the fact that many of these structures first require you to unlock them from a tech-tree so twisted and gnarled it wouldn’t seem out of place in Norse mythology. Or that these can only be unlocked using three different kinds of skill points which are each earned by doing different tasks that seem to have no logic behind which or how many skill points they provide. OR that every action you take depletes a stamina bar that, when empty, prevents you from doing any further tasks unless you either go to bed or eat some food. I mean, Jesus tapdancing Christ, Graveyard Keeper makes No Man’s Sky’s crafting system look like a toddler’s jigsaw puzzle. The upshot of this is that trying to make any progress in Graveyard Keeper is like playing twelve-dimensional chess. I spent my first three hours with the game figuring out what I couldn’t do yet, because I hadn’t unlocked this skill or crafted that item or harvested that resource. When all you’re doing is bouncing off different parts of the game going 'Nope, can’t do that yet!', it’s indicative of really poor design.

I desperately want to like Graveyard Keeper, because I know there’s all kinds of cool and weird stuff that you can do in it, like alchemy and performing summoning rituals and building a tower of skulls. But it’s simply not worth trudging through the mountains of mechanical clutter to get to the point where you can play how you want. Ultimately, Graveyard Keeper digs a systemic hole it can’t climb out of, and any potential the game has ends up buried alive.