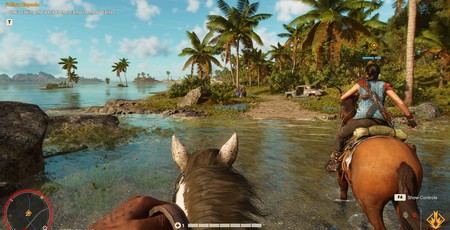 Strap me to a chair and slide something thin and sharp beneath my fingernails, and I'd confess that Far Cry 6 is a slightly better game than Far Cry 5. I wouldn't be entirely sure why, however, because the two games are virtually identical. Far Cry 6 still an absurdly large open-world shooter about capturing checkpoints and murdering wildlife. It still has wonderful gunplay and emergent systems that feel increasingly sidelined by Ubisoft's obsession with stuffing maps full of icons. The story is still a nonsensical and somewhat tasteless charade that ties itself in knots trying to be simultaneously a serious tale of revolution and goofy, knockabout action schlock. I can count the number of genuinely new features on one hand, most of which don't really work.

But beneath all the map icons and cryptic upgrade systems and endless crafting resources is a game that can, when pushed, produced moments of magic. It's by no means the best game in the series, and there are elements of it that I actively despise. But if you put Far Crys 5 and 6 in front of me and asked me which one I wanted to play, I'd pick this one without a moment's hesitation. 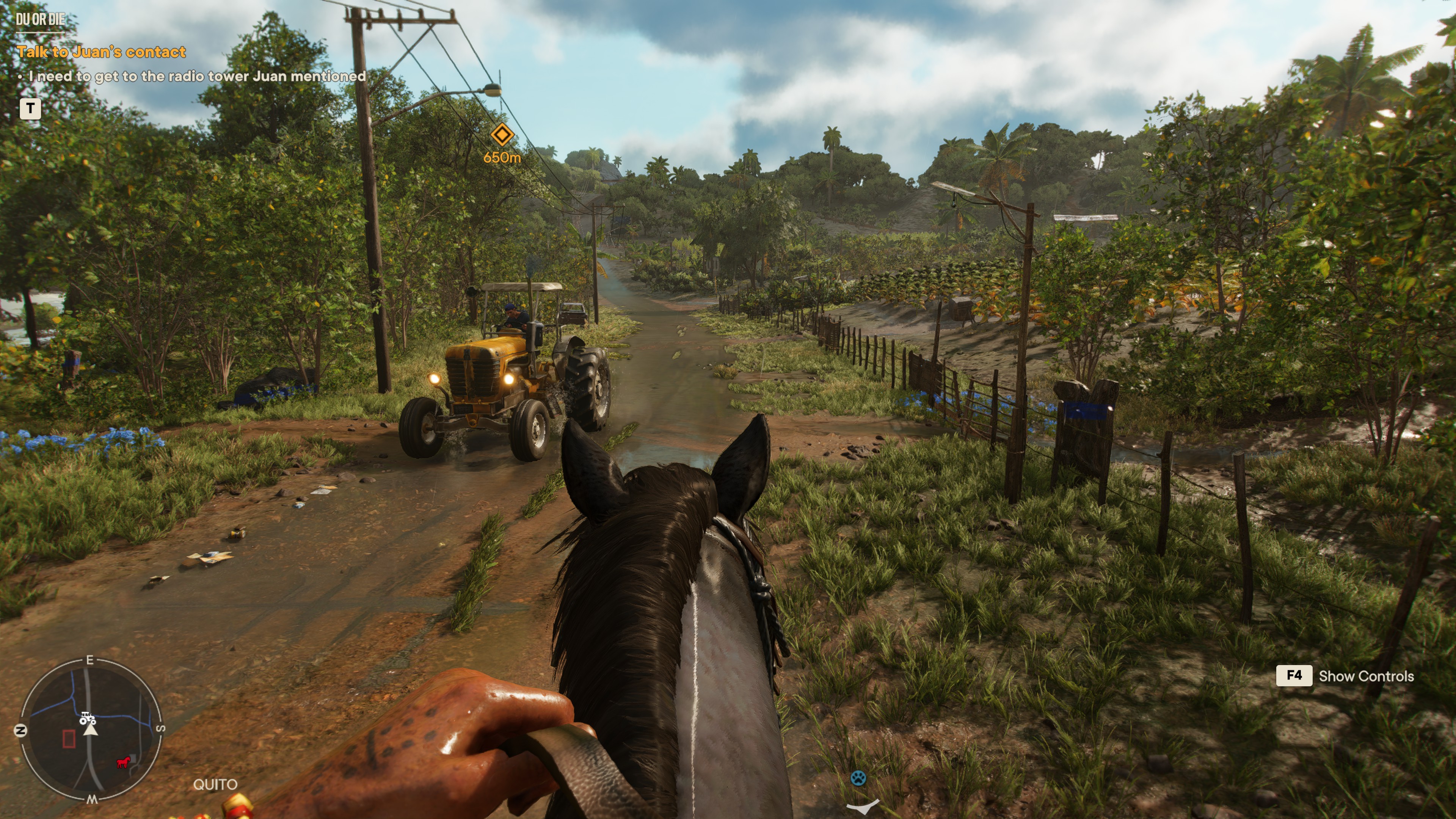 If you know one thing about Far Cry 6, it's probably that Giancarlo Esposito is in it. The veteran actor who played the laconic and sinister Gus Fring in Breaking Bad assumes the role of the slightly less laconic and slightly more sinister Anton Castillo, dictator of the island of Yara. He's the man who you, as the optionally gendered Dany Rojas, formerly a conscript in Yara's military and now a budding guerrilla fighter, will seek to topple over the course of the next 30-50 hours.

Far Cry 6's actual plot involves some utter cobblers about a special form of tobacco that cures cancer, but requires an especially toxic type of fertiliser to grow. It's probably the least engaged I've been by a Far Cry plot (which weren't exactly gripping to start with). Ultimately, all you need to know is that Anton Castillo is bad and needs to die, as do his three top lieutenants who each control one of Yara's sprawling provinces. You need to undermine the lieutenant's military grip on these provinces by capturing road checkpoints, sabotaging military installations, blowing up anti-aircraft turrets so you can fly freely around, and uniting Yara's fragmented guerrilla factions through completing story missions.

Guerrilla warfare is the primary theme of Far Cry 6, as well as the source of its few new ideas. The island of Yara is threaded with hidden guerrilla footpaths, winding dirt tracks flanked by blue flowers that let you safely traverse the island away from the prying eyes of Castillo's goons. I like the idea of using the jungle to your advantage, and the pathways are fun to navigate, often involving a mixture of horseback riding, first-person-platforming, and climbing sheer cliff faces using a grappling hook. 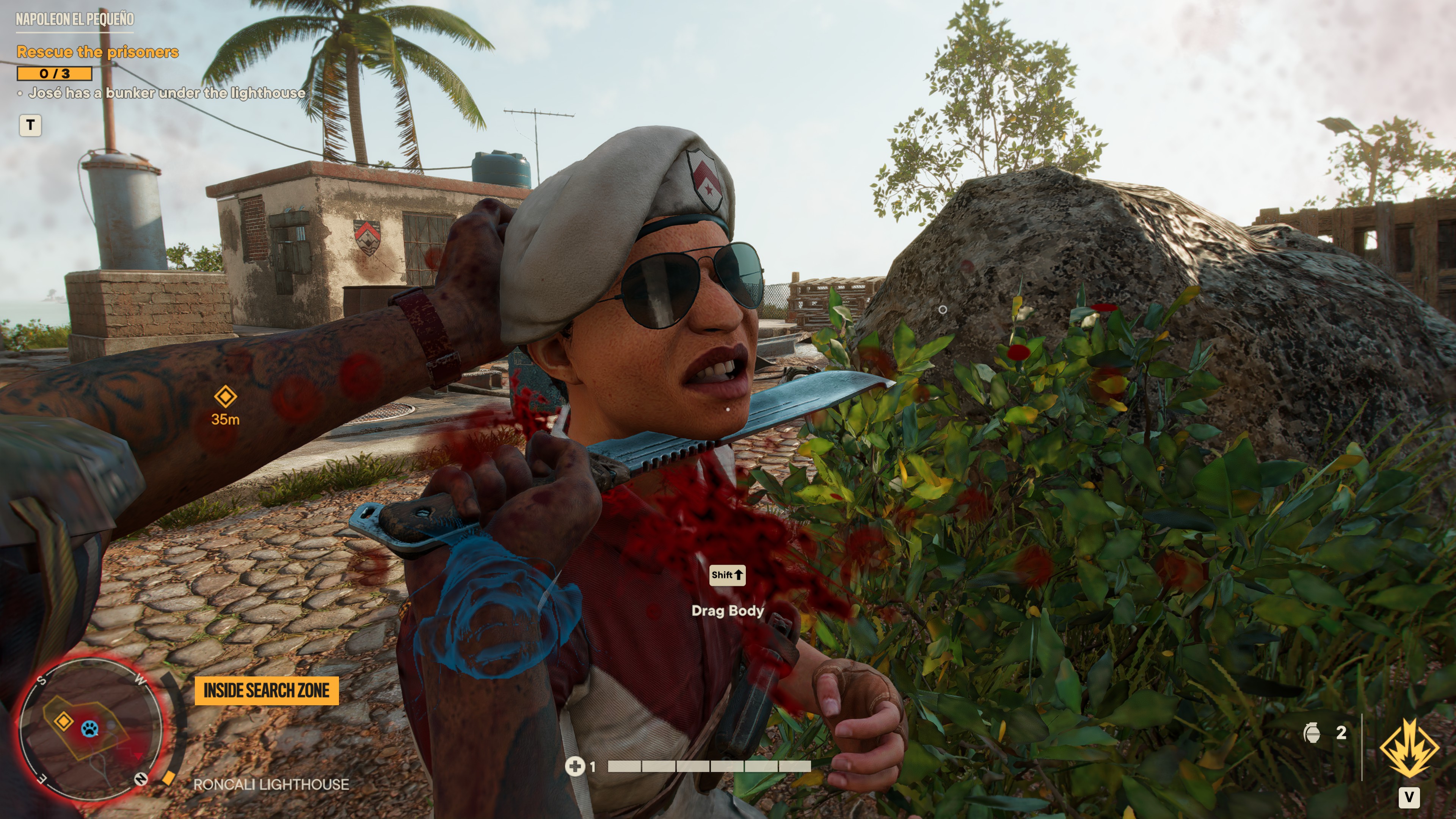 Unfortunately, Far Cry 6 also introduces the ability to walk freely around towns and roads simply by holstering your weapon, whereupon guards won't bother you unless you get in their faces. It's admittedly a useful ability, letting you walk right up to checkpoints and pop multiple guards in the noggin before they know what's happening. But it somewhat undermines the concept of striking hard and fast before melting away into the jungle.

I'm rather less enamoured with Far Cry 6's other guerrilla-inspired idea, namely the two new weapon types – 'Resolver' and 'Supremo'. The first of these are offbeat, ad-hoc weapons which are supposedly invented by your ingenious weaponsmith Juan Cortez. In practice, they're goofy to the point of being vulgar. The nailgun and the flamethrower aren't so bad. But there's also a gun that fires compact discs, and another that fires giant metal spikes like something out of Mad Max. They're too wilfully silly, feeling out of place in Yara's authentically landscaped world.

But Resolver are positively grounded compared to Supremo, an utterly absurd range of superpowered weapons slung over Dany's shoulders like a weaponised backpack. From a barrage of auto-targeting rockets to another that fires out a devastating ring of fire, they're one step away from "press to win" buttons, antithetical to Far Cry's ethos coming up with creative solutions to problems. It feels like something you'd get in Destiny, and I don't understand why it's here. 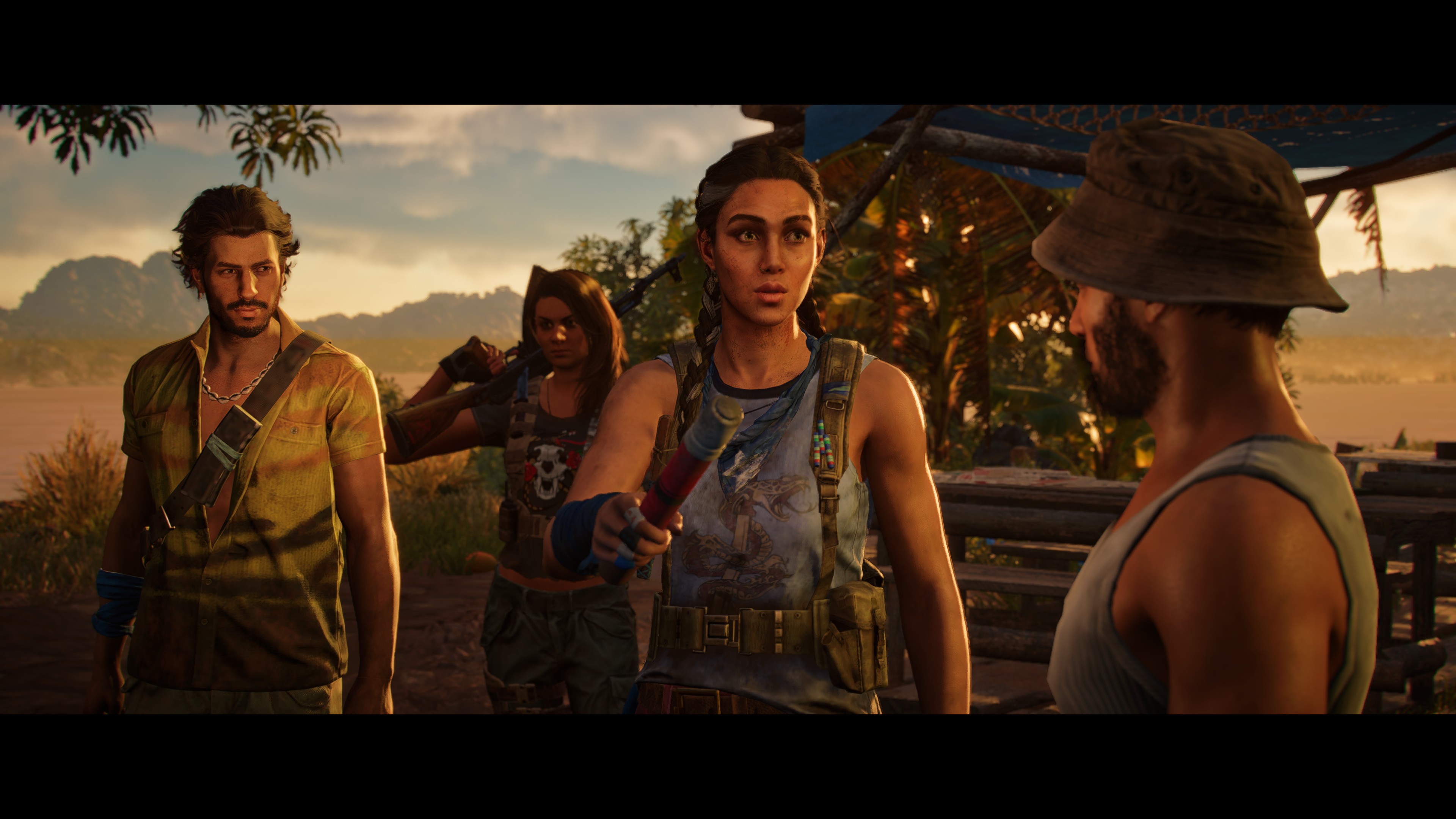 As daft and annoying as Resolver and Supremo are, beneath them is an enjoyable and smartly constructed open world FPS. Alongside the Resolver weapons are a wide range of highly modular guns and unique special weapons that let you outfit yourself for any situation. I tended to rock up to missions with an armour-piercing pistol that'd make shockingly quick work of enemies, an all-purpose sniper rifle for long distance engagements, and an incendiary shotgun that was great for setting off the game's liberally distributed explosives.

Far Cry 6 includes nearly all the dynamic systems the game has built up over the years, the result of which is that encounters regularly unfold in surprising and dramatic ways. In one example, I had to destroy a bunch of planes carrying the poisonous fertiliser used to grow Castillo's tobacco. But my attempt to sneak into the airstrip went awry, and the military sent in air support after me. I then had to climb into one of the planes I was sent to destroy to take down the enemy fighters, before then using that plane as a missile to destroy the remaining aircraft on the ground. It was fantastic.

Smaller encounters can unfold in surprising and hilarious ways too. On a random roadside, I encountered a soldier holding a rebel hostage. I directed my crocodile companion Guapo to maul the guard, but before he could get there, he was intercepted by some wandering wild dogs. As Guapo squared off with the mutts, the guard noticed the three dangerous animals and legged it. I then freed the hostage, only for them to run out into the road and be knocked down dead by a passing car.